Over the summer, central banks entered a ‘vicious cycle’ where dovish monetary policy action like cutting interest rates drove another major push lower in sovereign yields – such as US Treasuries and German Bunds.

With the European Central Bank (ECB) signaling its intent to ‘double down’ on quantitative easing (QE) and the Fed confirming its willingness to match market pricing for lower rates, Juliette Declercq of JDI Research explains how rational investors are jumping at what is thought to be one of the last opportunities to lock in the little positive yielding government debt left on the market.

This move was exacerbated particularly across Europe when the ECB’s Mario Draghi announced ‘QE-infinity’ at the September ECB meeting. 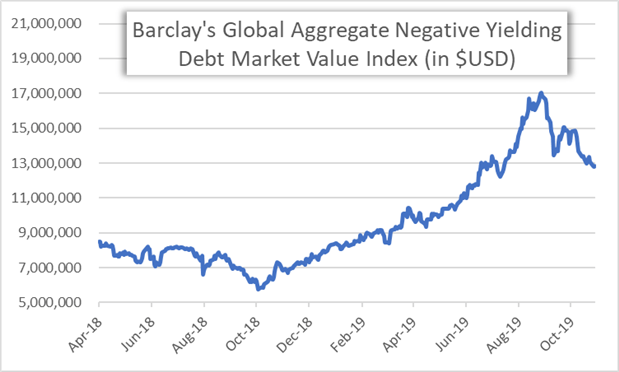 Consequently, there has been a huge explosion in the market value of negative yielding debt as investors chase yield (or lack thereof). Juliette discusses how dovish guidance from central banks are suggesting a continued move towards ZIRP and NIRP (i.e. zero and negative interest rate policy regimes), but the pivot by the Federal Reserve (Fed) this summer was quite significant.

This is considering the stark contrast between the Fed and other global central banks last year when the FOMC was tightening, but monetary policy now seems to be converging in light of the recent 75-basis points of Fed rate cuts. Though there is an issue with ZIRP and NIRP, explains Juliette, who explains how the unconventional tools employed by central banks recently can become contractionary – the opposite of what they intended.

This is because consumers are forced to put away more money due to lack of healthy returns historically provided by government bonds that have been popularly used for retirement savings. Moreover, the more you lower rates, then the more you need to lower rates due to its diminishing impact.