BITCOIN OUTLOOK: BTC PRICE VOLATILITY COULD BE OVERLOOKED AS CRYPTO MAY REPLACE GOLD

Raoul Paul of Real Vision holds an interview with founder and CEO of Digital Currency Group (DCG), Barry Silbert, who is a pioneer in the cryptocurrency market and digitalization of financial assets. Despite the series of booms and busts, the narrative around crypto regarding its future place within the global financial system remains unchanged after the price of bitcoin inked a parabolic surge throughout 2017.

Bitcoin and cryptocurrencies in general have already changed how investors think about the crypto asset class and not just for speculation, says Barry, but also for its store of value characteristics. Barry tells Raoul Paul his controversial opinion how he believes investors will replace gold in their portfolios with bitcoin over the next couple decades as the utility (i.e. benefits) of crypto trumps that of gold and other precious metals. Yet, others still argue how bullion remains attractive. 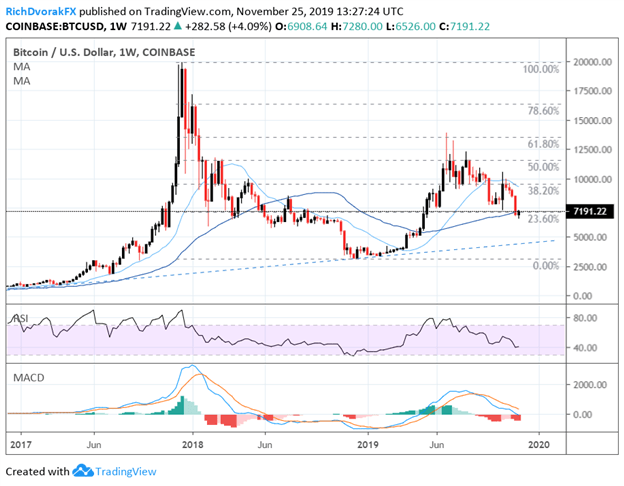 Chart created by @RickDvorakFX with TradingView

The market cap of Bitcoin has ballooned from a few billion dollars back in 2014 to the $130 billion total value of Bitcoin circulating currently. Barry, who was on the forefront of skyrocketing btc prices when the cryptocurrency was trading around $300, argues that the crypto asset class is here to stay in light of the growing financial infrastructure and global acceptance.

Bitcoin trading has become increasingly popular, for example, which has provided liquidity for the digital currency. In fact, cryptocurrency speculators will soon start to trade US regulated bitcoin derivatives such as futures and options contracts. The expanding financial infrastructure could facilitate access for additional traders to enter the crypto market and potentially open up the door to institutional investors. 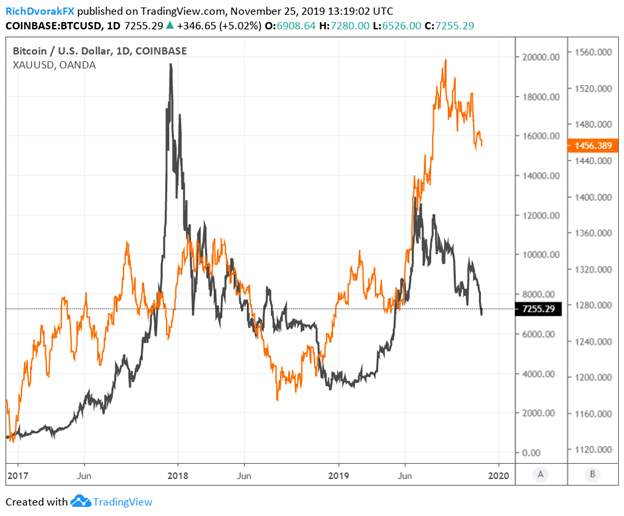 Chart created by @RickDvorakFX with TradingView

Yet, Barry points out that the crypto asset class journey is not straightforward. The use case for bitcoin and blockchain is still under development, but there is great potential to be unlocked. As such, the primary use case for bitcoin and crypto is speculation – that is not necessarily a bad thing. In order for bitcoin to reach its potential utility the size of the crypto asset class needs to continue to grow alongside expanding volume and velocity of transactions, which benefits from speculation.

This increases the liquidity of bitcoin as it is exchanged in and out of different currencies. Buying into the hypothesis that bitcoin will replace gold is the belief that there will be a convergence between the $8 trillion gold market and $125 billion bitcoin market. Bitcoin bulls are also betting on the possibility that substantial technological advancements might be made with blockchain technology, which could potentially become intertwined with the underpinnings of the global financial system. 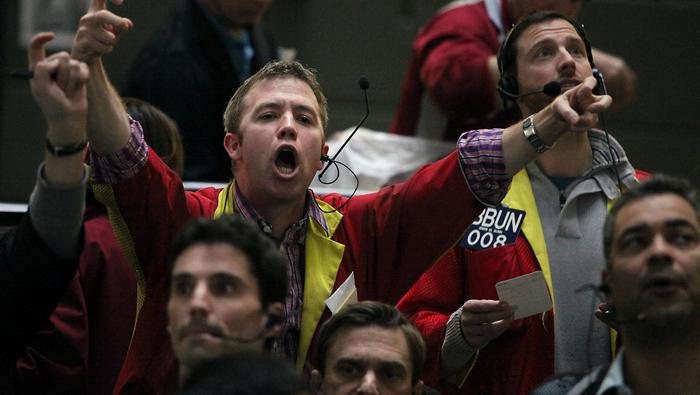 VIX: A Global Volatility Breakout Could Be Around the Corner