As the Dollar Hits a Two-Year High, Assessing its Drive

See the 1Q 2019 forecast that I wrote with Strategist James Stanley in the recently updated, quarterly forecasts on the DailyFX Trading Guides page.

The Dollar was difficult to gather a fundamental bead on this past year, and conditions are little different through the opening days of 2019. There was limited progress to point to through the liquidity drained first 48 hours of trade in the New Year, but the persistence of the benchmark currency's bullish course through this past session - despite traditional fundamental headwinds - offers some insight on the market's view of its fundamental backdrop. Where the DXY Dollar Index was starting to suffer a progressive course reversal through the start of this week, bearish traction was distinctly undermined Wednesday with one of the most robust single-day rallies for the measure in the past six months. As distinct as that particular measure's move was, however, it fell markedly short of the weight hefted by an equally-weighted measure of the Greenback. While nowhere near as ubiquitous as the recognizable ICE measure, an evenly distributed measure of the USD across its major counterparts covers a more uniform picture of the Dollar. With that said, my equal figure exhibited exceptional intraday volatility this past session without truly committing to a clear direction. Nonetheless, it hit its highest levels since early January 2017.

Favorite Tropes for the Greenback that Have Unmoored

If the Dollar - whether trade or equally-weighed - is going to forge the next stage of a larger bull trend, it will most likely do so with a solid fundamental footing to project the more difficult phase. Therein lies the trouble: many of its traditional roles are not supporting the climb thus far. If we are referring to its status as an absolute safe haven, there has actually been a notable relief rally in sentiment pacesetters like the S&P 500 over the past week. At the same time, the carry trade appeal in the currency is undermined by the months of broad 'risk' unwind whereby the USD has held a restrained but progressive advance. Monetary policy carries a related thread to speculative appetite as both an unreliable backbone of capital markets and the Fed's explicit drive to lead the world's largest central banks into normalization. That said, the forecast for the Fed Funds rate through the end of 2019 has dropped meaningfully over the past few months with the pace of increase predicted between the December and January 2019 contracts posting the sharpest retreat in many years for any comparable spread on the projected yield curve. Even a growth or relative growth appeal eludes the currency. The US 10-year Treasury yield has dropped to 12-month lows while an aggregate of sovereign government bond yields for the highest rated developed world economies have dropped with similar assurance. While most of these fundamental roles are not currently in charge of the USD's course, the range of its influence signals the value it can represent for the broader financial system. If, say, the Dollar were to surge because of an intense risk aversion; it could more readily signal a sweeping influence for the global markets that would suck in all other asset classes like a fundamental black hole. This sets the currency up to be just as substantial a signal over what can is motivating the financial system as it represents a cue for specific USD-based trade. 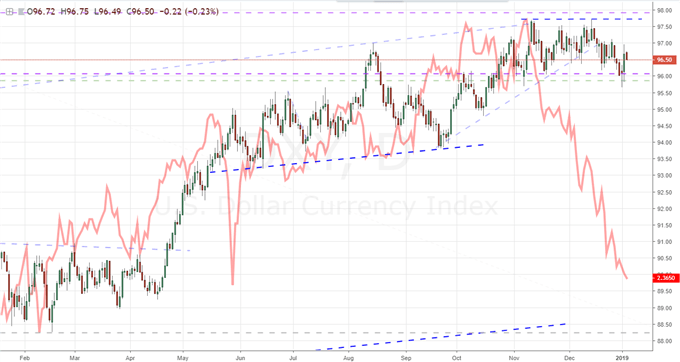 For Now, A Role as the Principle Alternative

Whether our intent is to gain a line on EURUSD or determine the state of global risk trends, it is important to establish the current fundamental drive behind the Dollar. As productive as the medium-term bearish course is and the intensity of the more recent jog higher in sentiment, there is little conviction behind a full-tilt drive in speculative appetite. The Fed's forecasts have clearly taken a steep dovish turn, but that hasn't rekindled broader appetite for dip buying nor has it led the currency to topple relative to its major counterparts. If neither risk trends nor monetary policy nor traditional growth considerations are robust enough to motivate the Dollar, they will certainly lack the influence necessary to reliably carry global sentiment. That is not to say one of these currents won't eventually take over, but at present they haven't set deep enough roots. So if none of these dominant trends are currently in play, where is the USD drawing its motivation? Perhaps as an alternative to a variety of fundamentally-afflicted, major counterparts. The political troubles of the Eurozone, constant trouble on Brexit and a U-turn on Bank of Canada monetary policy have rendered serious troubled for a range of counterparts. If we are looking for more liquidity, there is only one currency higher on the totem than all of the relevant majors. How long does this motivation last though? The answer to that question can provide a crucial view of our entire financial system. We focus on the Dollar in today's Quick Take video. 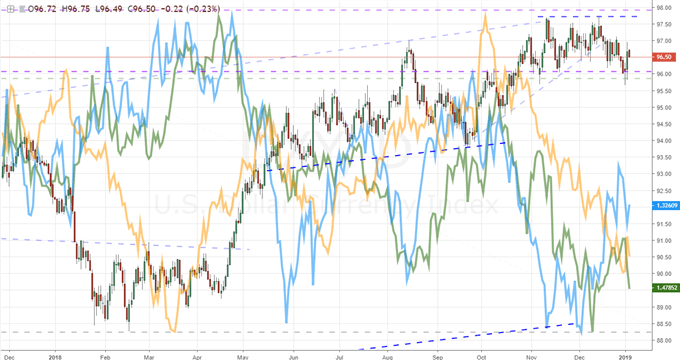