Why the Fed Won’t Relent to Trump’s Calls to Hike Rates, But the Market...

US President Donald Trump has made little effort to hide his opinion when it comes to the Federal Reserve's monetary policy efforts. Attempting to marshal a trade war against the world's second largest economy and seeing the deficit grow to record levels on the back of a tax cut, the 'leader of the free world' could use the support afforded by an extremely accommodative central bank policy. Instead, the Federal Reserve continues to push forward with the most hawkish policy effort of its peers with an anticipated fourth quarter-percent hike from the group to round out the year. Recognizing the pressure this is affording his cause, the President reiterated his concern this past session. In a tweet, Trump said the Fed should "take the victory" and pull back from its hawkish drive. He assessed that the Dollar was strong (that is true), there is "virtually no inflation" (dubious) and the rest of the world was exploding (a serious stretch). This warning was followed by the President's chief trade strategist Peter Navarro stating that the Federal Reserve was the greatest threat to US growth. This effort is not exactly surprising as the administration has stated its concern and displeasure, but recognizing their lack of options to effect influence, they have instead turned to issuing warnings. One way or the other, Trump has certainly drawn the market's attention.

Why the Fed Is Unlikely to Bow to the Pressure

As much as the President - and his Trade Secretary, trade strategist, commerce secretary and various other officials - dislikes the Fed's tightening policy, he has little actual recourse to influence the central bank. The institution was established explicitly independent of the executive and other branches of government such that their term-based interests do not spill into the long-term objectives of the Fed. Some would say that Chairman Jerome Powell and his colleagues are acting directly against Trump as a means of defiance, but that is unlikely. Rather the group is more likely overlooking his appraisal of the situation to concentrate on their meticulously laid out plan. The central bank says that it is responding explicitly to its dual mandate - inflation and employment - but it is more likely attempting to reset its position from an extreme exposure. There are detriments from holding policy settings at the extreme of accommodation for too long. Aside from the implications for raising inflation pressures, it leaves little buffer to fight future financial and economic fires - not a small thing for a group that played a crucial role in saving the US and global financial systems back in 2008. More pressingly, if the Fed were to alter its position now, it would likely raise more flags from the markets than if it just pushed ahead with its steady pace of hikes. Fed Funds futures are still pricing in over 70 percent probability of a hike Wednesday which means that a hold would catch the market off guard. That may seem a small thing until we consider that such a move could raise the question: 'what is the central bank so afraid of that it decided to reverse course on its supposedly health policy path?' 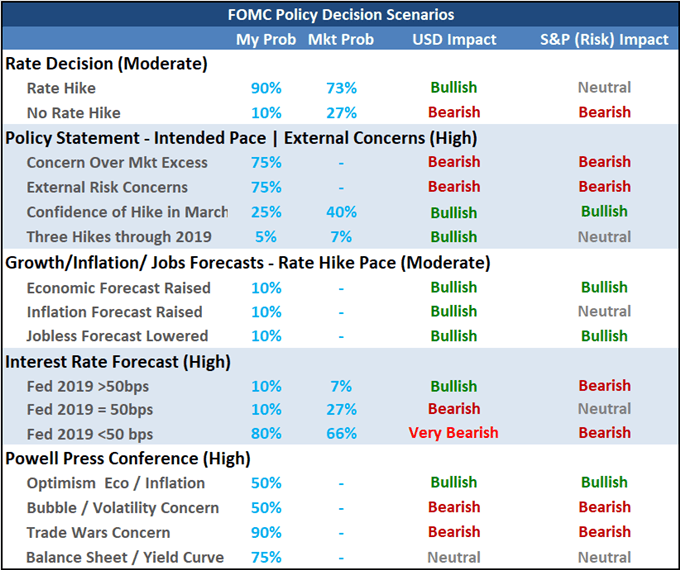 A More Effective Motivator to Change the Central Bank's Mind

While most would point to the Fed's rate hikes these past few years and in-tune Fed watcher may even point to the balance sheet reduction program, the true benchmark on policy for the world's largest central bank is forward guidance. This serves a crucial utility: setting market expectations on future changes in monetary policy translates to meaningfully walking back extreme accommodation without triggering a sense of fear that a critical pillar of speculative activity was falling away. In this steady path towards rebalancing, we have yet to see the central bank seriously deviate from the forecasts it has promoted. Would it run that risk on such a closely watched rate decision? Now, just because the government may not hold the greatest capacity to sway the Fed, doesn't mean the group is married to its course. Naturally, a rise in the unemployment rate or drop in inflation pressures would offer the group an overt opportunity to alter its trajectory, there is a more volatile and unspoken component that can turn the tides: financial market stability. The group has systemically altered course owing to a rise in volatility and slump in capital markets tied to wealth in the past. That will inevitably be true in the future as well. We discuss the outlier possibility that the Fed surprising the market with a hold at this upcoming meeting in today's Quick Take Video. 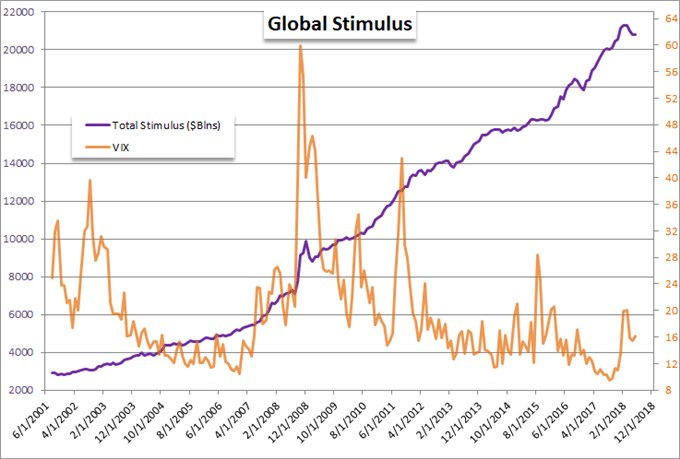