See how retail traders are positioning in USD/CAD - as well as other majors, global indices and commodities -using the DailyFX speculative positioning data on the sentiment page.

There is little chance that the Bank of Canada (BoC) will change its benchmark rate at its monetary policy gathering Wednesday - that much is clear from overnight swaps. However, that does not mean that the event does not have the capacity to move the markets. In fact, the details matter profoundly for the Canadian Dollar as the policy bearings from the policy authority have swing dramatically through 2018. We can see much of that influence in the wholesale shift in bearing and activity from the Canadian currency across the board on an equally-weighted indexed basis. Through the open of the year, we had a heavy bearish drive for the Loonie through mid-March that was the culmination of fading event risk and rhetoric for rate speculation alongside trouble in NAFTA negotiations and the rise of tariff pressures from the United States. After the productive slide, conditions started to normalize and even improve to put put the currency in more of a position whereby it could be described as trading at a discount. A speculative and fundamental recovery began from that point which lead to the recent highs that we hit earlier this month. Yet again, we seem to have overshot the practical outlook as circumstances have faded once again. Perfect timing for this policy update. 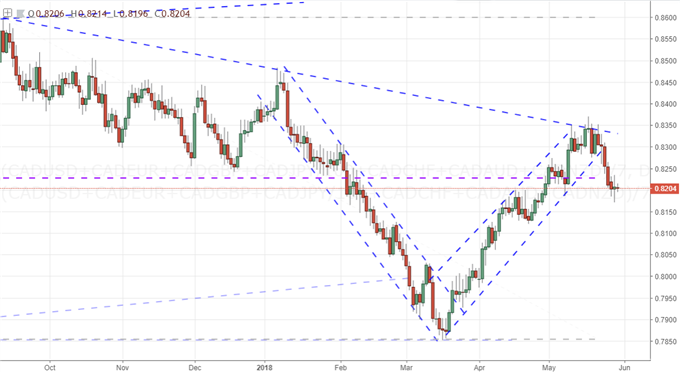 The BoC's rate decision is due at 14:00 GMT. As mentioned above, the probability of a hike from the group at this particular meeting is registering (a generous) 16 percent probability according to swaps. A move more pratically speaking is considered highly unlikely in trading cicles. The focus was instead on the details that came alongside the decision to hold. The rhetoric was going to be processed and condensed for the particular signs on the group's intentions six months ahead, 12 months ahead and beyond. The central bank has been rather open with its bias over the past year. In the second half of 2017, the BoC was explicit with its rate hikes and its language which was interpretted as a possible jump start to an aggressive rate hike pace that could give the Fed a run for its money. Yet, that enthusiasm waned and we have seen the group just as readily project its skepticism and 'dovish for longer' intentions over the past quarter. Market participants will look for the same candor in evaluating their FX views Wednesday. 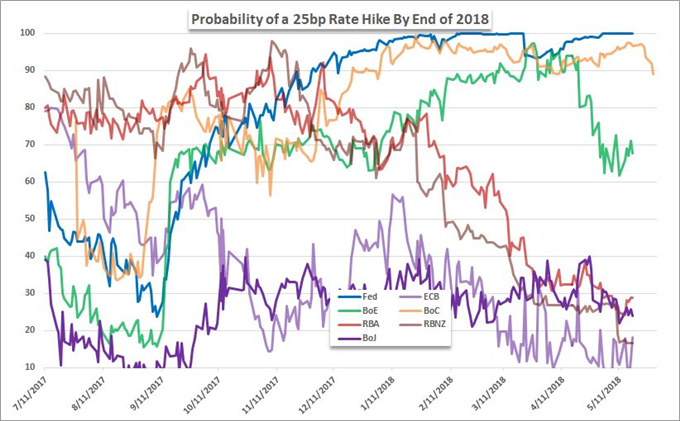 The current bearing for any policy authority or even any broad event risk or theme matters little without the context to benchmark anticipation. We should practice the same appreciation for the BoC's policy decision. For the reference to its own monetary policy bearings, we have a significant swing from upstart hawk in 2017 to familiar pain-management across the board in 2018. Reinforcing a failed effort to turn a corner on a dovish policy can hurt more than never having made the attempt to exit. In the global context, the BoC is not unique. We have seen a downshift in policy views across the board - both from the central banks' and market's perspective. Yet, as we have seen from the Euro and Pound, the belief that a currency is moving up the monetary policy standing scale only to have those expectations crushed has a particularly intense influence on performance moving forward. If it is clear that the BoC is more like the BoJ than the Fed, the market may judge the Loonie harshly. 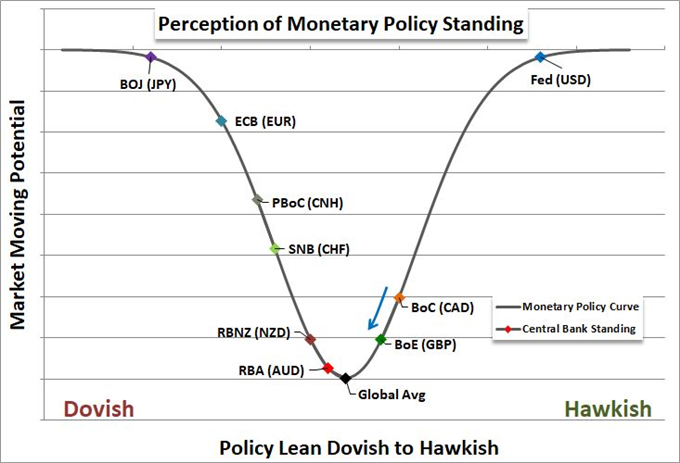 A Skew in the Possible Outcomes

As with any event or theme that has yet to transpire, there is a mixture of probability and potential between various possible outcomes that in turn generate a specific market reponse. Starting from the more improbable, a hawkish outcome for the BoC event is less likely and carries far more restrained potential over the Canadian Dollar should it be realized. The swaps market's probability of a hike at this gathering is more likely a hold over of the confidence in months earlier in the year. If Governor Poloz and company decide to deliver a hawkish surprise, it would certainly catch the market off guard and lead to a short-term charge for the Loonie. Yet, this last minute and unexpected change in tack comes in an environment where rate expectations have dropped materially for most of its peers, so the move would be evaluated with a heavy dose of concern. To get the most movement out of the move, it would be best to pair the surprise reaction to a currency that has more recently found itself facing doubt - like EUR/CAD. Alternatively, a dovish outcome - whereby the BoC relinquishes all practical claims to pursuing hikes - is clearly the leading forecast but caters to effective concerns for the wider market. That said, the Canaidn currency has lost significant ground across many counteprarts this past week and longer for some, so a counterpart needs to be chosen carefully. USD/CAD looks appealing on a technical basis, but CAD/CHF may offer the most uncomplicated fundamental backdrop. We consider the detail and importance of the BoC rate decision in today's Quick Take video. 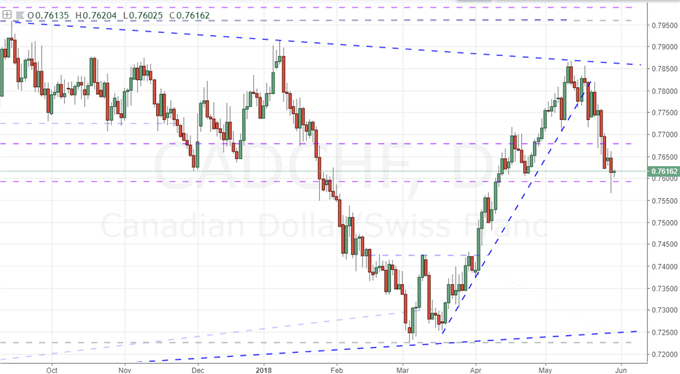