Speculative appetite is generally an overriding theme – when the theme is both present and dominant. While I believe the existential battle between ‘risk on’ and ‘risk off’ can readily take over the market’s bearings, we seem to be lacking the self-sustaining cycle that would simply metabolize all supportive event risk (depending on the bullish or bearish bearing) while casting off the unfavorable news at is crossed the wires. It is only a matter of time until we get back into a ‘sentiment-first’ market regime; but for now, we seem to once again find ourselves dependent on fundamental feedback. While this past session’s ECB rate hike and Fed Chairman Powell’s inflation warnings may resonate with recent trends, it seems not to upend the speculative skew solidified in the market. Looking to the S&P 500 as a proxy, concern around the fallout of aggressive global monetary policy tightening, ever-present recession fears and increasingly-practical financial crises arising from distortions like the Dollar’s multi-decade highs don’t seem to be throwing the markets off course. I would not count on this confidence to always holdout… 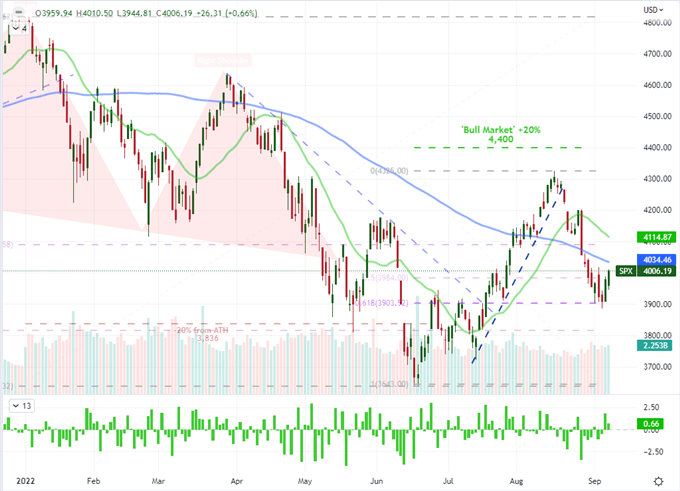 While there was a broad bounce in ‘risk’ oriented assets this past session, it looks to be far from the scale of move that I would say represents convictions. Correlation is one of my principal measures of sentiment, but the other consideration is the persistence of trend for which we seem to have little guidance as of yet. In the meantime, there is a persistent fundamental wind backing the charge from the US Dollar. This past session, the top event risk was the ECB (European Central Bank) rate decision. The 75bp hike was no small feat given it is the biggest move in over two decades and materially moves up the bottom of the interest range spectrum. This is a significant development for rates watchers as the second largest developed world central bank has thrown in for a focus on inflation, which in turn leaves off another key player as a backstop for any rampant speculators. Taking a look at the market’s response to the big hike from the lagging policy authority, EURUSD has ultimately struggled to make a move to break back above parity (1.000). this is a very symbolic line in the said, but it is also where the heaviest fundamental lines converge. 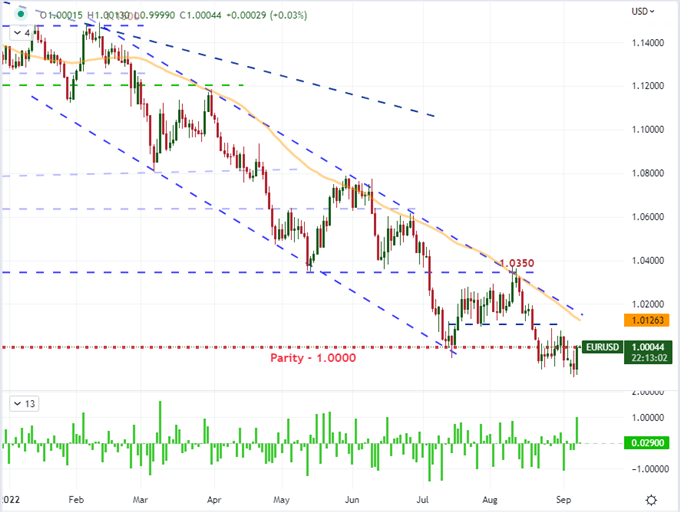 The Dollar and Its Motivations

When looking at a pair like EURUSD, it is natural to assume that the ECB rate decision this past session was a principal motivator for price action. However, the aggressive hike the group announced didn’t see to lift the Dollar (sink EURUSD) in a meaningful way this past session. We could argue that this anchored reaction is owing to the same advanced discount effort that we’ve seen with the Bank of Canada (BOC) and Reserve Bank of Australia (RBA) previously this week. To be fair, the ECB’s views via Lagarde and counterparts was more opaque than, say, the US authority. There are some notably Fed speakers on tap for Friday, but my skepticism of a late-in-the week; runs high. With the DXY Dollar Index standing on the cusp of a fresh multi-decade high, sources of conviction become even more important to harvest. 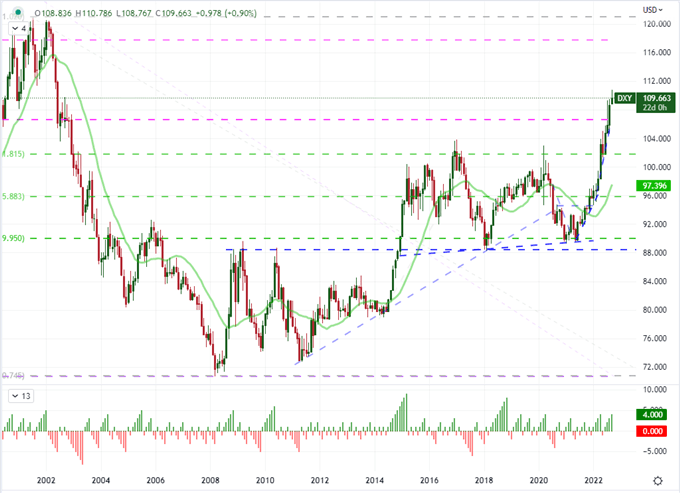 Seeing a technical break form a benchmark like the DYX would be convenient, but it is more than systemic matters – such as scheduled event risk – that would produce the kind of development that evolves into a meaningful market move. For the US currency, I believe there are various fundamental influences playing a role that is ultimately throttling the Greenback. Where relative growth forecast favor the US and interest rate forecasts are underway, there is the early vestiges of speculative opportunism from those that prefer to evaluate the fool’s errand of picking pick tops and bottoms

Chart of Effective Fed Funds Rate Overlaid with US CPI 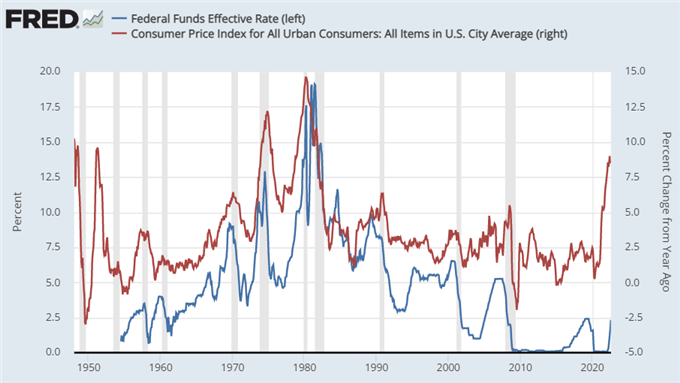 I’m on Data and Intervention Watch

While the S&P 500 struggles to gain traction with a few fundamental winds, it remains particularly exceptional that the US Dollar has held anchored to nearly twenty years high against its most liquid counterparts. There is honorable mention in EURUSD struggling around parity as it frequents 20 year lows and GBPUSD which stands on the door of 1985 lows should one of the principal themes overwhelm support, but the pressure seems generally universal in nature. The Greenback is overriding other principal players whether it be through its safe haven status, relative rate potential or more reserved recession risks.. Those views will not hold out forever, but extending the wait time can certainly fan expectations for a serious move. On that front, I am keeping a close eye on high-risk intervention threats. The top candidate among the biggest players is not the Fed, ECB or BOC but rather the Japanese Yen. With USDJPY advancing on highs not seen since 1999, there is serious potential for Japanese authorities refusing to break fast on monetary policy to instead return to a quick fix solution. This is absolutely something to monitor moving forward. 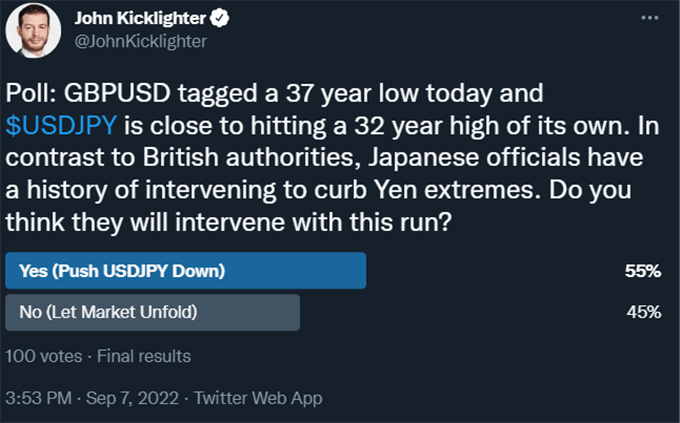 Looking at market expectations shifting from polls to positioning, it is worth noting that retail FX traders are leaning heavily against the bullish default. The IGCS shows open short positions on USDJPY is the most bearish dense I at least a year while the net figure is just as exaggerated from a pressure value perspective. I will be keeping a close eye on participation moving forward; but a carry swoon, rate forecast upheaval or collapse in risk trends in general are all factors for USDJPY and other risk-sensitive measures. 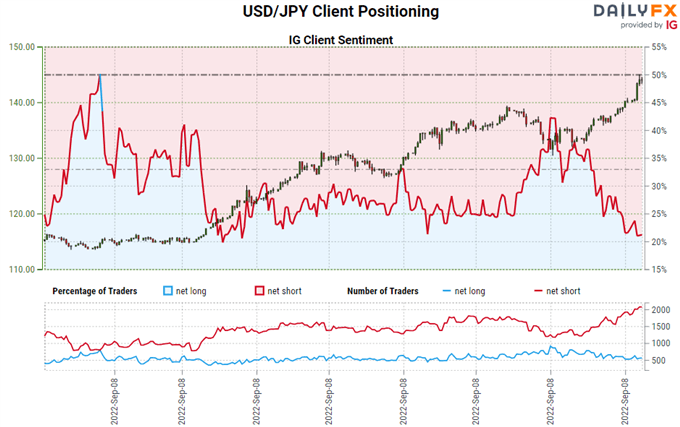 Chart Created on DailyFX.com with data from IG

Through Friday’s session, the systemic remains a top focus for me, but that does not mean that there is nothing else on the docket. One region and currency outside the spectrum of inertia is the Canadian Dollar. USDCAD could be interesting as the pair reverses from the top of a medium-scale channel resistance, but there is more to direct traffic. Top event risk on the Friday docket may very well be the Canadian employment update – though this is note going to have the same scale of reach as say the NFPs from the United States. Nonetheless, this should be a pair to watch for Friday conditions. 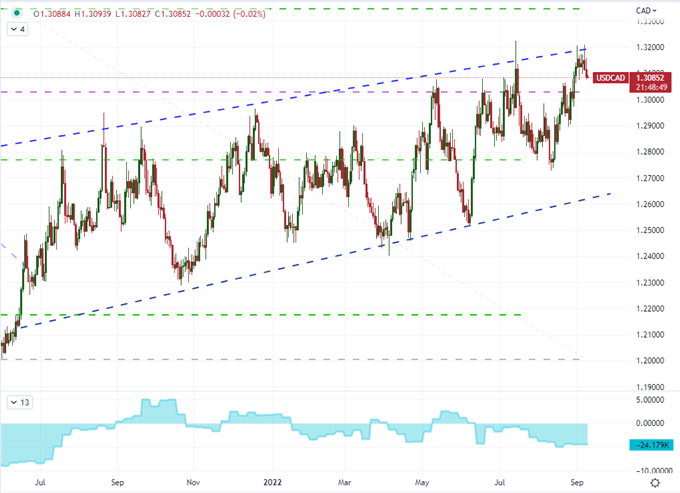