The market was on pace to mark a ‘trend’ with its response to Fed policy decisions until this week’s FOMC decision broke the cycle. After the May and June rate hikes by the US authority – with a jumped in tightening pace to 50 and then 75 basis points respectively – there was a rally ‘day of’ and a slump on the subsequent Thursday trading session. From the S&P 500, the 2.6 percent rally into controversial resistance would have set the stage for the skeptics, but the Thursday follow up registered a healthy 1.2 percent follow through. This doesn’t look like a healthy consistency in my book given the fundamental issues undermining the speculative swell. Debate over a technical recession is essentially splitting hairs on a contraction while the world’s largest central banks refuse to pullback on their inflation fight. Looking out over the week’s horizon, seasonal factors will clash with fundamental interpretation. For the S&P 500 bouncing between the 100 and 50-day moving averages, there are technical guiderails to follow. That said, it is important to distinguish short-term speculative charge from the intent to develop a new trend. Generating conviction for the latter scenario will prove difficult in such a regime. 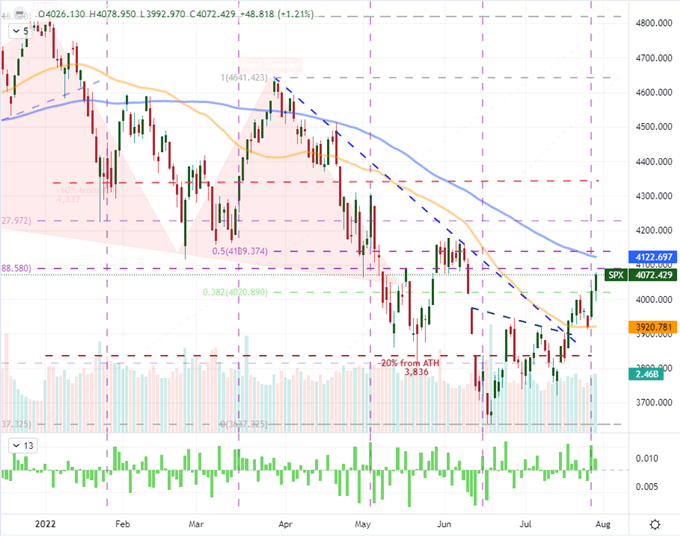 As the Seasons Change

As of the weekend, we will transition from July trade to August. That carries with it some material speculative assumptions. Historically-speaking, we are still slogging through the Summer Doldrums; but there are some averages that should be considered for context in speculation around key event risk like Friday’s NFPs. Breaking the historical context down by a calendar month-basis, the month of August historically sees a drop back in capital market performance and the lull in volume – though volatility has continued to rise despite curbs. While there is some strong ‘self fulfilment’ in the type of market conditions we have been facing, it is worth always keep an eye out for the unexpected to up-end the norms.

Table of FOMC Decision and Presser Scenarios with Outcomes Highlighted 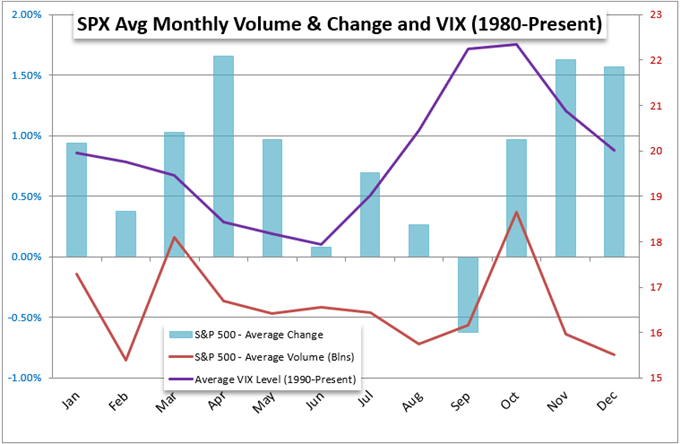 Another factor in the seasonality department moving forward is the more granular expectations on a weekly basis. This past week ultimately fell in-line with seasonal implied activity measures, but we continue to operate with an ill-establish peace. While the month of August is known for its drop in volume and a light bullish bias among retail traders these past years, I would not simply assume the averages are going to simply direct our path forward. There are systemic fundamental risks nipping at confidence as of late, but even the historical averages themselves could usher in a sense of unease. Historically, the 31st week of the year, which are heading into, presents a dramatic reversal in market tempo; but I’m not operating with the belief that ‘this haps to happen this time around’. 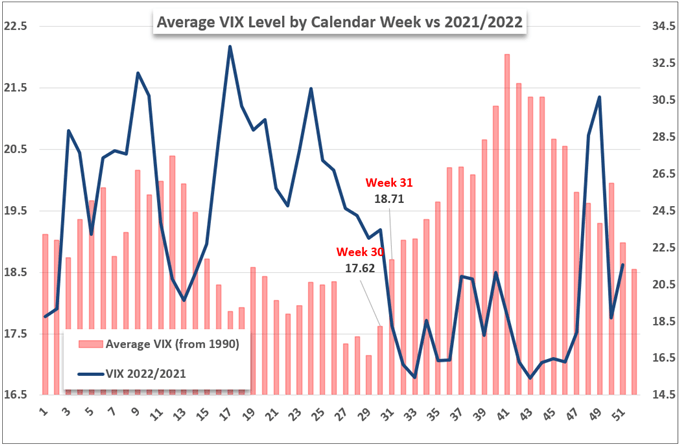 What will play the biggest role in driving the market over the coming days/weeks/months? There are many different opinions on this front, but where we find the consensus is where we are more likely to find an active market. When it comes to the FX world, there were some very unexpected moves , including the plunge in USDJPY and other yen crosses. Looking out over the economic docket, we have the PCE deflator, US earnings and NFPs to force the recession fears to lose prominence or sideline them altogether. However, The ‘safe haven’ roll of the Greenback wasn’t truly put into place this past session as the DXY dropped to a multi-week low – though extreme rate forecasts may offer up some trend clearance. The Greenback stands on the cusp of a bigger reversal against many counterparts, but the final mile is frequently fraught with questions related to sentiment. 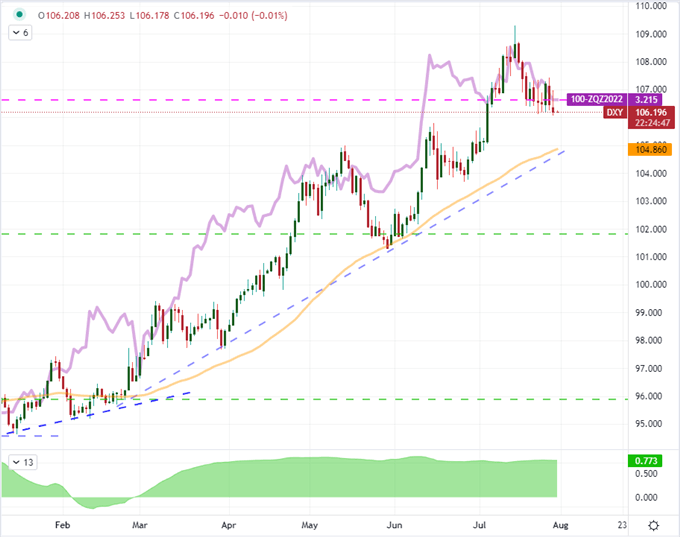 For more local considerations on fundamental sparks, the docket through the end of this trading week carries some serious weight. Setting aside Japanese consumer sentiment survey, the Euro-area GDP updates and Fed favorite inflation indicator (PCE deflator) are the top catalysts to end the week. Given the distorted reaction to the US confirmation of an ‘old world’ definition of recession without a clear upset in capital markets, the Eurozone growth path will be even more closely scrutinized. Meanwhile, the Euro may find itself dealing with further burden of locally troubles through Friday with the combination of EZ 2Q GDP and July Euro-area inflation. Other fundamentally-capable events on tap to close the week include the BoJ Summary of opinions, Eurozone GDP, earnings and more. All of these catalysts enumerated, it will likely remain difficult to generate a backdrop of progressive for the search algorithm. 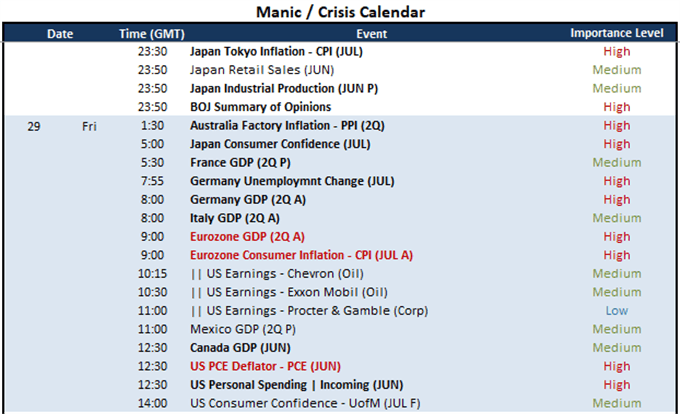 At the Highest Level

As always, the march forward brings new and previously unexpectedly fundamental innovations, but for now, the focus seems to be matters that have shaken up market participants for weeks. With bullish, bearish and neutral search interests so active in the market, it is worth remaining highly vigilant on our positions and de-risk where it seems reasonable. Looking at Google search trends over just this past week, there has been a backdrop of fundamentally ‘interesting’ circumstances from which a new person will delve into the economic tomes. So long as the focus on ‘recession’ dominates other systemic issues, I will remain on a footing that aims to exit should volatility swell and persist. 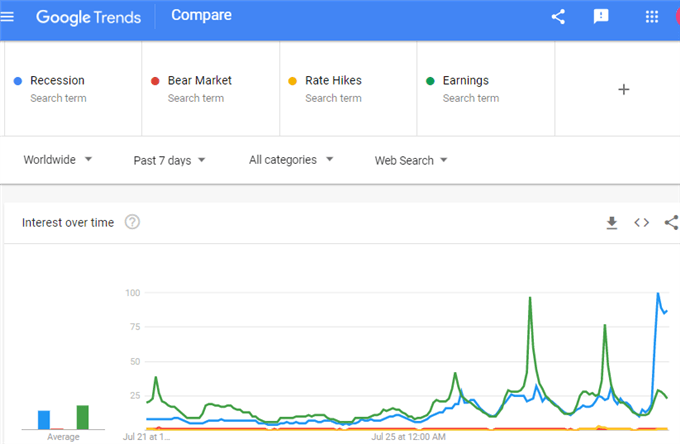 For top event risk this week, there remains a split between monetary policy and the effort to dodge an official recession. Looking out over the key measures of economic pain, the ISM service sector report will be my top interest. The largest component of consumption in the US by far is the defined by the health of consumption and labor conditions around the service sector update Wednesday. Along similar capabilities to upset speculative trends, the docket ahead hosts a number of important rate decisions: from emerging markets to the BOE and RBA anticipated 50bp hikes each. How much will that do for the likes of GBPAUD? Traders should monitor the reaction. 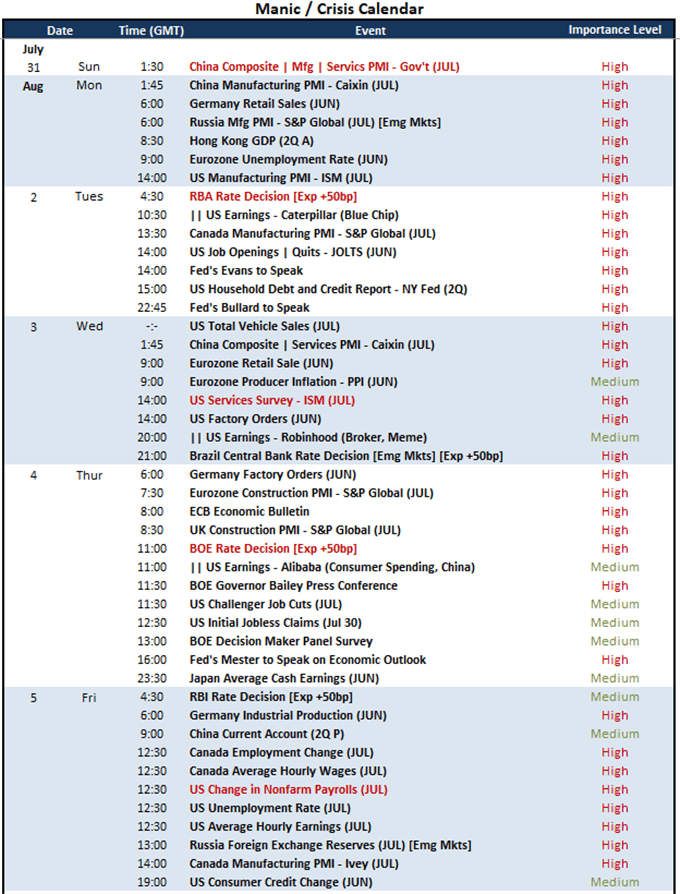