Big Fed Hike and S&P 500 Rallies, Will It Persist After Another Through GDP’s Recession Risks?

In the traditional understanding of monetary policy and capital market reaction: rate hikes and other tightening efforts are considered a curb on the economy and thereby a burden to markets like indices. While that is true generally, the influence of speculation and its projections significantly skews that relationship in practice. The Fed’s update this past session was objectively hawkish in historical terms, but ‘risk oriented’ assets like the S&P 500 ultimately rallied after the headlines were processed. The changes were not as restrictive as was perhaps feared, which seems to have produced an impressive 2.6 percent S&P 500 charge. However, whether this run is a ‘relief’ move or start of something more trend oriented remains to be seen. It is worth noting that with the last three FOMC decisions – at which the Fed hiked in increasingly larger 25 bp increments – the index was significantly higher on the day of the news. In the last two instances, that jump reversed by the following day. 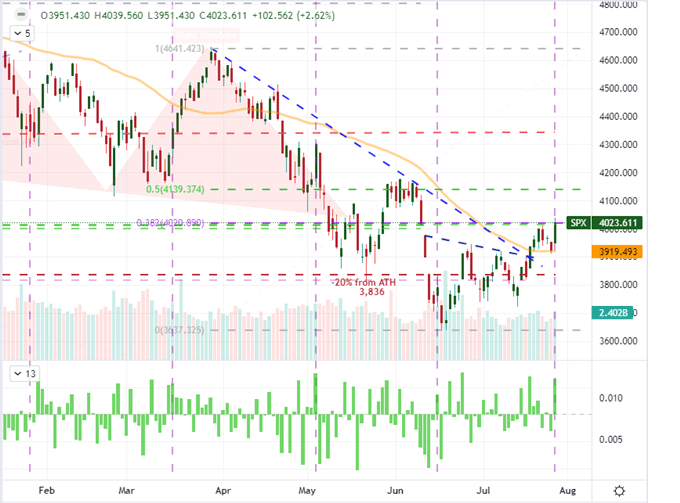 There is a material difference between a market’s immediate response to a significant fundamental development and the trend the new fundamental steer contributes to over time. Historically, the 75bp hike is a remarkably-aggressive tightening effort by the Federal Reserve. Back-to-back moves of this magnitude have not been seen since the 1980s. Yet, despite that context, the news was still ‘in-line with expectations’. The markets were pricing in a hike of this magnitude for some weeks with only a brief charge where the notion of a 100bp hike was entertained. So, the news of the large hike required further context to determine whether the news improved or diminished circumstances for the capital assets, yields and the Dollar. The monetary policy statement didn’t seem to stir much interest of its own, but Fed Chairman Powell’s remarks aligned to a strong rally for the S&P 500 and drop from the Dollar. What did he say to stir the markets? Wading through the Fedspeak, it seems the reference to meetings that were more ‘live’ than prescribed lowered the expectations of a relentless hike regime. Whether that proves to be the case or not, time will tell. However, if evidence of a recession landing grows, the appetite for an inflation fight will very likely cool.

Table of FOMC Decision and Presser Scenarios with Outcomes Highlighted 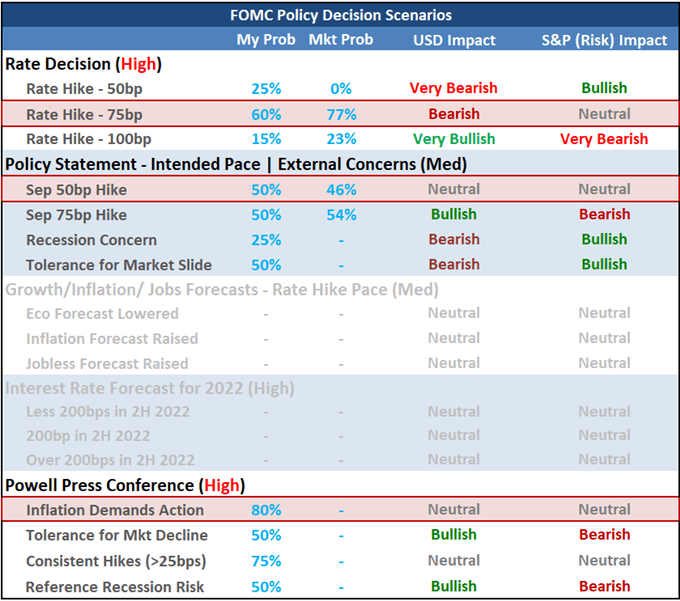 A Dollar Slip on a Big Rate Hike

When it comes to the ‘risk assets’ response to the Fed’s hearty rate hike, we can work towards the speculative take and the potentially contrasting short-term take and the underlying trend. Yet, why did the Dollar lose ground in the unambiguous upgrade in its carry advantage? The trade-weighted DXY Dollar Index posted its biggest drop (-0.7 percent) in 29 trading days. While the USD measure did drop sharply, it very notably did not clear its range from the past six trading days. Looking at Fed Fund futures, the probability around the next FOMC rate decision (September 21st) has seen a ‘mere’ 50bp hike as the next move take over as the dominant scenario with 51 percent probability priced in (with 41 percent afforded to a 75bp outcome). Ultimately, through year end, the market is placing the greatest weight towards a 3.50 percent top out (at 41 percent), which represents a pullback from a peak that was previously higher. All of that said, the Dollar’s push to two decade highs begs the question: how much is already priced in? 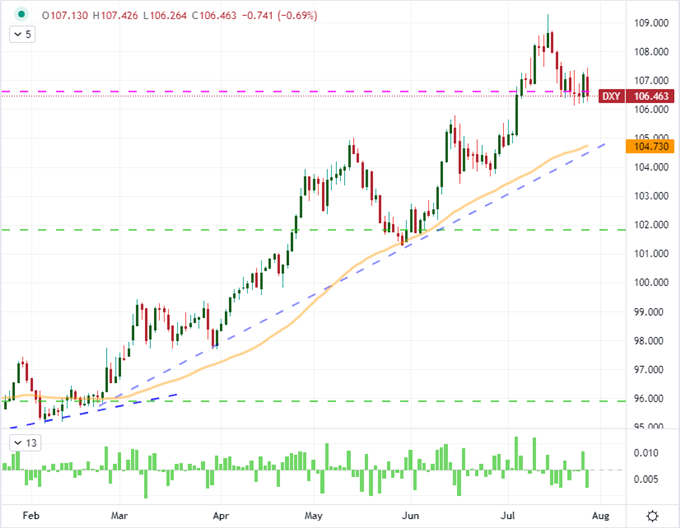 When it comes to the Fed’s policy bearings, traders would do well to remember that monetary policy in the FX markets is a relative consideration. Relatively speaking, the Fed’s moderation of tone for future policy tightening is a moderation from the unchecked forecast we were previously dealing with. That is not to say that there were expectations that the US central bank would continue to tighten with impunity, but it wasn’t clear where they would reasonably believe hikes reflect a diminishing return. In context, I would say that the Fed’s relative policy stance took a jog lower after Fed Chairman Powell’s remarks that future policy meetings were not as clearly relegated to further rate hikes. In other words, the path forward is ‘live’ with interest rates which may look less aggressive/appealing relative to groups that are more ambiguous about their path forward including the BOC (Loonie), ECB (Euro) and BOE (Pound). This may not be the genesis of a genuine Dollar bear trend, but it is something to watch. 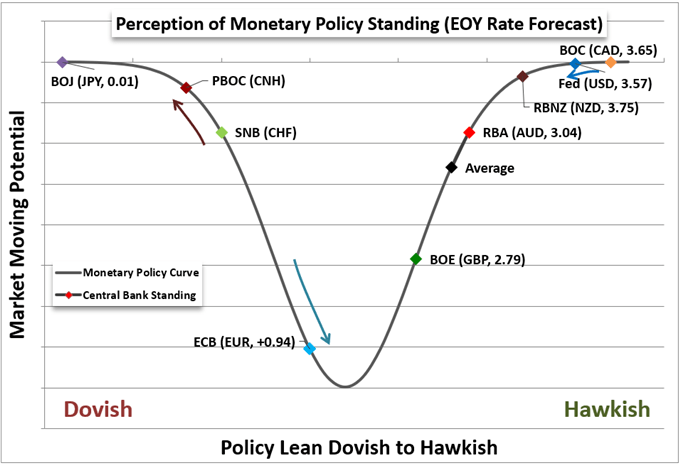 What’s Ahead for Macro Traders

If you are looking to major global event risk – whether for short-term moves or trend development – this is plenty still on the docket that needs to monitored. While I believe we are going to shift our focus back onto the general health of the broader and localized economies, there is also very clearly a spark of attention that will keep following rate expectations. While Eurozone consumer inflation, Canadian wage inflation and Australian import and factory inflation are all important to monitor; Powell’s reference to the importance to its own preferred measure of price growth (the PCE deflator) will make Friday that much more interesting. We are due an update to the PCE for June on Friday, and the US central bank’s lead inadvertently made this a must-watch release. 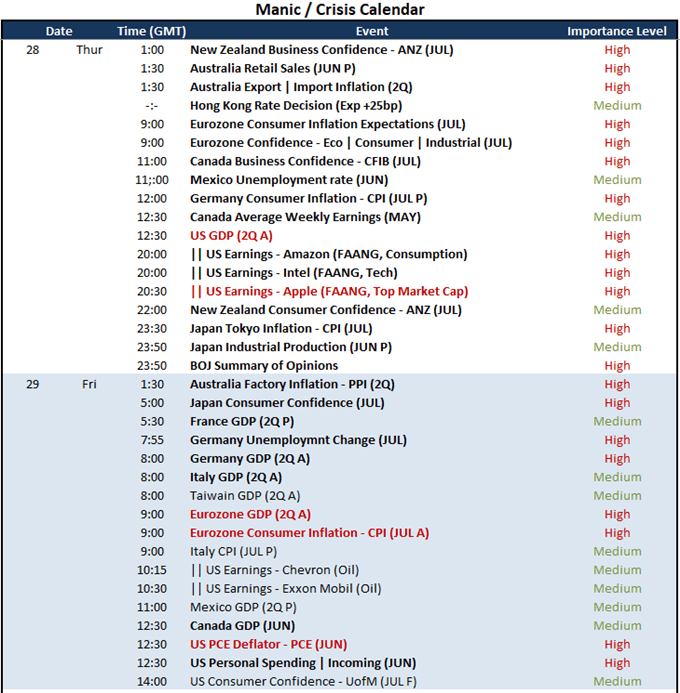 While there is certainly capacity to update on monetary policy trends moving forward, I believe the ‘end game’ of growth potential/risk remains the most important – if abstract – theme. There is no definitive definition of recession for the market, particularly after the NBER called into question its previously suggested shortcut of a two consecutive quarters of contraction. There is great debate over whether we are already in a recession, whether it is imminent or if we can avoid it all together. How this plays out will be a very important consideration to both traders and investors alike. I do think that there is a tight connection between economic health, inflation and central bank actions. That said, there may also be a skew in the impact potential of different outcomes. It would be hard to truly inspire optimism around our circumstances – a relief rally is easy to provide for – but disappointment and the crush of reality can seriously effect confidence. Watch the US 2Q advanced GDP update closely.

Chart of US GDP YoY, US CPI YoY and Fed Balance Sheet in $Billions (Monthly) 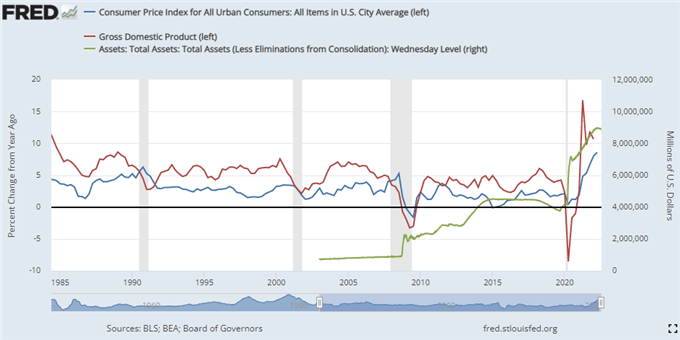