A Slip in Risk and Dollar Advance Still Struggles for Traction

There remains a general bias for the US benchmark indices and the Greenback. And yet, these trends continue to struggle for consistency and momentum. What can unless – or definitively reverse – these dominant principal market moves? Inflation and monetary policy continue to exert serious influence, but it seems that the menace of potential recession hosts the greatest capacity for trend development. If that is the case, the scheduled event risk through Friday will certainly stir concerns and test the market’s stability. In the meantime, we enter the final trading day of the week with a meaningful check to a speculative slip behind us. This ‘value-oriented’ Dow Jones Industrial Average opened Thursday’s trading session with the biggest bearish gap (-1.5 percent) since July 11, 2020. While speculation of a 100 basis point FOMC rate hike in two weeks and an inverted 2-10 Treasury yield curve were certainly party to the sentiment behind this move, this particular index’s struggle was more founded on the -3.5 percent tumble from component JPMorgan. The financial powerhouse fell short of analyst forecasts with a -28 percent drop in earnings on bad loan reserves building. That starts us off on bad footing for earnings season, but it is not alone a catalyst for a catastrophic break lower. 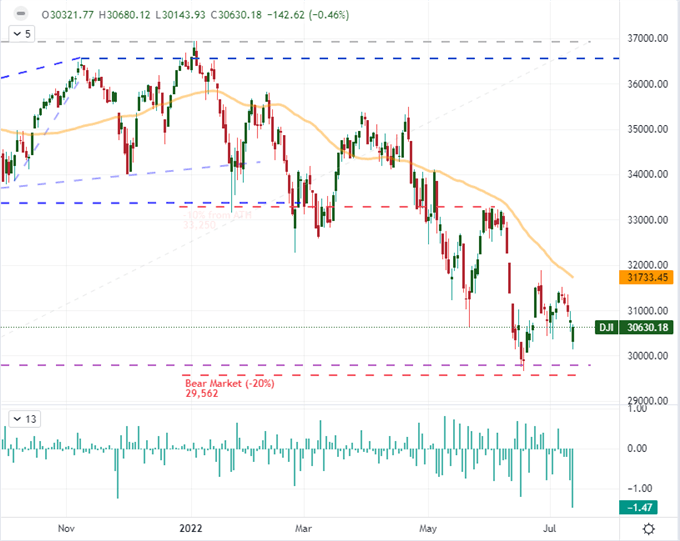 Another ongoing, systemic fundamental theme that the broader market seems to be tracking may have offered some ballast before a full ‘risk’ breakdown could overwhelm seasonal quiet. The aggressive Fed rate forecast that followed Wednesday’s heavy CPI update seems to have been deflated by key remarks from a couple of FOMC members. Instead of focusing on the troubling acceleration of the June factory inflation (PPI) – from 10.9 to 11.3 percent year-over-year growth – St Louis Fed President James Bullard said he did not support a 100 bp rate hike while Fed Governor Christopher Waller said the markets were getting ahead of themselves pricing a full percentage point increase at the next meeting. The markets seemed to pick up on that forward guidance effort with the Fed Fund futures lowering the probability of that extreme hike dropping back to 43 percent from an 80 percent assumption just the day before. This may sooth concerns of a central bank policy blowback, but it does little to alleviate the risk of an economic contraction born of other causes. As such, this still looks like a bigger weight to the Dollar’s climb than it does a charge for risk trends. 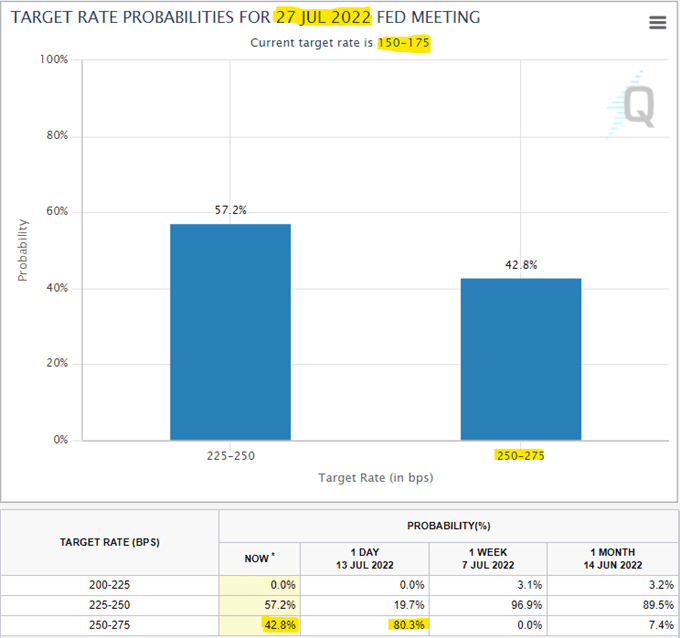 The Dollar is Increasingly Becoming a Principal Global Problem

While there are few things more influential on a macro basis than the threat of a recession that infects significant portions of (if not the entire) the global economy, there are other systemic complications that can accelerate or escalate that worst case scenario. While we have been discussing the impact that inflation and the monetary policy aimed at combating the problem can exact on the market, it seems that awareness is building around the serious effects a US Dollar at multi-decade highs can have on the financial system. The implication of export inflation out of the US, distorting corporate revenues and generally altering the course of capital flows is reinforcing the unhealthy trends. Notably, the world’s most liquid exchange rate, EURUSD, briefly dipped below parity this past session; but the market made sure to end the day back above 1.0000. There is no reassurance in the bounce as is evident in the CBOE’s Euro volatility index pushing to levels soon to compare to the pandemic period of panic. 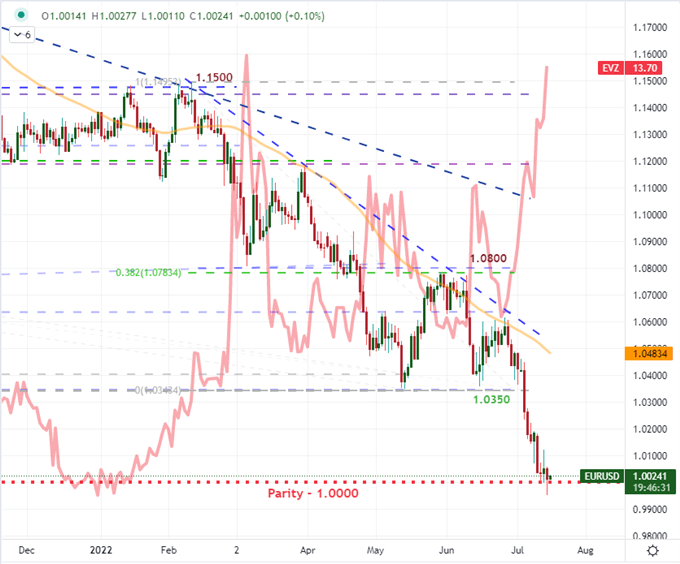 The problem that we are seeing in exchange rate distortions is not just a result of the Dollar’s issues. As is always the case in relative pricing instruments, the currency’s counterparts are contributing to the imbalance equally. While there are some other major central bank names that have upped the tempo of their own policy to keep stride with the Fed (such as the RBA and RBNZ that hiked 50bp this month and BOC with a 100bp increase), its largest peers have noticeably fallen behind. The European Central Bank (ECB) has yet to pull its benchmark out of negative territory and the Bank of Japan (BOJ) seems to have no intention of moving from extreme accommodation executed through yield curve control. If these far larger financial centers and currencies cannot provide more balance, it is likely that financial imbalances continue to fester. Take note, both the ECB and BOJ are due to update on policy Thursday next week. 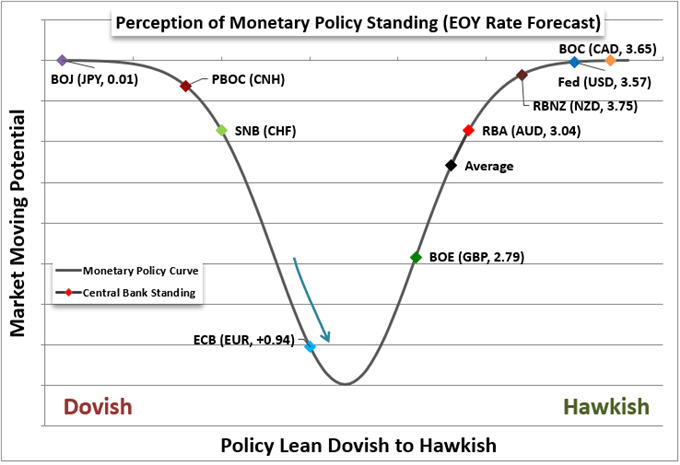 Following the economic fear that followed the US inflation report earlier this week, I ran another poll asking traders (in Twitter) whether they believe the world’s largest economy would find itself in an official recession in 2022. Of the 154 votes cast, 82 percent said they believe that the leader of the developed world would indeed qualify a destructive contraction. There has been some meaningful debate among economists, analysts and market participants that the US and others may have already crossed the threshold. Next week’s July PMIs and the subsequent week’s advanced US 2Q GDP release will go a long way to offering tangible evidence that confirms or refutes. In the meantime, speculation is still unmoored. Since the US 2-10 spread (difference of the US 10-year and 2-year Treasury yields) has inverted, my attention has shifted to the 10-year yield specifically as it tends to offer a closer tracking of growth expectations versus the monetary policy oriented 2-year. Meanwhile the world’s second largest economy, China, reported its own economy contracted at a faster-than-expected -2.6 percent this past quarter.

Chart of the USDCNH with 200-Day SMA (Daily) 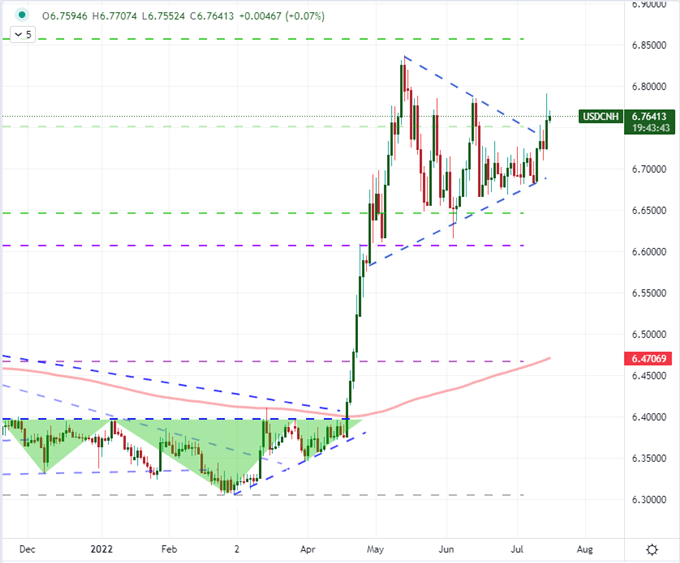 Looking over the list of top fundamental events through the final trading session of the week, there are plenty of indicators which provide an economic picture. Earnings reports from consumer bank giant Citigroup and top asset manager BlackRock will offer a financial angle to our economic health. Meanwhile, retail sales and industrial production will reflect a real economy data report on key aspects of output. However, it is the July update of the University of Michigan’s consumer sentiment survey that sits at the top of my list of market movers. If you recall, last month’s update signaled the worst reading from this indicator in its series going back to the 1970s. I further slide into the abyss will not go overlooked by those that have been further spooked by unrelenting inflation and the talk of another 100bp hike in lending rates. 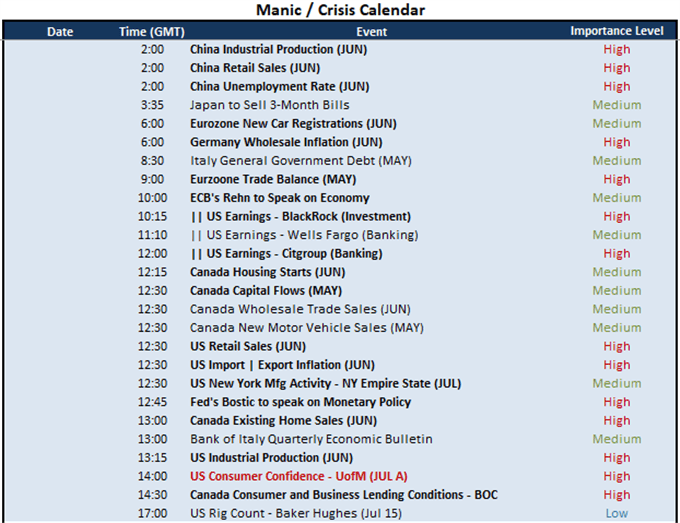