There is No Mistaking the ‘Bear Market’

Any hope that the weekend would provide a respite from the sudden volatility and the burden of a high-level fundamental struggle last week was thoroughly thrashed Monday. The benchmark S&P 500 extended its tumble through the open of the new trading week with a -3.9 percent dive that accelerated the previous three-day slide and notched a three-session decline that accounts for a staggering -8.9 percent drop. That is the worst tumble over that period since the height of the pandemic-led financial crisis. Furthermore, it has pushed this benchmark of ‘sentiment’ into an official ‘bear market’. That designation is determined by a 20 percent correction from all-time or cyclical highs. Below 3,836, the US index is trading at a 20 percent discount to its record close set on January 3rd. If it were just the SPX that were tumbling while the rest of the financial system were steady, I would consider it an outlier that was due a rebound to stabilize before the FOMC rate decision on Wednesday. However, the pain is proving uniform and remarkably intense across various regions and asset classes. This is not an environment in which I would cavalierly call a ‘bottom’. 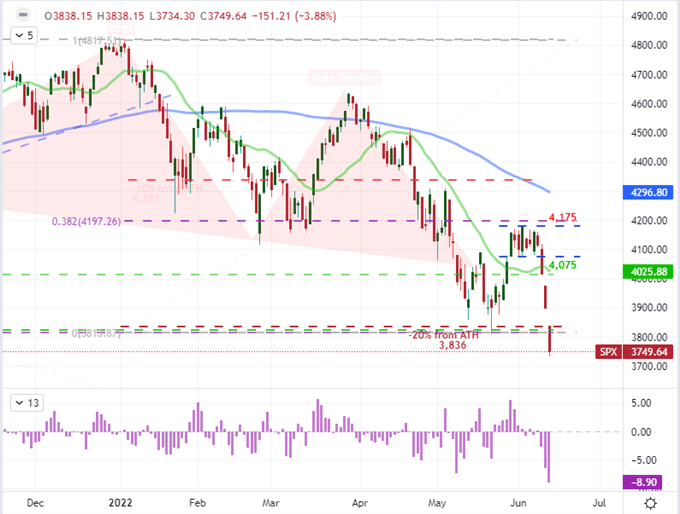 Let me reiterate: I think that picking (meaningful) tops and bottoms is a very improbable scenario not befit a trader that appreciates probabilities. That said, I know that many – if not most – will still consider the conditions that would market the systemic turn in the broader markets. So, what am I looking for to determine whether the prevailing bear trend is in full control of our destiny or whether evidence is starting to build the case for a bottom in the severe bearish pressure? Overall, a fundamental foothold to argue that there is a meaningful value in to be exploited in the market is principal to my interests. Either the capital markets need to overshoot a discount or the outlook has to start to show the traces of a recovery to really draw the long-term, buy-and-hold crowds back into the market despite the official ‘bear market’ pressure heaped on by the headlines. Adding to that, an acute surge in the VIX fear index can help push the market from a steady deterioration into a ‘flash’ bottom. A surge above 50 historically aligns to sentiment pushing an extreme, but that doesn’t have to be an absolute high, so do a deeper analytical dive should it occur. 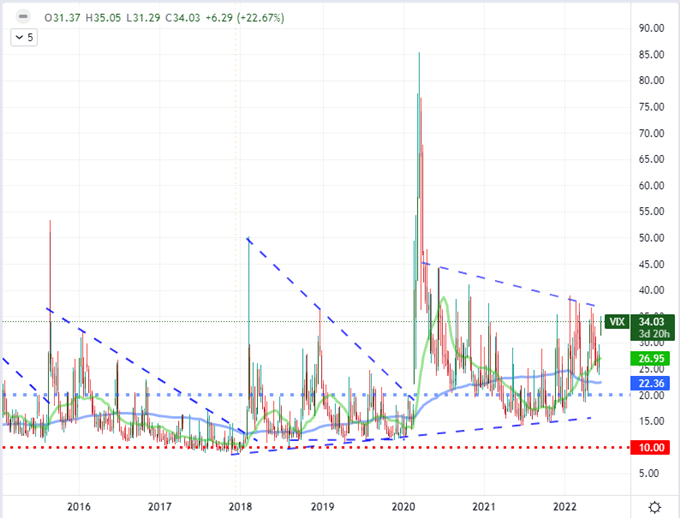 ‘Risk trends’ is a fairly abstract concept, but most traders can recognize ‘risk aversion’ when they see it. And, it was a pretty strong indication through the opening session this week, that risk aversion was on full display. It wasn’t just the SPX that suffered a sharp decline this past session. The tech-heavy Nasdaq 100 index dropped a painful -4.6 percent Monday which would drive the NDX-Dow (Growth-Value) ratio its lowest point in two years. We’ve been tracking this leading speculative measure for since it topped back in early December 2021. In general, the quality of risk aversion is proving broad and server. On one end of the spectrum, junk bonds are showing far more intense pressure while the carry trade is still early in its own retreat. That said, the signal is resonating across the financial system and that makes it a far greater risk of entering a self-sustaining cycle. 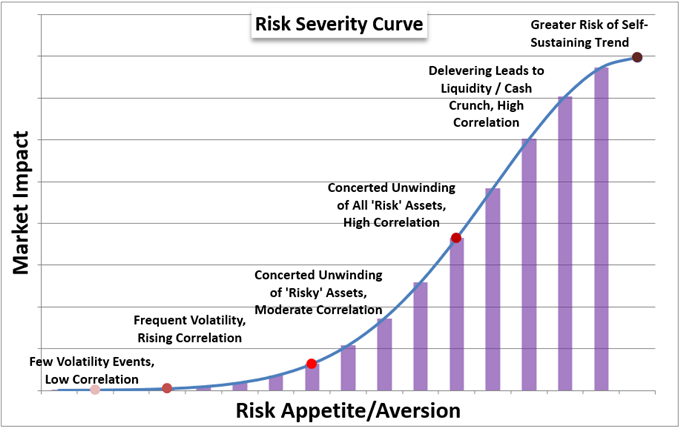 Speaking of eroding confidence, there is a very important and tangible connection between market performance and actual economic performance. As the world leans into the possibility of an economic recession moving forward, the hold out quality of the capital markets will wear very thing. Leading indicators for economic trouble have been throwing out warning signals fairly regularly over the past few months with projections from the IMF, World Bank, OECD, White House and central banks just a few institutions that have warned us to be on guard. Despite that heads up, the speculative regime held strong. That clearly changed through the end of this past week into Monday’s trade. A market-based measure, the US 10-year to 2-year Treasury yield spread (often called the ‘2-10 spread’) inverted through Monday’s close / Tuesday’s open. That is historically considered a recession signal amongst investors. Should we be worried? At the very least, we should be cautious. 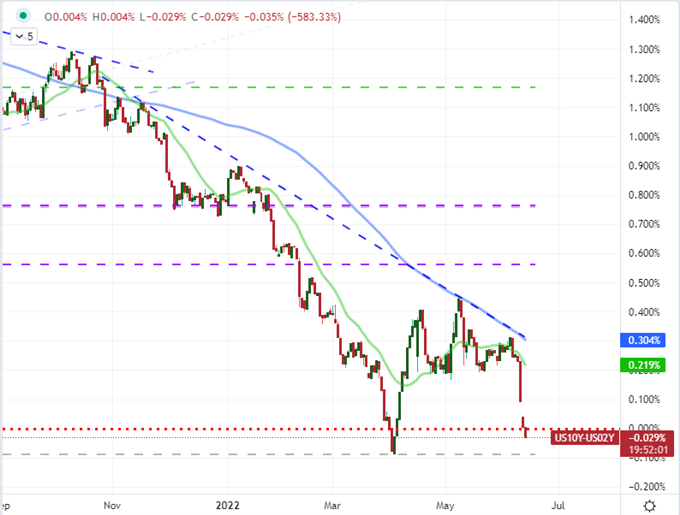 Though Monday’s session was reasonably focused on the tumble in risk assets, it is important to also direct the focus onto the performance of the US Dollar. There is a safe haven element behind the Greenback that I do believe has significantly kicked in to start the week. With the magnitude of risk aversion registered in traditional risk assets, expecting a systemic shift towards the ‘haven of last resort’ doesn’t exactly surprise. That said, if we needed a fundamental cue to bolster the logic of the Greenback’s charge, we need to look no further than the rate forecasts that have build up behind the Fed Fund futures. Last week, the expectation of a still-robust 50 bp hike on Wednesday swelled to a 97 percent probability. As of Monday’s close, that confidence slipped to a 7 percent chance as the forecast shifted to a 75 bp hike later this week. That is a very high water mark…. 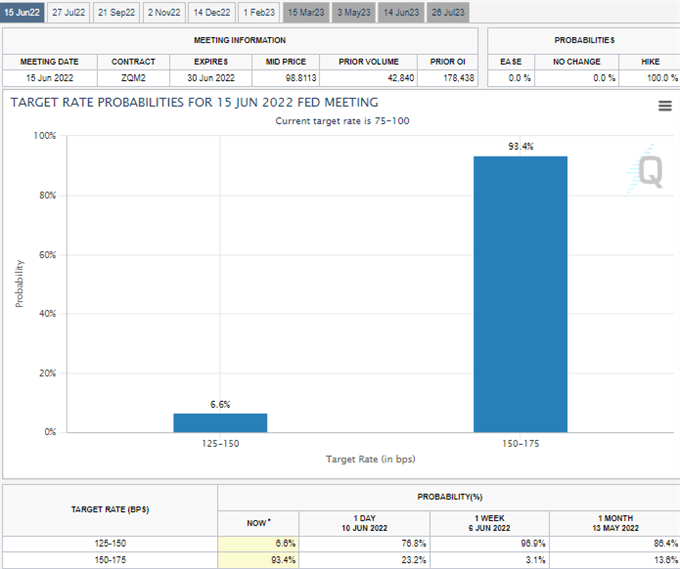 When it comes to rate speculation, USDJPY remains my go-to cross. It is often overlooked that this particular pair is vies for the second most liquidity pairing of the entire FX market while there is also a very distinctive risk perspective the cross fulfills. Remarkably, this cross rose a 7th consecutive trading session after avoiding an overdue correction through Monday’ session. Statistically, technically and even fundamentally; the pressure for a turn is building to a serious scale. I will be watching this currency cross closely for its fundamental and speculative implications going forward. 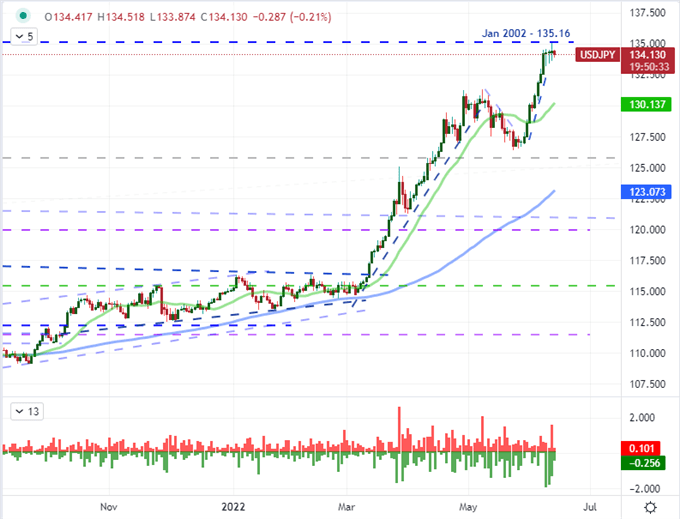