‘The markets can remain irrational longer than you can remain solvent’. That adaption of the John Maynard Keynes’ saying seems to me perfectly applicable to the conditions we are facing with the S&P 500 – and by large ‘risk’ assets overall. I have been tracking the remarkable constraints for the US equity benchmark each day; and with Wednesday’s close, the tally has notched up to eight straight trading sessions whereby the world’s most liquid currency pair has held to an exceptionally tight, 100-point range. The last time we have seen the market so quiet was the stretch through January 4th which was holiday trading conditions. Our circumstances are very different now than they were then. Before that reference point, we had experienced various stretches of market fatigue throughout 2021, but conditions now are vastly different than they were in that complacent-driven bid for risk exposure. Between extreme inflation, aggressive rate forecasts and a progressive slide in rate forecasts; steadfastness in the most speculatively-focused risk measures seems more than suspect. 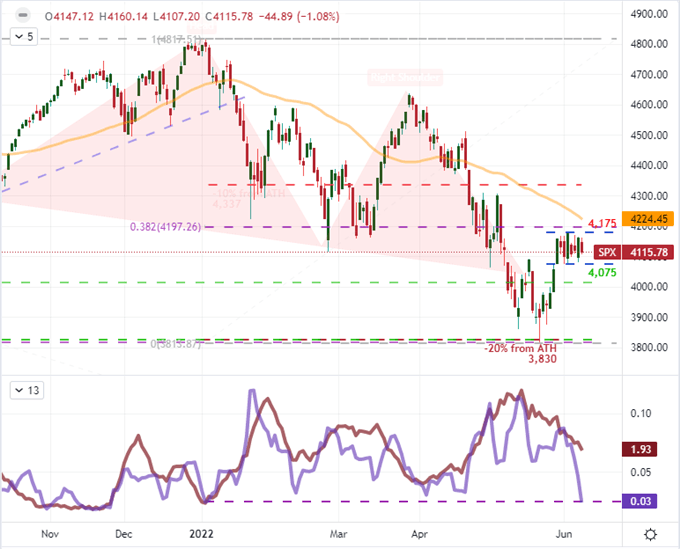 When it comes to ‘risk assets’, the S&P 500 – and more broadly the US indices – are what I consider to be the most resilient speculative group in general. Over the long term (ie the past 10 years), US equities have meaningfully outperformed in the post-Great Financial Crisis era. However, if we shorten that timeline significantly, it would not be a stretch to say that the Yen crosses are outpacing all of the major categories of ‘risk’. All of the major Yen crosses have surged over the past month – even CHFJPY – but the yield-heavy pairs have leveraged some of the biggest moves. While GBPJPY and NZDJPY are worthy of evaluation, USDJPY is in a league of its own. The 1.2 percent rally from this second most liquid pair is the biggest single-day rally in six weeks. More than that, the charge extends an 8-day rally that is only comparable to the post-pandemic or US election period. In other words, it is extreme. Speaking of extreme, we are less than 100 pips away from the swing high established back in January 2002, which will register even on the radars of the technically-agnostic. This is a pair to watch around its highs, but its real capacity for movement comes should risk appetite once again collapse. 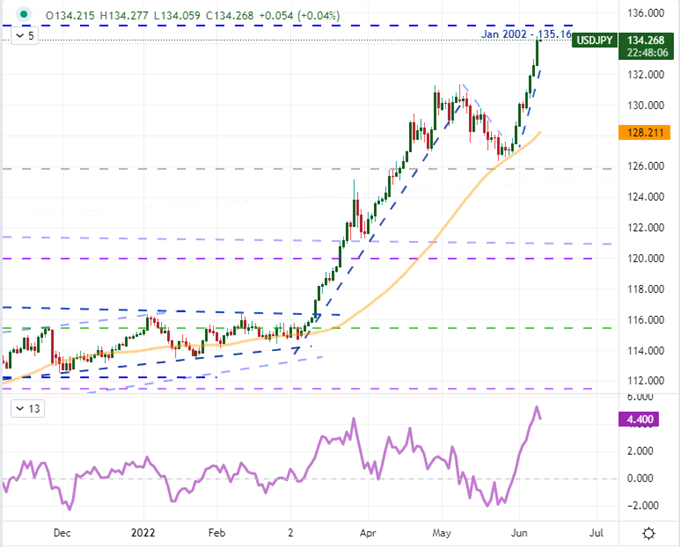 While the S&P 500 is unique in its reflection of market restraint for a host of reasons, it is not at all alone when it comes to the potential for a meaningful breakout. Another financial system benchmark, EURUSD is pushing statistical extremes and has a more discreet fundamental spark that carries the capacity for driving the market from its oppressive range. Looking at the chart, the benchmark Forex cross has ping-ponged back and forth between 1.0800 and 1.0635 for the past 11 trading days. That is as narrow a corridor as we’ve seen from this benchmark as we have seen since the very beginning of the year. Unlike the US index, there is a very specific event risk that we can point to that is capable of generating volatility for the Euro; the ECB rate decision. While no change is expected at this particular meeting, speculation of a July and September hike are all but baked in. Should this resilient dove relent to inflation pressures, it could upend the monetary policy drive of complacency-driven risk appetite. If they hold out, it could quickly undermine the recovery rally for the Euro this past month. 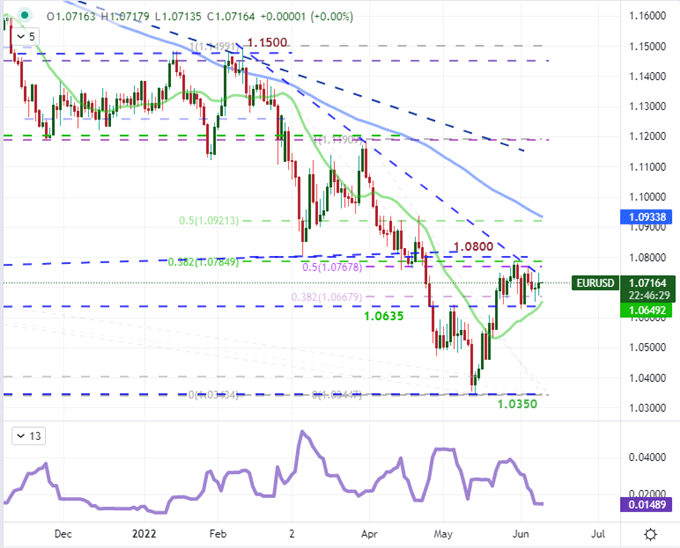 Speaking of monetary policy in a more general perspective, it is important to put the ECB into context. There are really only three major central banks that are holding back on their inflation fight to ‘officially’ support growth, though there is good reason to suspect some currency manipulation is under consideration. Pushing aside the SNB which has maintained a negative rate simply to do ‘just a little more than the ECB’, the Bank of Japan (BOJ) seems committed to anchor its 10-year JGB yield in an effort to spur growth – despite inflation pressures. That has truly driven the Yen crosses to the heights we are currently testing. That said, the ECB has seen assumptions settle in for the Euro and regional benchmarks. Through year’s-end swaps are pricing in a benchmark rate of 0.68 which is an aggressive reversal from the -0.50 percent principal rate currently supported. If this group decides to pull out of its relentless accommodation, it carries significant implications for euro value; but beware its influence is larger global ‘risk trends’. 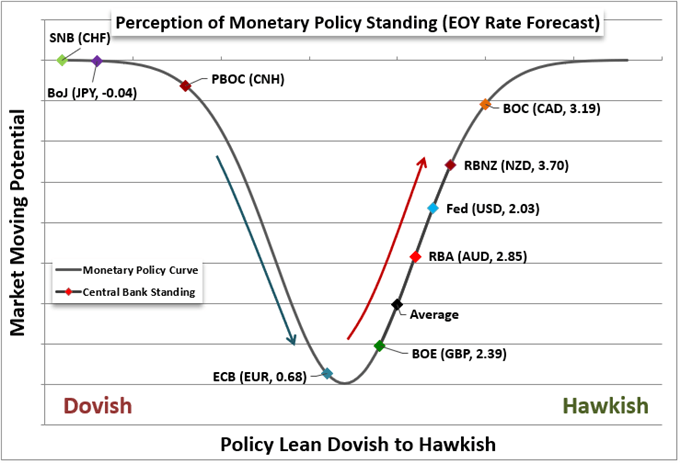 When Will We Acknowledge the Recession in the Room?

I had read the calendar wrong this week. I had mixed the releases of the World Bank and OECD growth forecasts and subsequently was unprepared for the latter’s update this past session. Ultimately, the data fell in line with the problems that we have seen in other statistical venues. For world growth, the OECD lowered its ‘world’ forecast from 4.5 percent in 2022 to 3.0 percent. That is a sharp downgrade, but not particularly surprising. We have seen the potential for economic expansion slide progressively from the IMF’s spring forecasts to the Markit PMIs to the data we have seen this week. Nonetheless, the pressure remains…and the discrepancy to where top risk benchmarks hover is worthy of observation. The next high-level US economic forecast comes next week with the FOMC’s updated Summary of Economic Projections (SEP) accompanying its rate decision.

Table of Economic Forecasts from the OECD 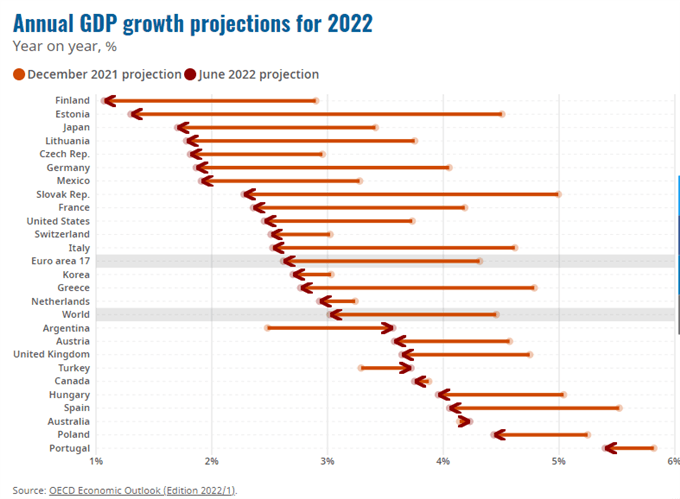 Forecasts and Table from the OECD

The threat of an economic recession is a serious one…but the market has a way of downplaying the threat until it is undeniable. When it comes to a reversal in growth, this is a fundamental ‘ends’ to so many ‘means’ that we debate on a week-to-week basis. I ran a poll to see what the average trader (in Twitter) believed the probability of a recession was for a ‘major’ economy over the coming year. The 50 to 75 and 75 to 100 percent probability categories were evenly split. Ultimately, risk trends is the end game when it comes to global markets and trend development, but economic activity and potential is what I consider to the a dominant driver. We would do well to monitor important data and critical forecasts like the FOMC SEP going forward.

Poll Asking the Probability of Recession for a ‘Major’ Economy 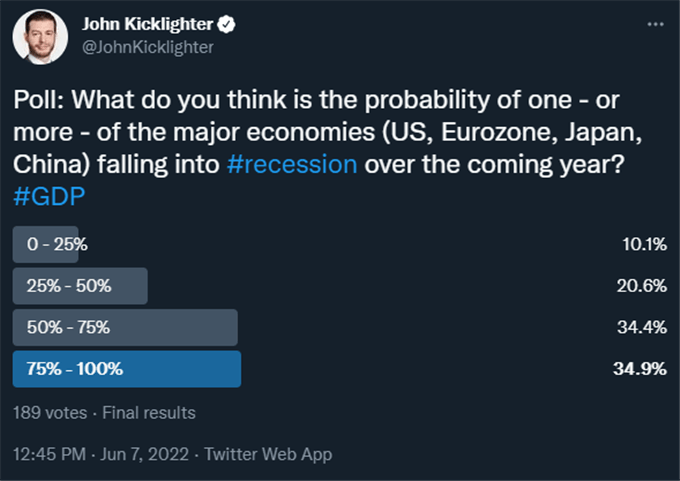