Risk Trends Into a New Month and Summer Trading Conditions

Markets continued to fill out following an extended holiday trading weekend in the US, which materially curbed speculative appetite through benchmarks on the verge of catastrophic trend determination. Liquidity can act to stabilize uneven markets, but it seems the rush of market depth we’ve seen lately represents more of destabilizing influence moving forward. The problem exists whereby the relentless drive founded on speculative certainty fueled by artificial means like central bank stimulus is being actively reversed. While the risk is prevalent, the sense of hope remains for many benchmarks. For the S&P 500, we have closed out a month that was highly suspicious. On the one hand, the ‘doji’ registered helped wared off an official dip into ‘bear market’ territory and typically fits a reversal pattern in tech textbooks. On the other, there isn’t a stretched technical trend to reverse with such urgency and the fundamental pressure is unrelenting on the bearish side between inflation, monetary policy tightening and fading growth forecasts. How would you describe these markets on the medium-term time frame? 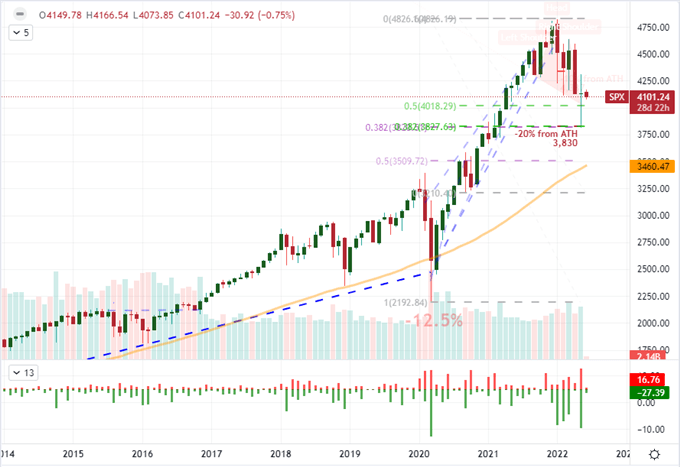 Boosting the time sensitivity scale, the same S&P 500 (as a benchmark for sentiment) has seen its inspiring charge through the end of this past week stall out. The three-day rally through Friday was an enormous, nearly 6 percent rally. Such a move can readily fuel anticipation that legitimate fundamental issues have been overridden, allowing speculative appetite to once again retake country. However, I believe that the rally was principally the result of a temporary liquidity swoon rather than any genuine shift in conviction. The difference is that the rally would more likely loose traction and retrace most – if not all – of its rebound. Volatility levels are still inordinately high and a deeper market backdrop only acts to remind us of the financial troubles that continue to build moving forward. 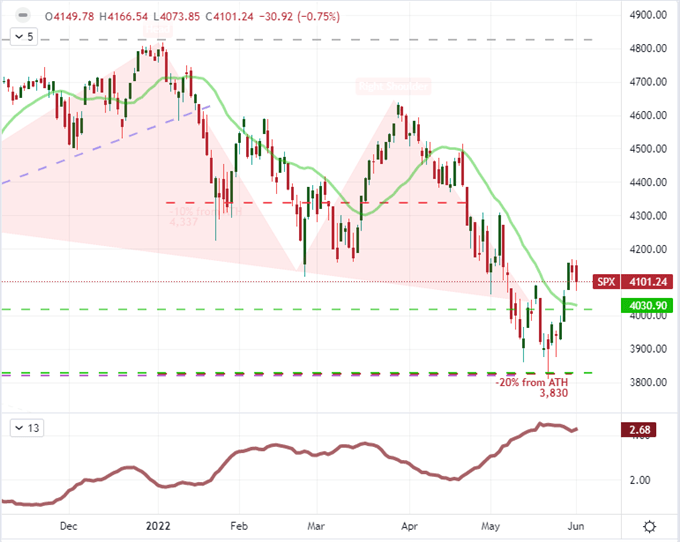 If you operate only on a technical basis, I can understand where a sense of committed reversal is emerging. The chart for the S&P 500 looks like a remarkable turn before the benchmark would tag an official ‘bear market’ designation. Furthermore, there were other risk-sensitive measures which were willing to confirm the swing in conviction. Global indices have been on the rise along with emerging markets, junk bonds and carry trade has truly committed to the drive. Yet, there is good reason for suspicion around a ‘bear market bounce’ versus full blown bullish turn for all of these. Ultimately, the greater disruptor for me is the state of the expected disruption in volatility measures. The VIX volatility index has drifted lower, but the VVIX ‘volatility of volatility’ measure has suppressed its warning signal to levels not seen since January of 2020 – before pandemic. Risk may have softened from previous month flare ups, but we are hardly in a position where markets should see little-to-no risk of shift in direction and tempo in the near future. In fact, the situation is quite the opposite of these perspective, which represents a market ill-prepared for shake up. 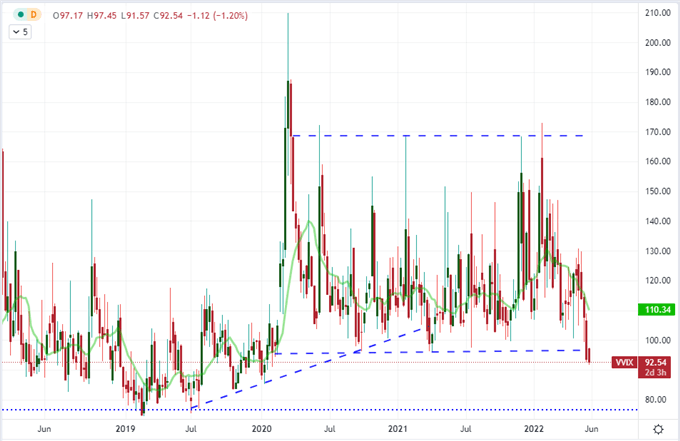 What would cause these markets to shed their artificial sense of stability? The top fundamental sparks remain the same going forward as what has unnerved traders over the past weeks and months. Inflation is a constant pressure which has only signaled its ongoing troubles recently. This past session’s ISM manufacturing survey showed continued pressure through its pricing component while home prices the day before soared. I am partial to tracking commodity prices in the open market via energy markets. Inflation is more of a risk through its pressure on monetary policy trends which are pushing most major banks to take the slack out of the system – in some cases very quickly. That is in turn undermining a complacent bid that tends to act against the fundamental backdrop, but the outright downgrade in growth forecasts truly brings the contrast to light. 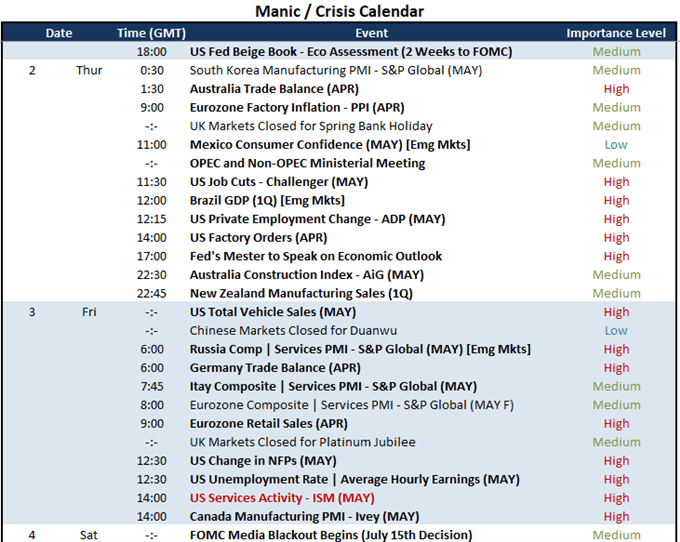 The Top Themes Are Back in Play

What is worst for speculative appetite moving forward: the removal of speculative support by major monetary policy groups or the slowing or the burden of rapidly rising inflation pressures? That is the source of a good debate, but ultimately, we are facing a backdrop that is seeing the convergence of both pressures. I see the growth front as the least transparent theme at present and thereby the greater unpriced risk. This past session, the ISM manufacturing survey offered an uptick with questionable conviction, China’s factory activity remained in contraction through May and Australia’s better than expected 1Q GDP reading was still a shadow of its previous quarter’s reading. Ahead, I will be marking figures like the Brazil GDP release; but I am far more mindful of the momentum that can build in a critical serious for a developed leader like US factory orders, NFPs and ISM service activity. 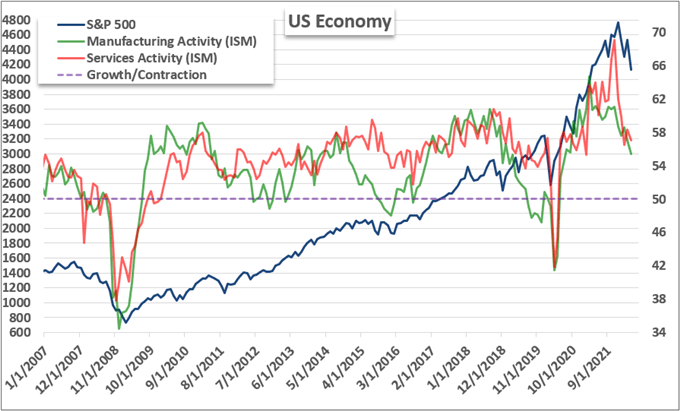 While growth forecasts are the more poorly priced aspect of the fundamental backdrop, there is no mistaking the constant pressure represented by monetary policy’s slow withdrawal of support. This past session, we had the Bank of Canada announcing its 50bp rate hike to 1.50 percent. This was in-line with expectations, but the tone still managed to keep the hawkish perspective intact. Moving forward, I am transfixed on the interpretation of Fed policy anticipation as we pass the official two-week-until-the-next-FOMC timeline and ahead of the official media blackout come Saturday, June 4th. Expect Fed officials to do some last ditch steering of expectations moving forward, and there are some serious hawks on tap. 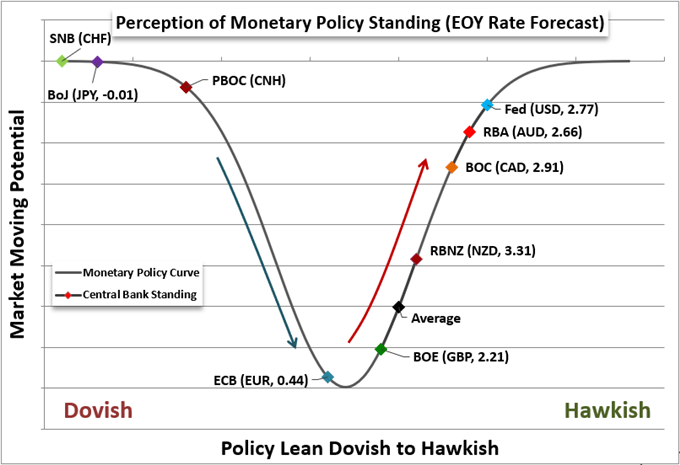 As we traverse sentiment and event risk, there are many places to look for progress, by my particular interest in USDJPY is unwavering. This pair is a great litmus test for what is more important: risk appetite; carry interest or relative growth potential. Thus far, we still see a strong upswing in performance; but I believe that risk aversion could readily swamp the well-priced picture of carry differentials in these market. That said, keep an eye on this bellwether to offer some perspective. 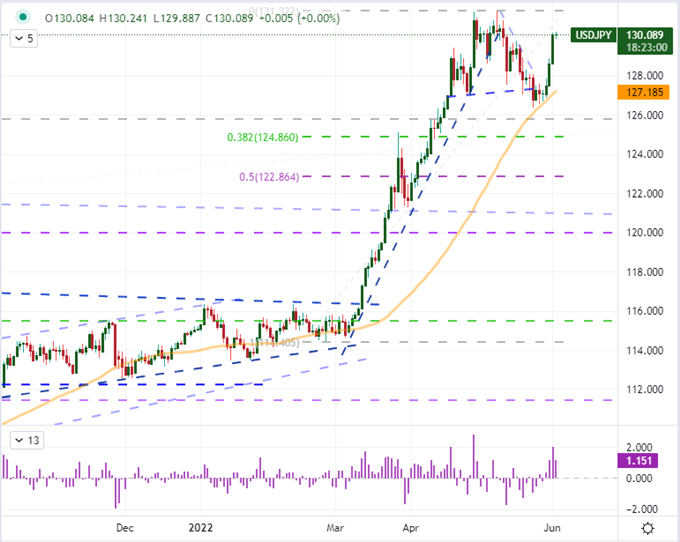