A True Recovery for the S&P 500 or Temporary By-Product of Holiday Trade?

The S&P 500 – my preferred measure of imperfect, one-look ‘risk’ measures – is looking to draw to an end a painful slide. A positive close on the week brings to an end a 7-week tumble for the US index, the worst consecutive slide for the benchmark since an 8-week stretch through March 2001. While this is statistically meaningful, simply calling an end to a significant one-direction series does not indicate that a full-blown reversal is underway. In fact, considering the fundamental backdrop to the economic and financial system moving forward, reviving a bull market looks to be an improbable course. Looking more broadly at the financial system, a recent rebound is visible across regions and asset types. This is just as likely a relief move in a larger bear trend as it is for the top US equity index. The question is: how long will the corrective phase last? 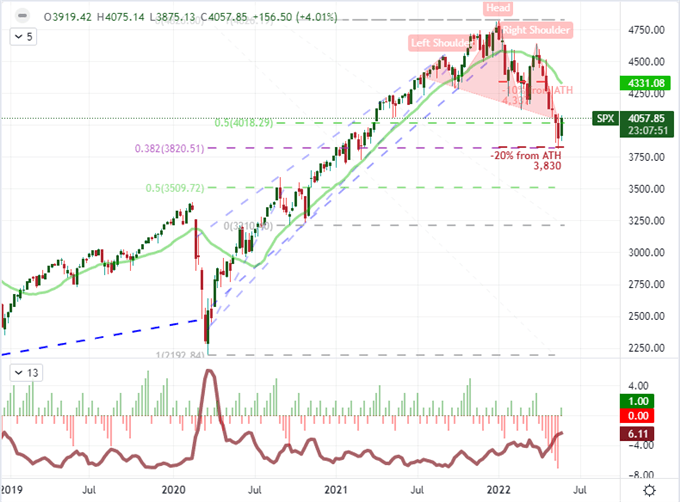 Timing out the market’s recovery, it makes sense that we are seeing a corrective drift with a known backdrop of thinned liquidity. We are heading into an extended holiday weekend anchored by Monday’s US closure for Memorial Day. Though there were updates around the top two systemic fundamental themes this past week, it wasn’t intense enough to keep up the momentum against market participants’ withdrawal. On a higher time frame, we have seen a drain of open interest from professional and retail traders. The latter is more flippant in nature and has the credo of ‘buy the dip’ and ‘diamond hands’, but they don’t carry the depth and thereby influence of the former. For professional interests, we have seen open interest in emini S&P 500 futures drop to the lowest levels since 2008. Sticking to historical expectations, the month of June which we will enter Wednesday has averaged the second worst performance of the calendar year for the same index consulting historical trends. 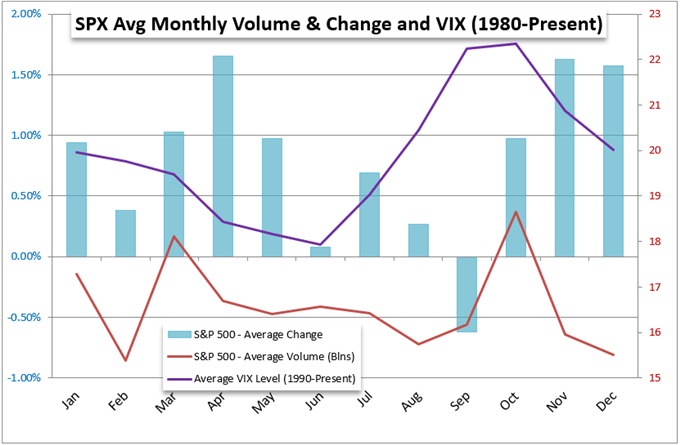 A Return of Liquidity and a Return of Heavy Event Risk

With the return of market depth over the coming week, we will also confront a significant pick up in meaning scheduled event risk. The list of ‘high’ importance data and events ahead is a multiple of what we had to work with this past week. More catalysts doesn’t necessarily mean that it will feed a bearish view, but the underlying trend has fed a view of deteriorating conditions for some weeks. It is likely that the most recent updates amplify the trouble. Overall, the events with the greatest global reach represent the most market impact potential. In particularly, the status of the United States, China and Eurozone are my top priority. 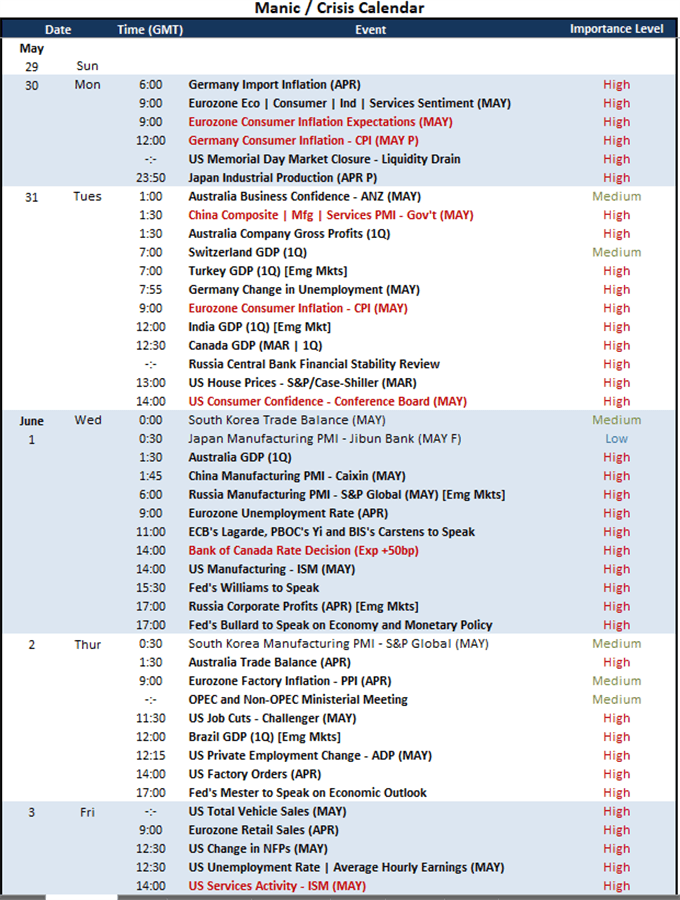 At the convergence of most major fundamental themes lies the US Dollar. The world’s most liquid currency reflects the economic health of the largest economy, registers the Fed’s monetary policy course relative to its largest global counterparts, reflects the bearing of key commodity prices amid four-decade high inflation pressures and it can also play the role of a principal safe haven when the speculative winds are particularly strong. Having this kind of fundamental clout, however, can also make it difficult to discern what is driving the market. The DXY Dollar Index registered a second week’s slide following a leg of six consecutive weeks’ gain through the May 13th peak. Taking score: the White House has warned about the economy moving forward, commodity prices have moderated, risk assets have bounced as discussed previously and the Fed’s rate forecasts has eased. These themes tend to overlap, but it can be a ‘chicken and the egg’ consideration to determine the initial motivator. Given the correlation between the currency’s performance and Fed rate forecasts derived from Fed fund futures (or the 2-year Treasury yield), I will be looking there first and last. After a few months of unrelenting climb in rate speculation, we are finally seeming some of the pressure ebb. The probability of a fourth 50bp rate hike in September is now considered improbable. After the PCE deflator, I will be watching for the last comments from the Fed speakers on tap over the coming week as they try to get their last messaging in before the media blackout period before the June 15th FOMC decision sets in. 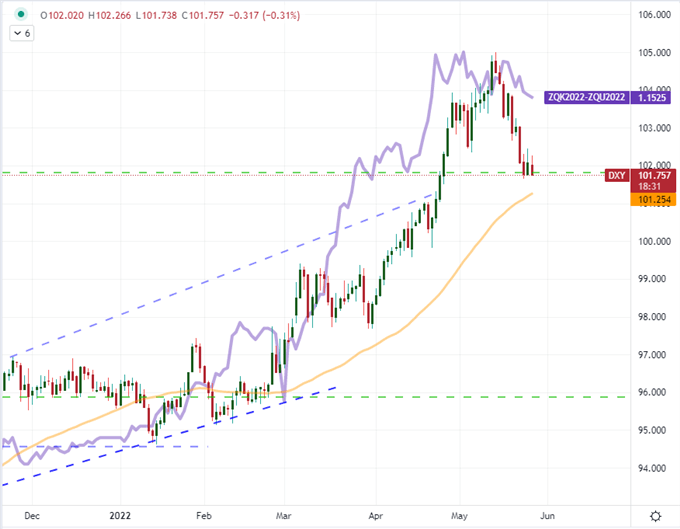 Market Influence Through the Top Themes

Focusing not on the different assets or regions but rather the top motivations, I believe it is important to keep close track of the overall health of economic activity and the course of central bank tightening. On economic fragility, we have received all manner of warnings of a troubled future. The IMF had already downgraded its forecasts at the Spring session update, but its director has warned that the outlook has already darkened further just in the past weeks. There aren’t many official growth updates due from the largest developed nations, but there are critical measures to watch. The ISM service sector activity report, Conference Board consumer confidence survey and May NFPs are a strong overview of the US. For the world’s second largest economy, the Chinese government is due to issue its May PMIs (composite, manufacturing, services) – and the previous month’s update was already reflecting serious trouble on the covid lockdowns. For more isolated influence, industrious traders should also keep tabs on the 1Q GDP updates from Australia, Canada, Switzerland, Brazil, India and Turkey. Where growth is still a wide open avenue of speculation and prone to change with each new piece of event risk, I consider interest rate speculation to still carry significant weight when it comes to influence the deeper currents for the global markets. The market has been hypervigilant with changes in monetary policy trend and there is a very active effort to price any perceived statistical change in the probabilities of the tempo in rate hikes, but the circumstances continue to change along with the market forecasts. Beside the Fed speak and Eurozone CPI on tap, there is run of inflation statistics from smaller economies. That is fodder for relative exchange rate moves, but it can also collective egg risk trends higher or lower. For official policy decision, the Bank of Canada is the undisputed champion for scheduled events. The group is expected to hike its benchmark rate another 50bp, and the Canadian Dollar has advanced significantly these past months to suggest just that. This Loonie seems to have built up quite the premium and looks very similar to its US counterpart, which is now finding itself in retreat. If the BOC throws cold water on expectations for subsequent 50bp moves, will the CAD succumb to the same near-term fate? 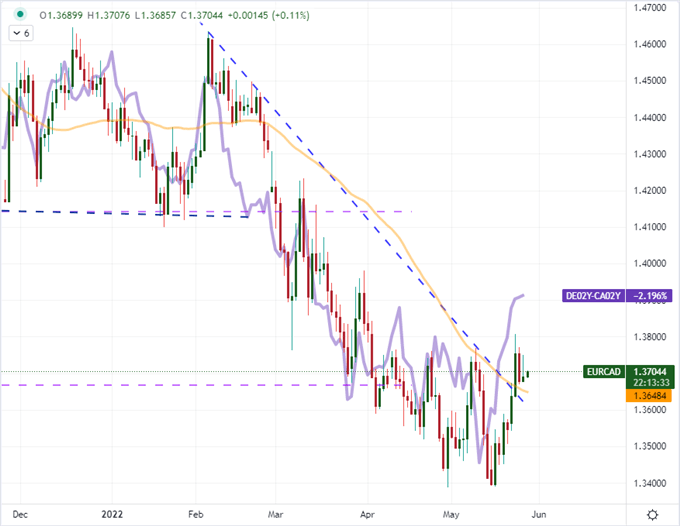