Discount Your Risk Moves Through Liquidity

We open this new trading week with a tentative rebound in the benchmark risk assets that I track. For some, the bounce on Monday has triggered a deep sigh of relief; but I feel no such confidence from the job higher. Instead, the expected drain of activity heading into the holiday weekend in the US paired with the frequent jolts of fundamentally-provocative headlines create an environment whereby extreme moves are a high risk. Tracking the matters that are most pressing the global financial markets, monetary policy remains a point of concern for global investors with key central bank speak in the next 24 hours. That said, the most loaded theme ahead looks to be economic health. These are not distinct matters however. In fact, they are converging at a critical juncture where a deeper commitment to a bear market may form. For now, the rebound from the S&P 500 after the near miss of an official ‘bear market’ close last week has offered limited optimism. Global equities markets are showing little commitment to the guidance while emerging market and junk bond risk assets continue to flounder. We await a trigger to get the market moving, but my highest priority focus remains on the distortion that thinned liquidity will create. 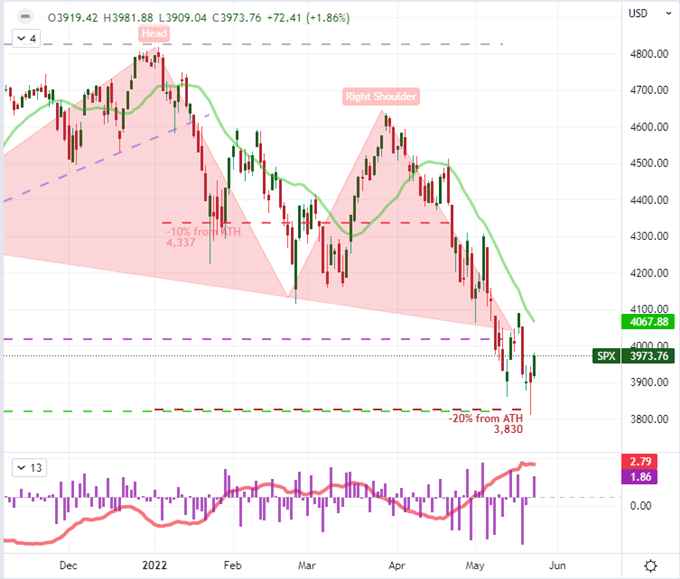 Many newer traders inherently assume a static and consistent (in assumption, limitless) level of liquidity among the major assets they intend to trade or invest. However, market depth tends to ebb and flow according to structural conditions and/or seasonal aspects. We were already seeing conditions thin out these past weeks despite the slide in benchmarks like the S&P 500, but the situation will grow markedly more arid over the forthcoming week with holiday conditions. The Memorial Day holiday will see many US-based investors start to wind down before the official close on Friday and keep them offline until the following Tuesday’s open. For the uninitiated, shallow markets would seem an inherent curb on activity; but the opposite is true. It simply thins markets and amplifies unexpected developments. That said, while volatility tends to be more extreme in bouts that develop during thinned liquidity, it can be difficult to establish follow through. On the other hand, if the volatility charge pushes the S&P 500 into an official ‘bear market’, all considerations of a ‘flash in the pan’ reaction go out the window. 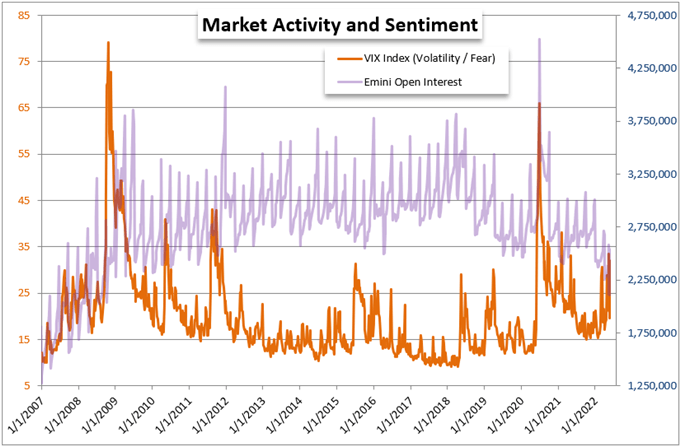 Chart Created by John Kicklighter with Data from Bloomerg

The Fundamental Themes of Volatility-Stoking Weight

With a backdrop of heighted volatility risk, it is important that we keep track of the major fundamental disruptions that can come down the wires. The top scheduled event risk on my docket is the run of May PMIs from major developed economies like the US, Eurozone, UK and Japan. This is a timely update from a GDP proxy at a time where slowing growth forecasts is further exposing central banks’ warnings that they will not abandon their inflation fight, some saying even if their economies contract briefly. It is this confluence of economic malaise and constant reminder that the ‘central bank put’ has been withdrawn that bodes very poorly for the risk-hinged capital markets. If this run of data impresses, it is likely to quickly meet skepticism after a brief relief rally. Alternatively, if it retreats this early before the consensus forecasts of pain later in the year, it could be treated as a bad enough omen to flip sentiment even before a holiday. 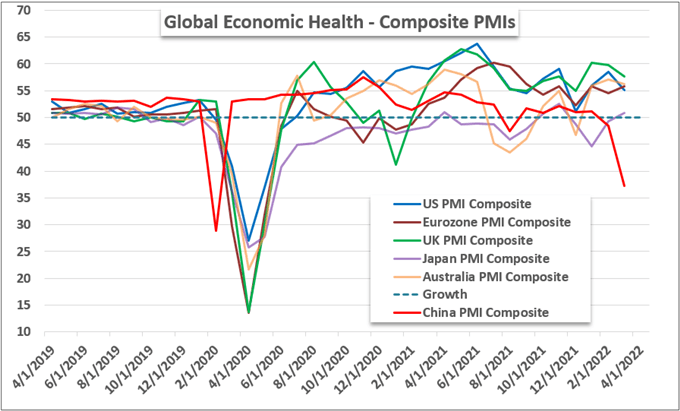 While growth concerns are a top matter given the docket ahead, here is no mistaking the constant pressure represented by monetary policy. The fight against inflation seems to be treated almost as a sacred quest by the world’s largest policy bodies and that speaks to the tolerance of capital market strain and economic retrenchment. To start this week, there was rhetoric and speculation to chew on. ECB President Lagarde further pushed the proposal of an early end to stimulus and further seeing benchmark rates move out of negative territory by September. That certainly helped push EURUSD, but US rate speculation was no slouch itself. The probability of a 75bp Fed hike at the next meeting edged up from 5 to 12 percent according to Fed Fund futures. We have both Fed Chairman Powell and Madam Lagarde due to talk in the upcoming session. It is worth tracking the sentiment that follows their statement. 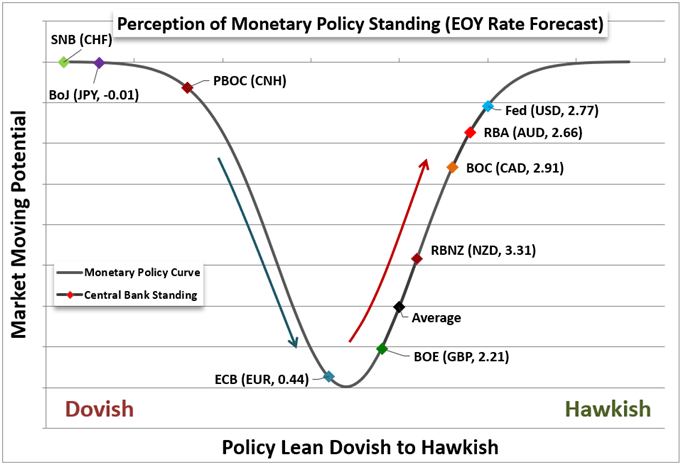 For significant market movement, there are plenty of impressive technical developments and even a few nascent trends to highlight, but the liquidity pull is a fairly wide curb on potential as far as I see it. EURUSD qualifies as a much watch for my charts because the pair has progressed through a significant former support as new resistance at 1.0635 just days after the market held the line on a double bottom of a multi-decade test around 1.350. The ECB’s emergence from negative rates is something now well priced into these markets, but I remain skeptical over the tempo of follow through on the bullish turn. If Euro-area economic data falters later today and/or risk aversion kicks in, this charge is likely to struggle if not fully fall apart. That is an ill side effect of highly volatile markets. 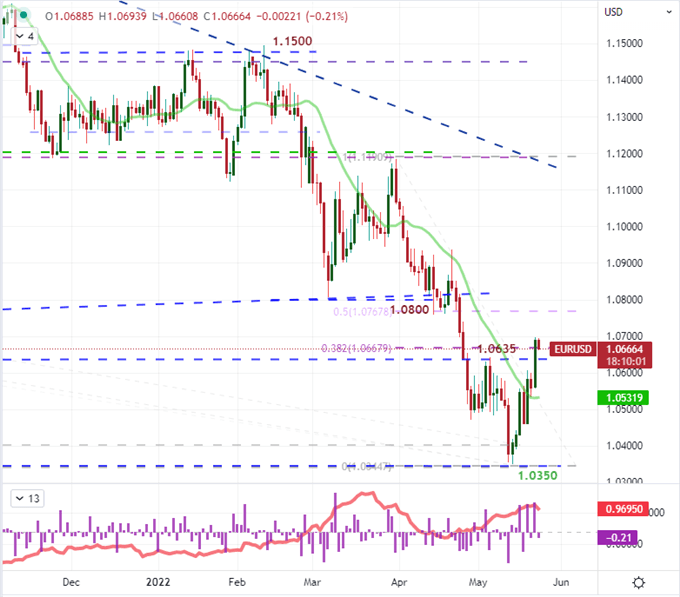 Among other major markets and currency pairs, there are interesting conditions and event risk to work with. I am particularly interested in the Sterling and Canadian Dollar’s drive despite traditional headwinds. USDJPY remains one of the most remarkable pairs to evaluate as either a barometer of risk trends versus carry appetite – and 127 is a level to watch – but it seems recent thematic focus puts the spotlight on USDCNH. With US President Biden in Asia to repair trade relations with the East, he had remarked that the White House was looking into easing tariffs on its largest trade partners. That certainly earned a further bounce back from the Yuan (drop in USDCNH), but this is not a pair where I believe traditional fundamentals will last for very long. 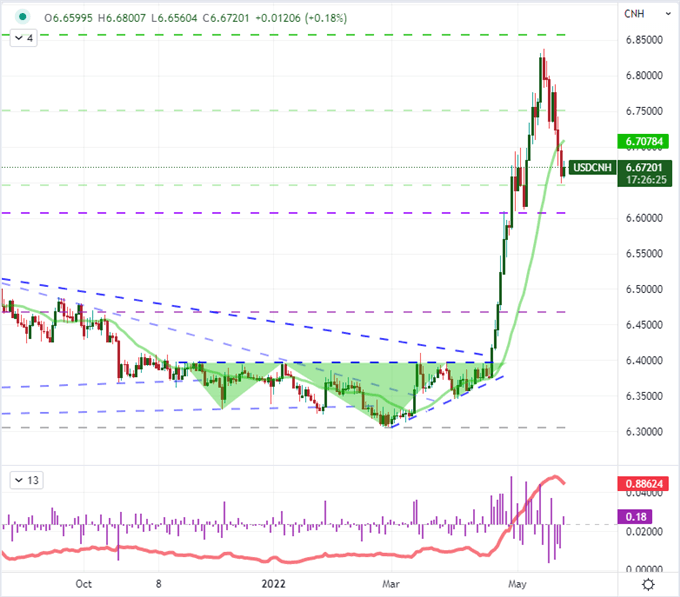