Risk Trends Took a Painful Turn Lower…But Not a ‘Collapse’

The markets, led by the US indices, took a serious turn lower this past trading session. Yet, as significant as the selloff was; we don’t seem to have hit the kind of tempo that would signal a ‘panicked’ selloff. That is important to distinguish as a more severe slump could frontload the collapse, but it would also suggest that the market move would be prone to snuffing itself out far faster than an established bear trend would suffer. For scale, the S&P 500 suffered a -4.0 percent drop for the worst single-day drop since June 2020. Furthermore, the large decline would push us to our lowest close since March 25th, 2021. That showing is painful, but it doesn’t inherently suggest a reversal is inevitable. In fact, compared to the June 11th, 2020 tumble of -5.9 percent – a severe but temporary drop – we see he contrast of a prevailing trend, a surrounding performance that does not include numerous significant losses and a fundamental backdrop that is vastly less accommodative now. In short, markets may fish for a turn, but they will not be finding it on an opportunistic, ‘panic low’. 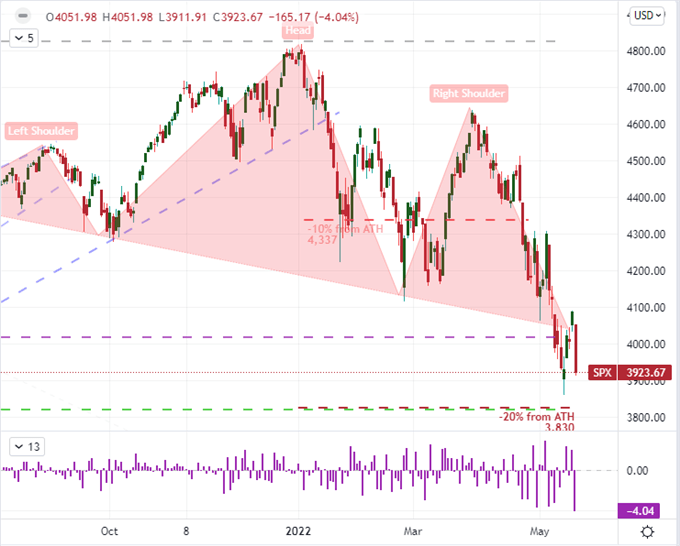 What is surprising in this reversal in sentiment is the abruptness for which some of the counter-trend (to the bullish bounce) signals have played out. Most notably, we were evaluating the ‘volatility of volatility’ measure (VVIX) pressuring the lower threshold of its two-and-a-half year range low just yesterday. This stood out as a strong measure of complacency that was unlikely to persist against a longer backdrop of fundamental downgrades and easily flappable sentiment; but I didn’t expect conviction to turn so rapidly. That is moreso a sign of the market’s struggle than it is the value of the signal. 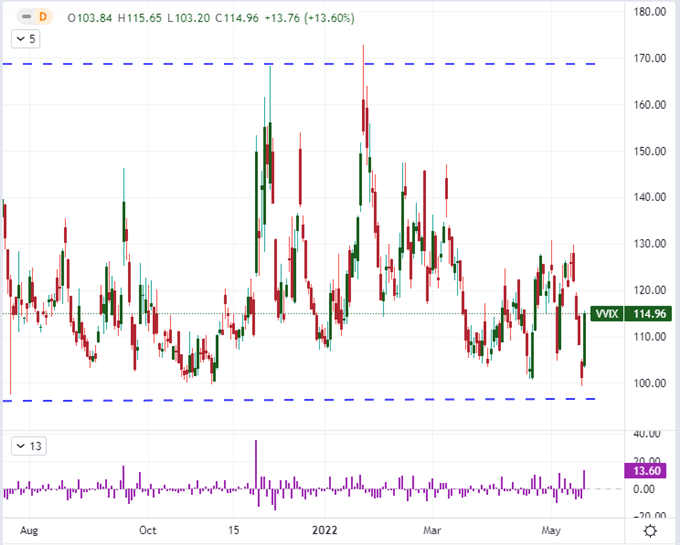 The Fundamental Winds Continue to Drive

One reason why the sharp decline in the US indices, emerging market assets, carry trade and junk bond assets wasn’t particularly surprising is the persistent warning we are receiving through the bigger fundamental channels. Growth is once such matter with the downgrade in US, European and Chinese economic health to start this week already putting us in a troubled frame of mind. The situation has found unexpected traction in the form of the earnings season. The dominant US consumer demand company Walmart started the bleeding with its -11.4 percent plunge Tuesday after its distinct earnings miss, but the further -6.8 percent drop this past session suggests the matter is more systemic. Combined, this is the worst two-day drop (-17.4) since the 1987 crash. Helping the pain along no doubt was Target’s acute 52 percent drop in profit along with TGT’s -25 percent drop in price – also a 1987 throwback. These are extreme stock moves, but don’t miss the macro signal here. Some of the largest US consumer stocks are taking serious hits on cost and supply chain issues. That is a bigger problem. 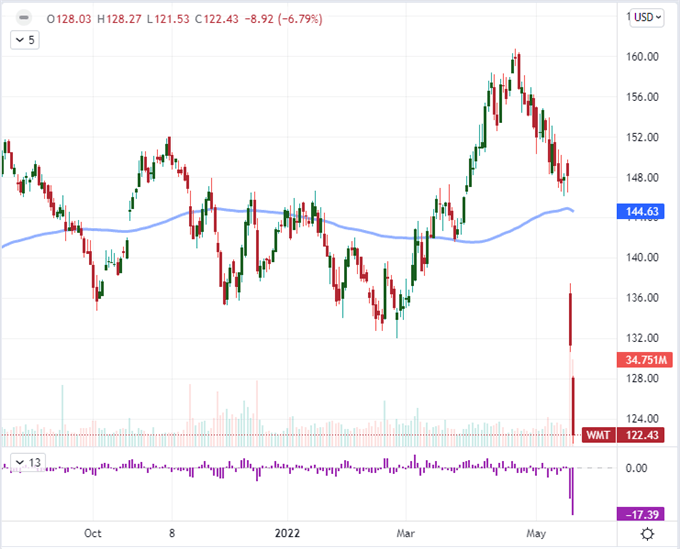 The rise in inflation pressure is not just a US corporate concern. It is clearly a top concern for US central banks and many other monetary policy leaders across the globe. There were a few additional Fed comments to note this past session o build upon the traction from the broad warning issued by the policy authority through numerous interviews on Tuesday. Notably, Chicago Fed President Charles Evans suggested that a 50bp hike next meeting is reasonable and insinuated that such a pace could be warranted ‘thereafter’. Meanwhile, Harker played to the confidence around GDP and the labor market which are being justified to ‘allow’ the fight against elevated inflation pressures. I will note that the hawkish outlook is gaining traction with the a September 50bp rate hike gaining ground and representing an upside expansion to the aggressive regime. 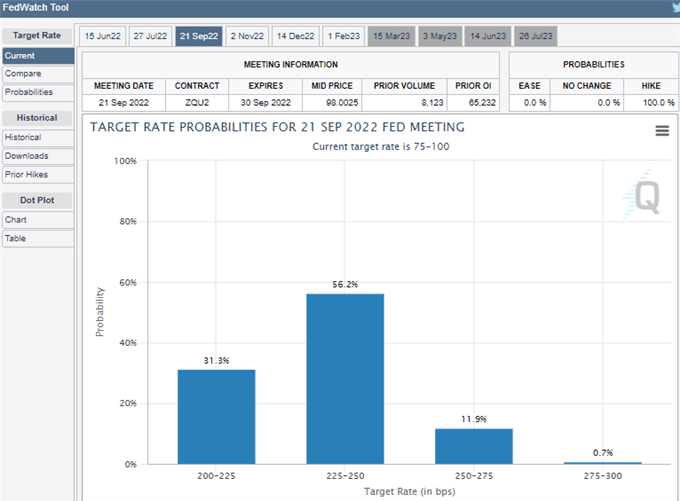 When it comes to the US Dollar, there is a unique dual mandate of market interest. On the one hand, the Greenback is a safe haven, but I consider it more a harbor to extreme measures of fear. If we do get a ‘disorderly’ perception of financial markets, the US currency benefits. Alternatively, the USD is also a carry trade opportunist. With the Fed officials warning us that they intend to hike so long as financial markets are operable and the economy is not collapsing into recession, it breaks through the perception that there is a ‘Fed put’ immediately at hand. That is proving a serious threat to risk trends, but it is not delivering a persistent lift to the Greenback. Why? We know the US central bank intends to be aggressive with its policies moving forward, and have in turn priced in quite a bit of tightening. What isn’t well priced is the dovish side’s closing of the gap. Expectations of an ECB hike in July and subsequent possibility of more firming in the second half of the year is leaking into expectations. I believe that may eventually push EURUSD back above 1.0635…and sooner than may be expected. 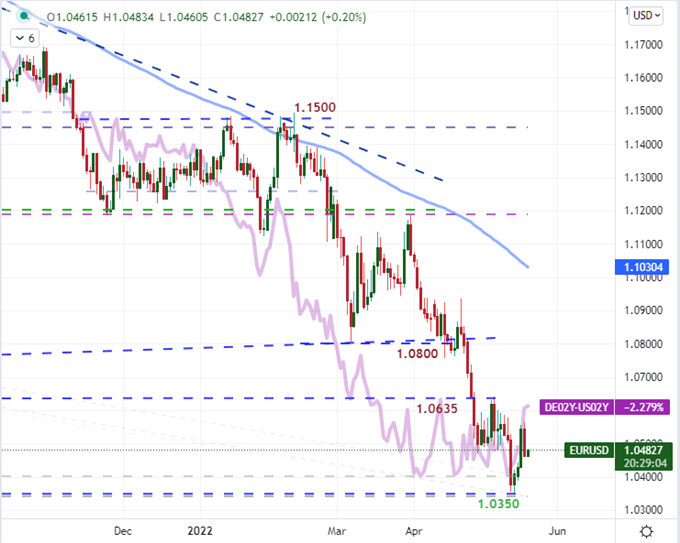 Another unique view of the competing themes is USDJPY. The cross is certainly a measure of carry trade differentials given that the Bank of Japan’s governor has recently reiterated the need to continue to purchase JGBs (though a Reuters poll suggests Japanese business leaders feel the stimulus needs to be culled). That is a serious contrast to the Fed’s hawkish-regardless-of-headwinds attitude. That said, carry trade only offers benefit so far as risk appetite supports the seeking of yield differentials that are historically tepid. Notably, the pair slid this past session showing that ‘risk off’ was more influential the carry forecast upgrade. Even if you don’t intend to trade this pair, it is a great measure for the importance of the most prominent fundamental themes. 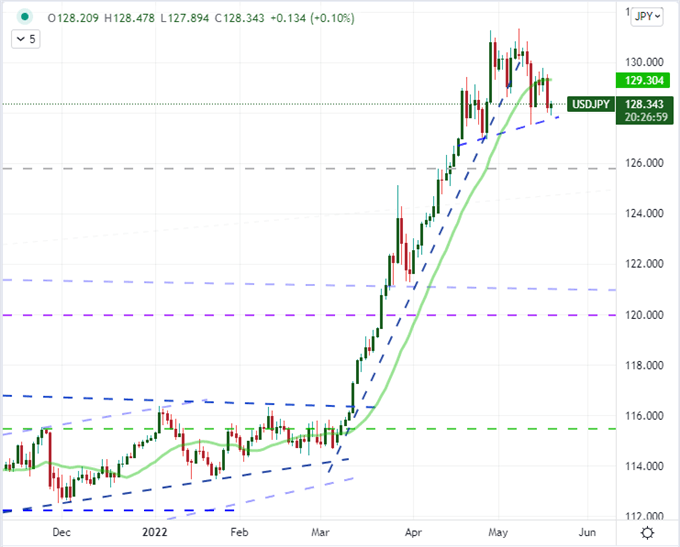