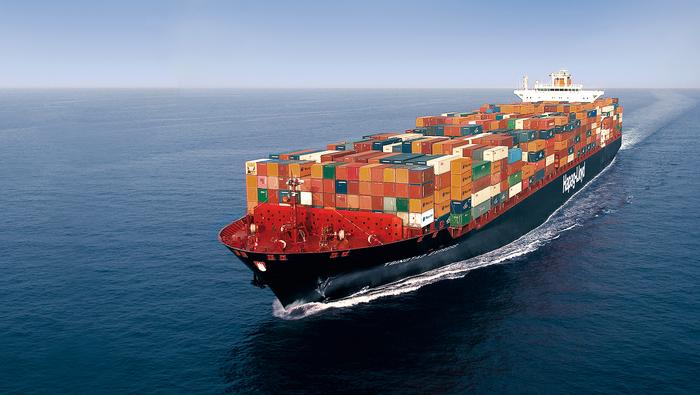 The clouds continue to gather for the global financial system – and now the economy – but the markets seem content to resort to the same sense of complacency that has colored most of the past decade. While we have certainly seen plenty of ‘irrational enthusiasm in the face of overwhelming odds’, the reward that can be expected for overlooking such risks is growing extreme in its imbalance. As such, rallies like the one we saw from the S&P 500 this past session look seriously suspect. Perhaps the return of liquidity from European and APAC markets helped to bolster a ‘sell the rumor, buy the news’ response to the IMF’s growth downgrades and financial system warnings; but relief is not a footing for outright conviction. The US index is still ping ponging between the midpoint of the 2022 range (4,467) and the midpoint of the February to March recovery effort (4,377) but the six-day range is the narrowest we have seen since the start of the year holiday conditions. In other words: a break is likely ahead. Everything held equal, a break higher would likely be a struggle while a return to the congestion floor a breakdown would carry more potential. Of course, those scenarios need to account for what would motivate either outcome. 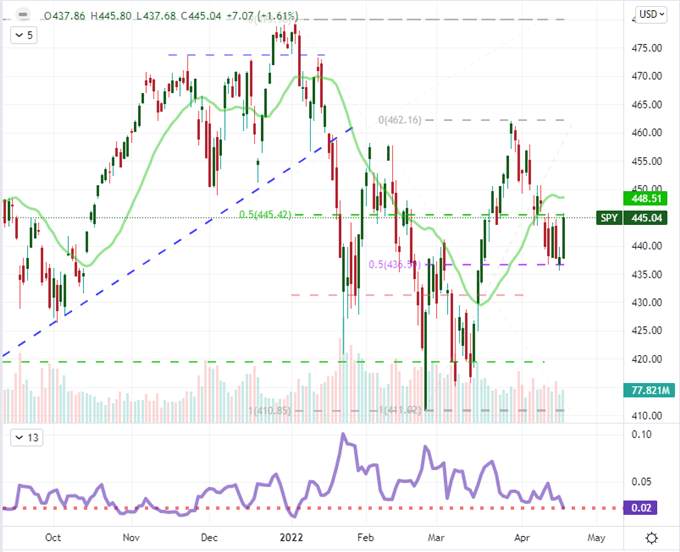 One of the disconnects to be found in the challenging fundamental path ahead is the longer timeline for many of the highest profile themes to overtly threaten the increasingly short-term focus of the speculative rank today. The economic gears grinding under rising inflation or higher interest rates moving up the cost of funds on already leveraged exposure is a measure of months, if not more. The convenience of complacency has been a serious factor in performance for years now. That said, fissures in confidence that are more immediate and perhaps closer to the source of a seemingly self-sustained US equities engine could breach the calm. That is why I will be paying close attention to how the major indices trade pre-open and through the first few hours following Netflix’s disappointing earnings report. While the EPS of $3.53 beat expectations (of $2.90), the first net loss of subscribers led to a near -26 percent drop in price afterhours. While this may be one of the least influential of the FAANG members, it still holds representation at a critical time for broader conviction. 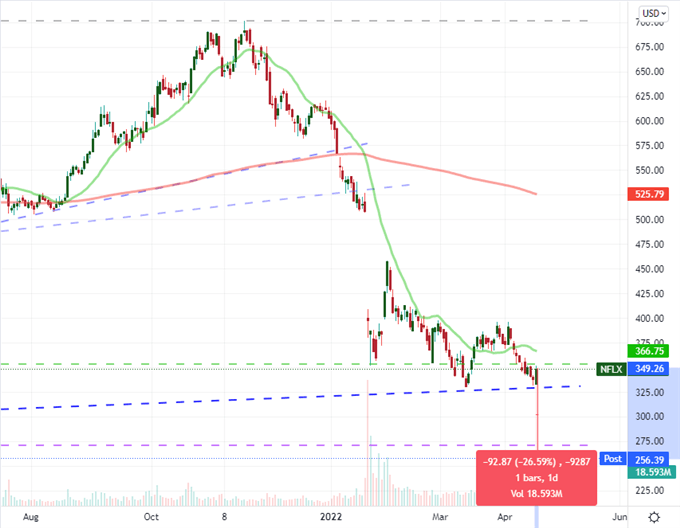 What is Driving the Markets…And What ‘Should Be’

For at least a session, the principal focus in the markets had shifted away from the race between inflation and monetary policy speculation. The IMF released its updated forecasts growth for the world and major economies/regions. The reductions were severe, but not exactly a shock given the buildup of circumstances that were in particular exacerbated by the Russian invasion of Ukraine. The global 2022 forecast was cut by -0.6 percent points (ppt) to a 3.3 percent pace with the Euro area finding a cut of -1.1 ppt (to 2.8 percent); the UK down -1.0 ppt (to 3.7 percent); Japan reduced -0.9 ppt (to 2.4 percent); China dropping -0.5 ppt (to 4.4 percent) and the US fairing the perhaps the best with only a -0.3 ppt decrease (to 3.7 percent). This contrast adds to pictures like EURUSD where the growth, rate and Russian bearings continue to diverge. Further, the sharp increase in inflation expectations from the WEO as well as the warnings from the GFSR (Global Financial Stability Report) speak of a landscape for which we haven’t likely accounted for the all the future pain. Nevertheless, the markets seem to be weathering the update through Tuesday’s close. That said, should conviction collapse, this will quickly turn into gasoline for the fire. 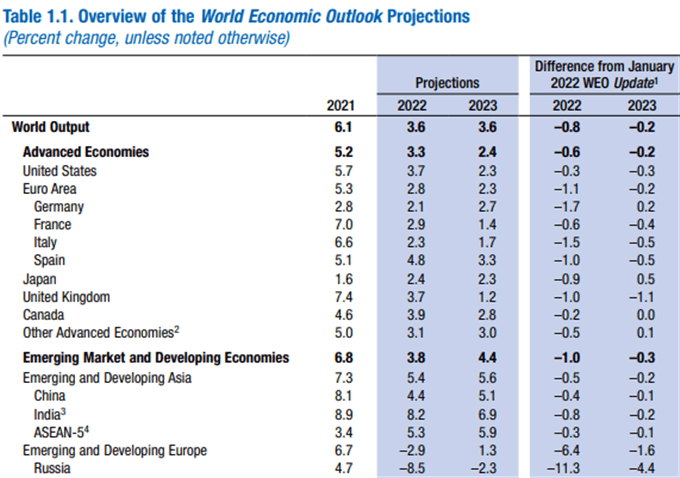 Where the IMF’s economic and financial updates were failing to gain traction in the markets, more mundane and familiar matters seemed to generate serious response. Aside from the earnings season volatility, interest rate speculation exacted further pressure on key markets. I focus on the USDJPY and USDCNH again below; but more generally, the Dollar once again benefited a concerted effort by the FOMC members to signal their intentions for May 4th before the media blackout kicks in this Saturday. One of the most dovish members in the group – Chicago President Charles Evans – stated that he saw a benchmark rate around 2.50 percent by the end of the year, which would garner his support for two 50 basis point rate hikes. That is the lower threshold of expectations from this group with Bullard’s forecast for 3.50 percent and a possible accelerated stimulus withdrawal scoping the upper threshold. The market is pricing in approximately a 2.65 percent benchmark by year-end which suggests it is not overstretched – even by Fed standards. 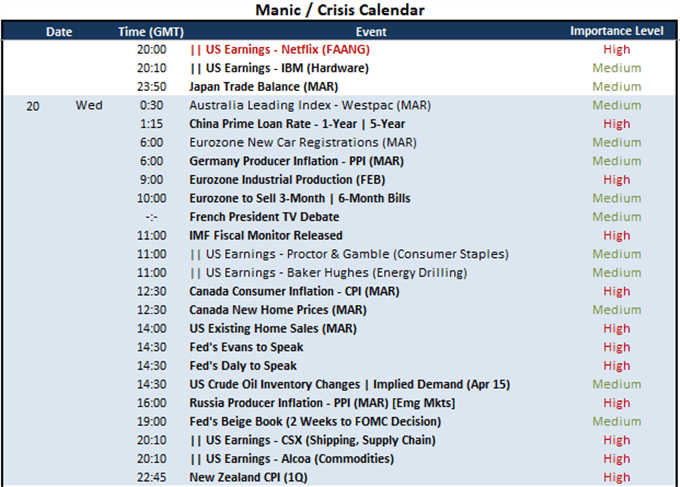 USDJPY continues to rocket higher, with the world’s second most liquid pair notching its biggest single day gain (1.2 percent) since November 9th, 2020 this past session. That is a notable acceleration on an already incredible drive to two decade highs. This charge is likely reflecting some level of belief in the market that authorities have no will to step in and curb a market that is responding to burgeoning fundamental gaps. There have been repeated remarks by key Japanese Ministry of Finance and central bank officials saying they are watching the Yen, but there has been no official announcement of intervention. More likely than not, they will not say that they are acting in the market, but there is a good probability that they will – or may already have. There is potential G7 fallout should they be seen as manipulating exchange rates, but there is also the risk of making an effort and the market simply steamrolls over the action. Loss of credibility can be a difficult thing to recover from (just ask the SNB). Keep an eye on how USDJPY in particular trades moving forward. 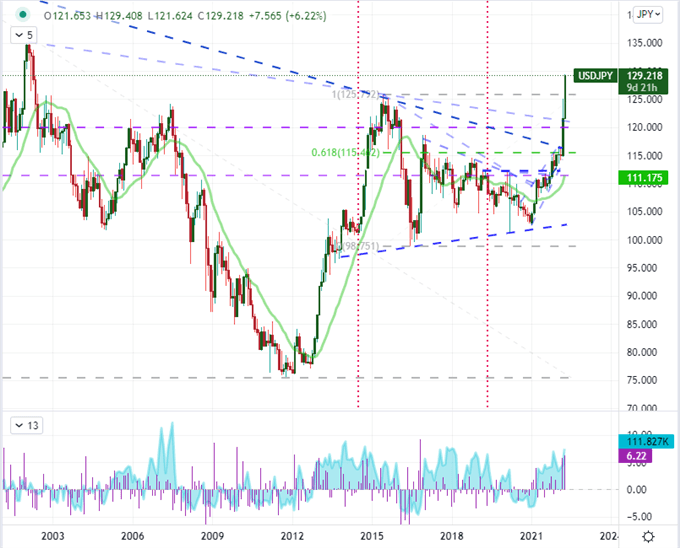 Meanwhile, where I believe the Japanese officials are closing in on intervention, it seems like the Chinese leaders have eased off of a more active role in guiding its own currency. After the PBOC announced rate hikes, Shanghai shuttered its economy to contain a Covid outbreak and the IMF dealt steeper growth forecast cuts to China; USDCNH finally cleared the 6.40 level. That is the combination of a 200-day moving average, an inverse head-and-shoulders neckline and a multi-year trendline resistance. It is a technically-significant milestone. That said, follow through is very different from a mere break under normal circumstances – and this is far from normal. 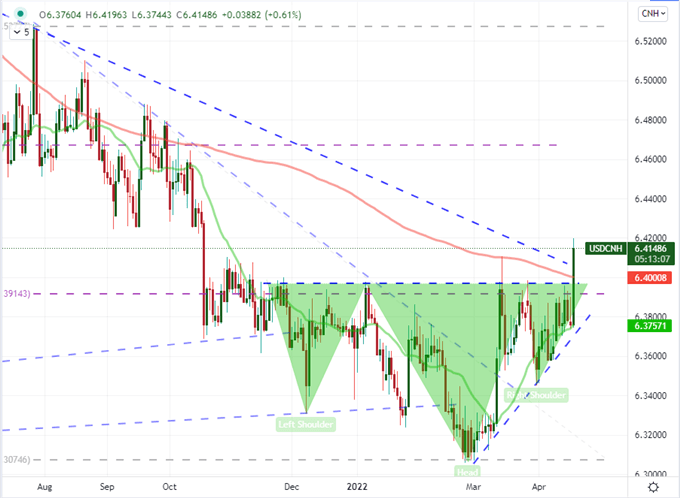