Markets Off to a Rolling Start Face Serious Event Risk Ahead

We passed through a quiet Tuesday – an event that should have surprised no one. So long as there wasn’t a seismic event in the Russian invasion of Ukraine (either a full ceasefire and negotiation or severe escalation), there was little that I would expect override the curb on liquidity we were facing. While the United States and some other major financial centers were open for trade, there was enough of the Western World offline that it would throttle any serious intentions to run the market through critical technical breaks – much less into a serious prevailing trend. That said, as the market depth fills out heading into the Tuesday trade session; we are also tracking for some major event risk. As the potential builds along with anticipation, it is worth keeping tabs on the major technical levels immediate in play. The SPY S&P 500 ETF (the most heavily traded derivative in the world by most measures) may have suffered holiday-level volume and carve out the smallest trading range in two months, but it is also positioned at the bottom of last week’s range. That 436.5 level (4375 on the underlying) also happens to be the midpoint of the post Russian invasion recovery effort from the February 24th low to the March 29th high. 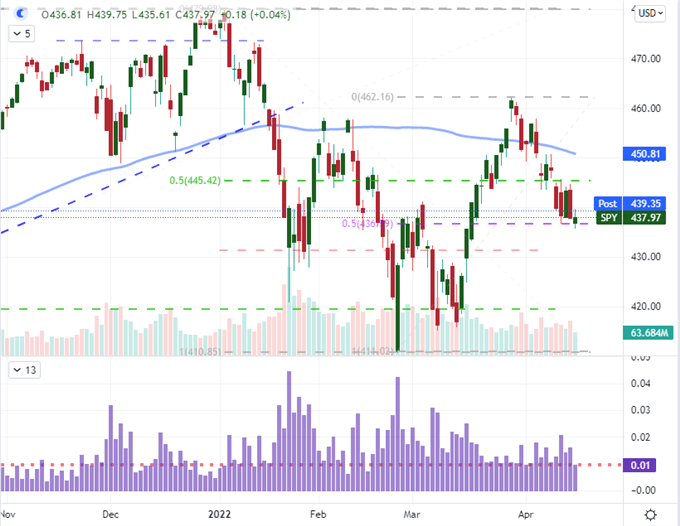 As market conditions provide the backdrop for a more systemic move and technicals are staged for provocation, I’m also tracking the fundamental sparks that can align market sentiment to a consistent course. There are very overt fundamental themes on tap through Tuesday’s active session scheduled event risk, but I am also watching for developments around equally persistent matters that are just lacking for critical sparks. For the Russian invasion of Ukraine, market amorality is leading to apathy to the human toll the war is taking; but the financial fallout from a forced default could present both a timeline for the engagement to wrap and/or the foundation of a financial crisis owing to global exposure to the country’s markets. Another theme that is not prominently on the docket but is far more consistent a pricing concern is monetary policy forecasts. The PBOC announced a 25 bp reserve rate ratio cut to take effect next week while St Louis Fed President James Bullard upped the ante on the hawkish side of the FOMC scale this past session calling a 3.50 percent rate benchmark rate the ‘minimum’ neutral rate by year end while also suggesting an accelerated quantitative tightening or ‘reverse twist’ could be utilized should inflation not settle. 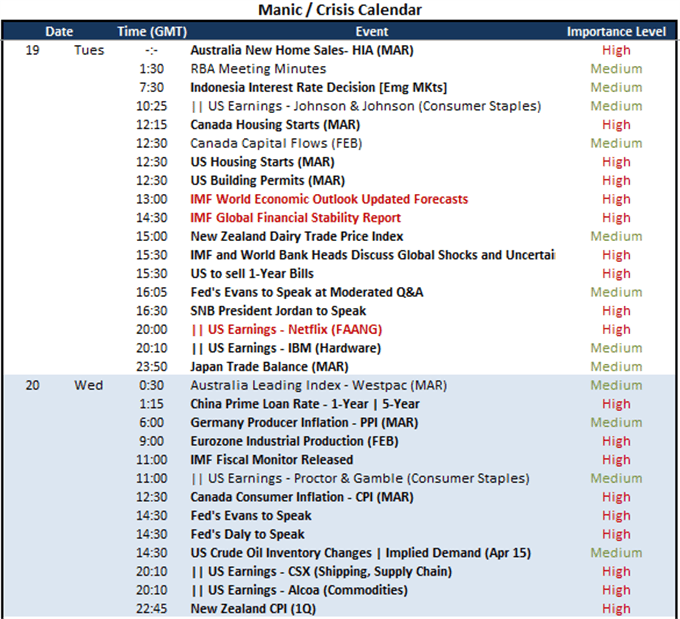 While a lot of speculation interpretation has been made around global monetary policy and the relative bearings of major regions’ central banks these past few months, the upcoming 24 hour period will see attention firmly shift towards a more rudimentary matter. While we will no doubt continue to price the intensity and breadth of a hawkish policy shift moving forward, there isn’t a lot of explicit policy insight due over the immediate horizon. That said, the outlook for the global economy will have a very explicit and comprehensive update on its future course in the form of the IMF’s semi-annual GDP forecast. The World Economic Outlook (WEO) is likely to suffer a significant downgrade for the 2022 and 2023 forecasts as a result of the shift in view for inflation persistence and the fallout from the Russian invasion of Ukraine. The global forecast was already downgraded by 0.5 percentage points at the January update (from the October official projection) with the United States being cut 1.2 percentage points (to 4.0 percent) and Eurozone easing just 0.4 percentage points (to 3.9 percent). I think those forecasts – and Russia’s in particular – will see sharp adjustments. 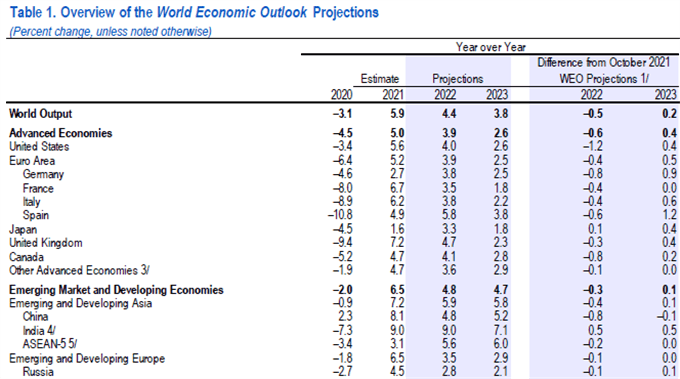 While it is tempting to look to USDRUB (US Dollar to Russian Rouble exchange rate) for the biggest reaction to the updated growth forecasts, I don’t think that exchange rate will respond like many would expect. There is also serious discount around the Russian forecast and there is no doubt significant effort to maintain stability on the exchange rate by Russian officials. This is very much like USDCNH (Dollar to Chinese Yuan) which refused to break above 6.40 despite the PBOC announcing a 25bp cut to the RRR effective next Monday. If we want a less encumbered response to the updated economic views, I would point out EURUSD. The two largest Western economies in the world are looking at equivalent forecasts through the 2022 and 2023 time frame according to the January update. That is likely to change significantly given that the Eurozone is taking a far greater hit owing to the Russian sanctions. The question is how much more adjustment is due to the exchange rate given the 6 percent slide over the past two months. A slide below 1.0800 Monday – though not a convincing break itself – certainly raises the stakes and awareness. Just remember: breaks are not inherently follow through. 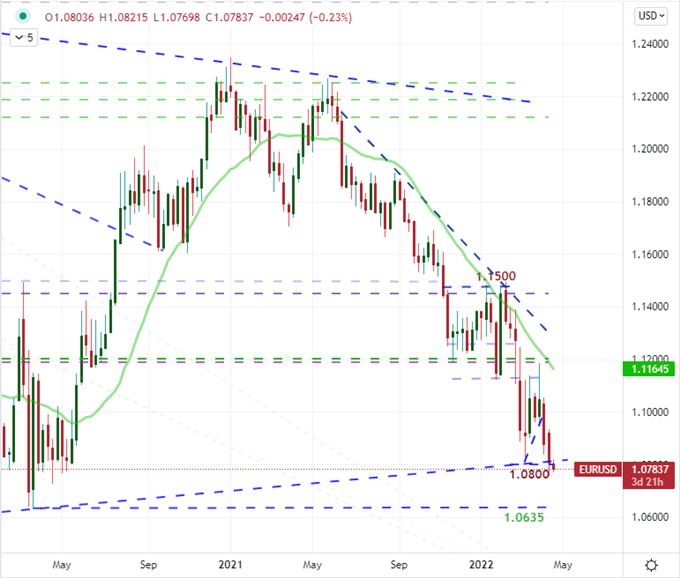 ‘Other’ Pairs to Watch for Adjacent Fundamental Reasons

While my attention for the upcoming session is heavily focused on the benchmark for ‘risk trends’ (like the S&P 500) or the those measures that look well placed to absorb the bulk of the key fundamental theme (EURUSD for GDP contrast), we should not write off other assets and themes of potency and weight. USDJPY for example is a must-watch exchange rate. Most of the Yen crosses are remarkable in their drive higher and varying levels of technical resistance, but USDJPY is the most remarkable. Having passed the 127 mark, this pair is treading at two decade highs. Once again, the Ministry of Finance has issued a statement to suggest it is watching the Yen’s plunge and takes the dive serious, but there is no overt threat. They are unlikely to say explicitly they are looking to intervene – as they got in trouble by the rest of the G7 for that some years ago – but their references are on purpose. Notably, USDJPY has advanced 24 of the past 30 trading days which is a record for at least the 25 years of historical data I’ve pulled. Reversal risk is high, whether through interest rate forecast moderation, intervention or a risk reversal. That said, wait for the market to say it is time. 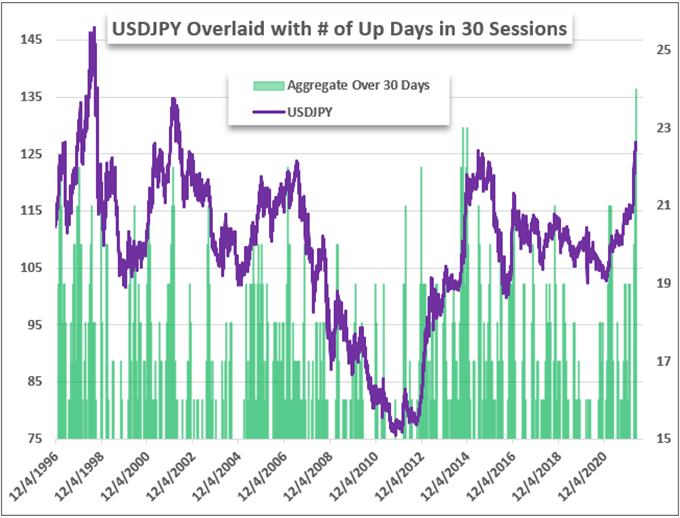 While not nearly as open a trading vehicle as USDJPY or the Yen crosses, I’m also keeping close tabs on USDCNH. For those that are at least a little suspicious that the Dollar-Yuan exchange rate didn’t clear 6.40 after the PBOC announced an effective rate cut – contrasting the Fed’s warnings of aggressive tightening ahead – there is perhaps some mental justification that is done with the better-than-expected Chinese 1Q GDP release (though those figures too are taken with a grain of salt). More likely than not, there is an effort to keep controls in place with USDCNH; but if we finally do break, clearing the boundaries will point to something perhaps much more significant. 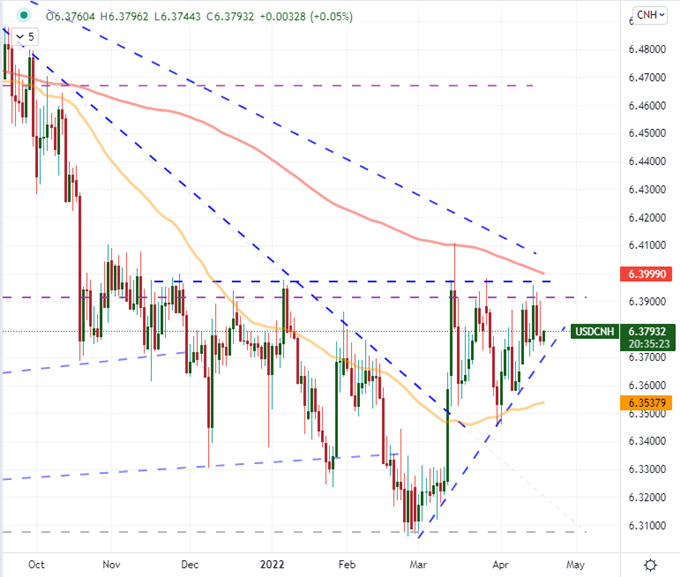