EURUSD Bounces at 1.0800 with Dollar Ending 9-Day Rally and ECB Ahead

We have traversed some serious fundamental landscape this past trading session and Thursday’s docket is looking just a precarious. Between inflation pressures, interest rate forecasts, growth downgrades and earnings; there is plenty of opportunity to stir the market to significant movement. However, developing a move out of a spark of volatility requires a substantial market backdrop. With a forthcoming liquidity drain, conviction will likely be very difficult to muster through Thursday and Friday. April 15th is Good Friday and therefore a market holiday for Australia, Canada, the Eurozone, United Kingdom, United States and many other Western economies. While there are markets that will be open – including Forex and crypto – the absence of a large swath of market participants will significantly curb serious efforts to drive the financial system. That critical distortion has likely played a role in the rebound in the S&P 500 and other prominent ‘risk’ assets this past session. To commit to momentum with such a backdrop would be invite substantial short-term risk to ambitious bears. As such, bullish or bearish through Thursday’s session; I will be hesitant to register any volatility into a serious trend effort. 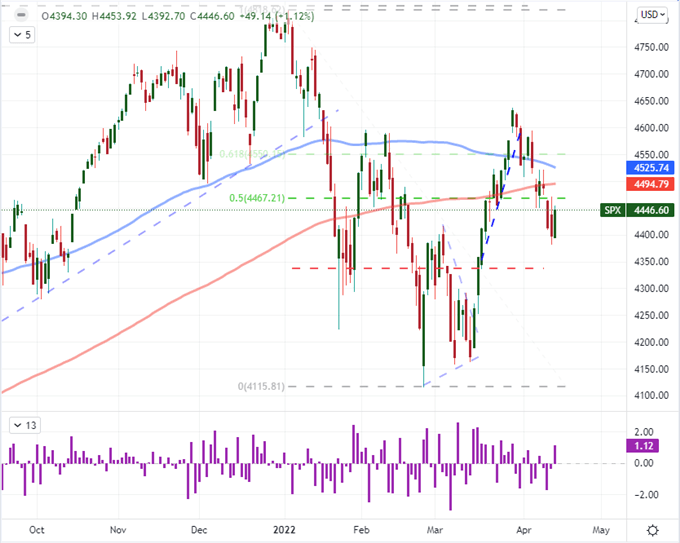 While my skepticism around speculative commitment is set very high moving forward, that doesn’t mean that we will have an uncontroversial period ahead. Given the density of the economic docket – not to mention the lingering, abstract matters like the Russian invasion of Ukraine – there is high probability for volatility. In general, there are themes that should be monitored for their capacity to spur action in more than just a single asset. Inflation has US import prices, but I am more focused on ‘live’ commodity prices after the US reported a record 11.2 percent swell in March PPI. Price pressures inherently fuel rate expectations, which has provoked aggressive Fed speak and 50bp hikes from both the Bank of Canada and Reserve Bank of New Zealand. South Korea’s and Turkey’s central banks aside, Thursday will be defined by the European Central Bank (ECB). This is one of the few hold out doves, but the market is increasingly skeptical that they will be able to hold back the tide. For earnings, we are due the balance of the major banks which will tap into a variety of macro themes. And, don’t forget growth forecasts which will find fuel in US data – like retail sales and consumer confidence – as well as a preview of next week’s IMF Spring updates with the so-called ‘curtain raiser’. 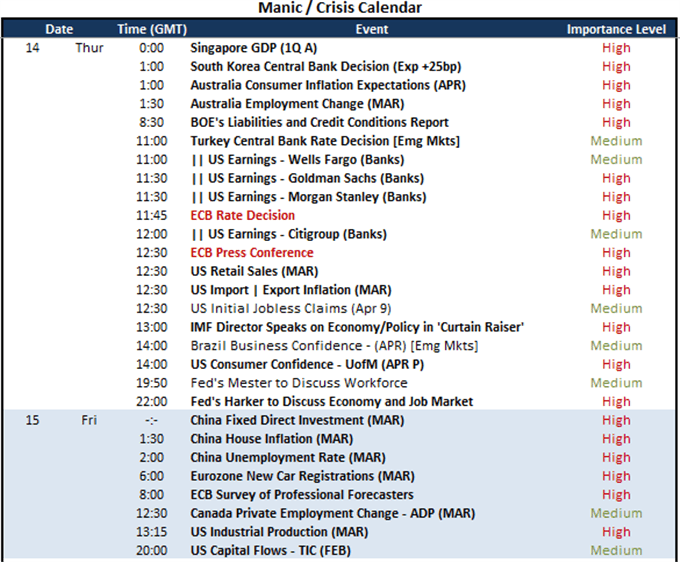 What to Watch Through Thursday

In the hierarchy of market-moving fundamental themes, I believe that the opening barrage of earnings data will likely struggle to connect to systemic measures like the S&P 500 and Dow. That is not because the corporate accounting doesn’t matter to the markets-a-large – quite the opposite is true – but rather because the liquidity drain will push forward the responsibility of significant repricing. That said, the update we received from top bank JPMorgan this past session (EPS of $2.63 per share against $2.69 expected on a 42 percent drop in profit to $8.3 billion) led to a significant -3.2 percent drop in JPM. That performance alone is troubling, but the macro reasoning given by CEO Jamie Dimon is far more disconcerting. In his brief remarks, the bank’s leader said Russia’s invasion of Ukraine, supply chain throttled growth and inflation were creating serious problems. Now we will see if this is really just poor adaptation from JPM or an industry affliction as earnings from Goldman, Morgan Stanley, Citigroup and Wells Fargo is on deck. If they all show similar pain, expect the market to pick up on the warning. 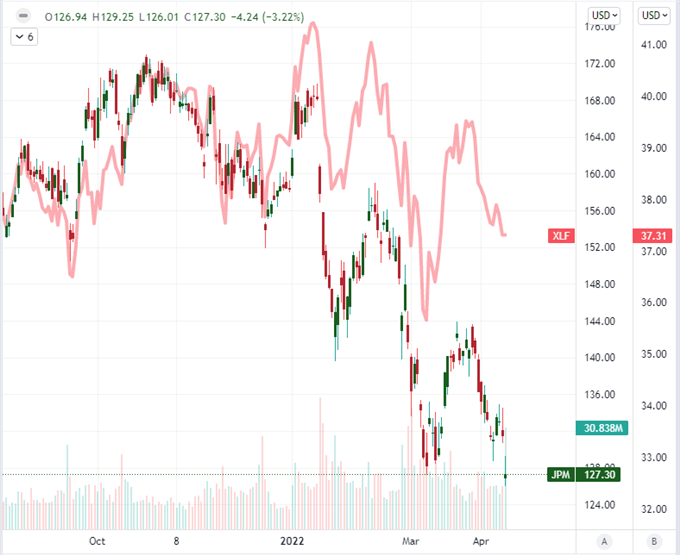 While there is a lot going on Thursday, top scheduled event risk through the session for me is absolutely the European Central Bank (ECB) rate decision. The fact that this group has deviated so significantly from its US, UK, Canadian, New Zealand and Australia counterpart is what makes its policy decisions so critical. Along with the Bank of Japan and Swiss National Bank, the ECB represents a last bastion of complacency for global investors who act (even unconsciously) under the assumption that monetary policy makers will do whatever they can to stabilize the markets from any serious slips. That notion has been fading, however, which has amplified FX volatility and threaten the buoyancy of global capital markets. The ECB is very likely to keep policy steady, so the 11:45 GMT decision is not likely to trigger any substantial moves. Instead, the press conference from President Lagarde 45 minutes latter will represent the real fundamental heft. Will she tacitly approve the market’s approximately 60bps worth of hikes priced in through 2022 and thereby close the door on dovish holdout hopes? We have seen EURUSD rally off a very conspicuous 1.0800 support. That was helped by the Dollars (DXY Index) first drop in 10 trading days, but it seems just as much a Euro move as the Greenback. 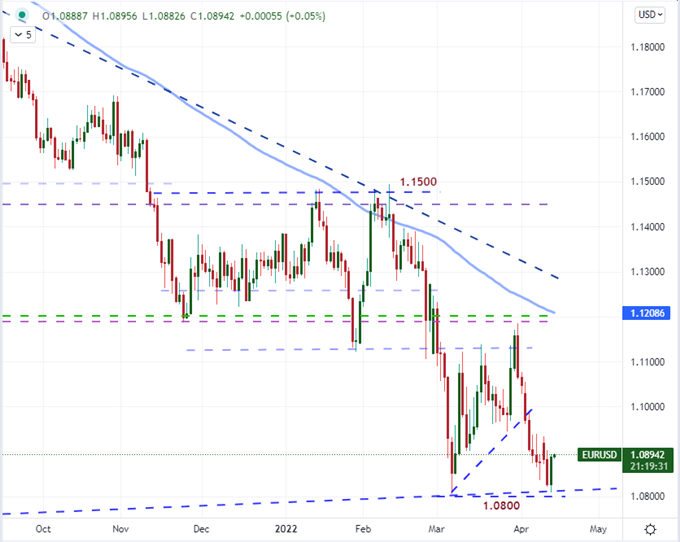 Wait…Did they Not Hike 50 Basis Points?

‘Buy the rumor, sell the news’ is one of the most overused expressions in investing, but it has a basis in market norms. Financial markets are forward looking and thereby speculation tends to adapt current asset prices according to what is expected over the measurable future. So, even if there is a significant fundamental development on the calendar or the headlines, its impact depends significantly on how much the market had adapted to the outcome before it was made official. The two major central bank rate decisions this past session showed just how much influence advanced speculation can have on price action. The Bank of Canada (BOC) announced that it was hiking its benchmark 50bps to 1.00 percent and would start reducing its balance sheet starting later this month. That is a substantial move, but it essentially conforms to the aggressive forecasts that had already guided expectations for the BOC along with its US and New Zealand counterparts (all expected to hike 216 bps from Apr 1 to year’s end). While CAD didn’t drop sharply after the news, it did struggle. Compare that to the Pound where mere multi-decade inflation data would exert greater lift to GBPCAD than could the Loonie’s response. I’m watching to see if this reversal can gain traction. 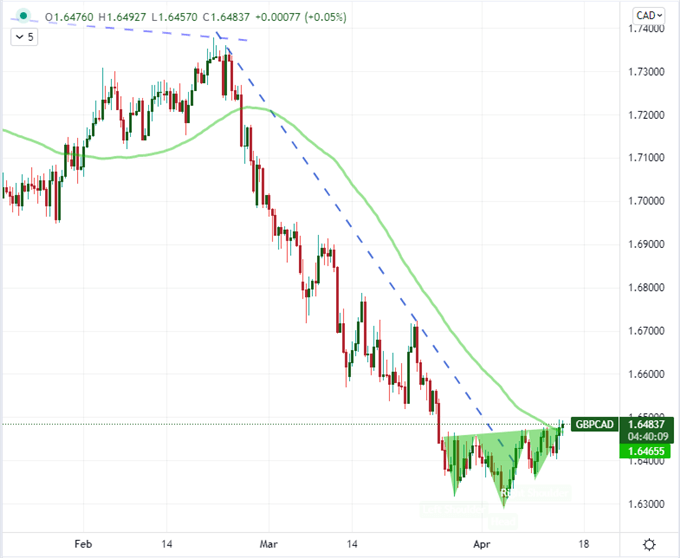 Keeping the counterpart currency the same (the British Pound), it was clear that the New Zealand Dollar’s response to the its own 50bp hike to 1.50 percent was met with even less awe. The biggest rate hike in 22 years – and anticipation of further tightening ahead – did the Kiwi Dollar no favors at all. In fact, the currency dropped against most counterparts, including the US Dollar and even the Japanese Yen – on a day where risk assets jumped. I have to say that the GBPNZD pair was most technically interesting though, as its own wide-range reversal is playing out well. The biggest rally (1.8 percent) since September 2019 is nothing to overlook. 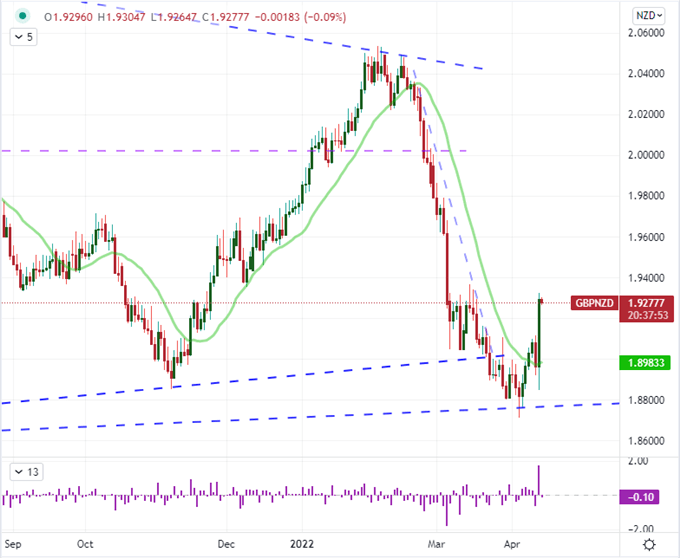