There are a number of competing themes for our attention, but it seems the relentless drive around inflation is firmly in control of sentiment for our day-to-day volatility and general trend. While there are economic implications to higher prices – such as a likely reduction in GDP – the dominant concern at present is around the implications for monetary policy. This past session’s top event risk (US CPI) threw fuel onto the rate speculation fire, resulting in a drop in risk-leaning assets in general; but it was the Dollar’s charge that cuts through the noise of the volatility. With Fed forecasts calculated through Fed Fund futures pricing an 87 percent chance of a 50 bp hike at the next FOMC meeting (May 4th) and another 90 percent chance of a further 50 bp move on June 15th, we have managed to nudge rate forecasts even further. These markets continue to impressive. For the US markets, that has translated into an incredibly consistent, 9-day rally for the trade-weighted DXY Dollar Index. That matches the longest charge since November 2016; and we haven’t seen anything longer since way back in 2012. This is an extraordinary run, and it is statistically at-risk of moderation. 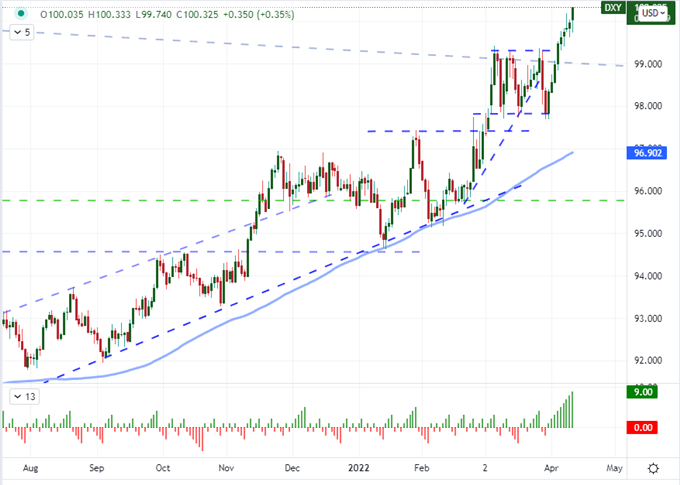 US monetary policy isn’t just a matter for the US Dollar and American assets relative to global counterparts. It also taps into more generalized investor sentiment given the country’s role as a guide for worldwide sentiment. There was a distinct slide in global indices (via afterhours products like futures and CFDs) as well as measures like emerging markets. Yet, the most indicative measure for market volatility for me was the S&P 500 itself. This past session, the index opened to a hearty upside gap and some further morning advance following the US CPI’s print. While the four-decade high 8.5 percent headline figure was slightly higher than the official consensus forecast, the White House’s warnings on Monday evening of “extremely elevated” price pressures seem to have softened the blow. Nevertheless, the fundamental weight was obvious and the widest S&P 500 trading range (as a percentage of spot) since the March 16th FOMC rate decision reflected the focus. The fear is not yet self-sustaining, but the markets are ‘looking for a reason’ to unwind risk exposure. 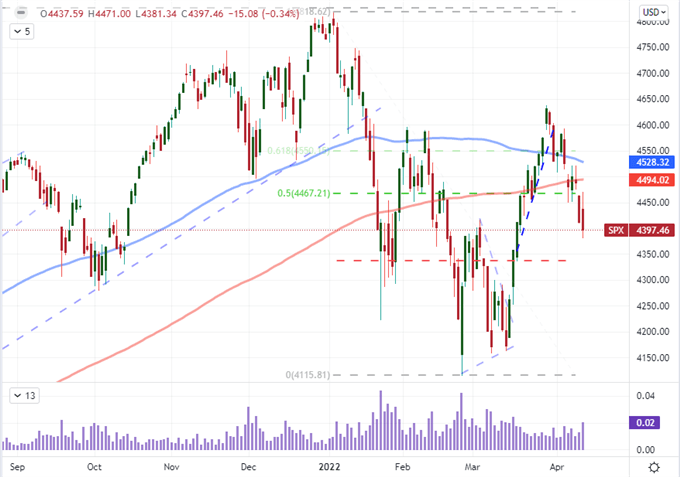 The Major Event Risk Ahead: Rate Decisions; GDP and Earnings

Inflation is a critical fundamental theme for which the market will need to continuously contend with, but it isn’t the terminal market driver for all volatility over the coming sessions. Far afield of the principal fundamental focus lately is the attention paid towards corporate earnings. However, the earnings season will kick off in earnest over Wednesday’s session. There are a range of companies due to report their performance before and after hours, but my attention will be on the meme-stock credentials of Bed Bath & Beyond, the Covid sensitivity of Delta Airlines and the market balance reflected in top money manager BlackRock. At the very peak of the list though, we have JPMorgan, the largest bank in the world and whose CEO has warned the Russian sanctions could translate into as much as a $1 billion hit for the giant. I think the exposure to Russia could prove far more massive. Earnings aside, growth forecasts are something to keep close track of through high-level data releases, especially after the WTO has downgraded its GDP forecast for the world from 4.7 percent expansion down to 3.0 percent in 2022. All told, the greatest upheaval to the speculative order through fundamentals likely resides with rate forecasts. 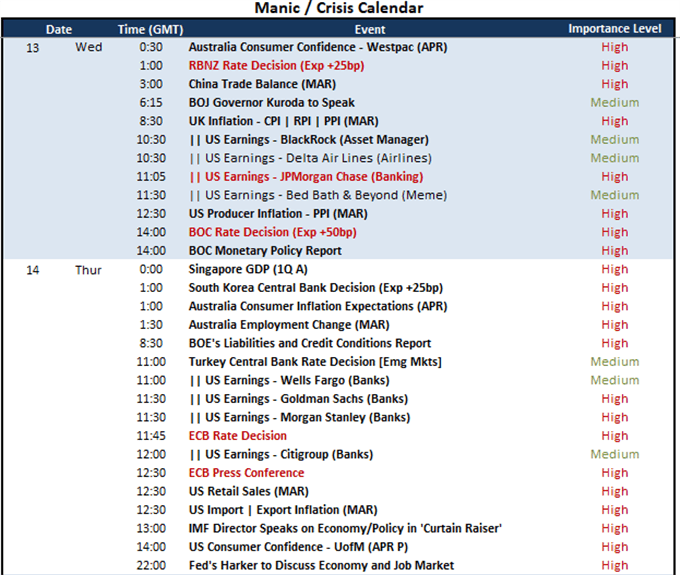 If you have been tracking monetary speculation, there are few more dramatic disparities in benchmark forecast than the course projected for the ECB and the Federal Reserve. The European authority has made a concerted effort to position itself as a conscientious dove that will not budge from its policy position, even if inflation is a problem. In distinct contrast, we have the Fed that has been warning the world that a stiff policy of tightening is ahead. The Dollar has clearly benefit, but that contrast also translates into the pricing of benchmarks like USDJPY (where intervention speculation is gaining serious foothold above 125) and EURUSD which is dealing with multi-year support at 1.0800. FX traders are already watching closely, but I think this is a staged fight that all macro-minded market participants should be following. 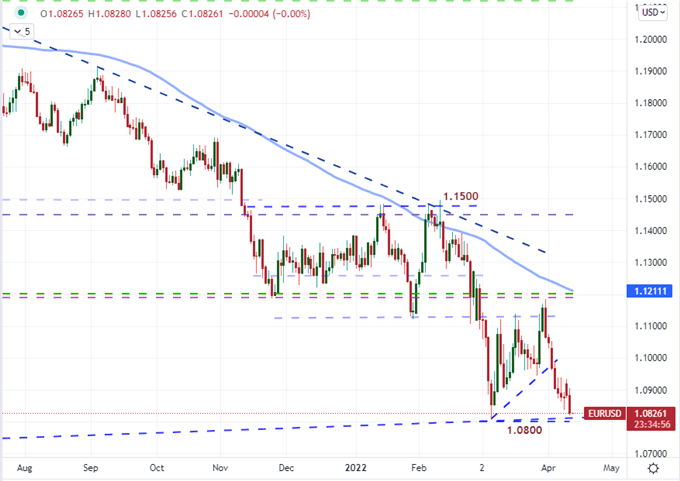 Overall, the most potent fundamental event risk over this next 24 hour period is monetary policy directed. The RBNZ (Reserve Bank of New Zealand) was expected to hike 25 bps according to the economist consensus, while swaps were more aggressively leaning towards a 50 bp move. With the ‘rest of 2022’ forecast projecting a 216 bp worth of hikes through year-end – commensurate to the Fed and Bank of Canada outlook – it would be difficult for the Kiwi to live up to expectations. That said, the actual 50 bp jump generated exceptional traction for the New Zealand currency after the decision hit the calendar. Where do you look for this kind of event. Pairs like NZDCAD are most concentrated for scheduled event risk, but competing event risk will split focus. Pairs like NZDJPY and EURNZD may be appealing for pairing ‘hawks’ versus ‘doves’, but I like a less extreme contrast where speculation will have been too well fleshed. That’s why I like sister currency pair AUDNZD which has leaned against the Kiwi despite its distinct statistical advantage. 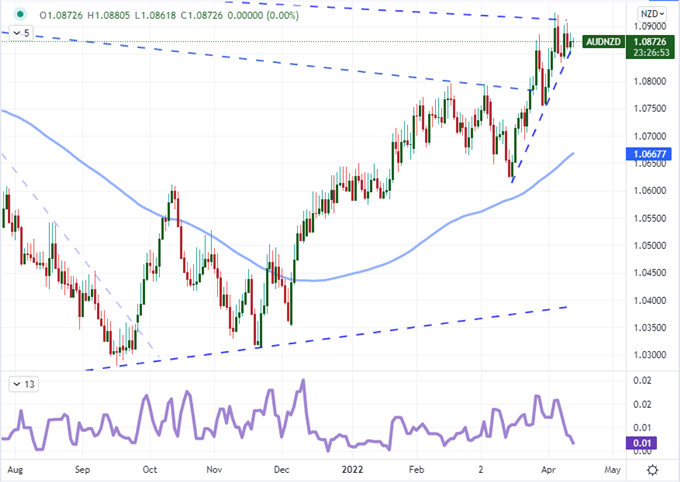 The other major event risk over the coming session is the Bank of Canada (BOC) rate decision, which is itself expected to result in a 50 bp hike from 0.50 to 1.00 percent. That is an outcome heavily priced in, but there is still serious potential around the event. If the BOC fails to hit with that doubling of the benchmark rate, the market will be ‘disappointed’ on the Loonie. However, I think it is more likely that they meet that expectation and the forecast will play a bigger role. Given how strong the CAD Dollar is, it seems ‘easier’ to disappoint. If that is the case, GBPCAD is appealing for a reversal candidate – particularly if the UK inflation data is notably strong. 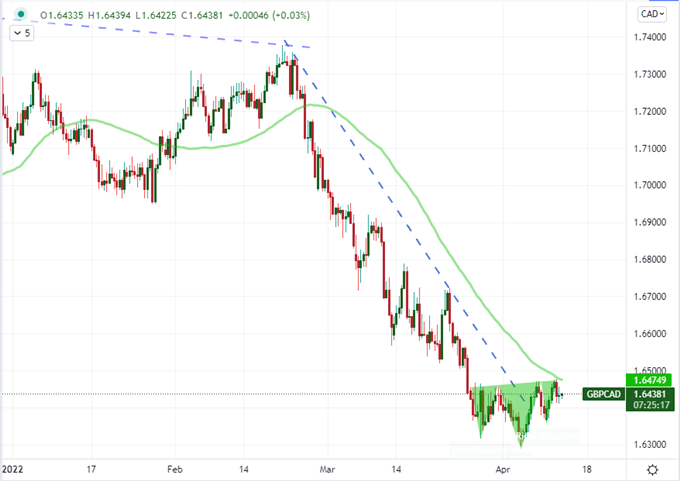