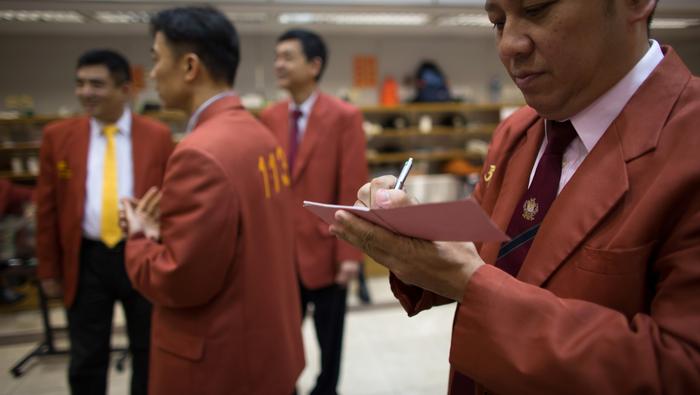 We have made the transition from the opening quarter of 2022 to Q2 without a definitive shift in speculative conviction. There is still a buoyancy in risk appetite that seems to benefit a sense of aloofness around the big picture fundamental risks that still the market horizon. Heading into the first full week of the new month and quarter, I will keep close tabs on the developments around Russia’s invasion of Ukraine as well as the evolution of monetary policy speculation for the developed world. That said, my top concern moving forward is an aggressive and seemingly improbable threat further out: recession risks. The markets are forward looking and therefore speculative. So, while a meaningful downturn in the global economy seems generally improbable after such a strong post-pandemic recovery, the speculative masses are entertaining the threat and the implications of its financial impact. As far as ‘risk’ measures go, the S&P 500 is still my preferred one-look, convenient measure; but conviction has notably flagged with the past three week’s recovery rally. For a more sensitive gauge to precede the broader metric, I’ll turn back to the Nasdaq 100 to Dow Jones Industrial Average ratio as the ‘growth to value’ comparison. 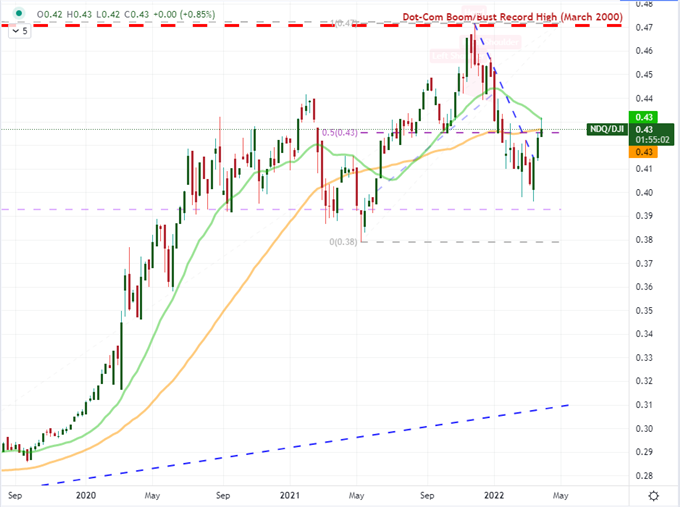 When it comes to fundamental currents hitting the capital markets, the majority of the systemically important themes have been less prone to sudden shifts in course as of late. Rate expectations are growing more concrete in their general hawkish bearing while recession fears seem a little ephemeral at this stage. As for the situation in Ukraine, there remains capacity for a sudden course change that can hit the broader market. General fear of the Eastern European war catalyzing a broader and more open-ended financial crisis has seemingly abated. On the other hand, the implications for higher energy and grains commodity prices as a consequence of the war have reached the threshold of their supply-side optimism. Standing on the technical border of its own pullback, WTI crude oil futures prices are testing the 50-day moving average and trendline support around 96.50-98.00. If that floor holds, it is likely to draw attention back on the supply-side troubles that the US SPR release was meant to address. 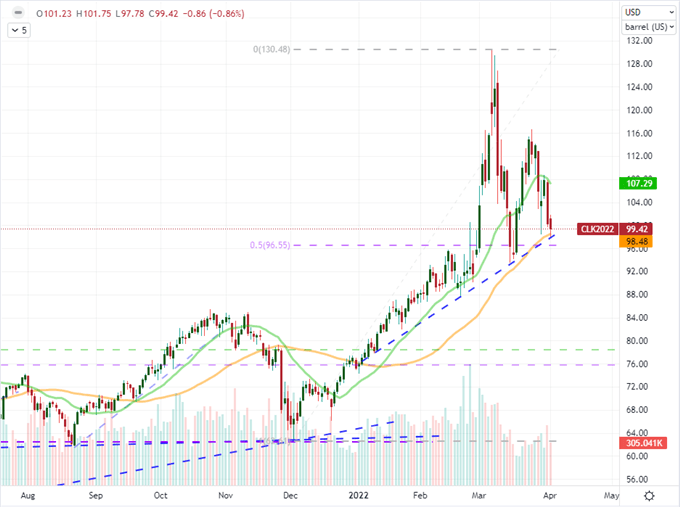 Looking out over the coming week of trade, there are few of the all-consuming scheduled events that I would consider to be capable of single-handedly setting the course of the global markets. While there is no event akin to last month’s FOMC rate decision shifting in the perception of the developed world’s monetary policy course, there are more than a few updates on tap that can affect serious volatility on more than a small corner of the financial markets. Aside from commodity prices resulting from Russia’s attack on Ukraine, we are due a few key updates from the former country’s docket pertaining to the month of March. Given the PMIs are assessed by a third party (Markit) and the country’s foreign reserves can be tallied through the global community of central banks, we are due an honest overview of the impact sanctions are having. For monetary policy, the Australian and Indian central banks are on deck for rate decisions. However, I am just as interested in the FOMC minutes this week given the importance of central bank stimulus withdrawal over increases to short-term interest rates. And then there is the data that can be connected to timely GDP readings. Sentiment surveys are top of my list, but the ISM US service sector report is a very indicative measure of GDP in the world’s largest economy. 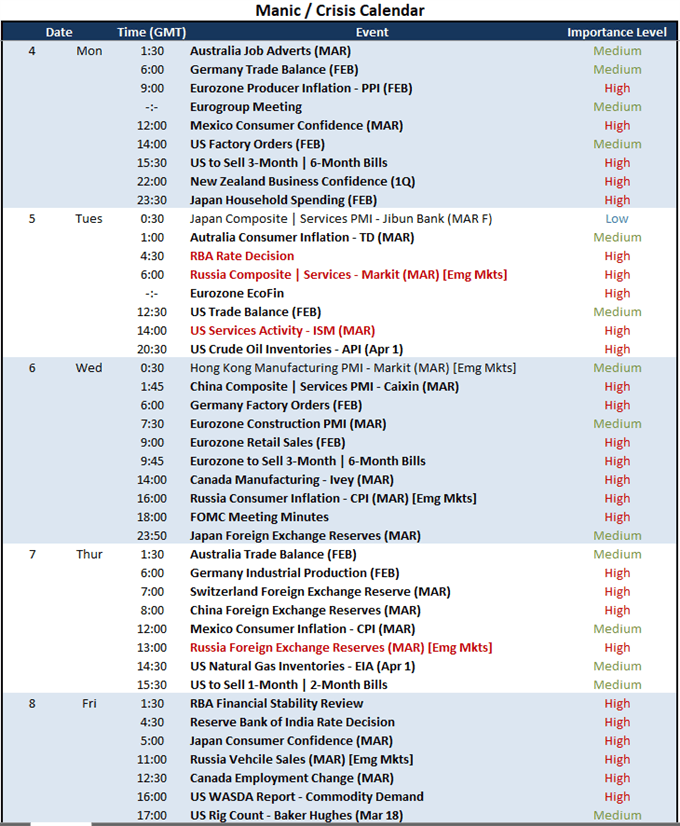 Speaking of competing fundamental themes, there is little doubt that the situation in Ukraine or rate speculation can exact serious influence over the markets we trade, but I believe the general view of economic health carries serious potential moving forward. Through the end of this past week, the BLS reported the US economy added 431,000 new jobs to the economy – a smaller increase than expected but still very robust – while wage growth grew a health 5.6 percent. That generally encouraging data, but it wasn’t what I was watching. Instead, the ISM manufacturing update which dropped 1.5 points unexpectedly (to 57.1) carries more weight. While still well above the growth/contraction threshold of 50.0, the slowdown is unmistakable. That is especially true give the US 10-year to 2-year Treasury yield curve tipping into official inversion to close the past week. While there is reason to seriously dig into the signaling from this measure’s risk caution, speculative interests frequently do not question beyond the headlines of ‘recession warning’. If the ISM service sector report signals a similar or deeper retreat Tuesday, be wary of the interpretation.

Chart of the US 10-Year to 2-Year Treasury Yield Spread, Services and Mfg ISM Activity (Monthly) 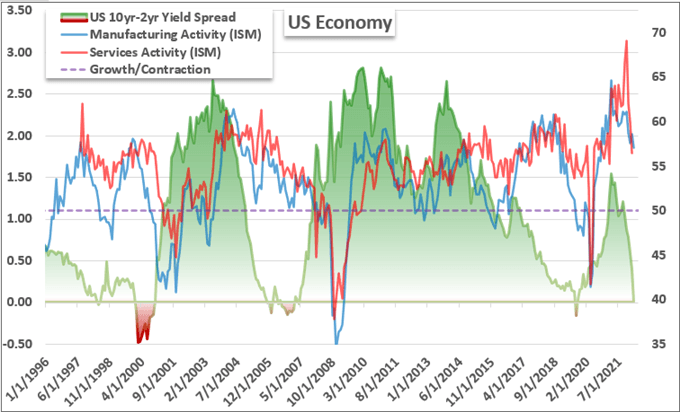 Chart Created by John Kicklighter with Data from FRED and ISM

Fed Expectations and the Dollar

While I am watching the market for its indulgence of ‘recession’ headlines and the commodity inflation fallout from the attack on Ukraine, there remain pressing systemic themes worthy of our attention for volatility or even trend development potential. The Fed’s policy plans are a top consideration for global risk interests – not just sentiment in the United States. The minutes from the FOMC’s rate decision last month is worthy of a close look, even if the updated projections and Powell’s press conference were aimed at providing clarity. Markets are not exactly rational, so new information without the benefit of central bank spin shortly after the black-and-white text hits the wires can be absorbed with a more explicit view for the markets. As it stands going into the new week, Fed Funds futures were pricing in a 73 percent chance of a 50bp hike at the May 4th meeting and 80 percent probability of another 50bp move come June 15th. How this view changes with or without data should be a top trader priority.

Table of Interest Rate Change Probabilities for the FOMC

Table from the CME’s FedWatch Tool

At the convergence of risk trends, rate speculation and commodity inflation lies the Australian Dollar. The currency carries connection to all of these major themes. AUDUSD is a pair that pits two hawks against each other, but the sentiment implications and direct impact from Tuesday’s RBA rate decision make for a more charged fundamental potency. I will also point out that the pair’s trading range through the end of this past week is the narrowest since early December 2019. Generally, a breakout is a high probability event, but direction depends on the spark while follow through is a matter of conviction. And, if we are looking at specific pairs, USDJPY is another worthy focus moving forward. While no Japanese officials have come out and said they are going to intervene on behalf of the Japanese Yen at any specific level, the market seems to believe 125 is a point that will spur action for a country that must buy most of its commodities on the foreign market. 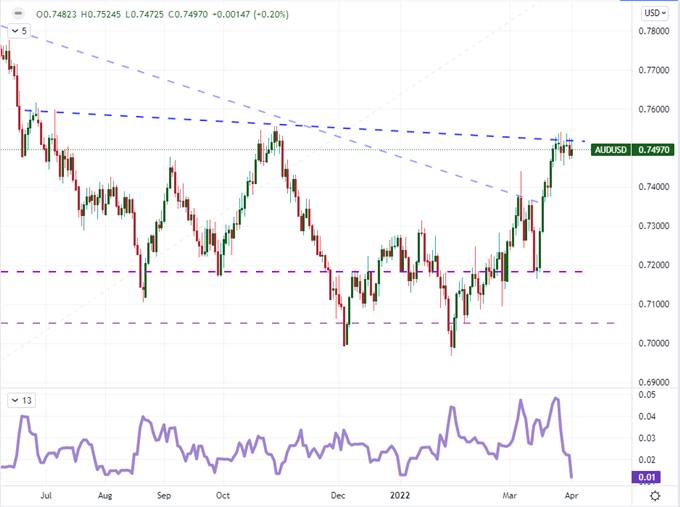