There is no mistaking the hawkish lean of the Federal Reserve after the group announced its policy mix this past session. And yet, the market’s responded to the event as if it had offered up relief with a wide range of risk-sensitive assets charging higher after the afternoon event. Some will look to the silver lining (eg the market had already priced in the outcome or the Fed’s policy drive shows confidence in the recovery), but I believe the market response to be more two dimensional and elementary. It looks more like a speculative drive urged by the passing of an open-ended but enormously influential event. Then there was also the headlines related to the 21st day of Russia’s assault on Ukraine. According to some reporting, Russian President Vladimir Putin was ready to negotiate peace, which would be very welcome by a battered Ukraine. Yet, that hope eroded quickly as the day wore on with the White House Press Secretary stating that Russia has shown no sign of de-escalating which was followed by US President Joe Biden’s remarks that he considers Putin to be a ‘war criminal’. The veneer of a fundamental support has fallen away, but the markets have yet to lose the gained altitude. 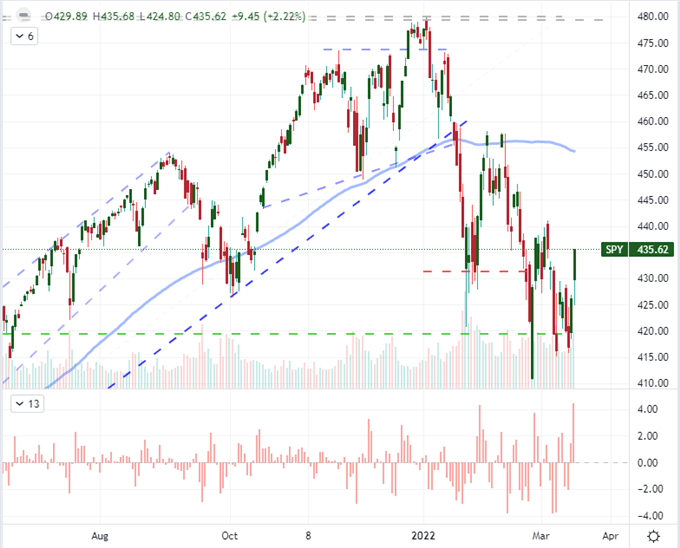 Just how disruptive was the FOMC rate decision Wednesday afternoon? The only thing that was truly in-line with my expectations was the 25 basis point (bp) rate hike to a range of 0.25 – 0.50 percent. While I do believe there was a strategy that could be employed with a bigger move at the opening, they Fed went the predictable route. The next stage of interpretation would go to the central bank’s own interest rate expectations that were offered in their Summary of Economic Projections (SEP) which saw the rate forecast for 2022 rise from 0.90 percent (more precisely 0.875 as it is a range) to 1.90 percent. Including this month’s hike, that is a total of 7 hikes which would include every meeting for the rest of the year. Furthermore, Chairman Powell and the statement made clear that quantitative tightening (reducing the balance sheet) would start soon – as soon as the next meeting on May 4th. 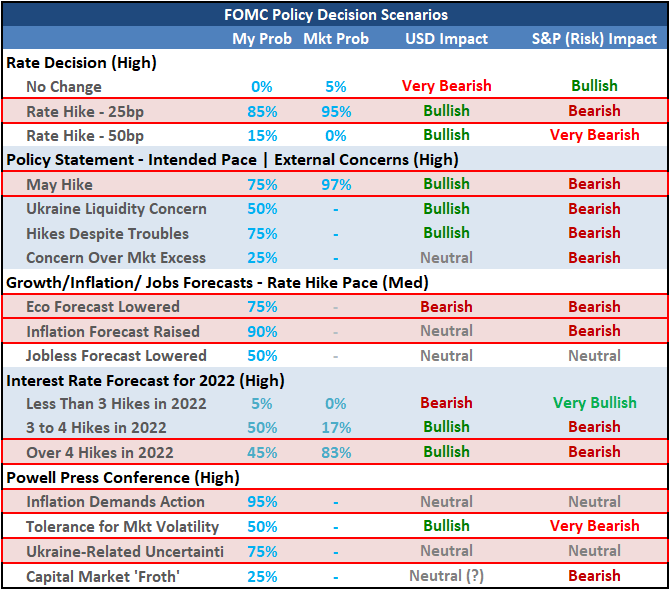 If there was any doubt as to how the market interpreted the Fed’s actions, you only need to look at the close interest rate tracking assets. The US 2-year Treasury yield touched 2.00 percent intraday Wednesday, but it was the Fed Fund futures that were most telling. Implied forecasts through the end of the year priced in 176 basis points worth of tightening from March through December 2022. Given that the standard move by the US group is 25 bp, that would equate to ‘certainty’ of seven hikes by year’s end. What continues to be interesting is the Dollar’s divergence from those rate forecasts. The DXY trade-weighted Dollar Index actually lost altitude through this past session. You can chalk that up to a greater retreat for the safe haven role relative to the carry appeal, but that seems to prescriptive to me. In general, I think the Fed’s signal bolsters not only the US rate forecast, but the projections for the other major central banks as well. If the US is confident to take this past, what will stop the UK, Canada, New Zealand, Australia and others? 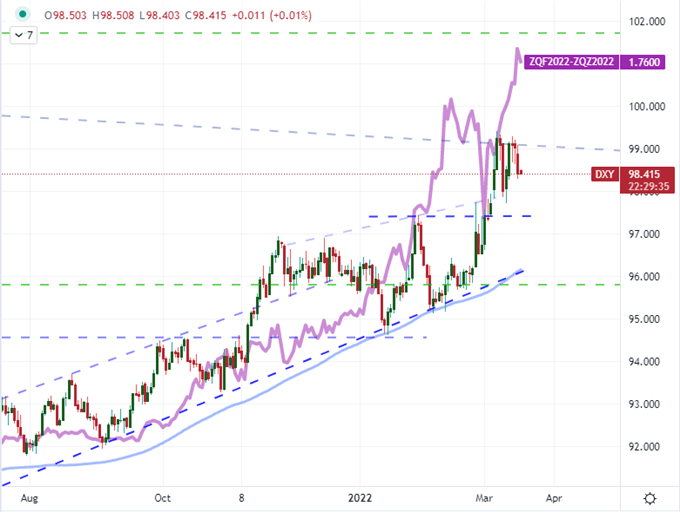 While I can see a ‘rising tide lifts all boats’ argument for interest rate forecasts for the major currencies, the incredible performance for certain risk-sensitive assets stands out as exceptionally dubious. Perhaps the most extreme example is the astounding 8.1 percent rally for the EEM emerging market ETF. This cross section of the global financial system is notoriously sensitive to the financial beneficence of the developed world’s liquidity infusions. To raise short-term rates and drain excess funds from the system is a direct pressure on the more risky areas of the world’s economy. A relief rally can make as much sense here as the S&P 500, but the biggest single-day rally since early 2009 seems to be unreasonable. I will watch this particular benchmark as my ‘leading risk indicator’. 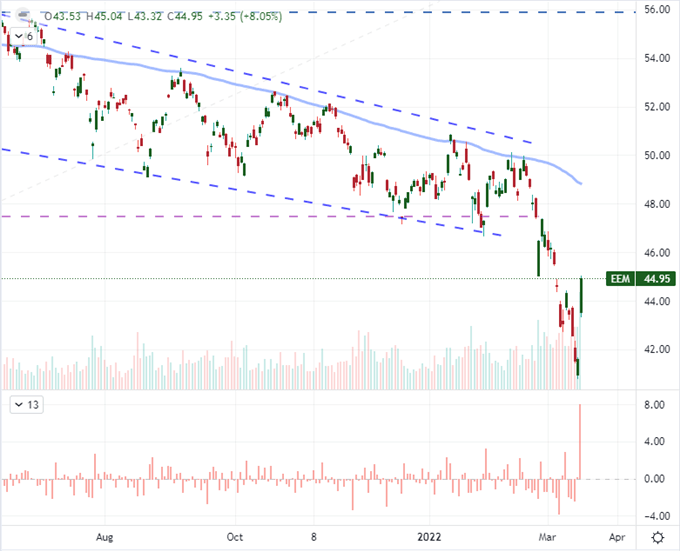 What’s Ahead: Event Risk and Sentiment

With the Fed decision in the review mirror, we have to move on to the next round of critical event risk – and there is quite a bit on tap. That said, my focus will remain split on the evolution of the Ukraine-Russia war and the development of global monetary policy. On the former point, we have passed a deadline for Russia to pay a coupon payment to foreign holders of its sovereign debt with country representatives suggesting it was paid while the bond holders say it was not. The matter may come down to exchange rate risk as Russia reportedly attempted to pay in Rubles, but paying any denomination outside of the pre-determined currency could be construed as default. There is a 30-day grace period, but rating agencies are likely to call it well before we get to mid-April. Meanwhile, on the docket, the density of event risk is still very much monetary policy focused. My top concern is the Bank of England (BOE) rate decision given the group is expected to hike 25bp and it comes directly after the Fed decided to join the party. I’ll be watching EURGBP or GBPNZD for this event rather than Cable. Meanwhile, the Brazilian, Turkish and Indonesian authorities will offer their own updates; while New Zealand non-resident bond holdings and ECB President Lagarde’s speaking engagement are adjacent event risk. 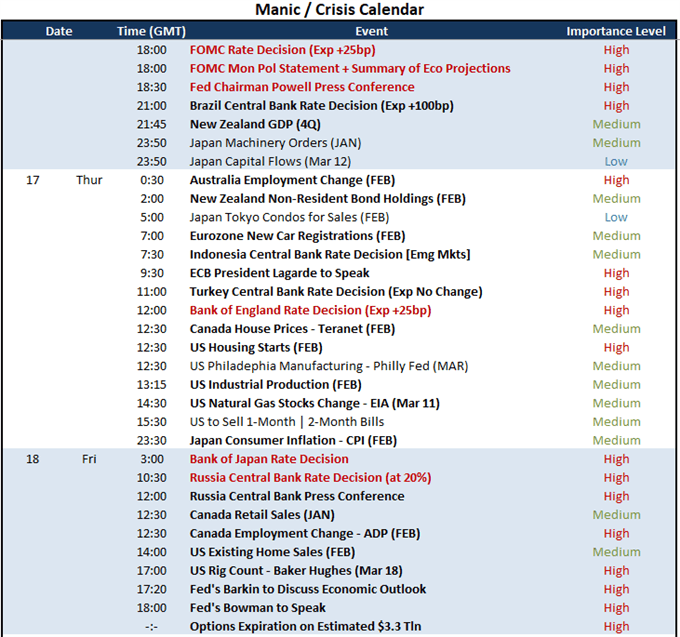 Given my suspicion of risk trends, I’m looking for the milestones that will show exhaustion in the ‘risk on’ charge we have seen – but I’m also seeking out better positioned candidates for a sign of turn. While the S&P 500 may have seen a sharp reversal just recently, it is coming off of lows and thereby isn’t particularly stretched as a sentiment gauge. USDJPY, on the other hand, is stretched on both a fundamental and technical basis. From the latter perspective, the pair has rallied for eight consecutive trading days which is the longest unbroken run since the start of the recovery after the Great Financial Crisis (early 2009). On the fundamental side, the carry appeal hasn’t helped the Dollar broadly, risk trends are dubious in my eyes and the commodity influence on Yen crosses has lost its altitude with reversals like that seen from crude oil. I’ll wait until there is confirmation of a retreat, but I’ll be looking for it. 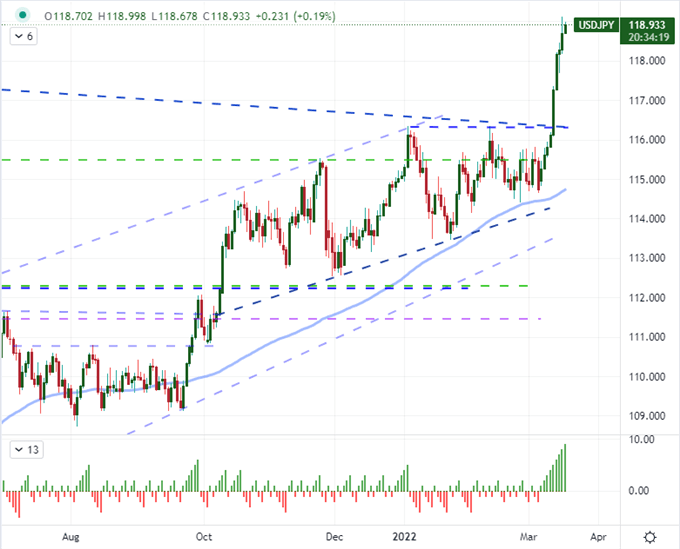