Though this past week started with some extreme volatility from the likes of the Nasdaq 100 and S&P 500, the sharp Monday drop didn’t translate into a persistent trend through the five-day stretch. Looking back on the period, I see consolidation that reflects well the market’s reticence to commit to trend while also long suffering a high-level volatility, resultant of indecision. While Russia’s invasion of Ukraine enters its third week with the subsequent fear of global war and the blowback of harsh sanctions, the most acute financial fallout via commodity prices seemed to plateau this past week. That offered a breather for battered speculative benchmarks, but it doesn’t absolve the underlying issues. Growth forecasts are sliding, inflation is rising, central banks will be forced to tighten and the outlook for financial markets is seriously uncertain. Traders and investors would do well to progress cautiously. To keep tabs on speculative appetite, the US equity indices remains my benchmark threshold. Last week’s price action was a consolidation pattern for the QQQ (Nasdaq 100 ETF) and Dow Jones Industrial Average. Yet, if you looked at a higher time frame chart such as the weekly – as larger money managers often do via papers and wrap reports – they will see that the former has officially closed the week in a technical ‘bear market’ (-20 percent from all-time highs) and the Dow slipped year-long support around 33,250. 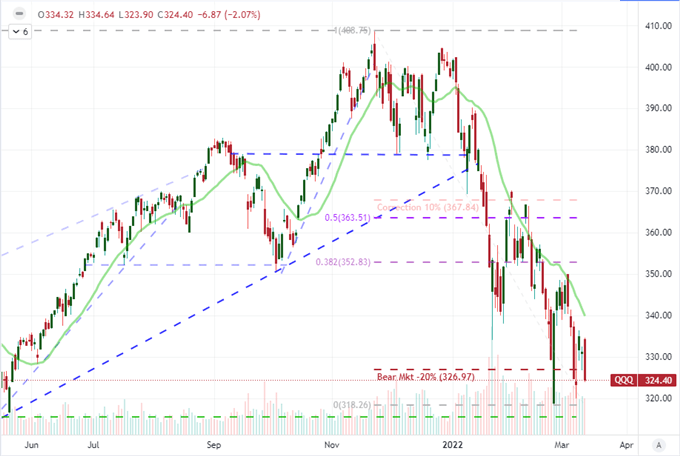 While I will be on the lookout for tactical opportunities through technical and fundamental means, market conditions will be a principal influence over my approach to the coming week’s landscape. There are a host of high profile events scheduled for the first 48 hours of trade in the week ahead, but it doesn’t rise to the qualification of being systemically important. That higher class of event risk starts to hit the wires on Wednesday – with the FOMC rate decision due in the New York afternoon session a symbolic turning point. That degree of anticipation can often have an anesthetizing effect on the markets, as few major investors are willing to take a significant exposure ahead of the such definitive event risk. Yet, the potential for a full-blown risk view to develop before the Fed issues its forecasts is certainly possible via the influence of the Ukraine-Russia war. That can come during the weekend (for which I’m monitoring Bitcoin) or in the days preceding the central bank run through mere headlines. If you’re looking for something more tangible around Russia, it is due to pay over $100 million in a foreign coupon payment on its sovereign debt Wednesday. There is a 30-day grace period on a missed payment, but the market likely registers that there is little benefit to paying sovereign debt holders amid severe sanctions. 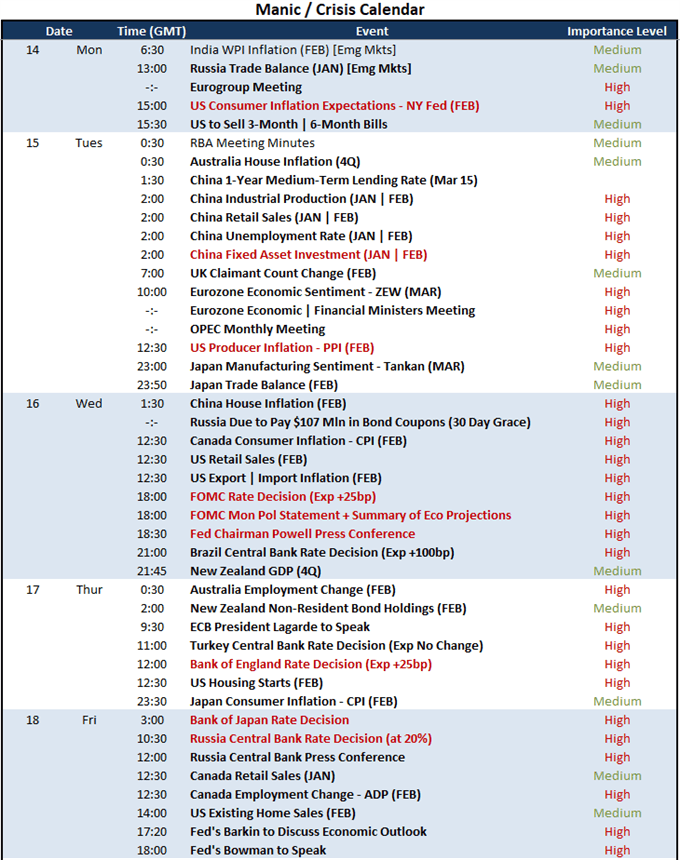 Where the Ukraine Crisis Is Having a Real Market Impact

The situation in the Ukraine is terrible with loss of life that is unconscionable and an escalated global geopolitical risk that could rise to the level of a possible nuclear war. Yet, the market’s don’t really consider the worst-case scenario a consideration in the portfolio analysis (money doesn’t matter in a nuclear winter). Instead, the rubber meets the road when it comes through commodity inflation that is in part a result of Ukraine’s being taken offline for production but also the subsequent impact from Western sanctions on Russia. I am monitoring crude oil just as close as anyone, but I’m also interest in softs and industrial metals. There are some interesting fundamental relations to draw here. GBPNZD represents just such a situation where we have witnessed an extraordinary three-week plunge that is largely the result of rapid commodity inflation. A snap back is probable, but that call is best left to fundamental and technical confirmation. 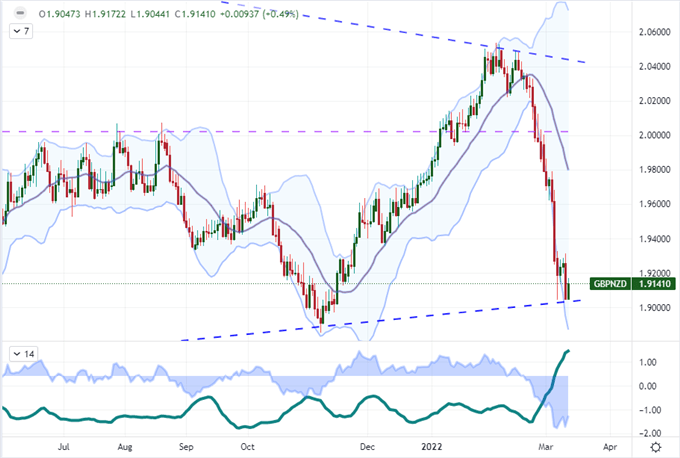 Another victim of the higher commodity prices is Japan. The country has to import the vast majority of the raw materials it consumes, which means the natural flow of risk aversion to encourage Japanese investors to repatriate their foreign carry holdings to local currency is heavily overridden. It has no doubt registered among frequent FX traders that USDJPY and the other Yen crosses have not slid under the very tangible risk aversion pressures in the open financial market. That is largely due to the fact that Japan has to import the vast majority of its commodities from trade partners, and the transactions are done principally in US Dollars. That has made for an exceptional development in USDJPY through the very end of the week. The pair has broken through a multi-year wedge formation and posted one of its biggest daily rallies in a year-and-a-half and biggest weekly charge in two years. I am very dubious of follow through as that would insinuate true risk appetite or an unrelenting commodity inflation – both of which are improbable. 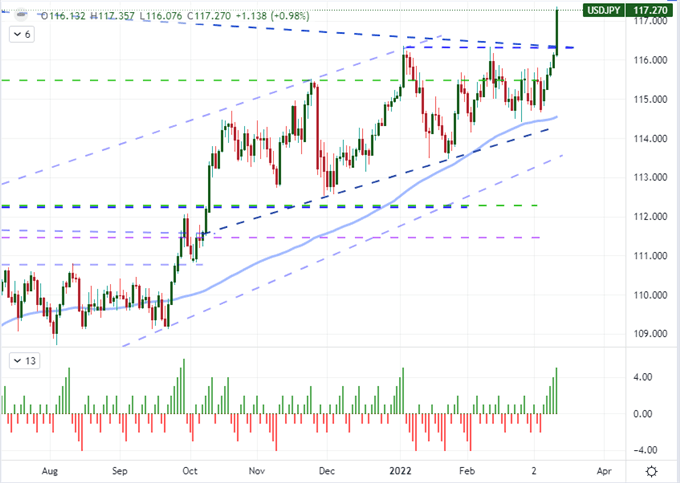 On the Scheduled Side of the Fundamental Ledger

Ukraine and commodity inflation are top concerns moving into the new trading week, but by the time we hit Wednesday, the absence of overriding headlines will put us at the mercy of scheduled event risk. It actually start in the morning when Russia is due to make a coupon payment on foreign holdings of its sovereign debt – a payment that the government is very likely to miss. We still have a grace period after that Rubicon is crossed, but there is no benefit for the government to make a payment to keep access to a market that is otherwise cutting it out of the system. The real fundamental impact comes on Wednesday at 18:00 GMT. The FOMC rate decision is expected to result in a 25 basis point rate hike, but the markets will be processing the official forecast, monetary policy statement and Fed Chairman press conference to see what kind of outlook the group is going to offer against more than six 25 basis points of rate hikes priced into swaps and Fed Fund futures. 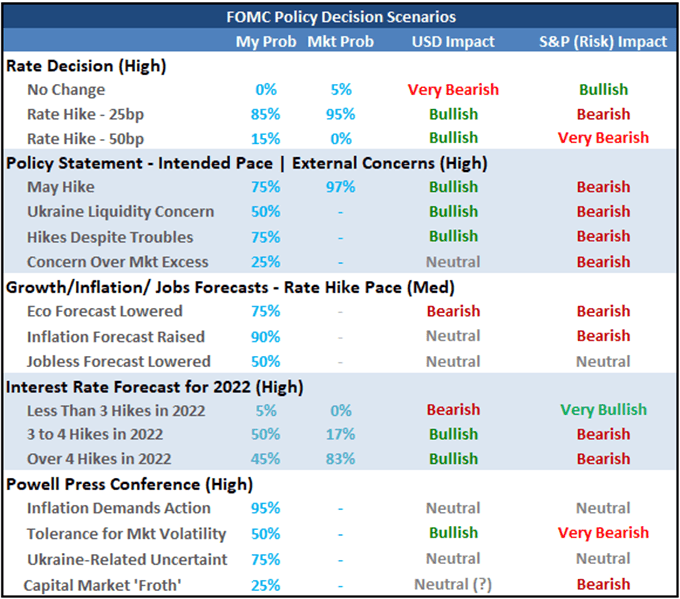 A run of US inflation data and the Fed’s actions will carry a lot of potential for the Dollar and its crosses. I am of course very interested to see if the Greenback’s rally will persist should the group ‘meet expectations’ with the USDJPY already well above its technical break and EURUSD back below 1.1000 to star the new week. That said, there is plenty more scheduled event risk due for release through the back half of the trading week. Other major central banks ready to update include the authorities in the UK, Brazil, Turkey, Japan and event Russia. The Bank of England (BOE) tops my list of most interest central bank – outside the Fed – as it is expected to hike 25bps. That isn’t so extraordinary when you consider the Brazilian group is due to increase 100 basis points and Russia has already made liquidity stabilizing adjustments. Don’t underestimate the influence of monetary policy as a theme even if the Ukraine situation continues to dominate the headlines and worries. 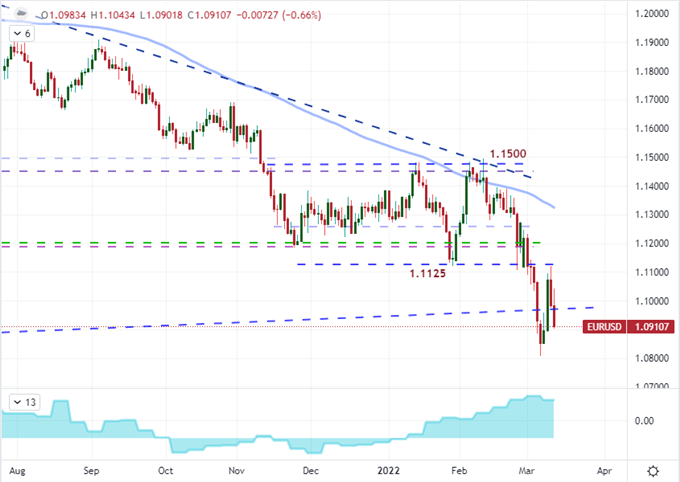