The West is Turning the Screws on Russia

The trading week opened to the fallout related to a severe escalation in sanctions against Russia by the West for the former’s ongoing invasion on Ukraine. With little sign that President Vladimir Putin is willing to de-escalate the military engagement, the collective of concerned Western economies announced a range of extraordinary measures to penalize the world’s 11th largest economy including restricting access by Russia’s central bank to access reserves and removing strategic Russian banks from the SWIFT payments system. These are extreme measures as they restrict the country’s ability to access the global financial system and limit its tools to stabilize local market distress. Though details have not been fully fleshed out by authorities, the SWIFT measure is designed to further limit Russia’s ability to raise capital outside of its borders. The more extreme move is preventing the central bank’s access. That can lead directly to a currency crisis, which would fit the extreme 25 percent rally in USDRUB. There were talks on Monday between Ukrainian and Russian delegates, but no word of definitive measures came of that summit. The next meeting is loosely expected Wednesday. So, in the meantime, global risk trends will likely remain at the mercy of unpredictable headlines out of Eastern Europe. 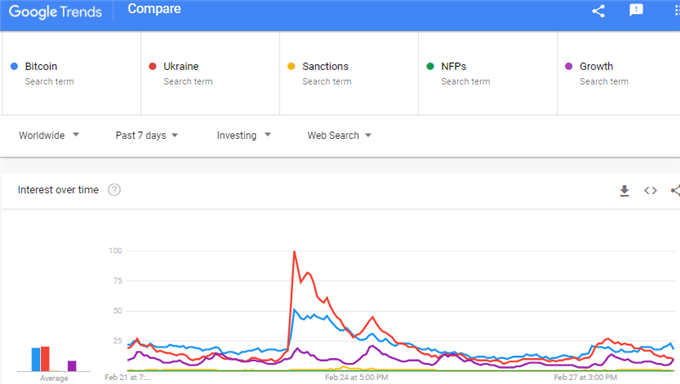 As the financial pressure escalates on Russia, it is remarkable to see how productively the West has been able to direct the influence of its sanctions thus far. I don’t think we will see that isolation hold out for long. Looking at the relative performance of ‘markets with a stake in the game’, it is clear that those measures that are directly Russia related have absorbed the biggest overall impact. Russia’s capital market benchmark were shuttered to start the week, but the Western proxies fully exhibited the fallout. The VanEck Russia ETF dropped a staggering 30 percent to start this new trading week on 50 million shares of turnover. Following in close pursuit, the Russian Ruble dropped -18 percent through this week’s opening session. Other emerging market measures that include Russia in the product mix took their own hit, but I’m more impressed with the quick rebalance for assets that are consider ‘risk sensitive’ or are otherwise ‘safe havens’. Crude oil jumped 4.5 percent Monday but that was approximately half of the gains registered intraday while gold was up only 1 percent following a 2 percent intraday rally. I see this as the market not fully pricing in the risk at hand. Complacency is a strong emotion for the markets. 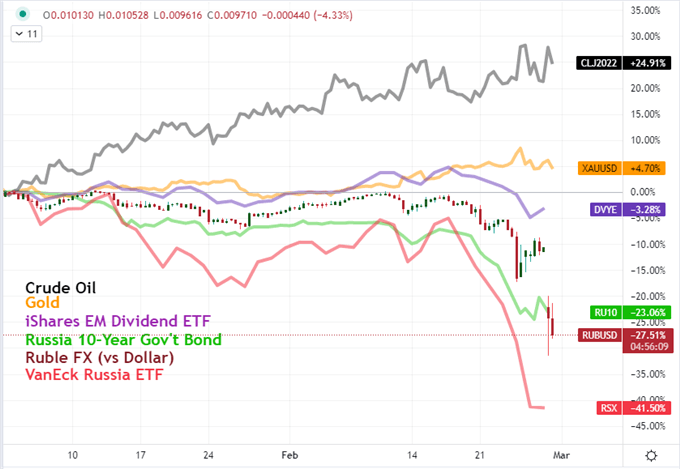 Speaking of risk trends, the most dichotomous performance through the start of the week has to be the US indices. These are preferred risk benchmarks but they are not particularly sensitive to every ebb and flow in speculative appetite. In fact, the US equity measure tends to default to ‘risk on’ unless there is an indisputable fundamental issue. Despite that skew, the Monday performance for the likes of the S&P 500 ETF (SPY) was still remarkable. Despite a sizable gap to the downside on the open, the market would ultimately close a meager -0.3 percent lower at the end of the day. From this performance, it is tempting to claim that what happens in Russia’s financial system is no matter for the rest of the world, but you cannot exert this level of restriction on an economy of this magnitude and not expect serious blowback. To assess the situation beyond an extraordinary complex immediate future, I like to consider what would happen in a ‘best case scenario’. In the event that Russia and Ukraine strike an armistice and rapidly de-escalate the situation, we would still feel the fallout of the actions over the past week and shift our attention back on the unfavorable course of slowing global growth and hawkish monetary policy. There is not much latent bullish charge there to tap into. 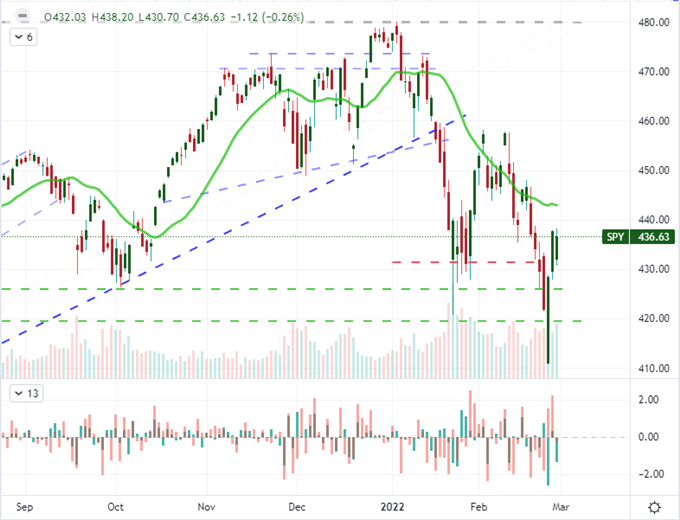 Another impressive move to start this week that I’d like to point out is the performance for the US Dollar. In response to the curbs on access for Russian authorities to the global capital markets and reserves, there is a sharp bid that would find the US Dollar and its benefactor (US Treasuries) alongside a necessary course correction as a result of the policy actions. Notably, the Greenback soared to start the week; but it would ultimately end in a much more respectable position in day-over-day terms. For EURUSD, the opening gap in favor of the Dollar pushed the second biggest bearish gap (second only to the June 29, 2015) on record. We are still firmly within the 1.1500 to 1.1100 range, but this remains a pair that should be watched for guidance on FX balance as well as a perspective on risk trends.

Chart of EURUSD with 100-Day SMA and Daily Gaps (Daily) 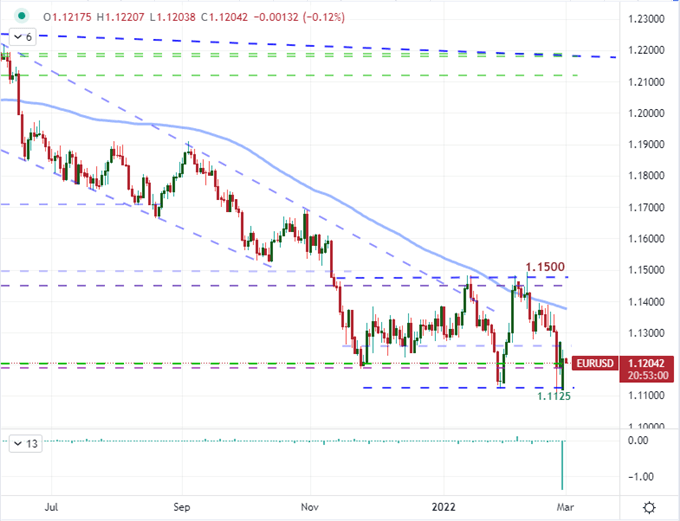 It’s easy to simply label the Dollar a safe haven and move on to the fundamental interpretation that would entail. However, I think there is more fundamental nuance at work with the benchmark currency. A side effect of the geopolitical uncertainties is a curb in financial stability that disrupts the Federal Reserve’s ability to execute a straight-line policy effort to cub inflation. Given the situation in Ukraine, I believe that price pressures will only intensify moving forward as the export of energy products from Russian will face restriction. That can be a benefit in some ways to the US Dollar as a safe haven, but it also a weight on interest rate expectations. While the implications for energy prices may be ‘hawkish’, the outlook for risk trends significantly softens. And, history has shown us that the Fed and other major central banks are very sensitive to swoons in capital markets. Notably, we were pricing in more than 150 basis points worth of hike (6 full 25bp moves) just last week; but as of Monday, we are at 129 basis points. 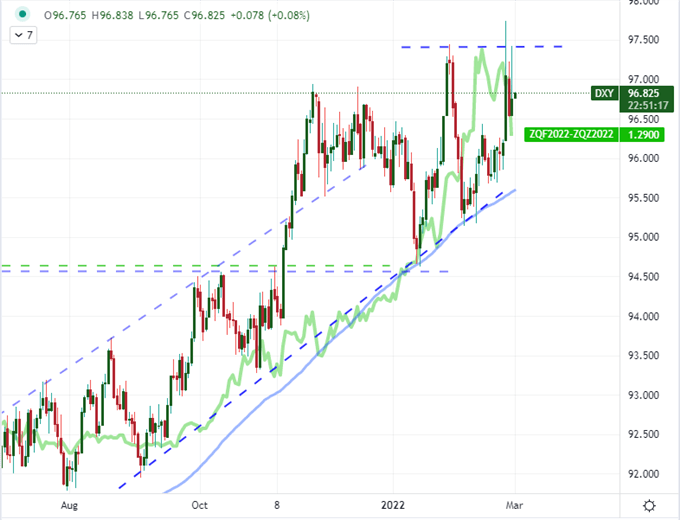 Interest rates matter, whether it is the genesis of fundamental speculation or the secondary concern from external developments. That is where some of the schedule event risk on tap really registers on my radar. An explicit monetary policy event, the Reserve Bank of Australia (RBA) rate decision is the first major central bank to weigh into policy this week – the BOC is actually expected to hike 25bps. That said, we are due other data point that will speak to monetary policy without having the head of a central bank offer their opinion. In particular, I’m watching German CPI, Canadian GDP, US manufacturing activity (ISM) and Fed speak to my list of ‘to watch’. Beyond that, we have the benefit of meme stock earnings (AMC) after hours as well as a State of the Union by US President Joe Biden which will touch upon the exact top concern of the broader market. 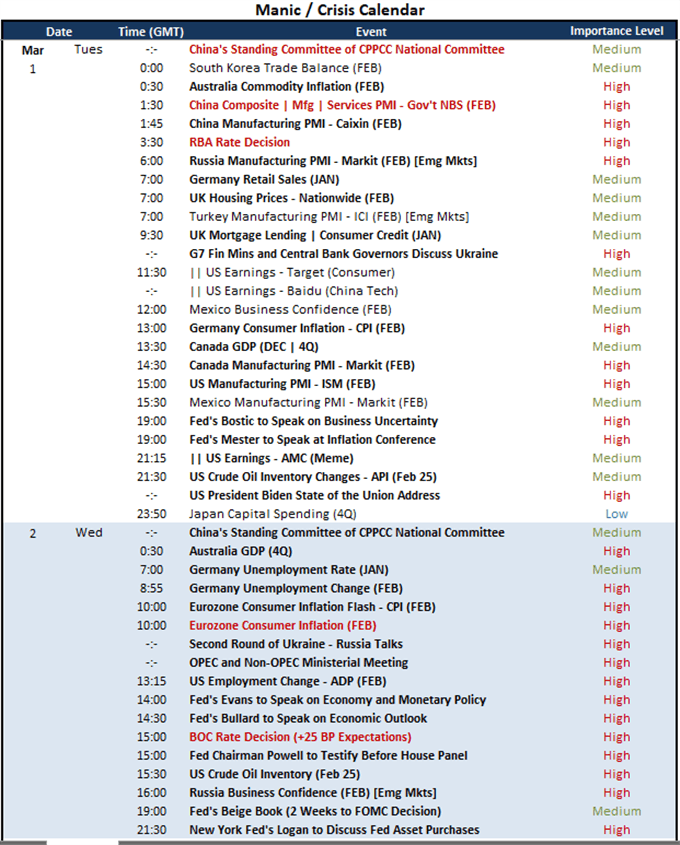