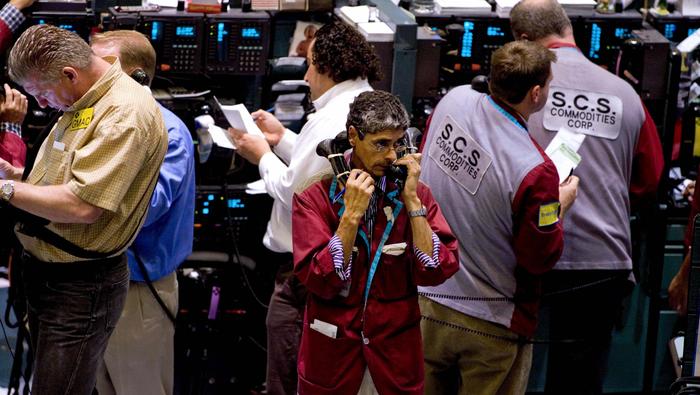 Is Risk Appetite Really that Relentless?

We closed out this past week on a remarkably – almost unbelievably – bullish footing. Through extraordinary volatility and a ‘near hit’ for the Nasdaq 100 nearly closing in ‘bear’ territory, the final 48 hours of trade produced a strong risk reversal with the biggest daily Dow rally since November 2020 and the second largest gold upper wick (denoting intraday reversal) on record. What is remarkable is that this recovery came amid an unmistakably severe geopolitical threat in the ever-escalating Russian offensive against Ukraine. The unprompted war has certainly not been resolved; but even if it were to de-escalate to a tangible conclusion, would it truly offer a favorable backdrop for bullish market interests? To untangle this complicated scenario, it is first important to assess a hierarchy of importance to the global economy and financial system. Google worldwide financial search interest is a good – if imperfect – proxy for market attention; and ‘Ukraine’ has outpaced any concern in the more systemic matters like ‘growth’, ‘volatility’, ‘inflation’ or ‘interest rates’. It stands to reason that this orders market-moving potential. 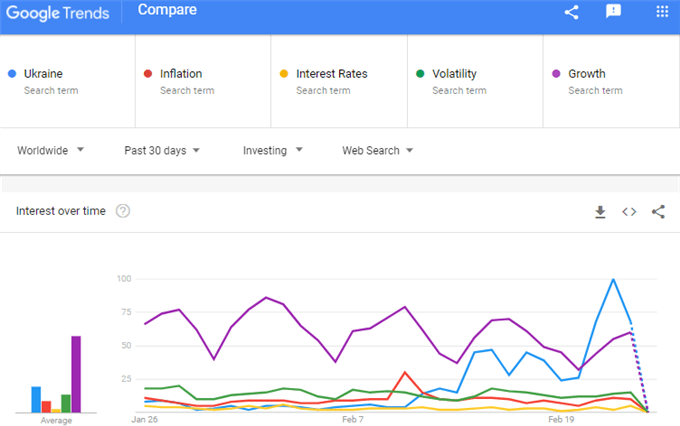 So, what is the range of scenarios that we are look at with regard to attack on Ukraine? Given the Russian President Vladimir Putin’s push towards Kyiv, the Ukrainian capital, it seems this isn’t a push to force Western powers to negotiation NATO’s expansion and other points of contention for Russia. It seems the United States and other major powers are adamant about staying out of the war to avoid a dangerous escalation that can quickly get out of hand (escalate to threats of nuclear weapons). Economic sanctions are the more practical vehicle of pressure, and the impact is severe for Russia and the rest of the world. A further rise in energy prices is the principal blow back and it is a serious one given the state of inflation and the throttled pace of growth lately.

There are opportunities for dip buying through lulls in the headlines, but it would be a truly astounding brushing aside of fundamental risk to presume this is the foundation for a reliable bull market. A possible throttling of monetary policy normalization is about the limit of the favorable forecasting to draw. Even in a best case scenario where all military actions halt, Russia returns to its own borders and the West drops its sanctions; we merely return to the fundamental difficulty that had started the retreat in earnest earlier in 2022. While speculative interests – merely collective psychology – can defy logic, it seems much more likely that we are experiencing an opportunistic ‘bear market bounce’. 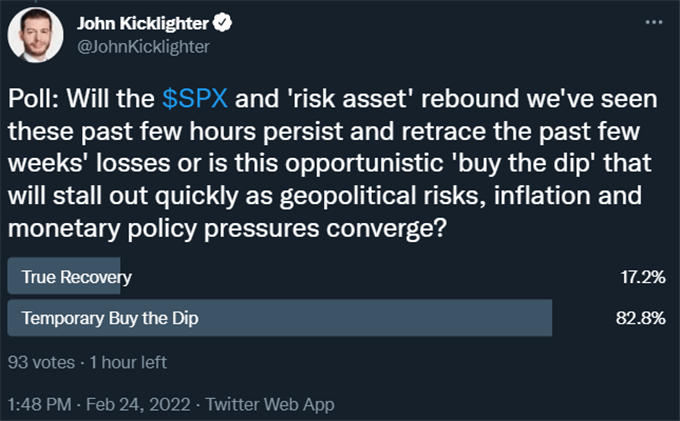 Volatility Is the Real Feature for Which We Should be Impressed

There is a lot of debate to be had over the bearish course overall in 2022 and the remarkable reversal through back half of this past week, but I think most remarkable trait of the market is the persistent scale of volatility. This isn’t a volatility drawn from implied measures like the VIX index as this measure moved more into trading and away from hedging some time ago. Instead, I like to follow the realized volatility established in price. Rather than being impressed by the more than 3 percent gap down on the open this past Thursday and then a subsequent close of more than 3 percent up over the previous day’s cap by the Nasdaq 100, I consider the extreme pace and unpredictability a ready amplifier for future trouble. It’s certainly possible that the markets seek further ‘relief’ rally into next week, but how reliable would that move register whether we operation on traditional valuation or more simplistic logic? 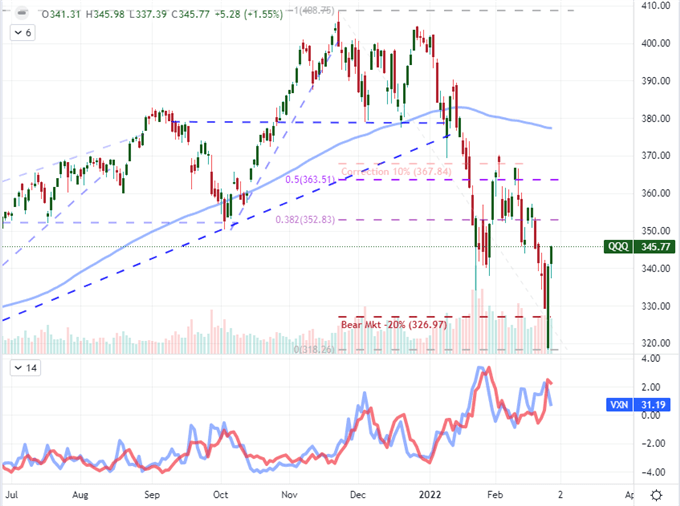 Thus far, we have discussed mainly the volatility threat that comes with the unpredictable Ukrainian situation; but such a reactive backdrop can also create serious threats through more prosaic event risks. There is a lot of scheduled event risk ahead, and the character of the updates can be distorted by environment. Monetary policy will remain a forefront consideration as a possible outlet for relief for speculators should expectations cool. There are two major central bank rate decisions on tap (Reserve Bank of Australia and Bank of Canada) but there is also a range of critical inflation data and central bank speak that should be monitored. Growth potential will become more important as the artificial suppression from sanctions downgrades forecasts. That will be important for events like Chinese February PMIs, Canadian and Australian 4Q GDP and US NFPs. Unusual events like China’s Standing Committee gathering and US President Joe Biden’s State of the Union gain a sudden macro clout. Even typically lower profile events like weekly oil inventories could prove major market movers. 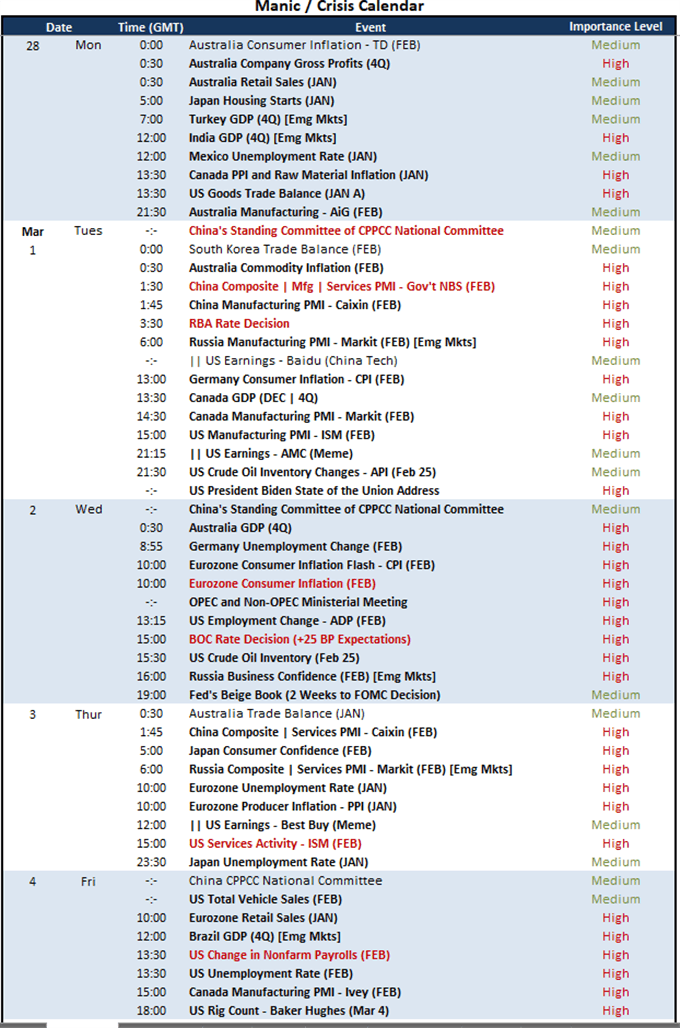 For markets that link directly to the volatile geopolitical backdrop, there is great risk and great potential that needs to be evaluated against each investor’s assessment of conviction and tolerance for risk. Assets like crude oil where sanctions can be directed, gold and Treasuries where safety features are particularly strong, and US indices that cater to risk appetite should be treated with the utmost caution. If you are looking for fundamental insight as much as speculative potential, pairs like EURUSD and USDJPY are highly tuned and liquid with some curb on the extremes. Setting aside the unpredictable fallout should the West move forward with cutting Russia off from SWIFT payment system – which can cause serious FX volatility – these pairs reflect general risk qualities, monetary policy disparities and some proximity to the geopolitical flashpoint. For EURUSD, a bid for the Dollar as a ‘haven of last resort’ over the second most liquid currency would be very telling. Rate forecasts will be impacted by the mix we have, and these two are on opposite ends of the spectrum. Another element not to write off is the proximity of Europe to the war both in terms of the dependency on Russian energy products and its actual geographical position. 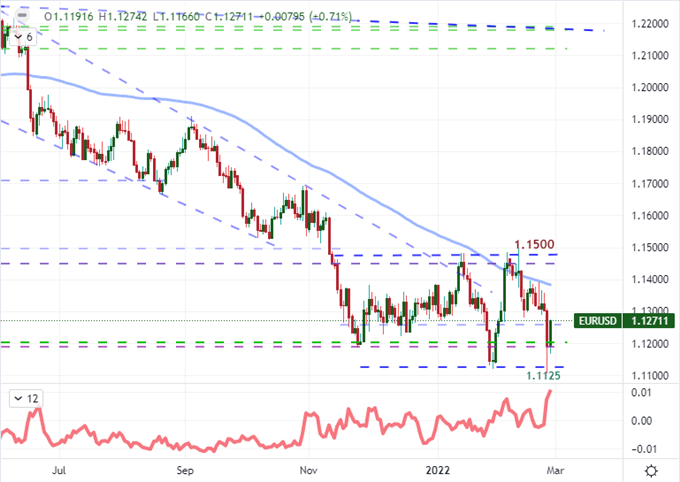 If you are trying to neutralize the uncertainty around the Russia-Ukraine war, it can be difficult to find assets that don’t have some meaningful connection. Again, I look to the FX markets for a cross with some distance but with its own set of high profile event risk. AUDCAD certainly has exposure to commodity prices as a conduit for risk trends, but they happen to be on the same side and similar intensity levels as major exporters of energy products. They also have a history of drawing carry interest, but that can make for a more nuanced relative policy stance. Given that we have RBA and BOC rate decisions on tap – not to mention 4Q GDP figures and other noteworthy updates – we have a more orderly fundamental path to follow. 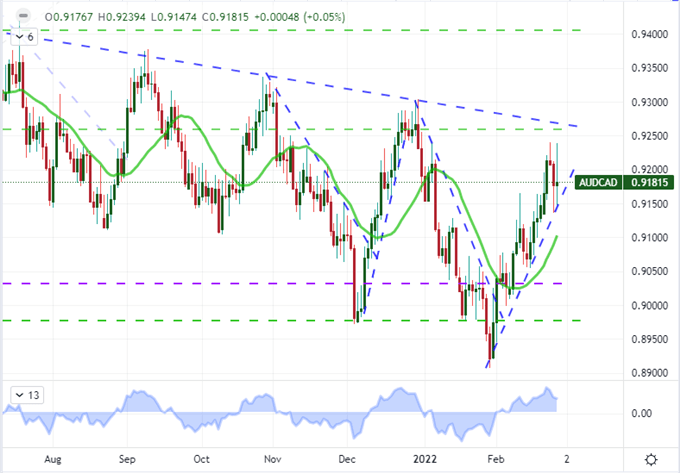