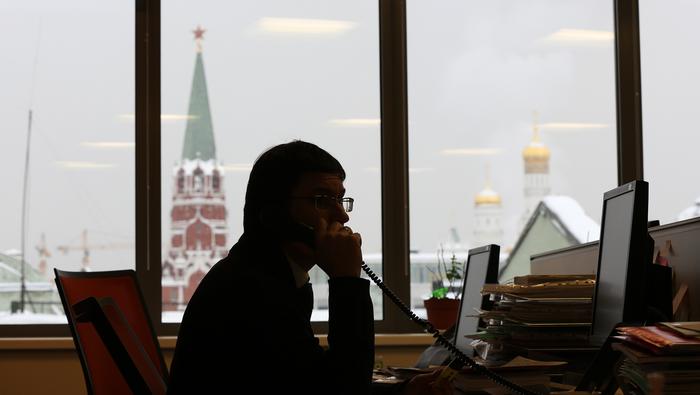 A Bear Market for the One-Time Leader of Risk Appetite

Russian forces are moving into Eastern Ukraine, and the geopolitical risks are registering on the global threat radar. Through Wednesday’s trading session, warnings of an imminent invasion into ‘uncontested’ territory of Ukraine by Russia military was reiterated by the White House and other Western leadership. Through early Thursday Asia trade, the warnings seemed to come fruition as reports of attacks around Kyiv began to roll in. The risk this present the global economy and financial system is abstract and enormous, so there is little surprise that it is met with genuine fear from capital market benchmarks stretched over the past years on the back of extreme stimulus. Moving into Thursday trade, any and all measures of risk appetite should be monitored; but my principal focus will be on the one-time leader of the bulls: the Nasdaq 100. Most traders access this index via the QQQ ETF, but both index and derivative are on the cusp of entering a ‘technical bear market’ which is defined as a -20 percent reversal from all-time highs. We are likely to see that box ticked in active Thursday trade. 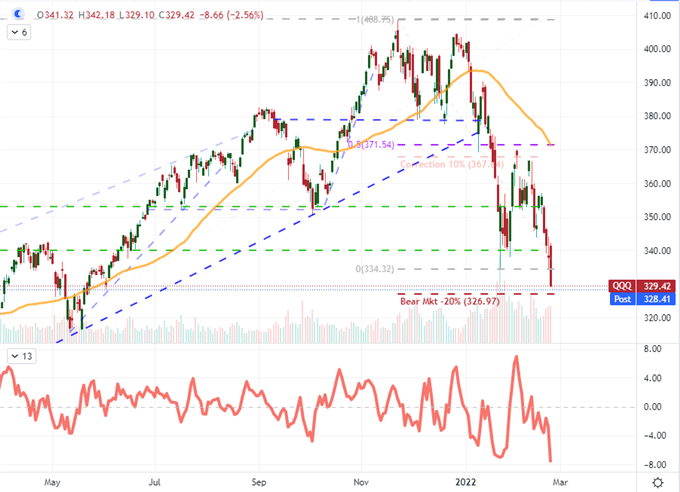 Throughout this week, we have seen the market’s attention on ‘Ukraine’ remain firmly at the forefront of systemic concern. This was a matter to outstrip monetary policy related concerns (‘inflation’ and ‘interest rates’), attention paid to outright ‘volatility’ and ‘growth’ itself. This skewed focus will only intensify over the final 48 hours of trade this week as Russian forces are reported to have landed in Mariupol and Odessa with attacks on Ukraine’s capital, Kyiv. The sanctions that the West was already in the middle of upgrading this past session are likely to intensify, but that is clearly not going to stand as a genuine deterrent to Russian President Putin. The question is how far this threat will be extrapolated by international investors. Will the West go to war with Russia and rouse the Cold War fears of a ‘nuclear winter’? While a low probability, the impact of such an event is so severe that its probability-potential consideration is so profound that global macro watchers cannot afford to ignore the implications. For now, we should monitor the tone of the crowd; but benefit of time and analysis will push attention to growth and monetary policy implications. 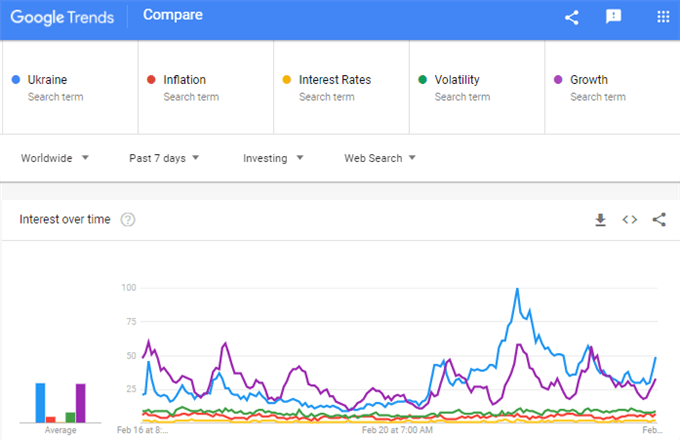 While ‘risk trends’ is a principal focus for myself and other market participants moving forward into the fundamental unknown with Russia invading a sovereign country, there are other traditional measures that should be monitored for sheer impact. Perhaps one of the most tuned barometers to the situation is energy prices. US crude oil (WTI) was in an indecisive position before the reports of Russian forces moving into uncontested Ukrainian territory. After that run of headlines, the Western benchmark for energy prices surged to seven-and-a-half year highs. There is an interesting contrast to consider between European and US benchmarks for crude as well. Proximity and impact of sanctions impact Europe’s economy more acutely in this situation, and we can see the impact in the relative performance of the UK benchmark crude (brent) contract versus the prime US measure (WTI). The premium to the former has charged to nearly 5 dollars per barrel and pushed brent above $100 per barrel for the first time since 2014. 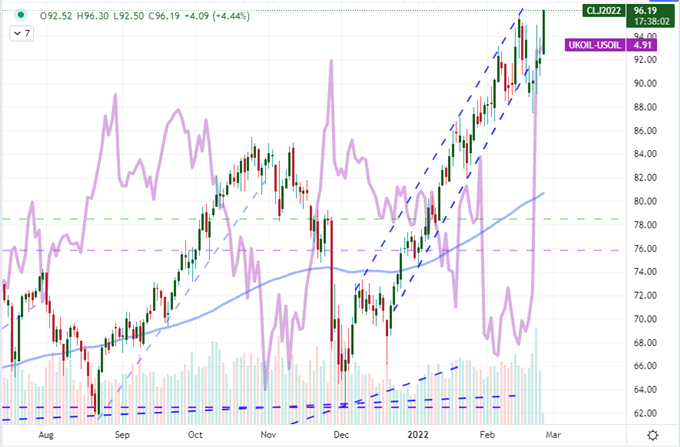 On a very different fundamental line, we have the consideration of monetary policy. This was the top fundamental driver through the previous few months, a charge that was bolstered by an unfettered outlook for risk trends which could reinforce the importance of fighting inflation. Up through Wednesday’s trading session, we were seeing the outlook for Fed policy intentions holding exceptionally high. Despite the uncertainty ahead, the markets were fully pricing in six standard rate hikes (+150 basis points) through the end of this year and still assessing a 30 percent probability of an aggressive 50bp rate hike come March 16th. That confidence has ebbed to less than 10 percent as of early Thursday trade, but this is still a remarkably hawkish view of what’s ahead. Should risk aversion intensify, I suspect the hawkish rate outlook will cool and offer some measure of offset to speculative retreat. 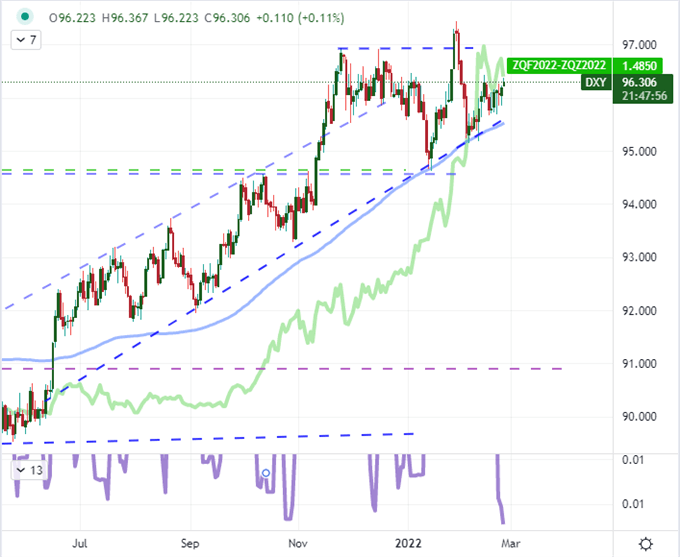 Ukraine and Everything Else

Given the state of affairs, our first focus should be on the situation unfolding in Ukraine – not to mention the impact this event has on other macro matters. However, there are other issues that should be on our radar whether we view them as their own market-based catalyst or a fundamental refractory. Accounting for the headlines for a moment, interest rate expectations is a point of serious contention for traders. The relentless hawkish view of the past few months now faces fears of a financial and economic fallout which could dramatically reduce the 100 to 150 basis points worth of hikes being priced in by the major policy players. In particular, I will be watching hawk Loretta Mester’s remarks later today. Meanwhile, earnings will offer this week’s top run of data amid a broad downward guidance shift for the season. Before open, we have Chinee commerce giant Alibaba, pandemic victim Norwegian Cruse Lines and pandemic benefactor Moderna. After the close, the focus shifts to speculative milestones in Coinbase, Block (formerly square) and meme favorite Beyond Meat. 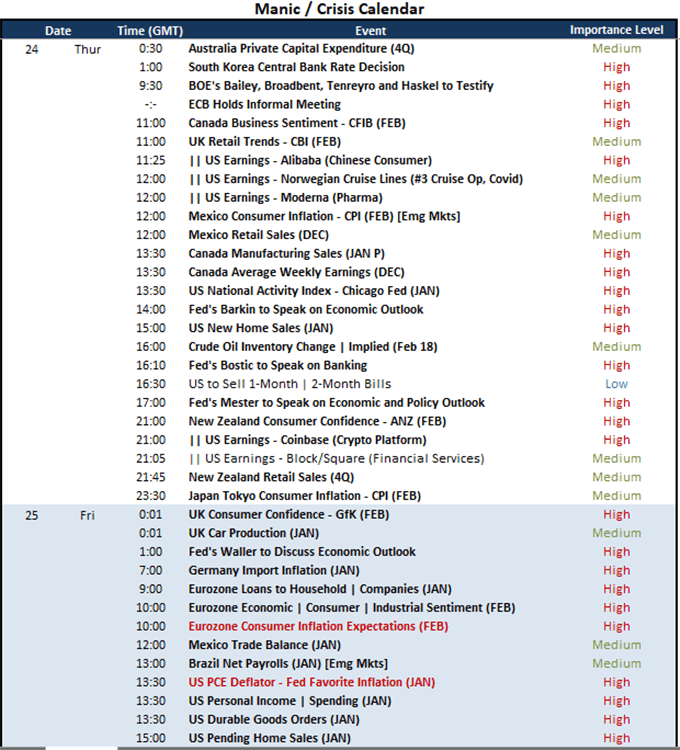