A Continued Distraction for a High-Capacity Risk Event

The markets closed out the week with a serious sense of unease around the state of affairs in Eastern Europe. The concern that Russia will cross into Ukraine and produce a serious flashpoint for global geopolitical instability remains a top concern for investors. That can be seen in scale of search interest among the leading fundamental themes at present (see below) whereby ‘Ukraine’ continues to outstrip speculative interest in ‘inflation’ or ‘interest rates’ (monetary policy matters) and even ‘volatility’ itself. It should come as no surprise that this is a top tier catalyst as there are few other major events on tap ahead with the same level of scale. Yet, one of the most disruptive features of this threat is the lack of a definitive timeline. US President Joe Biden repeated Friday that he believes his Russian counterpart had made up his mind and would invade ‘in the coming days’, but that is an echo of almost exact language from a week ago. When a major events occurrence (whether it happens or not) cannot be set to a reasonable time frame, it is even more difficult for market participants to hedge out or reduce their risk. So, while there are matters of monetary policy speculation and growth updates among other top level considerations ahead, my focus will start with the headlines and whether Russia and Ukraine remain on their respective sides their shared border. 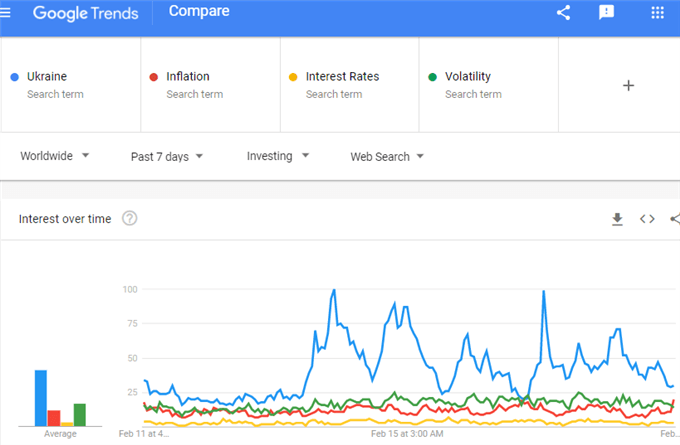 As we look ahead to a new trading week with a serious fundamental cloud overhead, there are many assets that face significant volatility and directional variability depending on what world leaders decide. However, my first consideration for markets starts with a simple assessment of liquidity and chronology. If a military action happens over the weekend, most major capital markets will be closed. There will be a little FX liquidity, but not truly accessible in the scale to offload risk. There is one popular asset type, however, that is famous for its weekend trade: cryptocurrency. While some would consider this newer asset class an alternative to fiat and thereby a safe haven, the practicality now is that there is a disproportionate interest from typical investors who would respond by attempting to offset risk on their broader portfolio by either unwinding or taking a short to hedge the market’s positive correlation to equities lately. While there are a number of more speculative coins out there, my focus is on the most popular and structurally-integrated: Bitcoin. The 39,500-figure is first level support heading into the weekend, but 32,500 looks more like the ‘point of no return’. 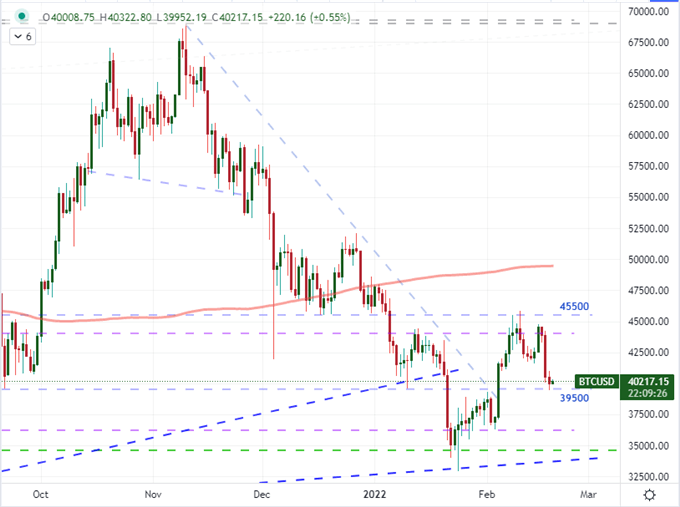 As we get back into typical open hours for global exchanges, my attention will shift back onto traditional assets. One of the top measures of risk on my list remains the US indices as it is bullish biased with a holdout against the erosion of confidence seen to different degrees over the past year. I am particularly partial to the S&P 500 (SPDR ETF) and the Nasdaq 100 (QQQ ETF) given their representation in US and global investor portfolios. For the SPY, we ended Friday just above the ‘technical correction’ mark of a 10 percent correction from all-time highs. That said, the real tipping point would be a drop through 425 where we have a range low stretching back 8 months. A caveat to this measure: Monday is a market holiday for the United States, so an exchange traded asset like the SPY ETF will not be able to adjust until markets opened back up the following session. In such an event, the S&P 500 e-mini future or other highly-tuned risk asset is a better candidate. 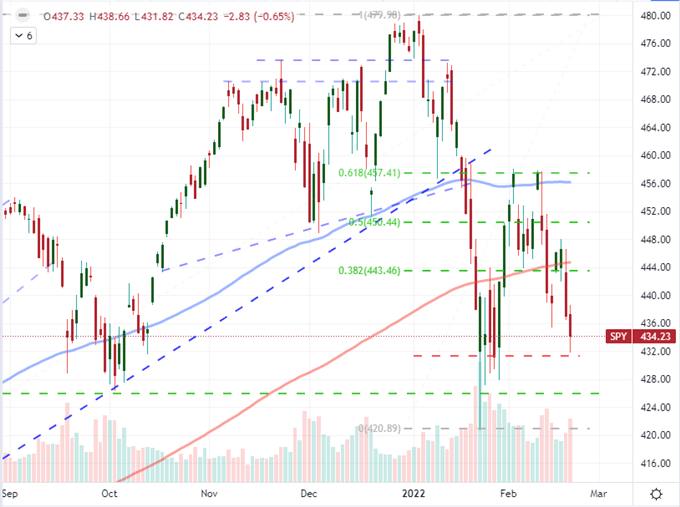 Less of a trade vehicle in itself, I will also be watching the US 10-year Treasury yield very closely over the coming week. This is a benchmark that certainly follows interest rate expectations for the Fed – one of the leading policy groups – but it isn’t as sensitive to the daily ebbs and flows from the likes of Fed Fund futures or the 2-year yield. What’s more, the 10-year is the market standard of the ‘risk free’ benchmark. It is one of the most frequently used assets for cash equivalency because it is considered to be an ultimate safe haven. We don’t want that haven when markets are healthy and rates are seen rising, because the government bond will underperform. Yet, when fear prevails, there are few alternatives when concern turns to panic. I’ll be watching the 20-day moving average around 1.90, but you can also find popular alternatives like the TLT Treasury ETF which tracks price rather than the yield (so it moves inversely to this yield). 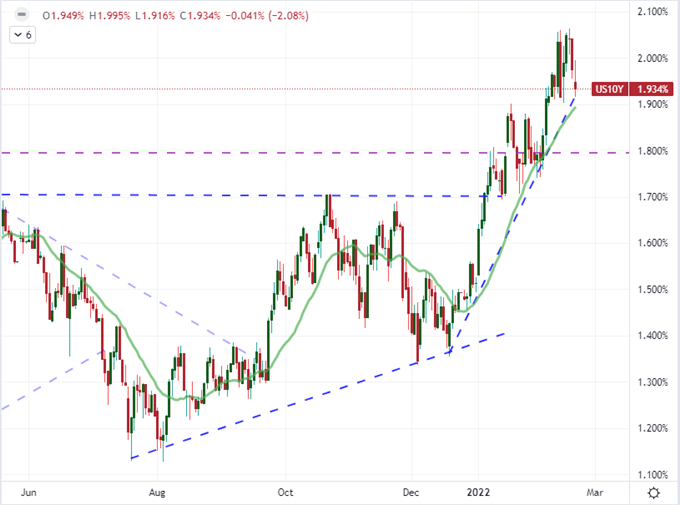 Finally, an market to watch with both interesting fundamental signally power but with its own tradable merits is EURJPY. In the event of risk aversion, all of the Yen crosses are likely to tumble as nascent carry trade positions are unwound. Where the EURJPY has any carry interest on the outlier hope that the ECB will start to respond to inflation pressures, that will collapse first. However, there is another aspect to this situation which makes this pair (and other Euro crosses) particularly interesting. In the event that Russia does invade the Ukraine, the US and its allies are likely to respond with harsh economic sanctions. One of the means for exacting the heaviest economic toll on Russia would be a ban on the country’s energy exports (principally natural gas). This would be painful for Europe whose energy needs are heavily supplied by Russia. Germany’s and Italy’s leaders are just a few that have warned that sanctions should not hurt Europe more than they hurt Russia. Pairing a risk aversion view with a Euro swoon can also pose an interesting picture on EURUSD and EURCHF. 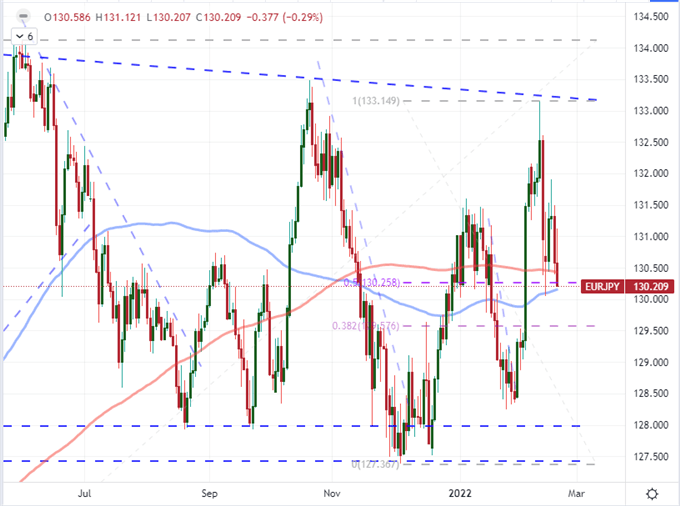 And Then There is Everything Else

If the breaking headline that Russia has crossed the border never shows up, the markets will still be watching with frayed nerves – unless diplomacy fully de-escalates the situation. That will work against the market moving capacity of alternative fundamental event risk that happens to be on tap this week. There are quite a few calendar milestones that I will be absorbing through the coming week that generally categorize as rate forecast or growth forecast. On the former, we have central bank speak throughout, sentiment surveys that touch upon inflation and of course Friday’s US PCE deflator (Fed’s favorite inflation indicator) and the Eurozone’s consumer inflation expectations report. On the growth side, the February PMIs hit the wires Monday – and the US on Tuesday when markets reopen. Earnings will also offer insight into economic health and inflation with the likes of Home Depot – sprinkled with some speculator favorites from the past year like Coinbase. 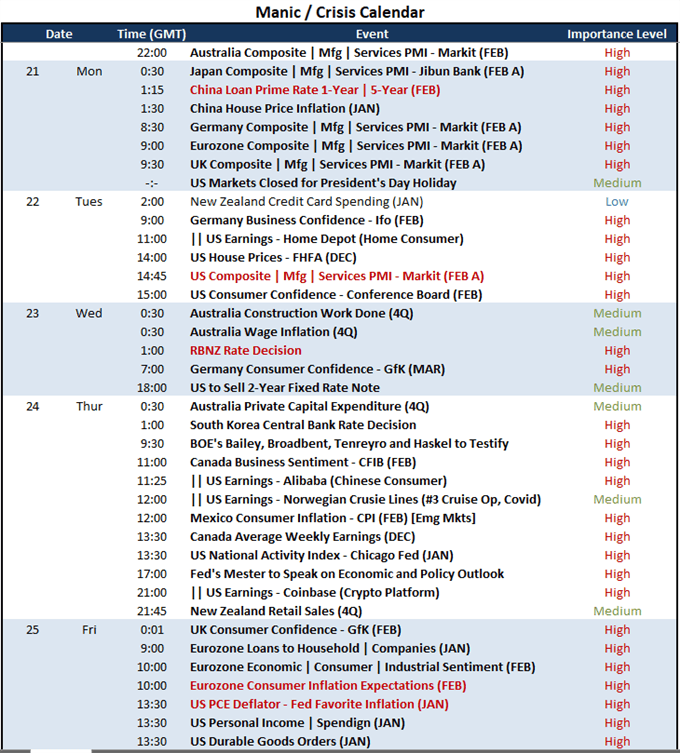