A Warning Said In Irony and Market Volatility

We have opened a new trading week with an unintended check to ensure what the fundamental hierarchy is for market participants. While monetary policy trends remain a top theme for financial markets, the extreme threat and uncertain course should Russia invade the Ukraine makes the possibility of the event a looming threat pulling investors’ attention away from matters with more tangible traction. Through Monday’s session, both Fed speculation and fears over the Ukrainian boarder proved active matters of concern. Vocal hawk – and FOMC voter this year – James Bullard was on the wires once again warning the central bank needed to act. That doesn’t sit well with speculative trends founded on the leverage built on extremely low funding costs that result from accommodative monetary policy. Attention shifted but the trend didn’t change when reports once again warned that an invasion of Ukrainian territory was potentially imminent. At the peak of the day’s slide, the SPDR S&P 500 ETF – one of the most heavily traded representatives of ‘the market’ – was down -1.2 percent with this combination of drivers. However, that slump found its relief when perhaps the most urgent warning around Ukraine was walked back. 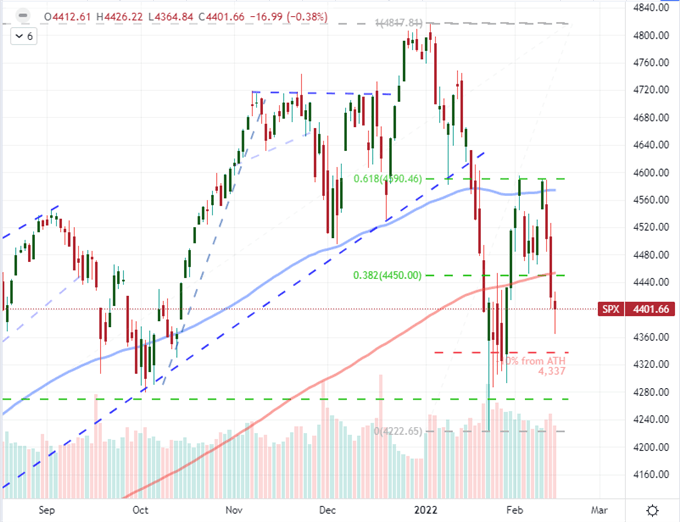 Global investors – particularly those with a long-risk bias – probably didn’t appreciate Ukrainian President Volodymyr Zelenskyy’s global statement Monday that he believed Russia intended to invade his country on February 16th (Wednesday). Considering the White House had indicated Russian forced had moved into ‘attack formation’ shortly before this headline, the interpretation was easy to understand. Markets believed the worst case scenario was imminent. Just as the market was building a head of steam in its slide, the President’s spokesman clarified was only repeating reports from the media, perhaps ironically. Such remarks however can have an outsized influence on market activity when global search interest for ‘Ukraine’ in investing channels outstrips searches for inflation, volatility and interest rates. Naturally, if this situation flares up – for real this time – expect the markets to respond once again. The real question is whether the market will discount the event quickly expecting NATO not to respond with force to the effort to annex just as with Crimea back in 2014. 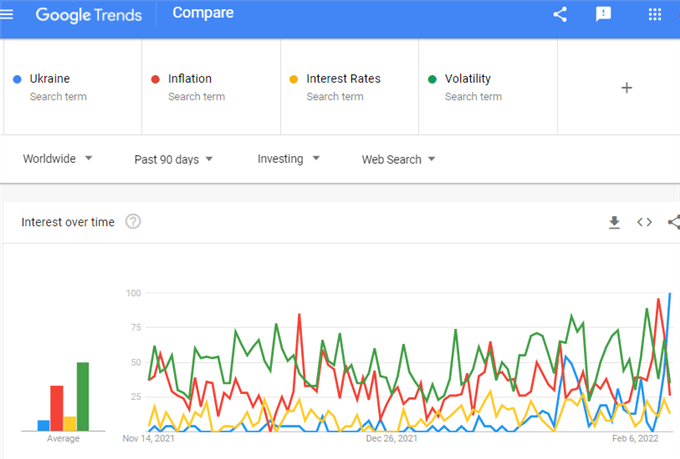 With the volatility witnessed Monday, it is worth asking the question: what markets are better positioned for the different fundamental fallouts. The Greenback is one of the more interesting candidates to consider amid competing themes. In the event of a geopolitical risk that hits crisis levels, the world’s most liquid currency can cater to its ultimate safe haven status. There was perhaps a little of this appeal on display this past session from the DXY Dollar Index. Of course, motivation for that response is perhaps difficult to distinguish from relative monetary policy. It is worth nothing that interest rate expectations derived from Fed Fund futures are still pricing in approximately 160 basis points worth of tightening through the year’s end. Helping that hawkish view was St Louis Fed President James Bullard whose remarks this past Thursday outstripped the official CPI report. He didn’t pull any punches this go around and said the Fed’s credibility was in jeopardy and a need for front loaded tightening essential. That said, the NY Fed’s consumer survey for the current month reported the first lowering of one-year and three-year inflation forecasts since October 2020 while typical hawk Esther George (Kansas City Fed President) said she supports a faster move to asset sales (QT) but said a 50bp March hike was not clear. Bullard is not the median view. 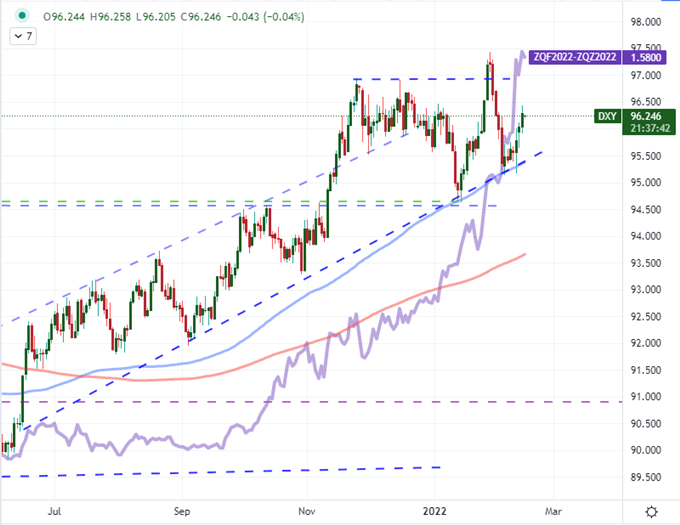 With the Dollar may find itself at the crossroads of multiple fundamental streams, it may a good volatility candidate but it is a poor fundamental play given the conflict. Interest rate forecasts for the Fed is the most persistent influence for the market and therefore remains my principal consideration for the currency. Two-year Treasury yields and Fed Funds futures are similarly skewed towards reflecting on interest rate forecasts rather than sentiment. If you want a measure that is well positioned as a barometer for risk ‘in contrast to rates’, the US 10-year Treasury yield is an important measure to track. While influenced by the outlook for market rates into the future, this duration (10-year) is disconnected to short-term interest rate moves which typically fall within the two-year window. That means one of the top global financial assets is better suited as a risk barometer. I’ll be watching the bearing and activity level of the Treasury yield as a more concerted rudder to the otherwise chaotic VIX. 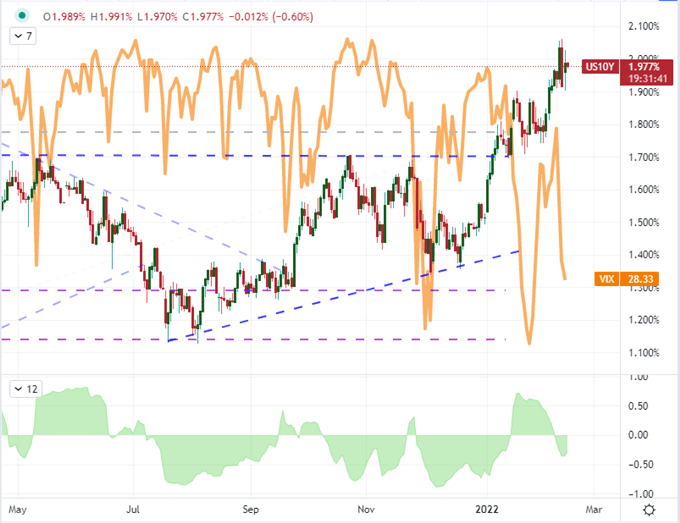 Other Markets and Other Data to Watch

The convergence and contrast between monetary policy and Ukraine-focused risk has other financial measures that should be contemplated as much for their reflection of the financial system as their individual trade appeal. Gold is one such market where the ‘anti-fiat’ has refused to breakdown from a multi-year congestion despite a broad rise in interest rate forecasts over the past two to three months – in part owing to extreme inflation leading to negative real rates. Yet, with the Ukraine fears charging Friday to Monday, the commodity reverted to its safe haven role in dramatic fashion with its break above 1,850. Another tangible asset worth watching is crude oil which extended its surge to above 95 per barrel this past session as anticipated supply disruptions associated to a West-Russia standoff spread. This commodity is up over 50 percent from just the start of December. 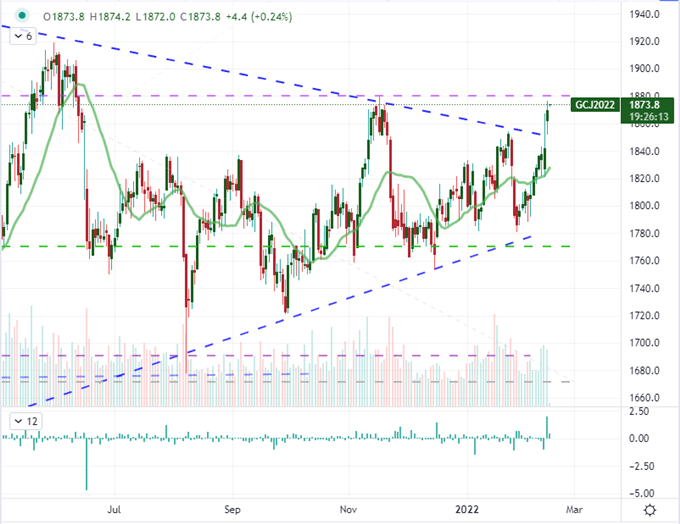 Moving forward, my focus remains on monetary policy as a driving theme ready to switch to the overriding risk implications associated to serious escalations related to Ukraine. There is no scheduled event risk in Russia’s planning, but monetary policy has milestones to track ahead. From the US, the upstream inflation figures registered in the PPI can cater to a highly sensitive market on Fed intentions. The Senate Banking Committee’s vote on the FOMC top positions could prove market influential as would member remarks, but that is a lower probability. In Asia, the RBA meeting minutes are on my radar considering the Aussie central banks is still believed to be lagging its Western counterparts (and RBNZ) while average earnings reported out of the UK can give an inflation picture from the labor report – exacerbated by the BOE Governor’s poorly considered remarks after the recent rate hike. I’ll also watch the European economic sentiment survey data and Canadian housing start data. 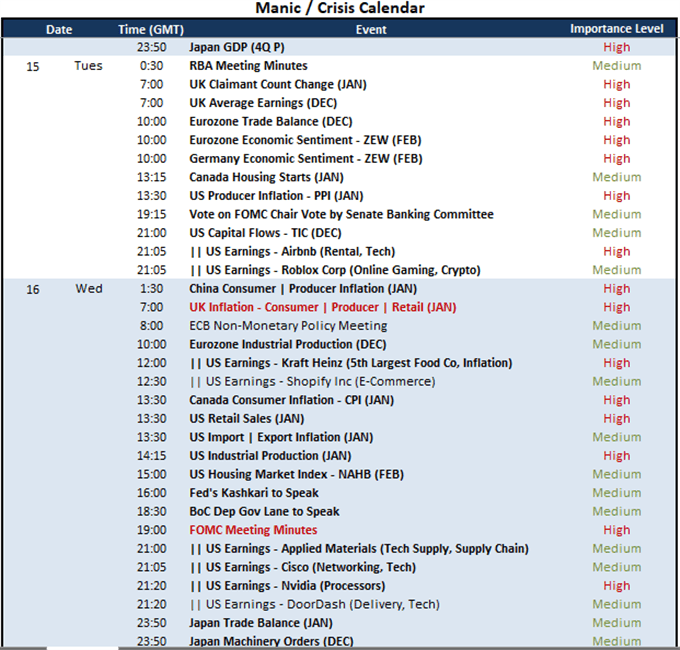