What are the Options for the Fed, SPY ETF and EURUSD?

We have been monitoring the focus around anticipation for the US inflation report released this past session through the entire week – and it wouldn’t disappoint. For the most part, the markets held to a remarkably restrained range this week in the lead up to the price gauge offering stark contrast to the previous two months of extreme volatility. Of course, there was that Wednesday’s gap higher that wouldn’t progress any further beyond the opening charge; so the mentality held. While there is still an argument to be made that perhaps we are just seeing cooling of the extreme activity levels, I believe that it was distinct observation of poignant event risk that was lurking on the economic docket. That seems to have been borne out this past session by the sharp intraday volatility that we experienced from risk-leaning assets this past session. Following the highest readings of consumer inflation since 1982, the SPDR S&P 500 ETF lead us through an extreme day with a large (-1.4 percent) gap to the downside followed by an early rally back to resistance around 457.75 and then subsequent tumble through the day to close out a -1.8 percent overall drop. Ultimately, we are still within the broader range of the past week-and-a-half, but technical traders would do well to keep tabs on the 200-day moving average. 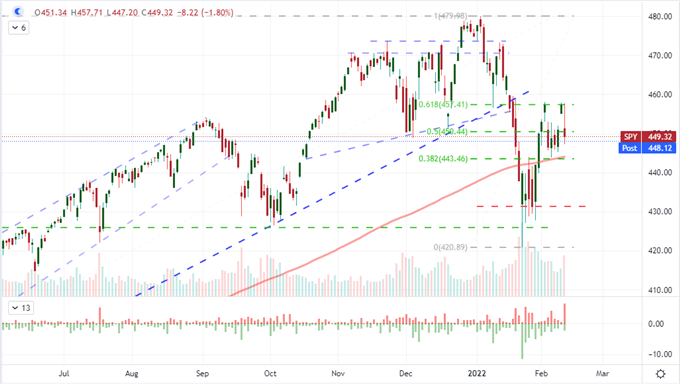 If we had to associate the shift in market view and volatility this past session to a particular event, it wouldn’t be difficult to trace back to the US consumer price index (CPI). It was fairly clear that the markets were anticipating the report with the narrow trading range that we had carved out over the first half of the trading week, but confirmation of the data’s importance was registered by the sharp price movement immediately following the report. The headline inflation reading accelerated to a staggering 7.5 percent clip and the core measure charged to 6 percent. That is the fastest pace since 1982 and notably faster than the consensus forecasts. If there were ever an argument to be made for a faster and more aggressive tightening regime from the Federal Reserve moving forward, this would be the foundation for that view.

Chart of Year-over-Year US Headline and Core CPI (Monthly) 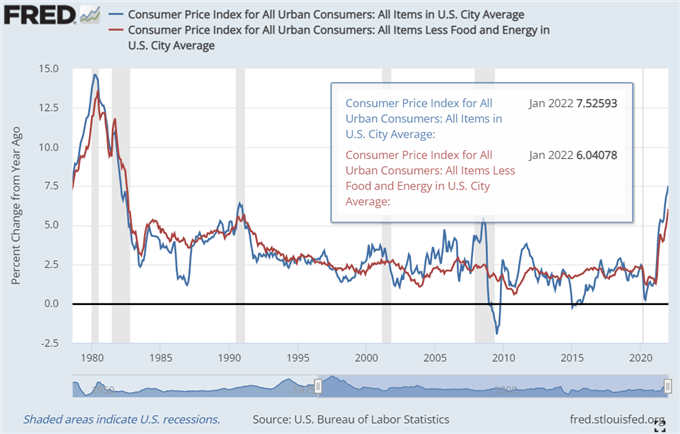 The Real Driver of Volatility and Risk Trends

US inflation data certainly bolsters expectations of a more aggressive Federal Reserve tempo, but the data alone probably wouldn’t have generated the kind of market impact on its own that we had seen this past session. The differentiator was commentary made by perpetual Federal Reserve rabble rouser James Bullard. The St Louis Fed President made remarks shortly after the data to make clear that he would champion the most hawkish interpretation of what lies ahead. Among his remarks, the highlights for traders was his support for a 50 basis point hike at the next (March 16th) decision and 100 basis points of total hikes by the of June. If you look at shorter time frame charts, it is fairly clear that the market was willing to retrace after the official inflation statistics – even after the beat – up until Bullard’s comments hit the wires.

Chart of US 2-Year Treasury Yields 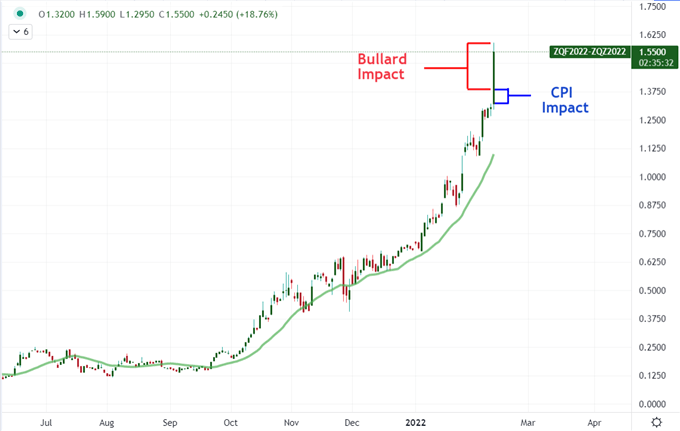 Whether the Fed’s most hawkish member single handedly raised the upper boundary of monetary policy expectations or not, the rate forecasts are charged. Both Fed Fund futures and swaps are fully pricing in six, standard (25bp) rate hikes through the end of the year – which is close to one per each meeting of 2022. There are a few ways that the central bank can handle this situation. Holding to December’s official median of three hikes in the year seems a serious outlier. Instead, the lower threshold as I see it is four hikes with the first coming at the next meeting (March 16th). If the central bank is looking to make an impression and ‘pull the speculative oxygen from the room’, they could hike 50 basis points; but I don’t see it as the certainty priced in by the market. A singular 25bp move with a warning that all meetings are live thereafter can keep to forward guidance without the group losing credibility. They can also consider a faster cap on the QE program than the end-of-March timeline that they had given at the end of last year something of a concession. If they really wanted to make an impression, the Fed could hike before the official next meeting – though I would consider that pursuit of an option far too late when a surprise hike during less extreme times could have drained the mystique of policy out of the market. 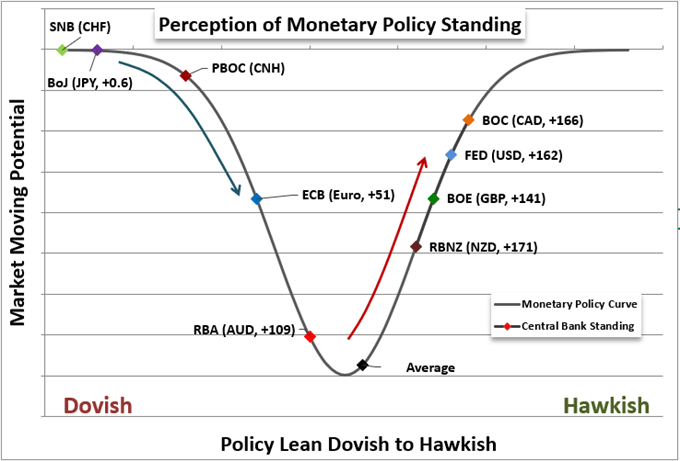 The Dollar’s Take on Rate Expectations

When it comes to ‘risk assets’, the Fed’s intentions are working against a threshold. I believe there is little dispute with the observation that more than a decade of extreme accommodation has pushed speculative appetite to extremes – out of necessity as much as negligence. Therefore, a reversal of course risks raising the costs of risk-takers and leading them to significant losses if they maintain exposure. Alternatively, the Dollar has been more of an active relative-value player. The strong inflation and Fed commentary combination of the past session has pushed 2022 rate expectations for the Fed to 162 basis points, which rivals the Bank of Canada and the Reserve Bank of New Zealand. You may see that and wonder: if the Dollar’s outlook is so hawkish, why is EURUSD still tacking between 1.1500 and 1.1400. My answer to that question is: speculation. There has been an exceptionally hawkish outlook for the Fed relative to the ECB for a few months now, and the events of the past session do not materially change that equation. Perhaps the University of Michigan (UofM) sentiment survey can move the needle through consumption or even inflation expectations, but I am not holding out for a clear week-end range break for trading purposes. 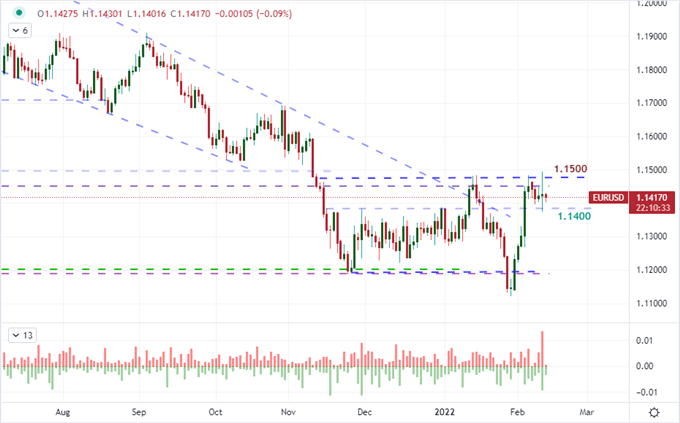 Since we are contemplating a systemically shifting, global monetary policy regime across the globe with a view of risk trends, it seems appropriate that USDJPY is consulted. The pair is both a prime carry candidate as well as a risk metric. This past session’s rally clears out a head-and-shoulders pattern (and confounds my Q1 opportunity assessment) but it still abides the larger technical picture. Moving up to a monthly chart, you can appreciate what 116.00/50 represents for this cross. I don’t this a mere boundary on a chart. It is a reflection of severe limitations of carry trade both in terms of what is practical for rate forecasting as well as what the backdrop for risk appetite in the various outlets of the financial system. 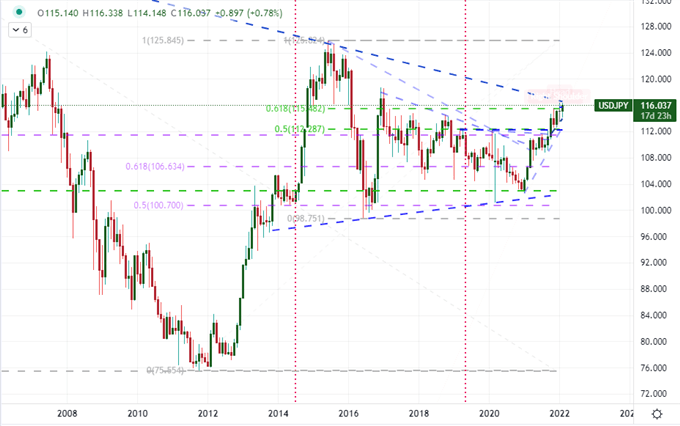