A Gap Higher That Only Raises a Reversal Profile

Risk assets shifted higher this past session, but the advance carried little of the sentiment that registers as genuine intent among the bulls that have been sidelined thus far in 2022. A lack of conviction is not difficult to imagine given the persistent, high level of volatility these past few months and the general trend so far in this new year. Reticence is also to be expected when heading into an important and potentially wide-reaching event risk. The US consumer price index (CPI) is the market’s favorite inflation indicator for the United States – the world’s largest market. And, given that the Fed has prepped us for rate hikes in the immediate future with heavy speculation as to the pace that we are facing, this data matters a lot. With that context, this past session’s SPDR S&P 500 ETF rally looks suspect. The gap higher on the open Wednesday morning was impressive and on-brand for ‘risk’, but there was very little follow through during active trade. That makes it look very similar to the ‘island reversal pattern’ from February 2nd. This situation could play either way: an accelerated bullish rally or double top reversal. But that view should at least consult the outcome of the Thursday morning’s inflation data. Given the direct connection of the US inflation data to the bearings of the S&P 500 and other major American equity indices, it is worthwhile to get a sense of global sentiment leading into this event risk. I do think that while the CPI is a US economic measure, its implications are global. That is owing to the spread of the hawkish mentality across the developed (and developing) world. With a symbolic reach, the upcoming data release’s impact should be considered against a range of ‘risk’ assets. Below, I compare the performance for just this week (on a 30 minute periodicity) for the S&P 500 emini futures, German DAX40 equity index, Japanese Nikkei 225 equity index, AUDJPY (carry trade), Mexican Peso (emerging markets) and junk bonds HYG ETF (junk bonds). The tempo may differ, but the advance is fairly universal. That said, however the US equity markets interpret the forthcoming inflation data; I suspect that the sentiment will spread more broadly. In trader parlance, that is to say that there is a strong influence through ‘risk trends’. In practical terms, volatility is likely to be contagious.

Chart of Relative Risk Asset Performance for the Week (30 Minute) 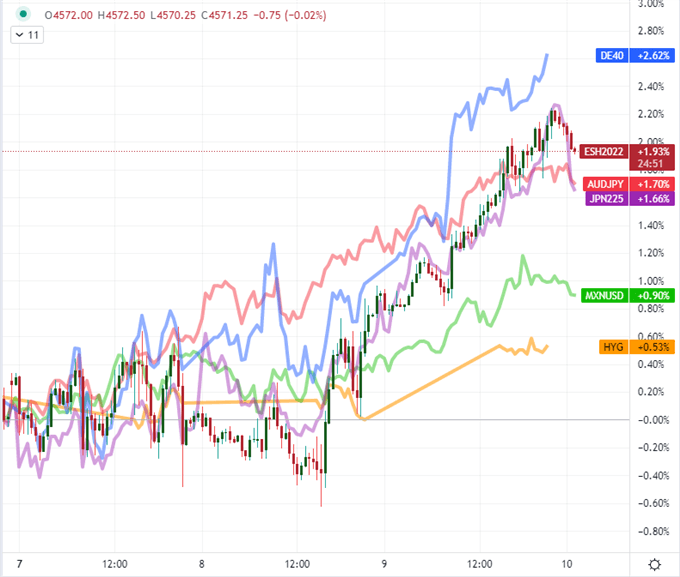 The Dollar Remains the Epicenter of the CPI Blast Radius

While I will be consulting general risk trends for their response to the upcoming US inflation data, the impact for the Dollar is likely to be the most distinct – even if it leaves us with a clouded outlook. Interest rate expectations have soared across the spectrum (for developed and emerging economies) over the past few months, which naturally generates a serious amount of interest. For the market’s Fed outlook, a debate between five and six 25 basis point increases in 2022 makes for an extreme discussion. Yet, that hawkishness has been priced in to some extent – but how much of it is reflected in the Greenback? We will find out. For me, there is no better place to judge the outcome of the data against the expectations of the markets than EURUSD where we have stalled out from last week’s sharp rally (driven by the ECB’s modestly hawkish relent) and now bounce between overt technical boundaries in 1.1500 and 1.1400. This pair could offer options for either a hawkish or a dovish outcome – bullish or bearish. That is a unique trait among the majors. 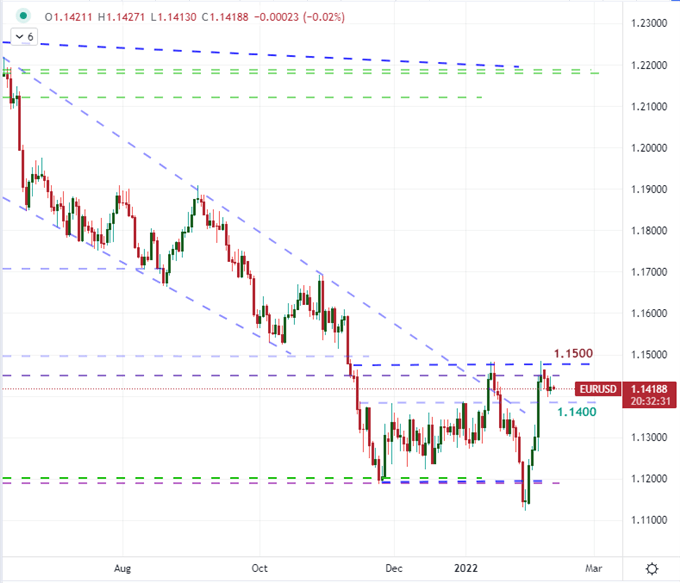 Another Dollar cross that I’m watching for the CPI data is USDJPY. While there are different profiles for the many different ‘majors’, this remains a favorite of mine for its medium-term perspective. In general, I think market-based US rate forecasts are seriously stretched. A hike regime that runs six or more standard increases in a normal year is very likely to trigger risk aversion which would cause problems for a seriously stretched capital market – a situation which has pushed the Fed to become defensive in recent history (ever since the Bernanke regime). So if we are running a skewed potential in risk trends and rate forecasts, that makes for an amplified situation for USDJPY which has major technical overhead after a volatile, but overall bullish, development. While the US CPI is top listing for a core central bank (the Federal Open Market Committee), it isn’t the only group that should be monitored for a sense of intent. On the economic docket Thursday, we have scheduled speeches from the Governors for the Bank of England (BOE) and Bank of Canada (BOC) – two groups that offer up healthy competition to the Fed for hawkish tempo. Given that we were left with a distinct lack of explicit intent from both groups following their recent, respective policy updates; we can certainly expect the market to be tuning in closely. I will also keep a wary eye open for the Reserve Bank of Australia’s (RBA) speech should it touch upon monetary policy early Friday morning while the European Commission’s Winter Economic Forecast is due any day – and that is where the rate speculation has proven the most intense, even if they aren’t close on the hawkish depth charts. 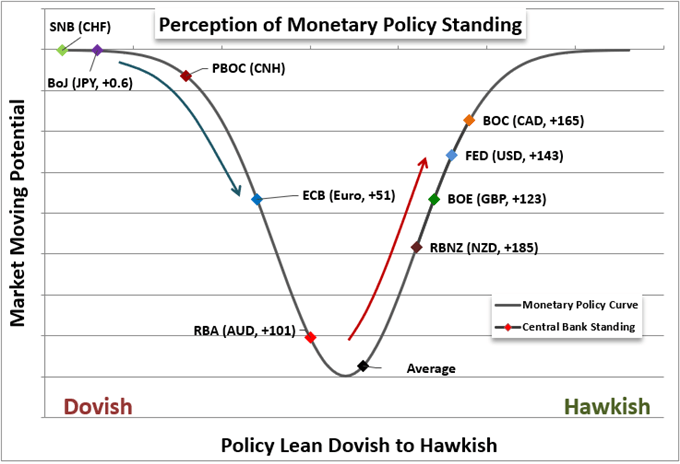 A wild card to consider for Thursday – but still very much in the monetary policy vein – is the Central Bank of Mexico’s rate decision. The group is due to announce its policy update at 19:00 GMT and the consensus is for a 50 basis point rate hike. That is not particularly out of step with major emerging market policy authorities (Turkey being a big exception), but it is remarkable relative to the ‘majors’. The question I have is what kind of movement do we get from USDMXN consider that the market is pricing in a 50bp hike ahead of time and the US CPI is going to clarify a much more diversified array of possible outcomes being debated among investors and traders. Ultimately, I think the CPI will have a greater impact on the pair, but it is worth not writing off any scenarios. 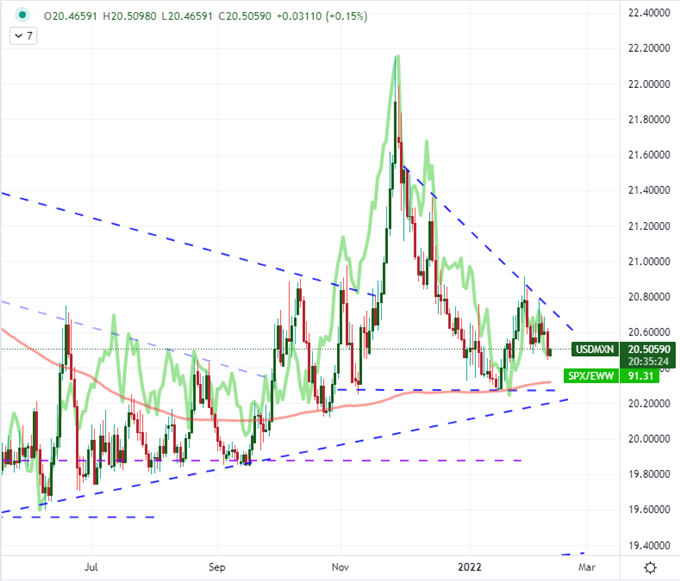