Start from Risk Trends and Then Interpret the Catalysts

Friday’s US session open is going to be staged for some serious volatility. We are already riding on some serious market activity from the past few weeks, but the event risk we have had to digest recently and anticipation for the upcoming session’s top listing – January NFPs – will keep traders and investors off kilter. Taking stock of ‘risk trends’ heading into the final trading day of the week, we have a brisk but very recent bearish wind to our backs. There was a convergence of hawkish monetary policy (in Europe), a throttling of US service sector activity and of course the Facebook earnings to consider for speculative perspective. Under that mix, it was not a surprise to see the QQQ Nasdaq 100 ETF suffer its worst single-day tumble since September 2020 (-4.1 percent). Yet, as sharp as the move was, this doesn’t suggest that a we have chosen direction for a trend. Even if we find follow through in Friday’s session, it would be premature to call conviction. 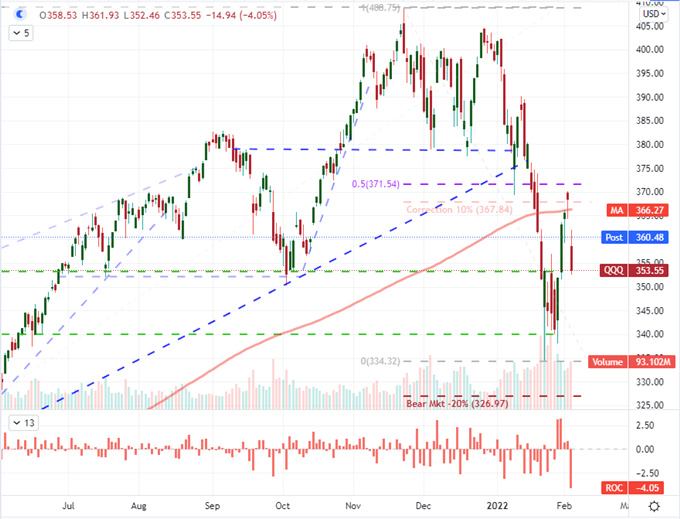 Sentiment matters. Consider the fundamental shove we witnessed over the past 48 hours. From the tech-heavy US equity index, there was an opportunity to response to a particularly strong earnings update in Google’s blow out figures afterhours Tuesday evening; but the breadth and intensity of the response beyond GOOG shares was tepid at best. A lack of sway from a FAANG member with an approximate $1.96 trillion market cap would suggest that perhaps the markets just aren’t paying attention to earnings when it comes to determining trend. Yet, the response to Facebook seems to dispel that notion. Even though the social media platform company is sporting a market cap of a mere $676 billion, it’s sharp disappointment in Q4 reported after the close Wednesday seemed to inspire serious risk aversion. While the QQQs wouldn’t drop nearly as sharply as the -26 percent tumble from FB shares, it was nevertheless a more significant charge. Perhaps these are markets predisposed to the negative? 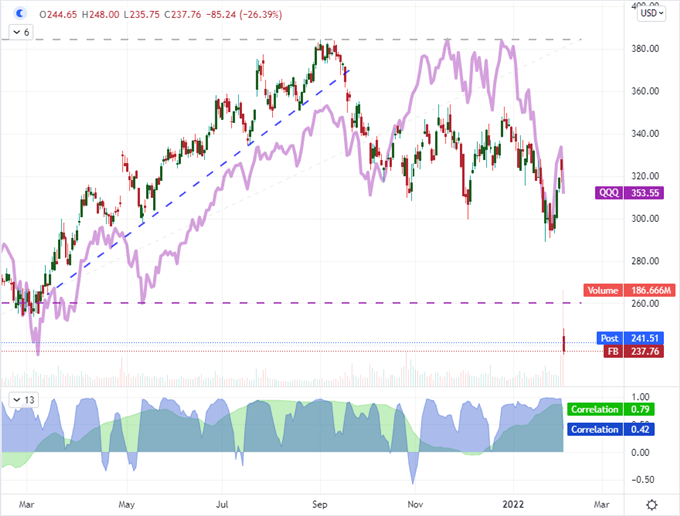 We are going to put the bullish/bearish bias concept to the test through Friday. While there are other fundamental matters at play into the close of the week, we have yet another strong earnings influence to contemplate. Fintech consumer spending giant and core FAAANG member Amazon reported its earnings to great fanfare after the close Thursday. Helped by the sale of EV manufacturer Rivian, AMZN reported EPS of $27.75 versus expectations of $3.88. So, while revenues were more staid in nature, the market seized on the big beat figure with a sharp 17 percent rally in the stock afterhours. The QQQs would seemingly enjoy the lift with a 1.2 percent advance of its own. Now its time to see how significant the optimism is after this showing. A hold for the US indices alone would be encouraging, but an outright rally would significantly change the dynamics for next week. That said, if the markets slide despite the corporate news, beware the implications for momentum. 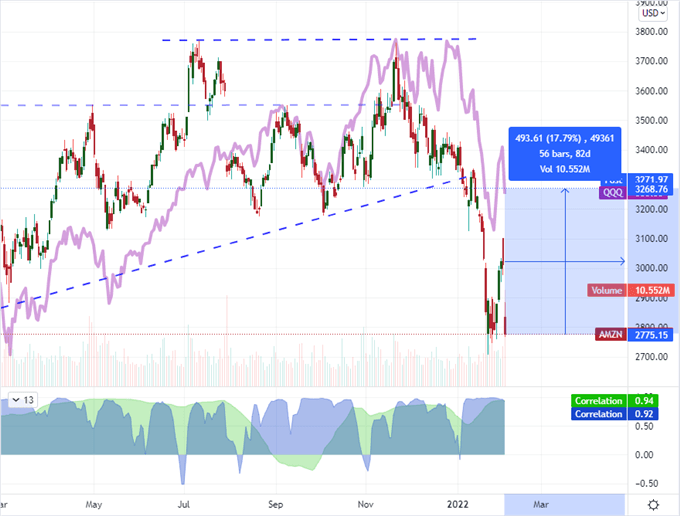 If you were watching the macroeconomic landscape this past session, something unusual happened: the Euro gained against the British Pound. This particular pair highlights a very unexpected turn for the markets given the outcomes of their respective central banks policies. For the Bank of England (BOE) the announcement of a 25 basis point rate hike is nothing short of impressive given that this is the first back-to-back hike from this group since 2004 – a move that puts it in a particularly rarified position among its peers. What’s more the outlook for tightening is still projecting a hefty 123 basis point through year end. Then there is the European Central Bank’s (ECB) actions. It held its exceptionally dovish position, but their was a notable wobble in its policy stance. Hawkish expectations picked up sharply from where they were a week ago. So, while the ECB is seen as much more dovish than its BOE counterpart, that was something previously not priced into the market. 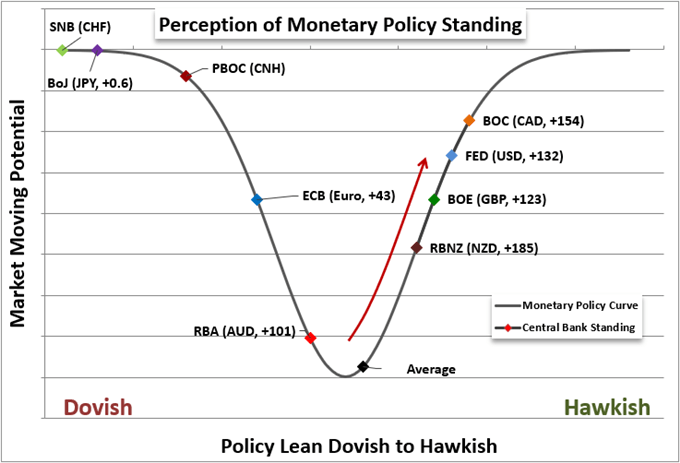 Markets are speculative in nature and expectations are priced into assets ahead of time. The BOE has been signaling its intent to normalize from its exceptionally accommodative stance for some time, which has in turn seen the British Pound appreciate alongside Gilt yields. In contrast, ECB officials, lead by President Lagarde, have attempted to assure that they would not be budging on their extremely easy course for the foreseeable future…up until yesterday. At the press conference, the central bank admitted that there was ‘unanimous’ concern about the persistence of inflation in the region and that a large minority even called for action at that meeting. More practically, President Lagarde made clear that rate hikes would be discussed after asset purchases ended…and that buying program would be discussed at the next meeting in March. So, while the Fed rate forecast is materially higher than the ECB’s, the biggest single-day EURUSD rally since December 1, 2020 is perhaps not so surprising. If there is another push – this time a dollar bearish spark – a move above 1.1500 may spell a medium-term shift. 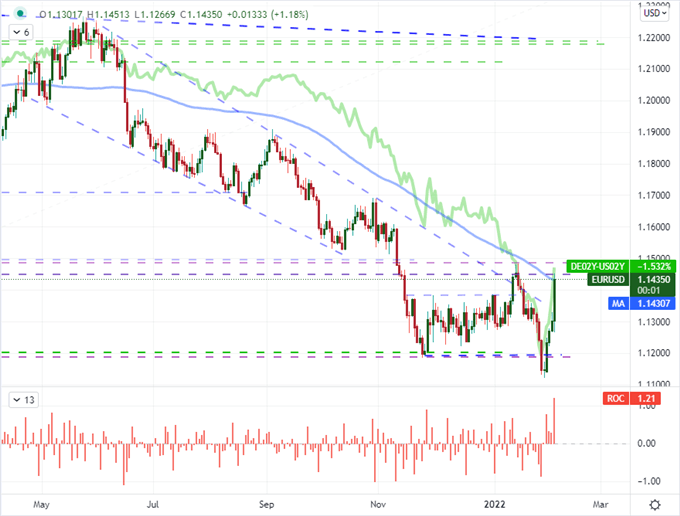 I am keeping a close watch on global monetary policy as a gauge for global risk trends and a relative speculative advantage/disadvantage gauge for currencies and capital market assets. That said, the updates around this theme will be far less explicit heading into the immediate future. We will be trading outright rate decisions with key policy determinants through Friday’s session. Top billing is the January nonfarm payrolls (NFPs) change from the United States. After the ADP private payrolls miss (-301k) earlier this week, the consensus forecast has been cut to +150k with a low spread of -400k among the economists’ calls. In the short-term, the markets have probably made more of an effort to discount the Dollar, so a bullish/hawkish outcome may carry the bigger short-term impact for the Dollar…and risk assets (bearish). It is also worth nothing that there is an employment update from Canada due Friday. The outlook for Canadian rates is even more aggressive than its US counterpart, but we should take the same kind of perspective view for market impact. 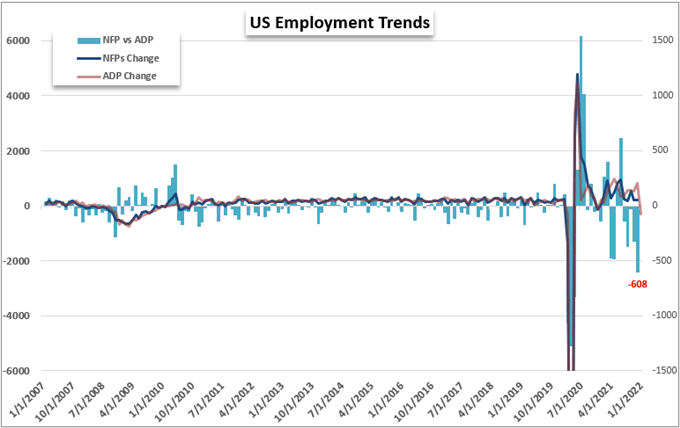