Nasdaq 100 Leads a ‘Buy the Dip’ Charge, What the Trend and Drivers Ahead?

Restoring Risk Appetite or a Buy the Dip Flash?

There were repeated reversals in the capital markets last week under the auspices of speculation lacking clear bead on conviction. Nonetheless the benchmark US indices closed out Friday with a strong rally that drove us back to the top of the volatile range. Whether a mere swing in the persistent back-and-forth or staging for take off would be have its first test through Monday trade. As it happens, bullish interests showed up to make it a remarkably productive follow through rally and break from range. The tech-heavy and speculative favorite QQQ Nasdaq 100 ETF led the charge with a 3.2 percent rally that would inspired its peer US indices while also leveraging its own Nasdaq to Dow (growth to value) ratio to its biggest single-day jump since March 9th. The question from here is whether this is another by-product of the relentless volatility of last week or the return of genuine bullish opportunism. I lean towards the former assessment. 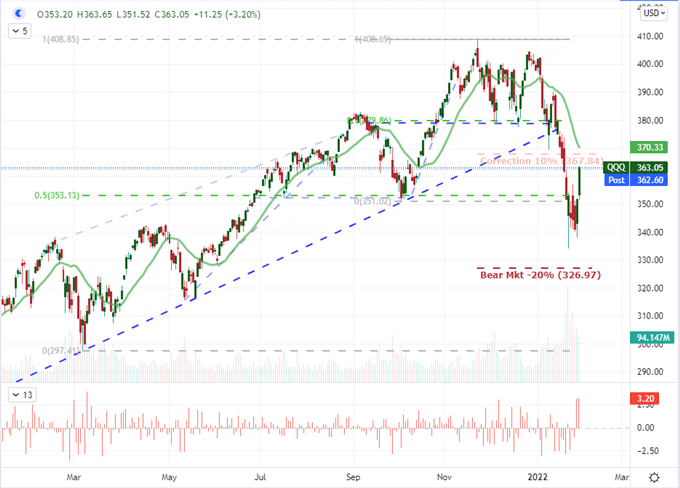 If you were looking for fundamental fodder to charge short-term speculative appetite to open the week, there were handholds. The growth implications of the surge in covid cases due to the omicron variant seem to have peaked worldwide over the past few weeks – though we are a long way to seeing the curve collapse. Relief from something a little more recent a risk premium were reports that diplomatic channels between Russia and the US over Ukraine were reducing the risk of harsh sanctions and perhaps worse. As far as relief rallies go, these are not particularly good catalysts for a lasting trend. Forecasts for monetary policy and growth still paint an unfavorable picture for still-expensive capital benchmarks. Until more significant technical levels are breached in a recovery, I will consider this a short-lived relief rally. To back this, retail CFD traders and speculative futures traders (via COT) were both leaning hard into a rebound. How quickly that appetite flags after the bounce will be very telling of intent. 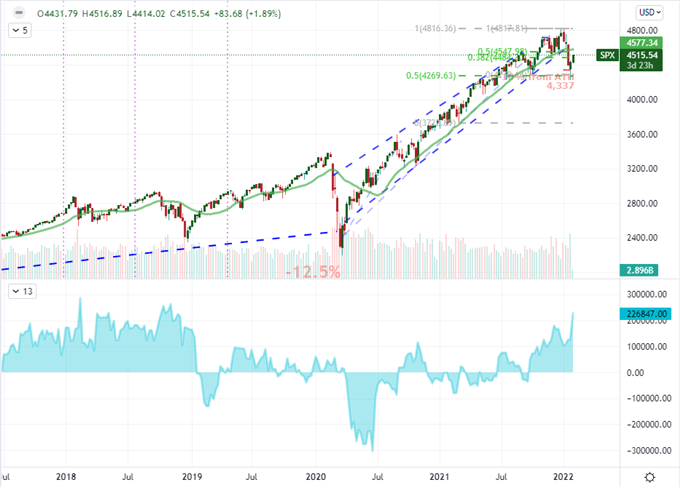 Another factor that could have played into a short-term, direction move in the US indices and a few other key benchmarks is short-term seasonality factor of month-end / month-open repositioning. Monday closed out January and we officially move into February with today’s trade. Historically speaking, January is a favorable month for risk assets according to the S&P 500’s historical performance; but that same benchmark suffered a -5.3 percent contraction this past month – the worst showing since March 2020, the height of the pandemic. The historical perspective was similar for the Nasdaq 100; but before that pandemic milestone, we hadn’t seen anything comparable since 2008. If this is indeed a temporary reallocation of funds, the market’s drive should dry up quickly – by today or tomorrow. 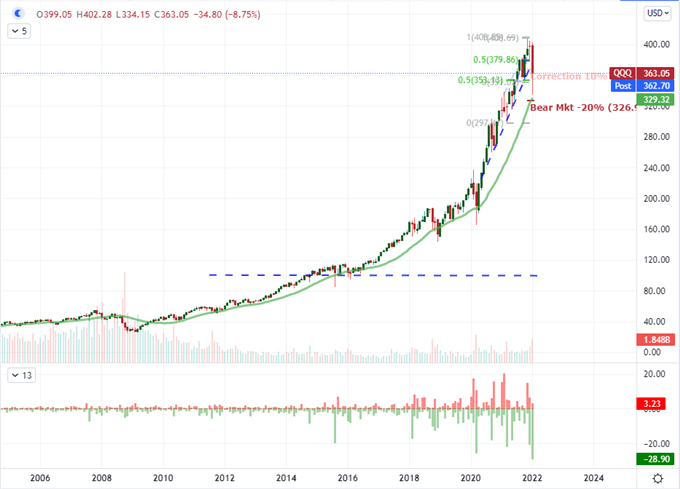 While the FOMC rate decision may be behind us, the influence of monetary policy over the capital markets is certainly not resolved. There are a number of direct central bank rate decisions on tap this week – RBA, BOE and ECB – while a number of key economic indicators will readily tap into different policy evaluations (such as the Friday US NFPs). As it stands, the rate forecast for most central banks is charged. Even at the most dovish end of the spectrum, we have seen data and rhetoric to call into question intent to keep the status quo. The Euro enjoyed a notable rally this past session despite an underwhelming Eurozone GDP update as ECB rate speculation firmly projects at least one hike (10bp) by year end. New this morning, we have also seen the Bank of Japan (BOJ) warn that the depreciating Yen could be a problem for policy officials. 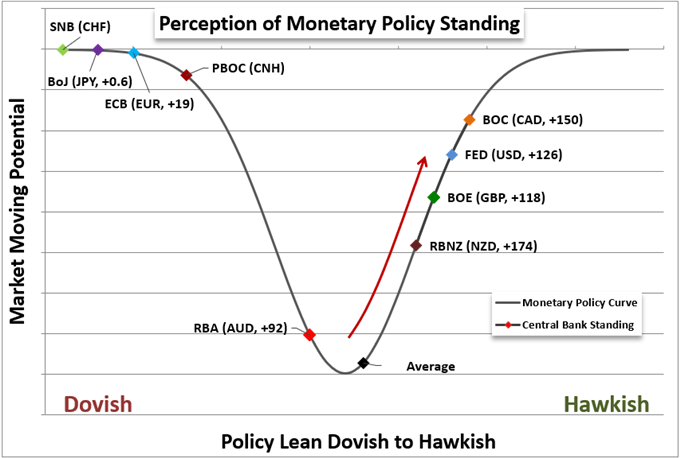 At the top of the list for monetary policy speculation for long-term investors and short-term traders alike remains the Federal Reserve. We didn’t have any meaningful macroeconomic event risk to digest through the opening session of the week, but you did have a spat of central bank speak that seems aimed at acclimatizing us to an impending normalizing wave. With insight from the Fed’s Daly, Bostic and Barkin; the message was clearly a high probability (but no promise) of imminent rate hikes. Fed Funds futures are still pricing in 115 basis points worth of tightening this year while swaps are certain of five, 25 basis points moves. Despite this persistence, the Dollar still took a notable hit Monday. Perhaps this was a reflection of the Greenback’s safe haven status – though the currency hasn’t really taken advantage of that role of late. 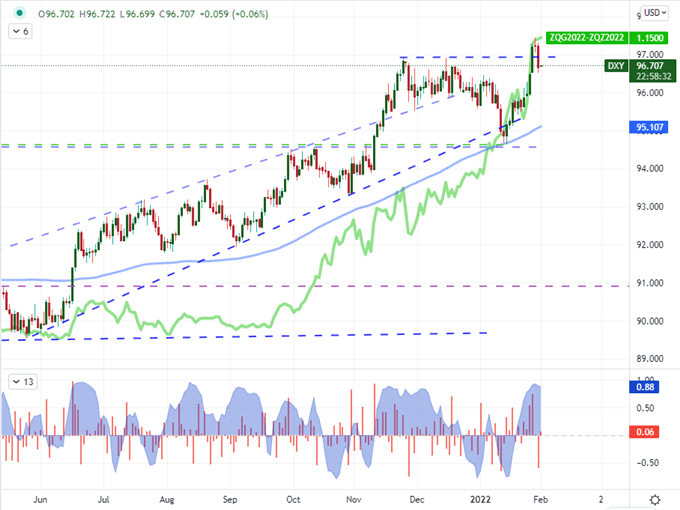 For those that think that the Fed rate speculation is on hold until the March 16th FOMC rate decision, you are likely to miss a few key fundamental updates this week that will be readily interpreted for accelerating or decelerating the 2022 rate tempo (currently pricing in five full hikes). Later today, the ISM manufacturing survey will give insight into factory activity in the United States which offers a better insight to upstream inflation pressures and supply chain issues. If you’re looking for a more distinct interest rate update, the Reserve Bank of Australia (RBA) is the first of three major banks due to weigh into policy this week. Swaps are pricing in 92 basis point of tightening this year which actually puts it at the lower end of the carry curve. Notably, the Aussie Dollar rallied smartly Monday ahead of the event risk. There are some pairs that seem more appealing if the Aussie currency were to rally (AUDCAD) or fall (AUDNZD), but I am particularly interested in AUDUSD which can play both ways. 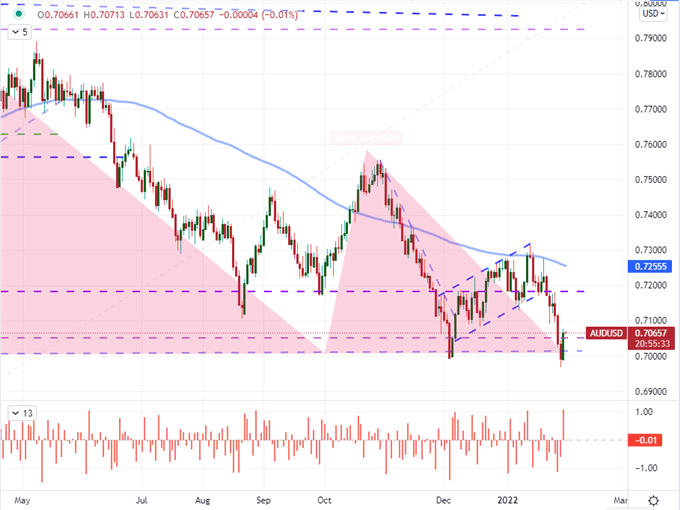 For scheduled event risk, over the coming 24 hours, the Australia central bank decision and US manufacturing activity report are certainly top billing. Other important indicators to consider include German retail sales and unemployment for the Euro, Mexican business sentiment, Canadian manufacturing and US job openings (JOLTS). In the alternative category, however, the most effective fundamental listing on my calendar is the corporate earnings due after the market close. On the one hand, we have FAANG member Google which will cater to an already-volatile Nasdaq 100. Alternatively, AMD will tap into supply chain constraints and Paypal is a fintech adjacent to defi. If we are looking for direct insight into the likes of Bitcoin, MicroStrategy should be followed closely. Then on the consumer side, Starbucks and General Motors will monitor small and big ticket purchases. 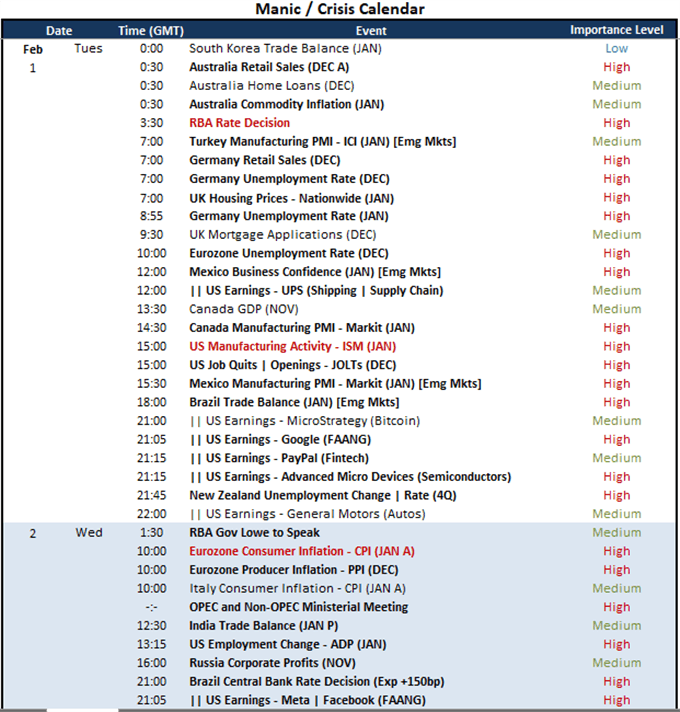