Dollar Breaks Higher with Fed’s Favorite Inflation Read Ahead, Where to for QQQs?

The US Indices Retain Extreme Volatility but Have Yet to Collapse

In the wash after Wednesday’s FOMC rate decision there is still a considerable uncertainty about the outlook for the markets amid a path of rising rates and recognition of the excess risk position the markets have put themselves into. Friday is the last stop for liquidity to balance exposure before the weekend drain, but there is little indication from the speculative benchmarks that there is a strong appetite to further deleverage or buy back into the dip. With the Federal Reserve’s favorite inflation indicator ahead and next week’s docket packed with high-profile event risk of its own, it doesn’t surprise me that the market isn’t willing to commit. That said, the volatility is palpable and persistent. Taking measure of the tempo, we find the VIX volatility index has held above 30 for a third day in a row – a feat not seen since November 2020. You can see the same concern in the actions of the S&P 500 and the other primary US indices. The SPX maintains a 10-day ATR (realized volatility) at levels not seen since September 2020; while the difference between spot and the 20-day moving average (a momentum measure) holds at its most bearish since the pandemic back in March 2020. These are not encouraging backdrop conditions. 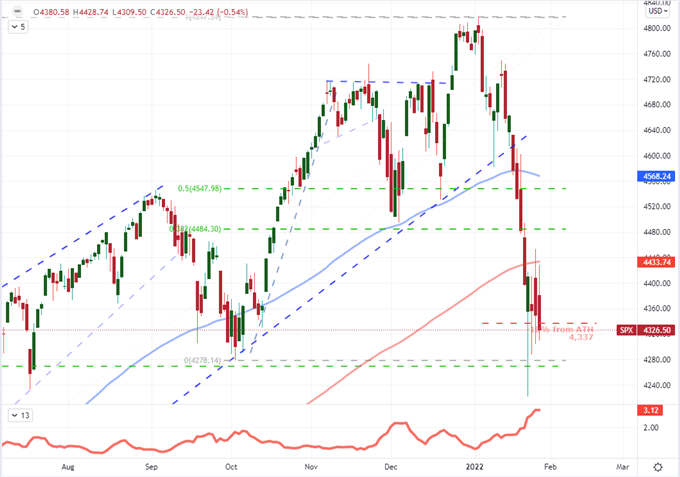 Tracking out the market’s performance through the active trading hours of Thursday’s New York session, we were once again treated to a strong intraday reversal. Where the Dow reversed from highs to a virtually unchanged position, the S&P 500 flipped to close -0.5 percent in the red and the Nasdaq 100 suffered a far more serious -1.2 percent drop on the day. It is this tech-heavy index which most interests me heading into Friday’s open. After the close this past session, we had a run of interesting earnings with very macro considerations to them. Robinhood took a serious hit in afterhours trading after a worst-than-expected -$0.49 per share loss that cut into retail trading expectations. United States Steel is an inflation and supply chain measure, and its own $3.64 EPS was a miss – though it is not clear whether the broader market will interpret as readily as the stock. The big ticket item though was Apple’s impressive $2.10 EPS beat on a massive $123.95 billion in revenue. AAPL shares were up sharply afterhours as was the QQQ Nasdaq 100 ETF. Let’s see how much heft this largest market cap public corporation has over the global markets with Friday’s open. 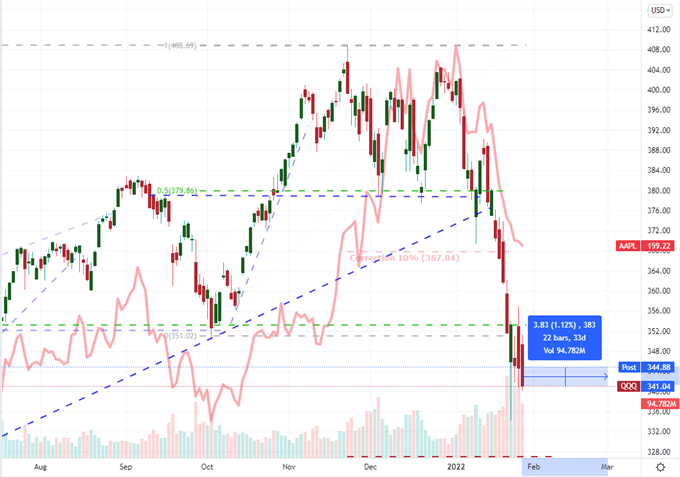 What’s Left and What’s Ahead

We have bounced around between some serious scheduled event risk this week, and the gauntlet is not fully over just yet. Aside from keeping a very close eye on how AAPL and the tech sector perform through Friday’s New York open, there are a few other macro matters that should be marked on the threat matrix. On the docket, the earnings calendar has a few more meaningful updates that are worthy of your attention: blue-chip Caterpillar as a gauge on growth forecasts and Chevron reflecting on energy profits as crude oil prices soar. Outside of the US, Europe’s calendar has regional sentiment surveys for January, French 4Q GDP and the Germany unemployment rate. If you are interested in Euro potential/volatility, be mindful that EURUSD may look clear after its 1.1200 drop, but the Dollar is a stronger influence here. EURCHF and EURJPY are more appealing crosses to me. Off the docket, I am keeping a very close eye out for the Sue Grey report on the Johnson government’s actions in the UK for sterling impact as well as the tensions between Russia and the West over Ukraine. 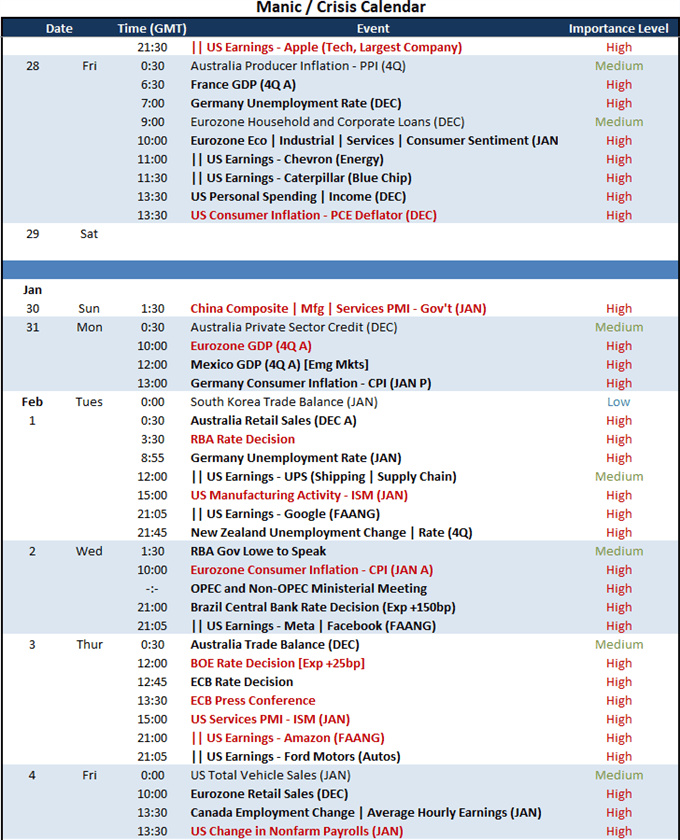 For top scheduled event risk, the highest list on my calendar is a seemingly innocuous US PCE deflator indicator for December. If you don’t know the relevance of this measure, it is the FOMC’s preferred inflation indicator (versus the CPI as it is derived from the same measure that is used to calculate GDP). This past session’s 4Q GDP reminded traders of the central bank’s posturing for a more hawkish path ahead in 2022, so there will be even fewer steps interpreting this upcoming event risk as a charge for policy decisions. Below, we have the Dollar’s benchmark cross, EURUSD, overlaid with the inverted implied rate forecast for this year derived from Fed Funds futures. Having pushed all the way to over 112 basis points, we are pricing in a 50 percent probability of a fifth hike when all is said and done. That’s aggressive, and I believe overdone. Of course, it doesn’t pay to position according to personal beliefs. What for the market to come around to your assessment…if it ever does. 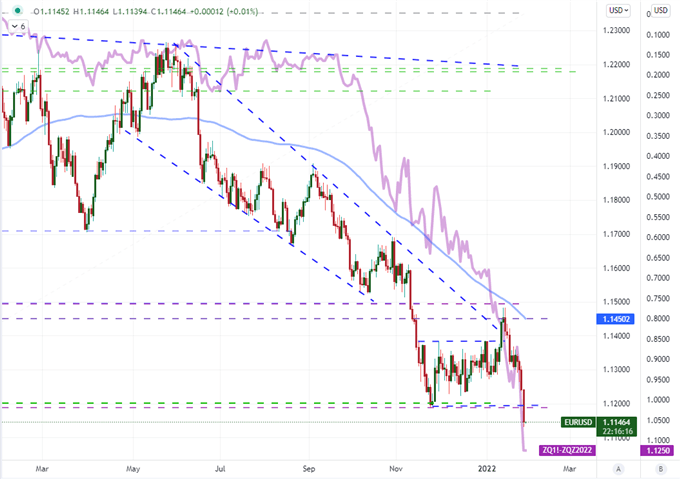 EURUSD looks particularly charged against the backdrop of a strong Greenback. Having cleared the 1.1200 floor that has kept it in check for approximately two months, it seems free and clear on a technical basis. However, follow through is not a guarantee – and it has in fact been the exception to the rule in most cases for the financial system lately. I still like USDJPY below 113.50, but we have bounced pretty far from that support as the surge in US interest rate forecasts have overridden the risk aversion pressure that would pull the pair lower. If rate expectations peak and risk aversion keeps up (and particularly if the two come in concert), this cross is one of the most primed reflections. Meanwhile, I see merits to the GBPUSD range of 1.3700 to 1.3150 which we are in the middle of at the moment, but the expectations are shifted out to next week’s BOE rate decision which is expected to generate a hike. I also like AUDUSD after its slide this week into a very prominent technical floor that completes a head-and-shoulders pattern that has set up since July 2020 with a neckline at 0.7000. The RBA is next week, and a dovish turn could be a meaningful catalyst. 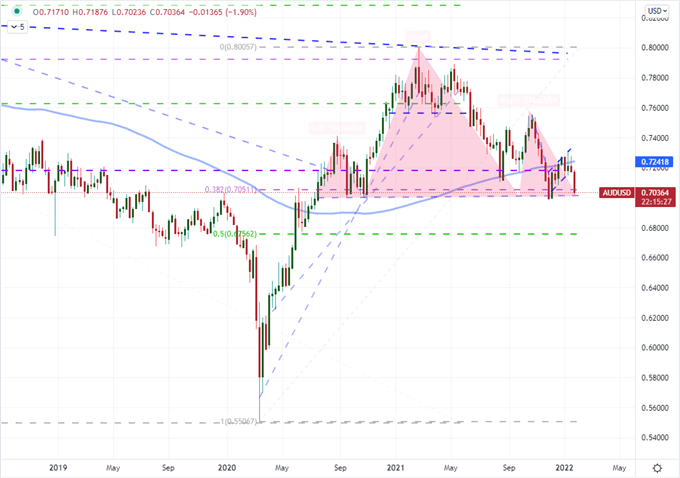