Nasdaq 100 Rings the Bearish Bell Before the FOMC, US GDP Hit

A Serious Risk of a Technical and Conventional ‘Bear Market’

The markets that have led ‘risk appetite’ through the recovery since the end of the Great Financial Crisis nearly 13 years ago are signaling serious problems for the financial system. After this past week’s fireworks, the threat of a systemic reversal in sentiment and technical bear market for speculative benchmarks has increased substantially. What further compounds the erosion in trader enthusiasm is the incredibly dense run of scheduled – and lurking unscheduled – event risk over the coming week. Before we weigh in on the sparks that will fly, it is first important to get a sense of the backdrop heading into the new week of trade. There is no small measure of risk aversion that we will pick up on from last week’s plunge. The steepest fall from grace remains the QQQ, ETF representative of the Nasdaq 100, which dropped -7.5 percent this past week – the worst tumble since March 2020 and the major US index that is furthest down the path of the official ‘bear market’ (a -20 percent retreat from all-time highs). There is an immediate range support at 350 for the QQQ (or 14,450 for the underlying Nasdaq 100) to consider at the open of the new week. However, after progressively slipping range support at 380 then a multi-year trend change floor, triggering the technical correction and dropping the 200-day SMA; pure chart levels seem to hold a lot less weight. Watch instead for the collective conviction of the masses. 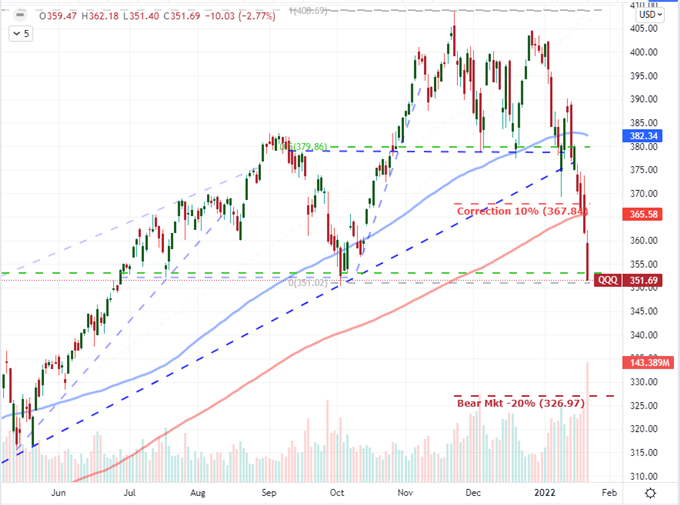 Event risk can prove a meaningful catalyst for market volatility and potentially the genesis of big trends. However, it isn’t always the news that urges the market development. Sometimes, sentiment can shift of its own accord and redefine how data points and updates are interpreted into price action. In other words, if the markets are ‘bearish’ overall; unfavorable data can act as gasoline to the fire while encouraging updates are generally overlooked. I believe that the general mood of the market is shifting in exactly this way. That will make it more difficult to simply return to the prevailing bullish trend of the post-pandemic era, but it doesn’t necessarily quash the dip-buying efforts of a very short attention span market. This is the exact mentality CFD traders (from IG) are exhibiting with regards to the S&P 500. Positioning is nearly 64 percent long the battered index for the most charged bullish view on recent record. 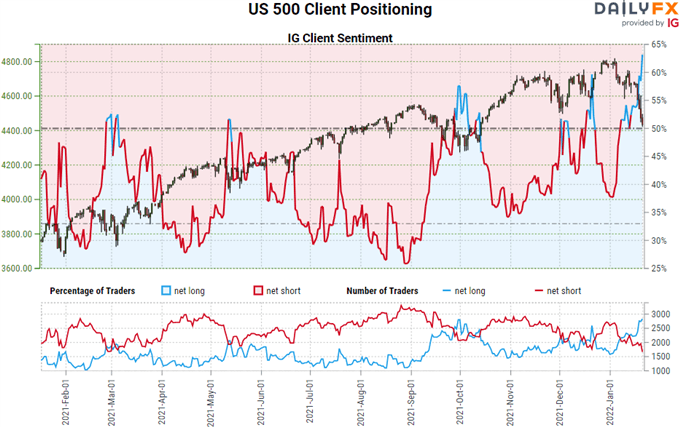 In these transition phases where ‘significant corrections’ are evaluated against ‘true reversals’ I like to take a tactical approach to trading. Practically, that refers to shorter-duration positions that are agnostic to a long or short bias. That forces me to be more critical of setups and think through reasonable time frames. While my views currently run tactical, I am nevertheless tracking conviction in the market to see how the general trends will eventually settle. One of the most important measures of commitment to trend is the state of breadth. While the major US indices have suffered significantly over the past trading week, other global readings for speculative appetite are in various states of commitment. European (eg the UK’s FTSE 100) and Asian indices (Japan’s Nikkei 225) have pulled back but are not in the same type of freefall. Emerging market, junk bonds and carry trade are generally in the same situation considering they weren’t sporting the same degree of premium. Then again, not all measures are as protected. Bitcoin took a particularly important hit through the end of this past week. The benchmark cryptocurrency suffered a -10.4 percent plunge Friday that ultimately broke a range (head-and-shoulders pattern?) floor at 40,000. 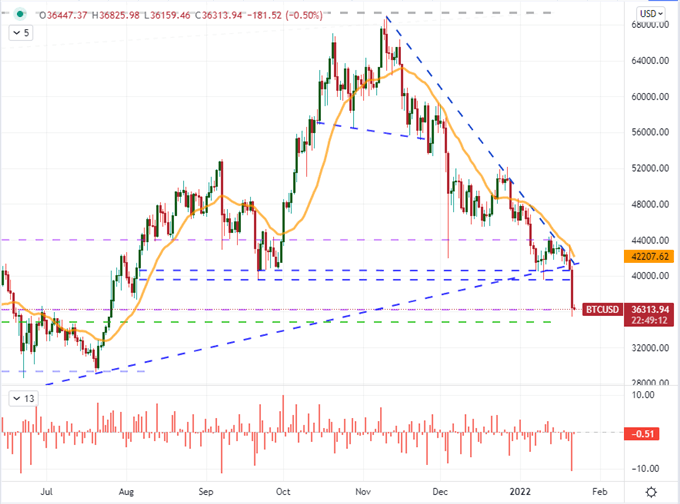 While a fire can be a dangerous think in the markets, its risk is materially influenced by the fuel that builds upon or starves the threat. As it happens, the tinder is particularly heavy over the coming week. There are multiple scheduled-based and unscheduled issues on hand for the coming week. Thematically, growth will be a big issues throughout the week. Monday opens with the major economies’ January PMIs. Tuesday brings the IMF’s WEO economic forecast update; then it is back to US and a few key European GDP 4Q releases on Thursday and Friday respectively. Earnings is another matter with a more equally distributed run. Monday offers IBM’s figure, Tuesday General Electric and Microsoft, Wednesday Intel and Tesla, Thursday Apple and Robinhood, and Friday provides blue-chip Caterpillar. Overall, top event risk is unmistakably the FOMC rate decision on Wednesday. Though not the most hawkish major policy group, its intentions seem to carry the global perspective. 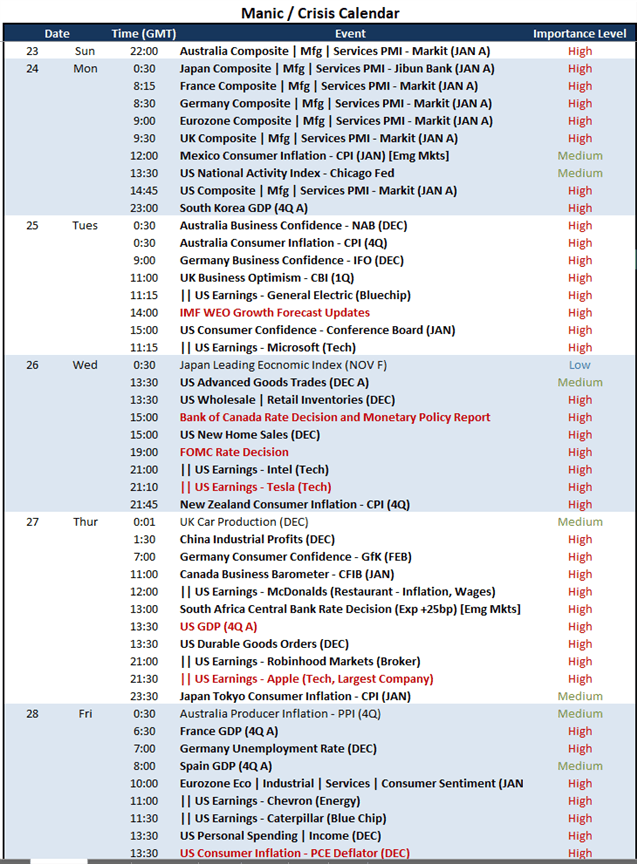 At the last FOMC rate decision in December, the central bank signaled a sharp turn in its policy bearings. From a tentative one rate hike in 2022, the group upgraded its forecasts to three, 25-basis point increases. Since that announcement, the outlook has grown even more hawkish with Fed officials making an unmistakable effort to prepare the market for a further escalation for the upcoming meeting. With the most dovish members earlier this month raising the floor on expectations to three hikes for this year, it is clear that the range has moved sharply higher. We are very likely to see this reflected in the rate announcement and press conference on Wednesday, January 26th. That said, this is not one of the updates that will come with official forecast updates (SEP). Therefore, the market will still be left to interpret and price as usual. As of Friday, the Fed Fund futures were pricing in a high probability of four rate hikes in 2022 and the first move coming in March. If that outlook flags and/or risk trends slip, the Dollar is at risk of dropping. It is currently being treated more as a carry and risk currency. 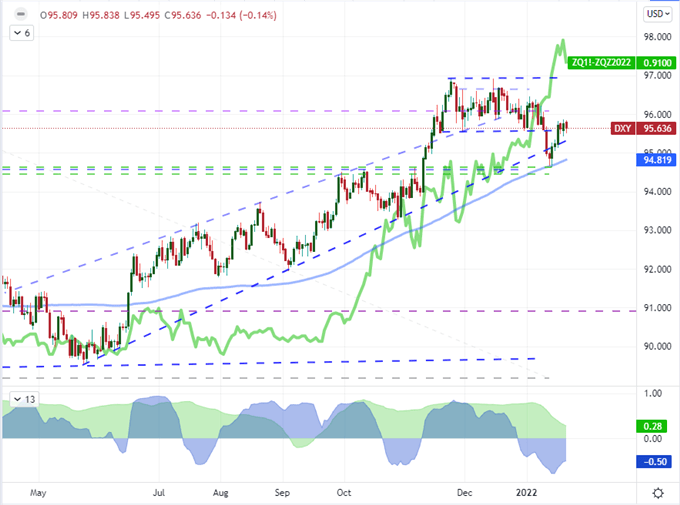 When looking at the US docket, there is a lot to take in and compete for our attention. Not only do we have the Wednesday FOMC rate decision. Monday has the US PMI, Tuesday the Conference Board Consumer Confidence survey, Wednesday the policy announcement, Thursday 4Q GDP and Friday the PCE deflator (the Fed’s favorite inflation indicator). That creates a noisy fundamental backdrop from which the market may struggle to develop a clear trend. In contrast to that situation, we have the Canadian docket which is focused largely on one, dominant fundamental event: the Bank of Canada (BOC) rate decision. At its peak, rate forecasts were projecting six rate hikes in 2022 – even more hawkish than the Fed. That leaves the Canadian Dollar at particular risk of being over-indulgent. 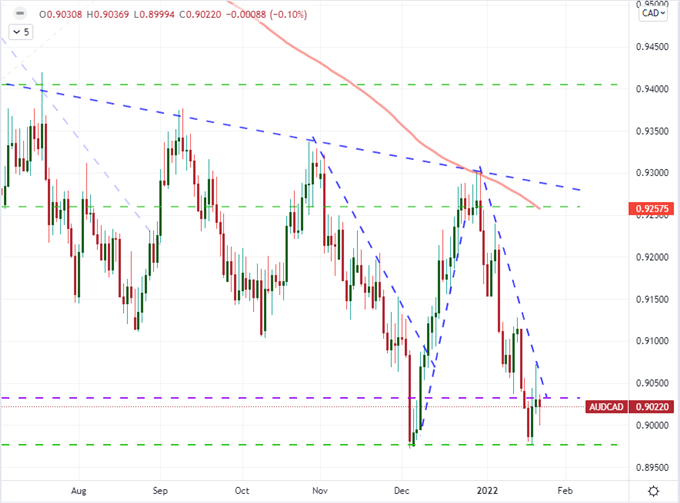