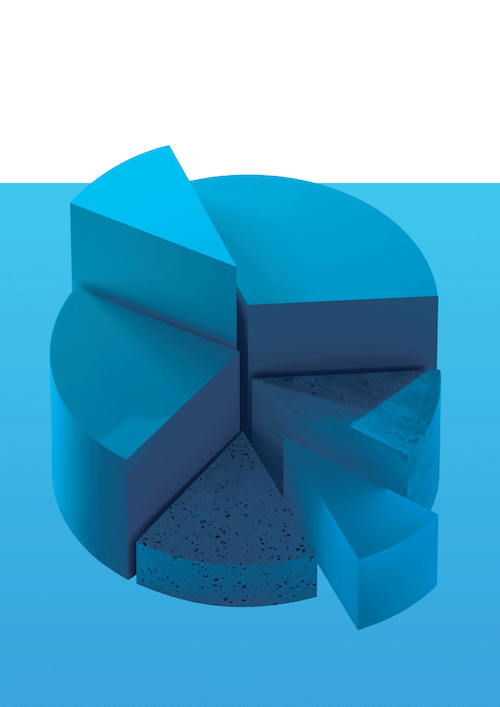 Recommended by John Kicklighter
Options for Beginners
Get My Guide

Another US Index Threatens a Technical Reversal

The US reopened after an extended holiday weekend to another threatening slump for key speculative assets. In particular, the country’s principal equity indices are making technical overtures that fuels serious debate over whether we have crossed a critical threshold whereby bearish interests will inevitably take over. I’m a natural skeptic, so the break alone does not readily translate into an imminent trend. These markets remain stubbornly anchored and gaining serious bearish traction has been the pointed outlier scenario. The true tipping point for me will not be a particular level of support or resistance but a clear theme that can generate practically generate follow through. That said, when charts move to clear boundaries, it will bolster the rank for those calling a turn. For the SPDR ETF (one of the principal derivatives for the S&P 500), the drop below 460 (4615 on the index) technically clears the trendline support that stretches back to April 2020 on my chart. That said, we have the 100-day moving average still below spot, the midpoint of the October-present range is at 453 and there is a rough range of lows over the past few months down to approximately 450. Some may be convinced that the floor has been breached, but just as many can claim it is reinforced by any one of those subsequent milestones. 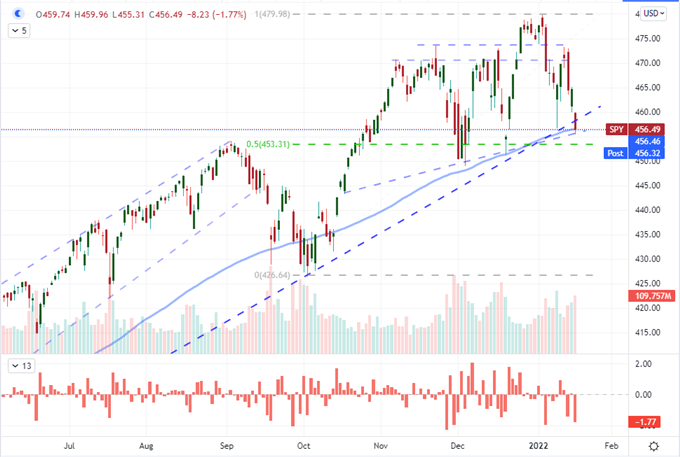 In evaluating when the market is ready to run versus a bout of errant volatility is simply creating technical upheaval, it is helpful to find what is – or could be – motivating the masses. The more fundamental and universal the driver, the more effective it can be with establishing traction. I think the reversal of monetary policy’s decade of support of risk appetite through extremely accommodative monetary policy is such an occasion for systemic change. That said, the main event on most calendars is still beyond the immediate horizon. The FOMC rate decision is on for next Wednesday, January 26th. It is possible that speculation for this major event moves the markets or perhaps another broad theme or even an organic development in sentiment itself; but that is improbable. Nevertheless, to keep tabs on the evolution of risk appetite, I monitor the performance of sentiment-influenced assets to gauge correlation. Where US equities are taking a hit, global stocks are and emerging markets are less put off this week thus far, carry trade is fairly stable and crude oil futures is swelling – perhaps a further contribution to Treasury yields’ surge. So, while the S&P 500 and Nasdaq 100 may have broken support, it doesn’t seem like the bulls across the market are ready to throw in the towel just yet. 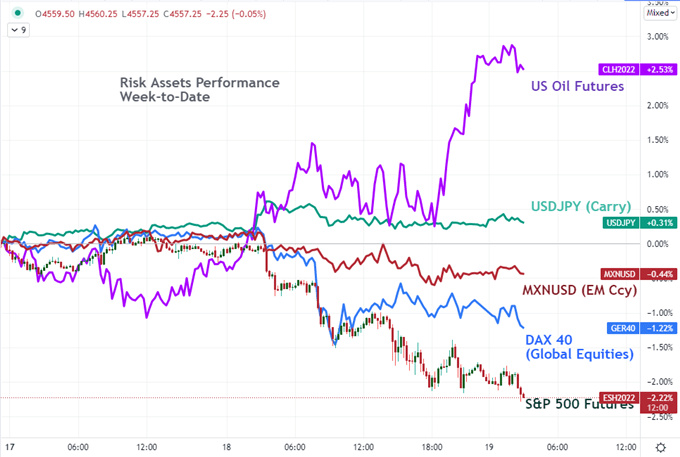 Fundamental Catalyst and Setups for the Present

While we are in our holding pattern ahead of next week’s important FOMC event, there are still fundamental events crossing the wires and generating volatility. This past session, the Bank of Japan (BOJ) dashed the recent indulgence the market expressed in pricing an unlikely shift from the group’s long-standing easy monetary policy stance. When it was clear no discussion of rate hikes would come any time soon, the Yen was pushed into retreat – even offsetting the bearish risk aversion pressure for a while. In the upcoming session, there is further rate speculation to entertain with UK and Canadian inflation as well as a slew of US earnings that will span multiple sectors and macro themes. For corporate performance, the Bank of America and Morgan Stanley updates will give further shape to forecasted revenue between growth and higher rates. Goldman Sachs’ miss didn’t do the financial sector nor the Dow any favors. I will pay closer attention to the inflation and supply chain insights that Proctor & Gamble, Alcoa (commodities), ASML (semiconductors) and UnitedHealth will reflect upon.

Back to the monetary policy theme, it isn’t just the Federal Reserve that has pulled the attention and imagination of global investors. While the US bank may have pushed its way to the most hawkish stance amongst its major peers – at least in the market’s collective perception – there are other hawks in the fold. Both the Bank of Canada (BOC) and Bank of England (BOE) are considered hawkish groups that are seen hiking multiple times this year. How fast and aggressively they move will very likely depend on how much pressure inflation data exerts on their economies. Both countries’ readings are expected to tick higher, to 4.8 and 5.2 percent respectively; which is pressure enough to keep the rate hike drums beating. If it is faster though, the short-term rate outlook still has room to shoot higher. There are many Pound and Canadian Dollar crosses to consider, but I like looking for bullish and bearish options. Should a hawkish view take hold, I like GBPUSD bouncing off 1.3600 support and any progress EURCAD makes below 1.4150. Alternatively, EURGBP breaking 0.8375 and AUDCAD reversing off 0.8975 make for good dovish/bearish reversal cases.

Chart of GBPUSD with 100 and 200-Period Moving Average (Daily) 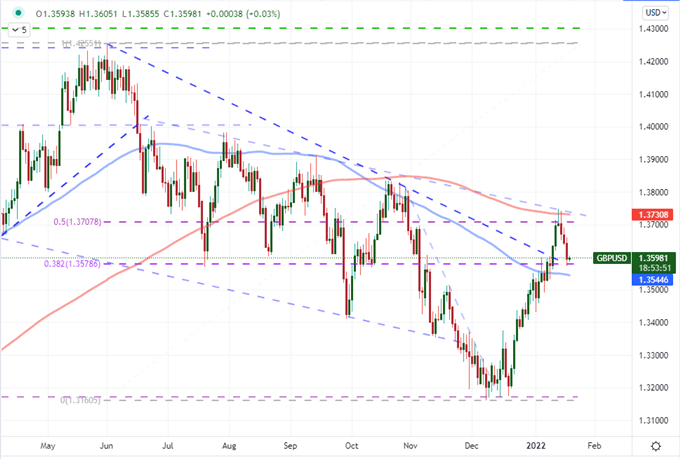 While the Federal Reserve’s rate decision is still a week away, that doesn’t prevent the market from stirring speculation which can translate into tangible price action. This past session, US Treasury yields extended their surge to multi-year highs the 10-Year surpassing 1.85 percent while the 2-Year (closer to the Fed’s outlook) broke the 1.0 percent mark. In turn, Fed Funds futures extended their own charge with the market pricing in just shy of 100 basis points worth of tightening through year’s end. These same futures are also showing certainty of a rate hike by the March 16th meeting. How much more aggressive can that forecast grow? There have been some high profile CEOs and market commentators suggesting a tempo of four to six in 2022 is appropriate, but they are the outliers. 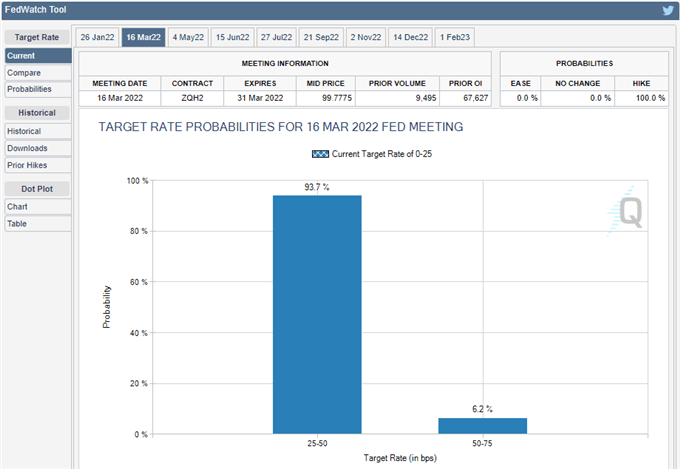 As US rate forecasts continue to climb, it is worth noting two important connections. One, while the Fed is seen as being more hawkish owing to its own perspective and language, their perspective is being applied to other major policy groups as well. That can lead to a collective charge for carry, but it can also erode the ground that risk appetite has been built upon. Alternatively, with the ongoing rally in yields, the Dollar seems to have pulled up from its technical breakdown from last week. This is a move that seems to have stemmed the bleeding rather than revived the bulls, but this correlation between rate forecasts and Dollar performance is one to be mindful of for more than just the purposes of trading FX. 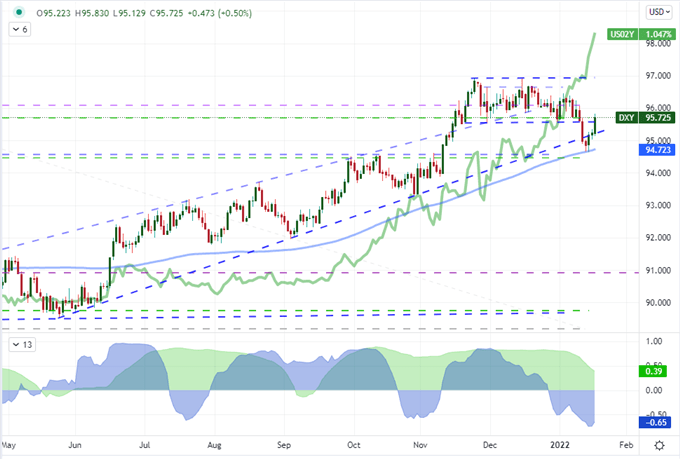