Risk appetite notched some very remarkable performances through this past session to add further hope that 2022 will pick up with the previous year’s momentum – at least for those with a bullish predisposition. The top player on my radar was the Dow Jones Industrial Average which gapped to a record high on the open and extended its gains to dispel any technical debate over whether the index was putting in for a bullish break. Yet, that wasn’t the only – or the most impressive – performance at the end of the day. The UK’s FTSE 100 index rallied to a multi-year high while the Australian ASX 200 charged to an intraday record high and the Yen crosses had their second best overall performance in 13 months. If we were willing to look at these few outperformers alone, it is easy to see why bulls would be satiated. Yet, there remain problems extrapolating a broader and stronger trend from these few highlights. 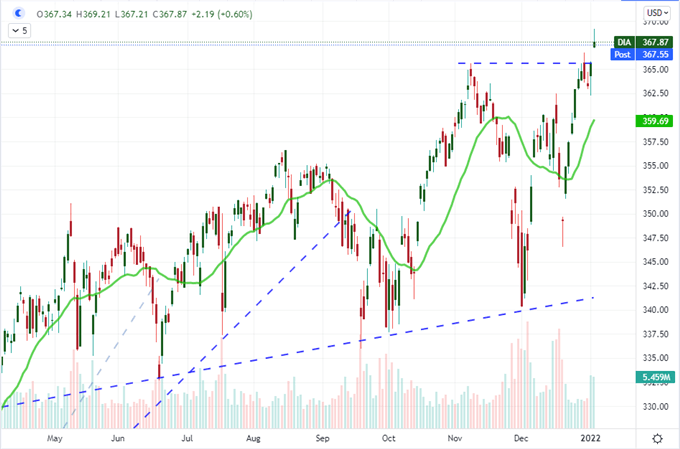 One of the most immediate points of scrutiny I drew to the Dow’s individual strength was disparity in performance from the other major US indices. The S&P 500 which was in the same general position as the Dow Monday followed with a session where it was virtually unchanged. Ultimately, it was the Nasdaq 100 that was the standout for underperformance. The -1.4 percent drop adds further pressure against the tech-heavy index that was such a consistent outperformance relative to the ‘value’ and broader indices last year. From the ratio of the Nasdaq 100 to Dow, the -1.9 percent tumble in relative value between the two was the second biggest single-day slide in seven months and a notable extension of the retreat from Dot-Com boom/bust high that we revisited at the start of December. This can be chalked up to a shift in preference for risk appetite expression and not a general unwinding, but most reversals begin with tumult at the top of the pyramid. 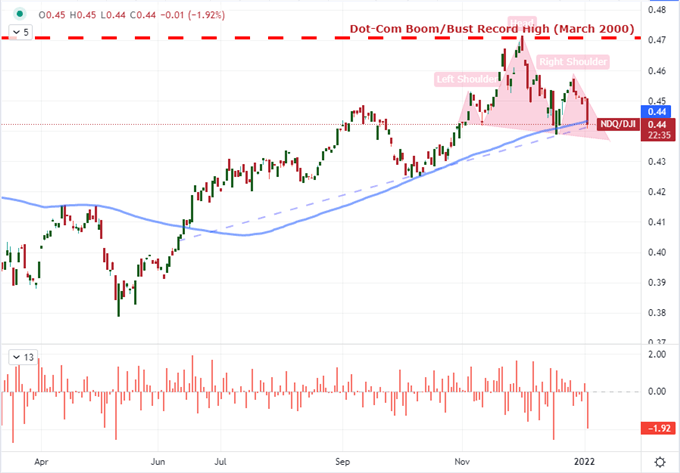 Liquidity is Still Filling Out

Assessing the sentiment scene more universally, there was a notable lack of enthusiasm to conform to the Dow from the likes of emerging markets, junk bonds and distinct speculative favorites like Bitcoin. If we were looking at a genuine swell in risk appetite to start 2022, it would make sense that the assets with the highest relative yield and/or most sensitive to sentiment trends would at least keep pace – or more likely outperform. What we were seeing this past session was likely an aftershock of beginning-of-year liquidity. A number of financial center countries were offline Monday in observation of the New Years holiday, so their first day of trade which see the redistribution of sidelined capital occurred on Tuesday and gave some modest tail wind to those markets that were already open. Ultimately, bullish movement is bullish movement; but follow through for markets not already treading record highs with an established momentum to rely upon are not likely to subsist on this influence alone.

Chart of Risk Asset Performance Over Past Month (4-Hour) 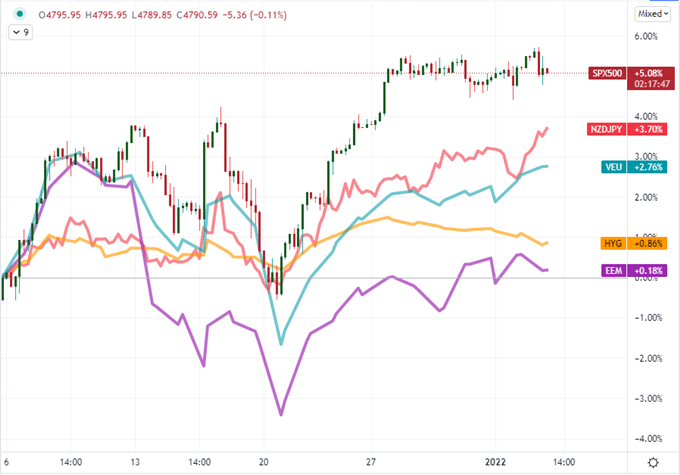 The Dollar is Already a Fundamental Highlight for the Week

The US Dollar has exhibited the same push and pull from the liquidity currents; but in the currency’s case, the market may more quickly make the transition back to fundamental considerations. The Greenback slipped against most counterparts this past session with notable exceptions from EURUSD and USDJPY – both very liquid pairs. Though it didn’t seem to fully compute for the markets, the ISM manufacturing activity report offered up a meaningful update. The headline reading dropped to 58.7 against 60.0 expected with a slip in new orders and improvement in employment. The important reading though was from the prices component which dropped to 68.2 against a more moderate slide to 79.5 expected. While not itself confirmation that we have seen a peak in inflation and perhaps the top in supply chain issues, it presents a strong argument. Considering the Dollar has drain considerable strength from the dramatic increase in Fed rate expectations through the final three months of 2022, this could be a serious threat to the currency’s buoyancy. 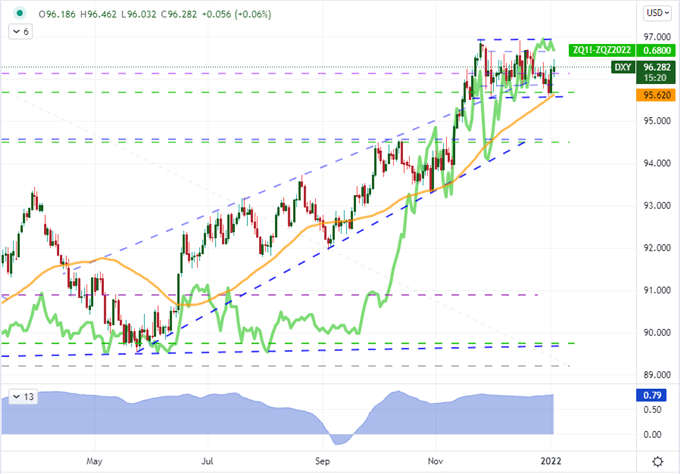 Taken a step further, USDJPY combines too features of the imbalanced market elements that we are potentially looking at – which is what led the cross to be one of my favorite setups for Q1 2022. All of the Yen crosses enjoyed a boost this past session which is likely associated to the reopening of the Japanese markets after the extended holiday weekend. Japanese investors generally push their capital abroad to generate yields given the historical deflation and low rate environment within the country. If risk trends don’t keep a firm footing, a slip would be particularly impactful for these crosses (including USDJPY) after the recent swell has imbued short-term premium. Further, add in the possibility of a deflated rate forecast for the Fed and there are complementary forces acting against the pairs push to five year highs and a trendline that stretches back to the historical highs the exchange rate has trekked. 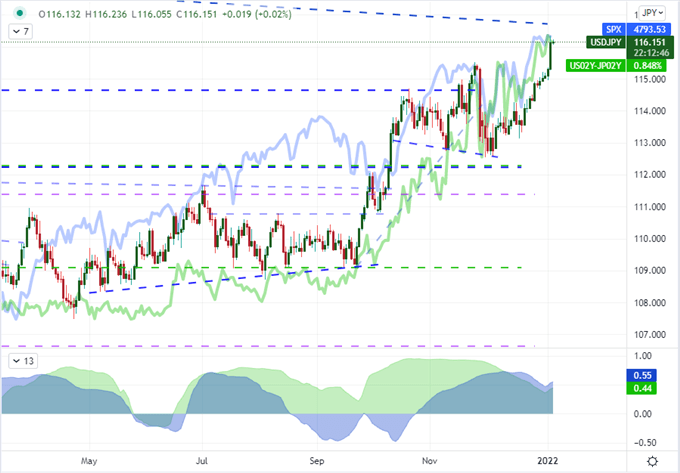