After the tumultuous week we have left behind, seeing the hearty and fairly-consistent rebound in ‘risk-oriented’ through Monday’s session is likely lending to a general sense of relief for many harried investors. However, seasonal norms and expectations built on a ‘diamond hands’ mentality is a risky perspective for those looking to safe guard their long-held exposure in the markets. For the tactical, shorter-duration participants; their already general state of readiness amplified by recent volatility seems more appropriate for the uncertainty that we continue to face. There is little arguing the rebound in risk assets (US and global indices, emerging market assets, junk bonds, carry trades, etc) to start this week, but the traction it represents should not be so readily accepted as commitment. While a sizable bounce, there remains an elevated level of volatility in the financial system which could just as quickly flip the expectations. It is worth noting that the implied element of the VIX remains uncomfortably high as does the realized volatility of measures like the S&P 500’s 5-day ATR (average true range). For me to be comfortable with a buy-and-hold perspective on stretched measures like the S&P 500 through the December holiday period, I’d expect volatility and volume to steady in line with the norms of price. 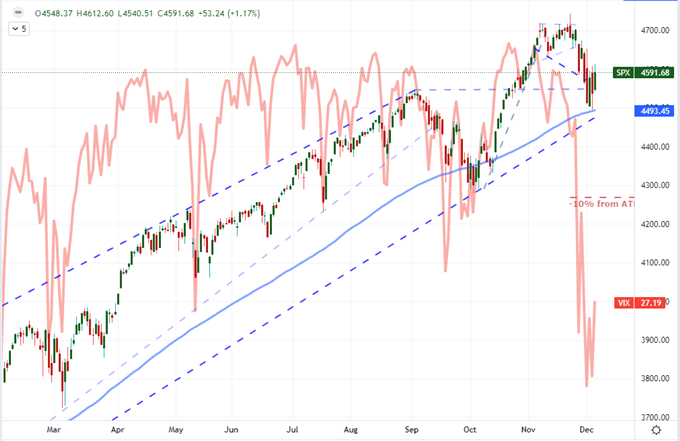 A concern of mine in the most recent risk recovery is the disparity in performance of a couple of closely related risk benchmarks: the Nasdaq 100 and Dow Jones Industrial Average. These two indices are highly correlated over the long-term, but the divergence between them speaks to a sometimes unhealth backdrop for speculative preference. Until last week, there has been a progressive outperformance for the tech-heavy index pushing its relative standing to a record high versus the value index – overtaking the Dot-Com boom/bust record of March 2000. Since that peak on December 1st, however, there has been a steady retreat. Even this past session where the broader markets were on their front foot, the Dow’s 1.9 percent rally soundly outstripped the NDX. That may seem a strong sign of appetite for value rather than the fleeting appeal of short-lived speculative swings; but given the proximity to records and how late in the season we are, it doesn’t seem a particularly fruitful time for a productive bull phase. 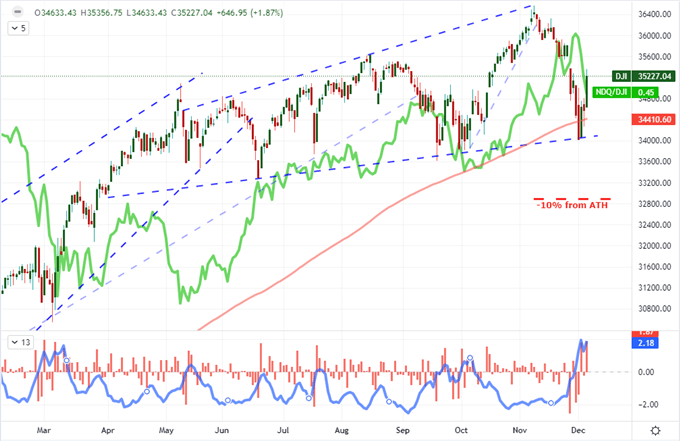 From the fundamental perspective, there wasn’t much in the way of scheduled event risk this past session aside from some construction activity reports and a sharp drop in German factory orders in October. That lack of high-profile event risk can allow distended speculative interests to soothe their wounds. The concern around the Omicron variant and the general forecast for the economy are tangible contrasts to the abstract risk and liquidity matters. One matter that has proven particularly important to shaping the landscape this past month has been the outlook for monetary policy. Specifically, the Dollar has benefit from the hawkish drift with interest rate forecasts moving forward in 2022 and the time table for the taper to end similarly advancing. After Chairman Powell and a few of its colleagues made an effort to explicitly direct expectations through this past week, it seemed the market was vindicated in driving yields and the Greenback higher.

Yet, now that we are in the media blackout ahead of the December 15th meeting; tangible updates are giving way to sheer speculation – that is until we get to Friday’s CPI release. This break has seen the Dollar’s climb flag, leaving the currency to look stretched against major counterparts. EURUSD has not put up the most productive, one-sided move; but it has worked its way into a clearly ‘terminal’ wedge. A break does not have to find follow through, but a counter-trend move (bullish) would likely find the most traction on sheerly speculative terms. 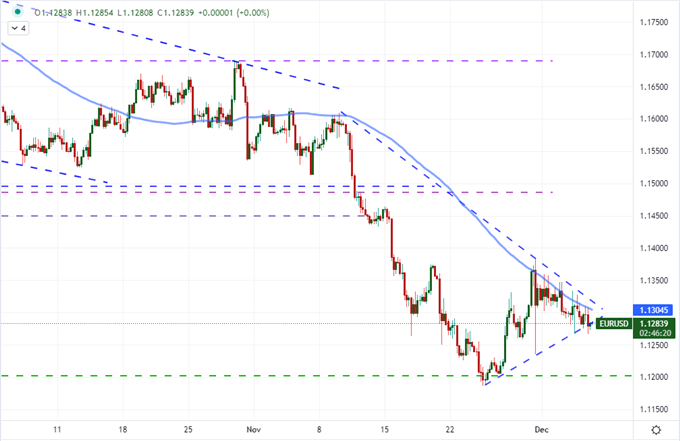 If you are looking for more loaded crosses, there are strong cases to be made of GBPUSD and USDCAD where the counter currencies have sported their own aggressive frate forecasts. That said, the Bank of England last left it with a disappointing hold on what was expected to be a sure hike – and this month’s meeting is an uncertain call – while the Bank of Canada is due to deliberate after its full taper on Wednesday. Of course there is event risk from both of these currencies, but my preferences are stirred more by an acute weakness for the US Dollar. One pair where USD weakness could be uniquely exploited is through AUDUSD. The pair is facing the RBA rate decision Tuesday morning and the bar has set to a particularly dovish level (relative to major counterparts). That makes it easier to ‘beat’ expectations and charge a recovery move. If the central bank keeps an unmistakably dovish tone, though, we will be looking some undetonated technical ordinance. 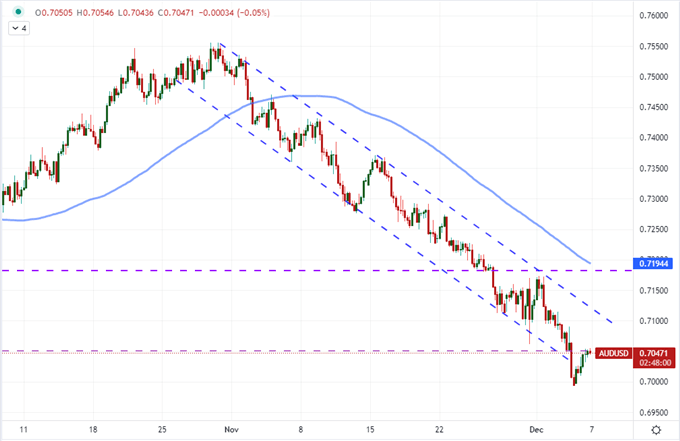