Risk appetite is fairly deflated heading into Friday, despite what we saw from the major US indices through this past session. Looking at the landscape to see what we have to inspire the investing masses: the ebb in interest rates has been summarily reversed, earnings have stirred some serious concerns, growth forecasts continue to deflate and other speculative leaders (like Bitcoin) have slipped. It is possible that sentiment is so focused that it overrides all of the fundamental headwinds, but that usually shows through in a collective bid that ‘raises all boats’. We aren’t seeing that at the moment. So what do we make of the S&P 500’s extended 7th consecutive day’s advance and a fresh record high? This looks like a tactical opportunity that traders are taking for granted. The gravity of such a milestone after a 33 trading day reprieve can urge a speculative bid out. However, follow through after the record is booked is a different matter altogether. Without a fresh and significant driver to renew the charge, this index will either chop higher or find itself correcting. 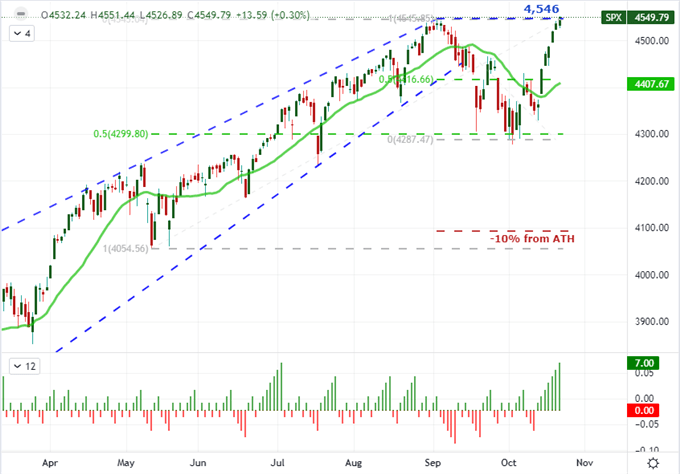 For a different view on ‘risk appetite’, we can run down the list of alternate speculative assets that are in a very different position than the SPX. Emerging markets, junk bonds and carry trade were all lower through this past session specifically. More remarkable for me was the disparity in performance between US and global equities as they are more closely related but for the geographical economics. The ratio of the S&P 500 to the VEU ‘rest of world’ equity ETF charged to a record high this past session, indicating there is a distinct appetite for the sheer momentum the popular index has enjoyed for so long. This looks like a tactical bid for a particular market that has enjoyed a speculative bid rather than the charge of a universally bullish market. Why does it matter? Tactical moves are typically shorter lived than strategic trends. 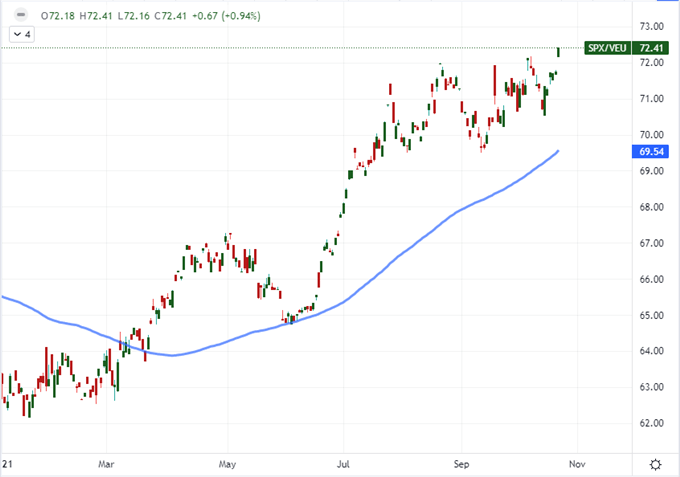 The Troubles for the Top Performers Ahead

One of the first considerations of trouble for the steadfast bid on the span of higher return assets through the final trading session of the week is the notable correction from a few key leaders Thursday. Global indices would not just flag, but actually slide. Drawing a lot of attention in its own right, Bitcoin would also suffer a setback through this past session after storming to a record high above $66,000 just the day before. That does not resign the leading cryptocurrency to a full bear market, but it does undermine the perception of its ready moment. Another area of interest for comparison is the carry via the Yen crosses. EURJPY broke its bull trend after a 10 consecutive trading day advance with most of its counterparts seeing a similar retreat. This was perhaps the strongest ‘risk’ asset that I follow in the ‘short-term’ (over the past few weeks). 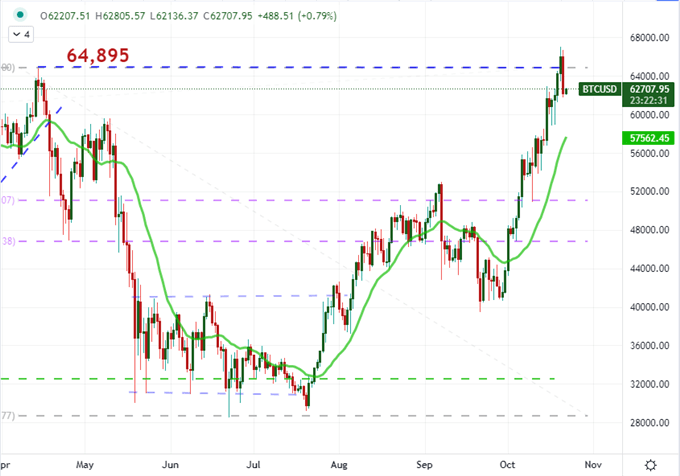 A more traditional and local – for the US – fundamental concern to chew on for the US open on Friday is the troubling stirring around earnings. The top and bottom line beats from Tesla and CSX after hours Wednesday would find the former idle just 0.4 points below its record high and the former retreat after its bullish gap to record territory. A little more threatening is the afterhours performance from Intel and SNAP. The former dropped approximately -7 percent after the official close as the market put greater emphasis on a miss in revenues ($18.10 versus $18.24bln expected) than the beat in EPS ($1.71 vs $1.11). Far more dramatic was social platform SNAP which had a similar mix in numbers (revenues of $1.07 bln fell short of the $1.10 bln forecast), but the stock cratered approximately -25 percent. It seems the market is not willing to spin all updates to a favorable turn. 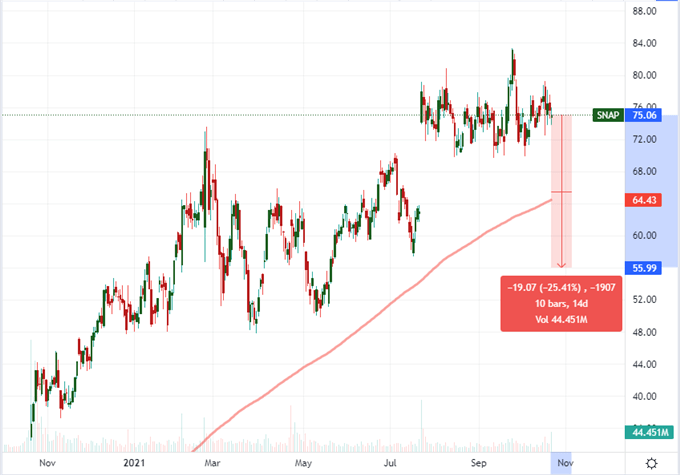 The Fundamentals: Monetary Policy in the Backdrop and GDP in the Foreground

As we head into the final trading day of the week, there are a range of fundamental matters to track. My concerns over the financial and economic health of China have not waned for example. However, the significant change in monetary policy expectations across the board is proving more immediate and tangible. This past session, there were reports from a BOE official to keep speculation of a possible November rate hike warm and swaps are still generously pricing approximately four rate hikes form the BOC over the coming year. That said, the Fed’s own rate forecast was more impressive in its day-to-day about face. After the pullback in implied yield hikes through 2022, the outlook jumped to 43.5 basis points worth of tightening. We are back to pricing in an approximately 75 percent chance of two hikes (and certainty of one). That was enough to give the DXY Dollar Index its first advance in 7 trading days, but the implications in my book are deeper for general risk markets. 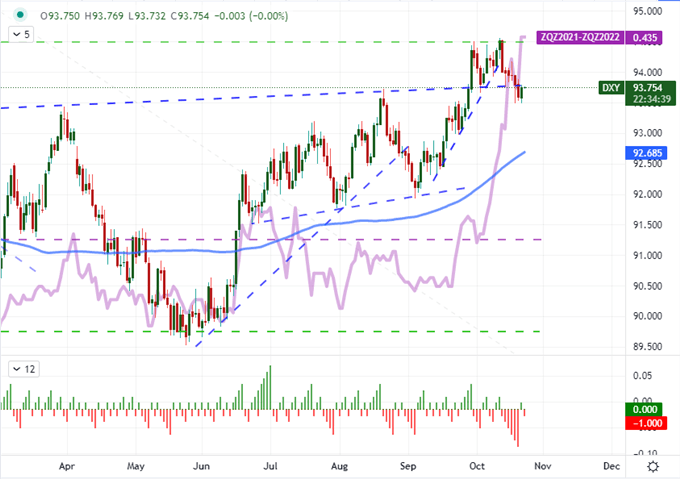 From the developed world to the emerging markets, there was a very explicit monetary policy development to register out of Turkey. Following on the surprise rate cut between meetings back in September, the TCMB unexpectedly slashed its benchmark rate by 200 basis points to 16 percent. That is a natural weight on any currency and the Turkish Lira was no different. Yet, the implications are more than just the natural response to relative value but run even deeper into credibility as the monetary policy attempts to combat inflation nearing 20 percent with rate cuts. 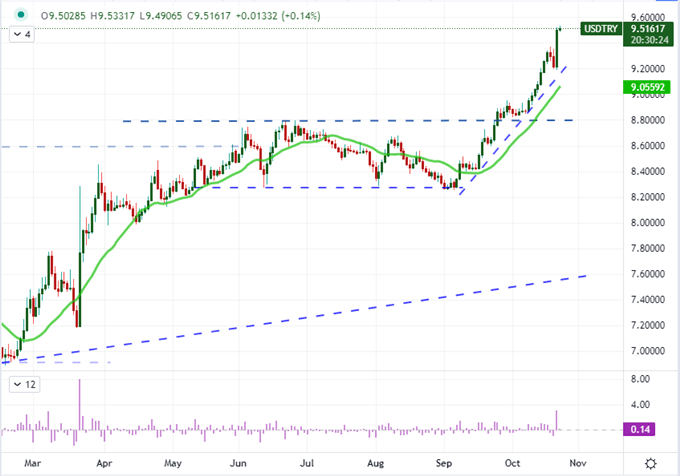 For a fundamental theme with a scheduled release time, Friday’s top listing is the October PMIs. These timely economic updates are due from the Japan, Australia, the UK, Eurozone, France, Germany and the United States. Last month, the data series normalized – Western economies pulling back from their post pandemic highs and Asian economies pulling up from their recent slumps. It is likely that these figures will draw little-to-no interest in terms of market volatility. However, if speculative appetite is already in a charged bullish or bearish move, such data can be ready fuel to significant fires. 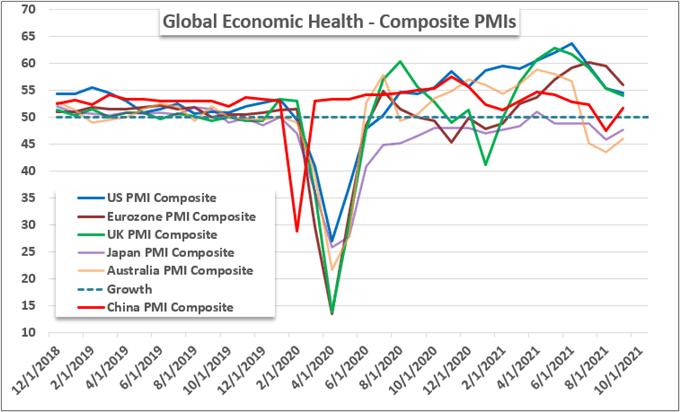