Last week offered up a volatile but inconsistent view on risk appetite, which makes trading conditions ahead an unpredictable affair. Using the S&P 500 as a baseline for the course of sentiment, there was a noteworthy bullish break from tight congestion following a deferment of the US debt ceiling deadline, but there was no enthusiastic follow through to speak of after the fact. While the combined recognition that the debt situation was a punt rather than solution and the September employment statistics were a mixed bag offers plenty of room for skepticism, it is worth recognizing that investors once comfortable with a complacent bid are reticent to buy into the recovery effort. With a trading landscape ahead of us rife with event risk like US CPI and earnings as well as open-ended themes like growth forecasts and monetary policy compass settings, traders would be wise to maintain a healthy sense of caution and keep clear levels in mind. 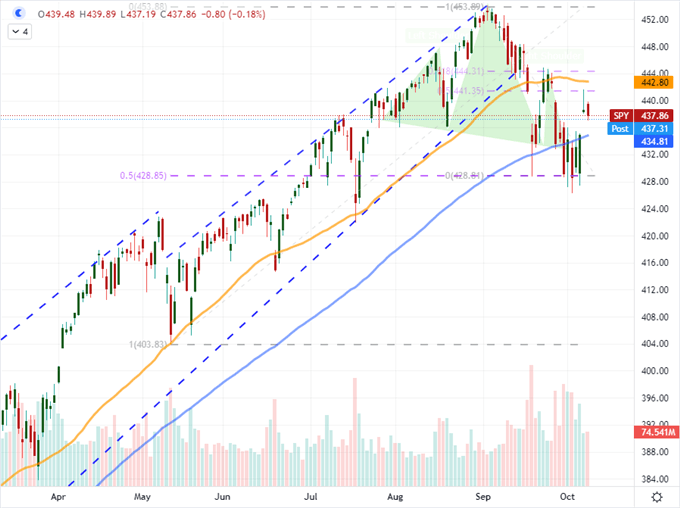 A top event risk from last week that will carry forward a crucial theme into next week and beyond, the September NFPs were a material shock to the downside. The headline payrolls figure for last month fell materially short of forecasts with a 194,000 net increase in new jobs. That was more than a 300,000 miss, but it was still significantly smaller than the previous month’s shortfall. Such a showing could be readily construed as a weak showing for the economy, but speculative interests that have grown reliant on exceptional monetary policy can interpret that outcome as a delay of the Fed’s taper timeline and subsequent interest rate forecast. That seems to be the view of traders that voted in my poll below. Though a remarkably close vote, more than half of those that weighed in believed the weak jobs report would help delay the FOMC from a November 3rd taper.

Poll: Will the Fed Taper at the November 3rd FOMC Meeting After the NFPs Miss? 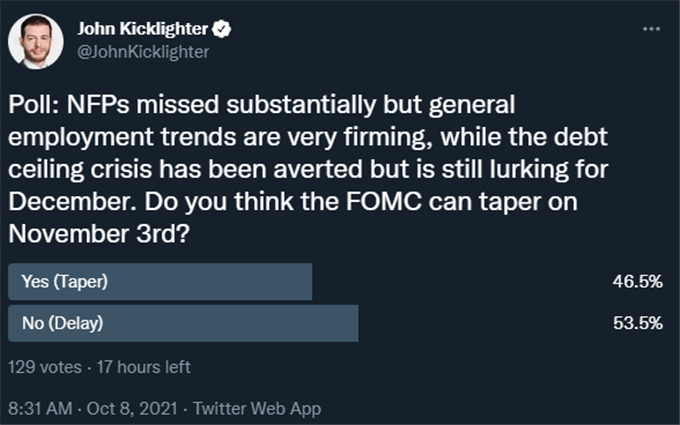 As imposing as the topline jobs report may be among regular traders, the market at large didn’t translate the lower-than-expected payrolls as a signal that the US central bank would have to delay its normalization. In fact, what we seen in some key assets suggests quite the opposite. US 10-year Treasury yields and the implied yield forecast from Fed Funds futures actually charged higher after the labor report on Friday. Looking beyond the NFPs print, we find that overall employment levels grew, the jobless rate dropped and the survey happened to end just before the Delta variant wave started to fade. So, while the data may not have been as robust as some may have hoped for, it doesn’t necessarily delay the taper. In fact, the rate forecasts are now fully pricing in a 25bp hike next year and a modest chance of a second. Notably, that has yet to help the Dollar as its safe haven status and recognition that the debt ceiling pressure returns in a few months caps bulls’ enthusiasm. 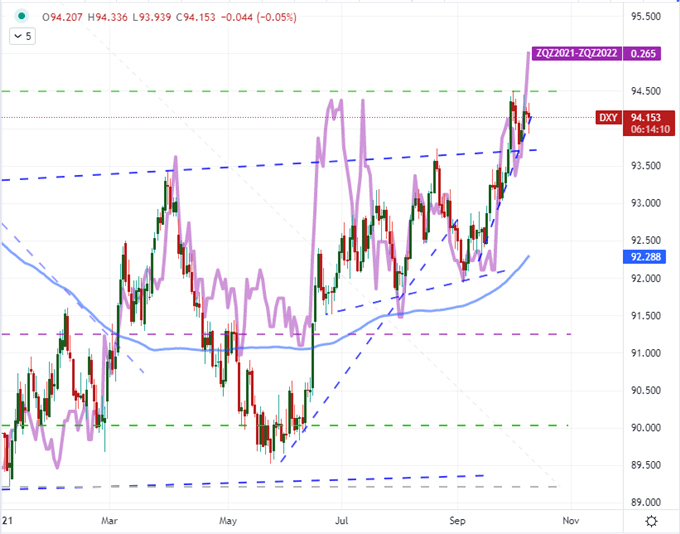 Untangle What Is Important Ahead

Looking out over the week ahead of us, there is quiet a bit of scheduled event risk and latent systemic theme just waiting for a headline to spur greed or fear. Interest rate expectations remains a theme that will be of particular interest for me, but there are plenty of matters that will compete for our attention such as China’s struggle to contain Evergrande’s troubles, the start of US earnings and an updated global health check from the IMF will all carry weight well beyond a single region or asset class. 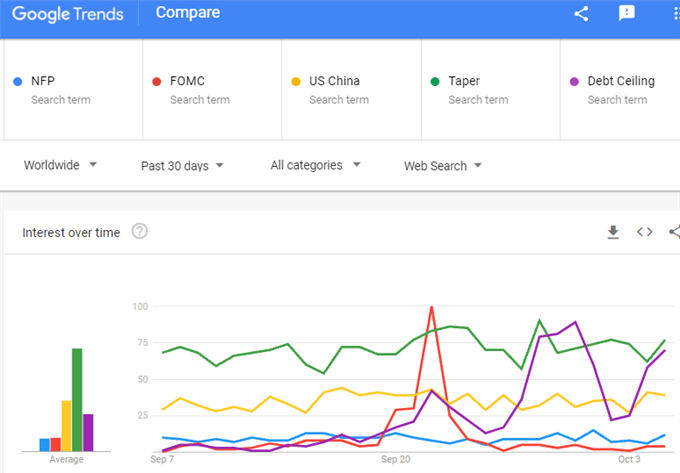 Taking a look at this coming week’s top level event risk, there are a few key fundamental ‘themes’ that should stand out. I will pay close attention to the IMF’s semi-annual update. Of course, most investors will focus exclusively on the World Economic Outlook (WEO) with its updated GDP forecasts for the developed and developing world. This is of course important, but my principal interest will be on the other two reports: the Global Financial Stability Report (GFSR) and the Fiscal Monitor. For the GFSR, the concept of asset bubbles built on the bounty of the world’s largest central banks has started to seep through even the conservative central banks’ warnings. The IMF is far less reserved in its assessment of such things. Then there is the fiscal health check which should draw a clear connection to the recent US debt ceiling debacle. Another general, extended theme to monitor across the calendar is the start of the US earnings season. As usual, the big banks will be the market cap heavy weights on tap, but I find more macro relevance to the likes of Alcoa and TSM which speak to supply chain struggles and geopolitical tensions. 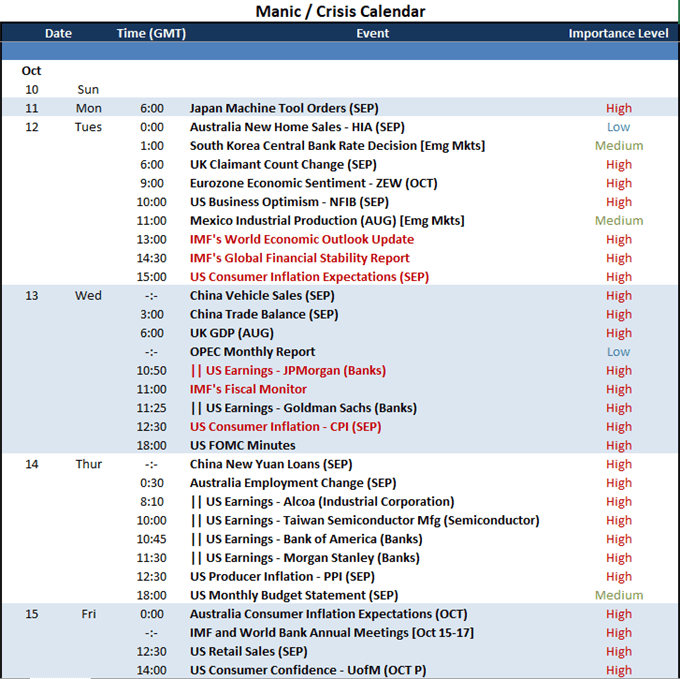 Monetary policy is another theme that has some scheduled event risk to grab onto in the coming week’s docket. While I will be watching the UK GDP (and other monthly data), Australian employment and Eurozone economic sentiment survey among other data for guidelines on relative policy stance; I am most interested in the US data that will connect back to Fed intent. Following on the employment report of this past week, we will round out the dual mandate for the FOMC with the US CPI release Wednesday and the consumer inflation expectations report from the NY Fed the day before. 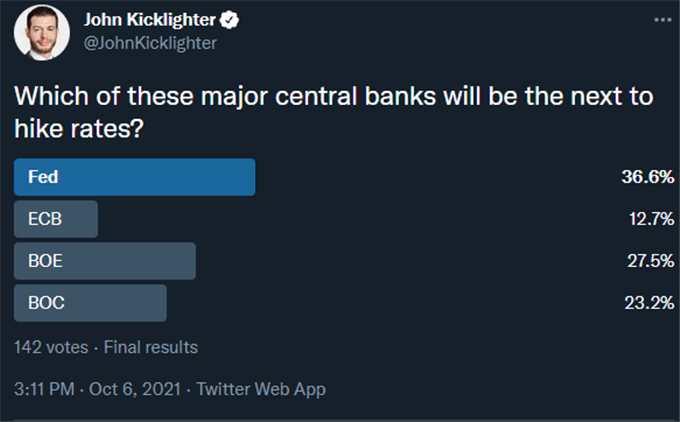 While there are key events on the economic docket which will make for convenient tracking of potential volatility, there is still substantial potential for swells in activity that don’t come with a convenient time stamp. Once area that I believe is in the backdrop for many that has significant capacity to come quickly to the lead of global fear is the situation in China. After an extended holiday closure, the country’s markets will come back on line fully this week, and with the liquidity the recognition that Evergrande is not just unresolved but showing contagion to the country’s real estate market will either grab the investors’ attention or their imagination – I don’t know which would be worst. Further, the rise in commodity prices continues to exact significant pressure on China’s economic potential which could in turn spill over to USDCNH (one of my top 4Q opportunities) as a pressure relief valve. 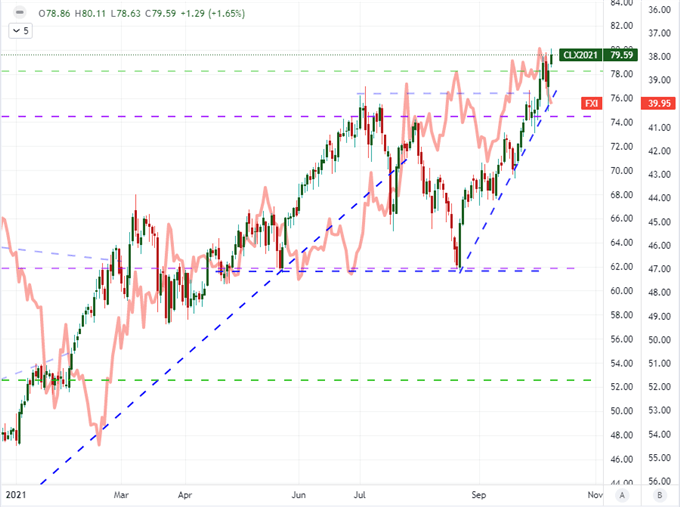 One of the most consistent ‘black swan’ risks in the financial markets is regulation. It can come out of the blue and its influence is unassailable. The crypto market was confronted with another possible existential risk in this vein just around Friday’s market exchange close when it was reported the White House was considering an executive order as a means to establish regulation in the cryptocurrency market. While Bitcoin and other major currencies eased after the news, it was far from a panicked flight. With regulatory crackdown in countries like China and pressure around the energy hungry mining environmental influence failing to curb bullish interest; it seems confidence is solidifying that this market is undeniable. 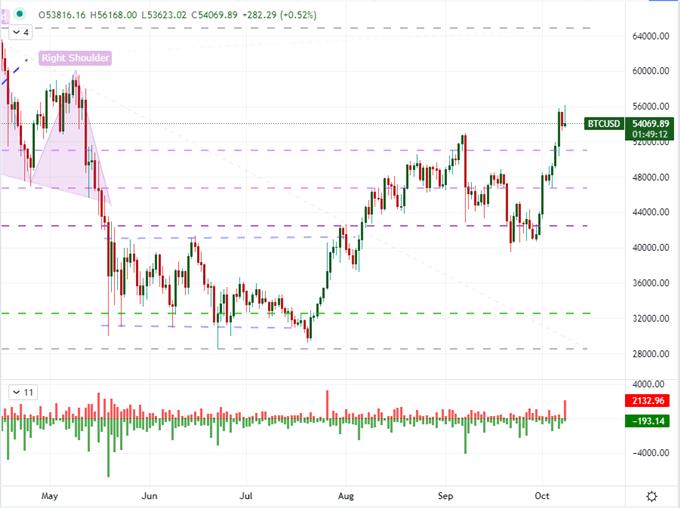