S&P 500 Reversal and Dollar Rally Stall Before Conviction Sets In – What’s Next?

A Breakdown That Wouldn’t Catch

How many false starts have we seen in the markets these past months. Both promises of an accelerated bullish view of risk markets and the amplified threat of a sentiment reversal have fallen far short the traction that traders have been seeking. On the one hand, this consistency can be viewed as a relief; but for myself and many others, it is more a frustration. There are serious and systemically-important fundamental issues at play in the global financial system, yet the market is reticent to play out the expected adjustments. Rather than reflect a market that is impervious to fundamentals, I see this as a situation in which the pressure continues to build until the control of the complacent is broken to volatile results. We have plenty of serious issues that will carry forward into the coming week that need to be tracked. The risks of Chinese financial struggle, recognition of a normalizing monetary policy backdrop and the existential threat of a US sovereign default will haunt the hopeful in the week ahead as technicals continue to stir nightmares and event risk threatens to trigger panic. 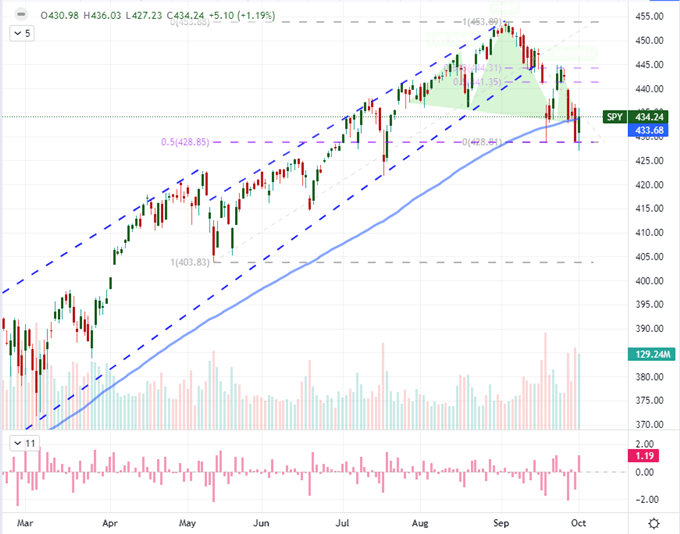 Through this past week, we had a contrast in the performance of risk assets as it reflects on intent. On the one hand, the week itself registered an unmistakable slump in market sentiment, but Friday’s trading session held back the tide of a full-blown deleveraging wave. For the S&P 500, this was manifest in the technical picture of a head-and-shoulders progression that would also see a close below the 100-day moving average through Thursday’s close. Yet, right on the cusp of a full bearish shift, the bulls managed to muster a recovery rally that pushed the index back above the aforementioned technical boundary and quiet the eager bears. While I would certainly say the US indices were painting a provocative picture this past week, there remains a problem in the lack of consistency in risk-directed assets. While there will always be a leader in the broader trends across the global financial system, it is more likely that outlier moves that don’t muster the support of ‘fear’ in peer assets and regions are more likely to falter. In other words, before I buy into a true trend moving forward, I want to see a broad ‘risk’ move. 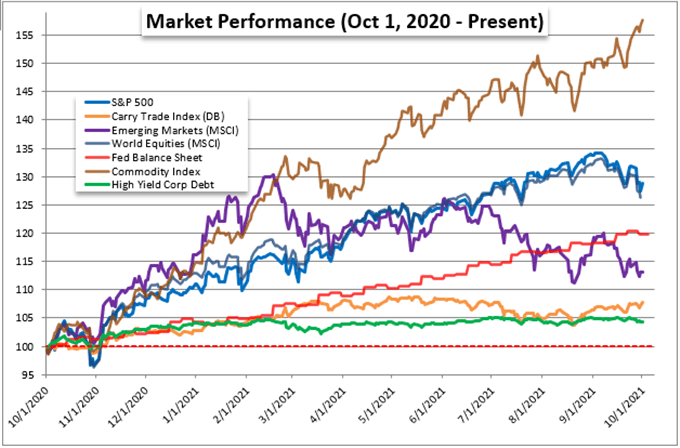 What Should We Expect to Drive the Markets

As I look out over the coming week, there is plenty of scheduled event risk and three open-ended fundamental themes that can readily generate volatility or take overall control with the proper motivation. However, a combination of overlapping influence and the disruption inherent in anticipation (as in waiting until Friday NFPs) can create difficulty in following a clear bead in fundamental analysis. That said, a more rudimentary market aspect may step in to direct the financial system amid the confusion. This past week mustered closes that lived up to seasonal expectations. September marked the first bearish close for the S&P 500 in 8 months while the same benchmark slipped -2.2 percent on the week itself. This aligns nicely to the seasonal expectations I’ve referenced so often. If we were to go by those same statistics moving forward, the 40th week of the year averages a modest gain while the month of October is solidly positive for the index. Of course, these are averages with highs and lows marked over the years. That said, market participants find their guidance in different areas. 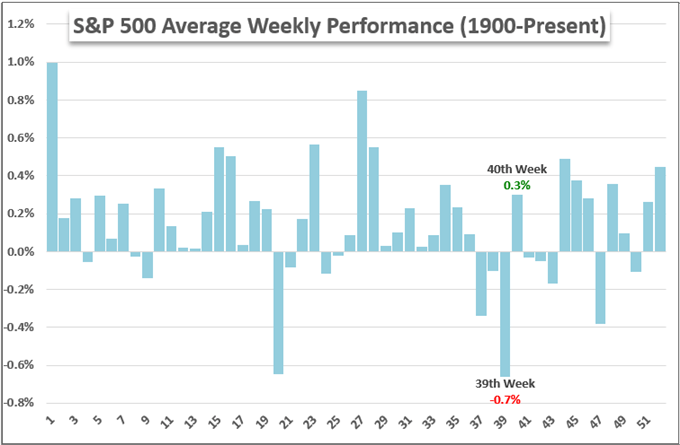 While the ongoing issues with the US fiscal situation and data related to monetary policy are likely to keep these two systemic matters front and center over the coming week, I want to raise an open-ended risk that has not been resolved even if it has fallen out of top headlines. Chinese property developer Evergrande is missed multiple payments on its debt over these past few weeks and is thereby in a grace period. Thus far, the government has not resolved the issue and made customers/investors whole; but I still do not believe the CCP will allow for a systemic crisis. That said, the issues are not isolated to a single company. Excess lending and shadow banking exposure are deeper and more opaque problems. That is further compounded by energy shortages and the government’s efforts to crackdown on Western world issues. Adding further to the cornucopia of trouble for Chinese assets and the Yuan, the USTR (US Trade Representative office) announced Friday evening that the country was not living up to the Phase 1 trade deal and the government was considering actions. It should be said, USDCNH is one of my favorite opportunities for the fourth quarter. 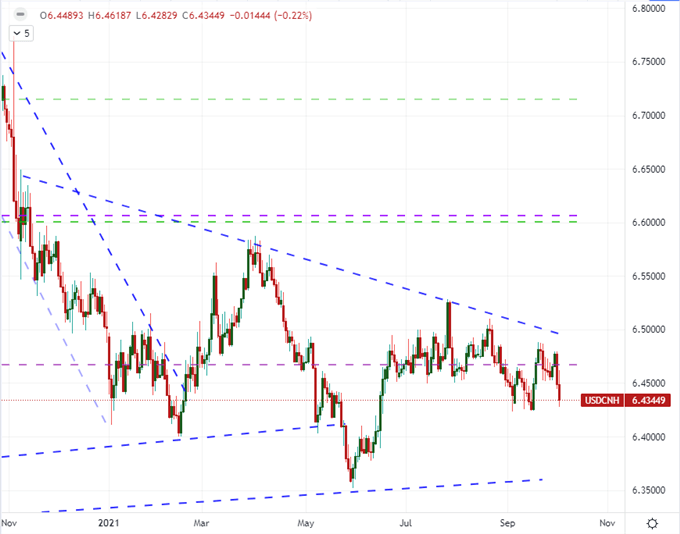 Aside from the lingering threats of Chinese contagion – which will necessarily escalate ‘out of the blue’ given the government’s opacity – the ongoing battle to resolve the US debt ceiling and the slow turn in extremely accommodative monetary policy will remain irritating threats. For the US financial situation, the government managed to avoid a shutdown with a stopgap bill that covers spending through December 6th, but that doesn’t resolve the deficit ceiling which Treasury Secretary Yellen warned will be a hit by October 16. I still believe a default is a very low probability, even an accident, but a rating agency downgrade for the brinkmanship should be considered a possibility. The fallout form this would be extreme which more than offsets any relief sought in probability. 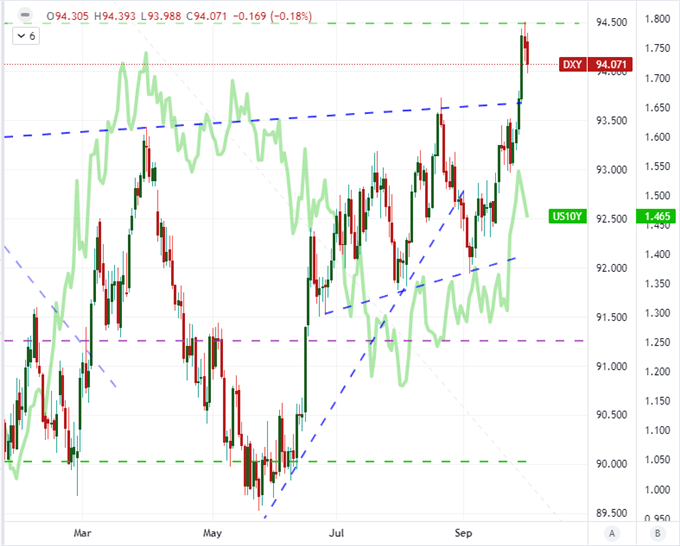 A more active fundamental theme for the coming week given the docket items is global monetary policy. I think it is clear that the current is starting to shift away from the extreme accommodation that built up after the pandemic and only a serious threat on the horizon is likely to pull us back form that normalization. In either event, I don’t see monetary policy supporting the bulls much further. From the likes of the Fed and ECB, there are central bank speeches due which could help carry us through to the next meetings. For outright rate decisions, the RBA and RBNZ decisions are clearly designated on the calendar. The former is debating its tone and whether it wants to project a further taper mentality. The latter is fully expected to hike its benchmark rate by 25 basis points – though the Kiwi dollar hardly seems impressed by the notion. 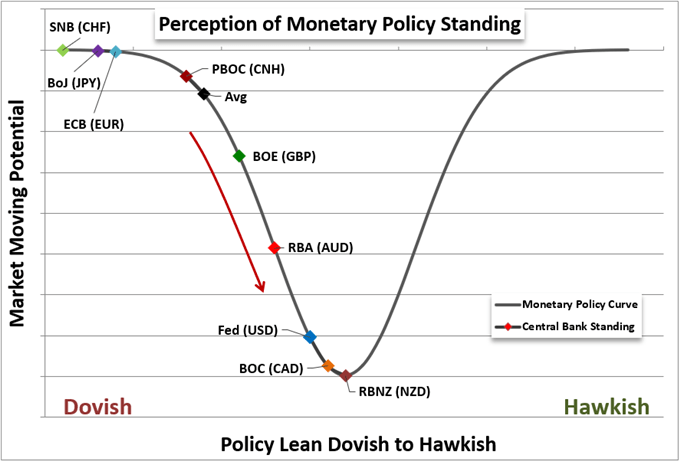 For individual pieces of event risk, there is a fairly dense calendar to contemplate. While there are many data points which should be tracked, there are certain indicators which deserve a closer look than others. In particular, the US and Dollar are the most beset. While there are sentiment and trade indicators as well as Fed speak, my attention will be honed on the September ISM service sector report and Friday NFPs. The former is a strong proxy for US GDP (service jobs and output are a vast majority of the US employment and growth) and the latter is one of the Fed’s dual mandates. A systemic impact is possible, but these updates are more potent for volatility potential. 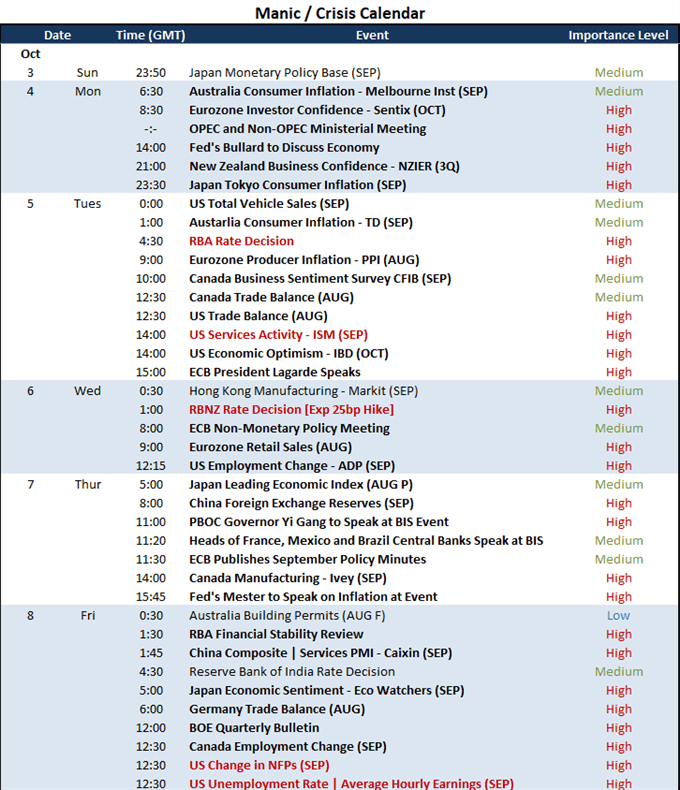