A Serious Bearish Shift in the Markets or Temporary Seasonal Adjustment?

We were delivered some seriously provocative technical breaks this past session. On the capital market side, the S&P 500 closed below its 100-day moving average and perhaps the neckline on a head-and-shoulders patten for the first time since October 30th. Meanwhile, in the FX world, the benchmark EURUSD closed below 1.1600 for the fist time since July of last year. From a technician’s perspective, these moves represent a remarkable transition in bearing – bullish to bearish trend in the former case and congestion to bearish in the latter. There is plenty of fundamental charge that has built up over the past few months in particular, but that doesn’t necessarily secure the market’s wholesale transition given years of engrained comfortable expectation. When it comes to the SPX’s intent, my concern is a lack of intention from other ‘risk’ assets. Meanwhile, EURUSD’s liquidity raises the bar for trend development, and even other Dollar majors were refusing to confirm. 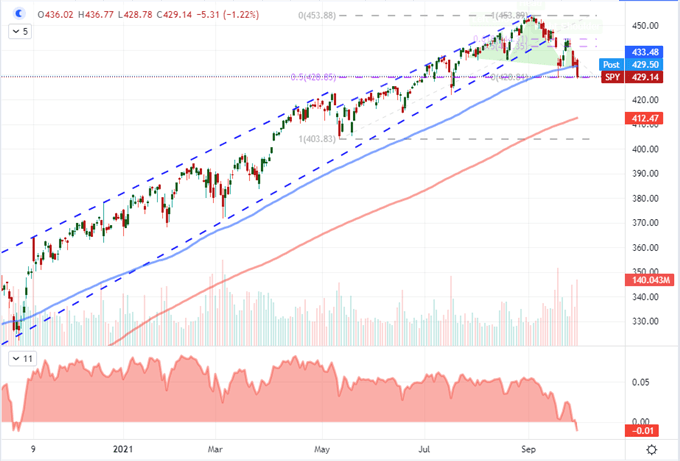 In memoriam of September, we registered the most significant shift in an otherwise complacent bull trend since the worst of the pandemic in March of 2020. Besides the threatening technical reversal pattern registered on the daily chart, the S&P 500 posted its first bearish close in 10 months – ending the most consistent stretch since the run through 2017 and into the open of 2018. Furthermore, the month’s -4.8 percent was a significant blow and comparable to numerous one-off swoons of this magnitude over the past decade. In fact, there was only one instance of a significant follow through on a monthly bearish drop of this scale in the 10 years and that was during the height of the pandemic (February-March of 2020), which I think most would agree had a strong and active driver at the wheel. 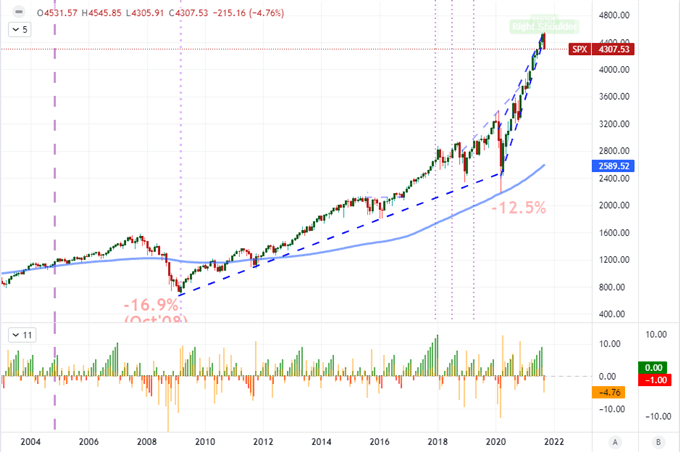 I think it is no small matter that the S&P 500 managed to finally break the 100-day moving average that has tracked as a floor for bulls for so long on the day that the month and quarter closed. There are well known rebalancing flows that occur for funds that occur on these seasonal milestones. Given how long the market has been and with the unfavorable performance through September, to see an adjustment that reduces risk for tax purposes is not at all unusual. That said, this is not traditionally a reliable catalyst to an ‘open field’ trend development. Friday will tell us how much immediate momentum is at hand; but overall, the month of October is known to be the calendar year’s most volatile month but it does historically average a three-month stretch of gains for the index averaged out over the past four decades. 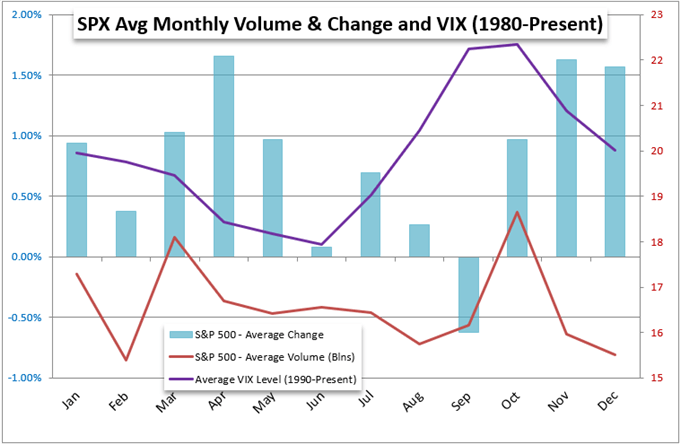 A Dubious View on an Otherwise Impressive Dollar

The Greenback has clearly broken free of a multi-month stretch of broad range. That can be true and still not set the foundation for a reliable trend. On the fundamental side, there are a number of reasons to anchor a bullish perspective from its safe haven appeal amid risk aversion, the Fed’s unrelenting messaging for an upcoming taper and at least the immediate relief from the impending government shutdown. Ultimately, only that last aspect – which is cold comfort when the Yellen-stated October 18th deadline for the debt ceiling being hit is still unresolved – is a timely matter. For the safe haven drive, I would note that few other benchmarks for fear have shown remarkable traction in an unwind. And, while we have Fed members like Chairman Powell and Atlanta Fed President Bostic keeping to a ‘taper coming’ script; there isn’t nearly as much urgency in adjusting for that speculation. So, while there are fundamental points of bullish support, there isn’t a driving need to adjust now. 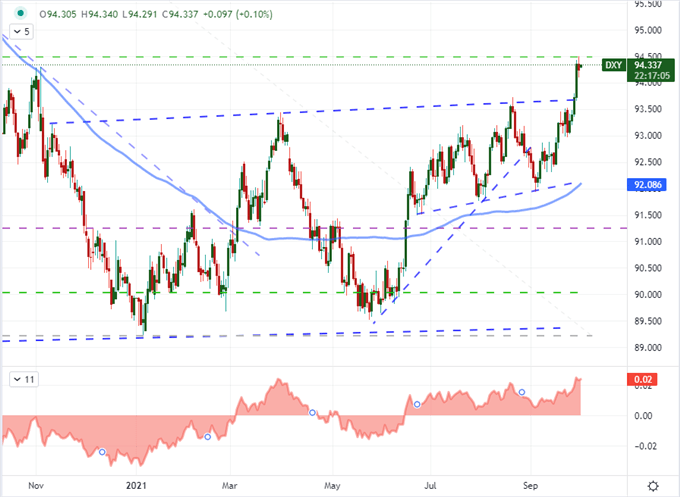 If there is any anchor for the Greenback, it would naturally be EURUSD. And, this pair posted an extended slide this past session further clearing out a confluence of support in a well-worn 1.1600 support. That is no small feat as it adds to the perspective that we are leaving behind months of congestion. However, the Dollar notably struggled and retreated with pairs like GBPUSD, USDJPY and AUDUSD. We could say that this is the liquid exception, but more earnest is that the Euro just suffered a bigger decline on the day than its US counterpart. We would see this show through on pairs like EURGBP, EURJPY and EURCHF. The Euro’s weakness could very well usher this benchmark pair lower, but it is a far less convincing motivator. 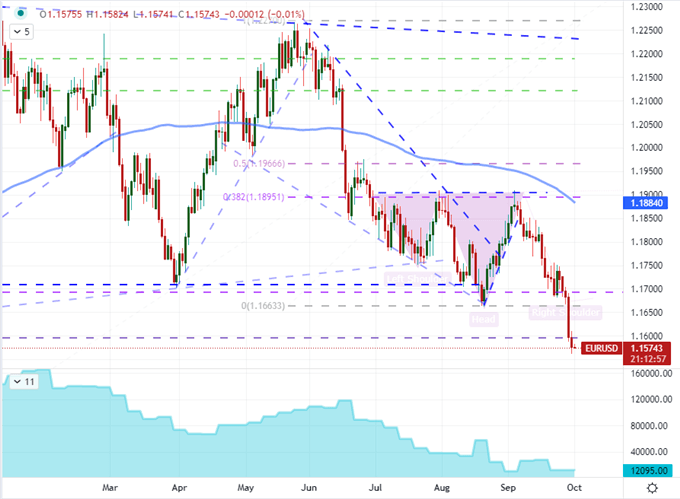 A Busy but Unmoored Friday for Event Risk

With risk appetite and the Dollar seemingly already one step into a critical transition, it would be useful to find something with clout offer a meaningful fundamental shove to keep things moving. There are quite a few noteworthy events scheduled through the 24 hour period. Japanese and Mexican consumer confidence, Canadian monthly GDP and German retail sales are all updates capable of generating localized volatility. Looking for a little more impact potential, the Eurozone’s CPI can work on an already active currency and perhaps stir up the lower end of the global monetary policy curve depending on the outcome. For both depth and scale, the US docket is top billing. While I will mark the NY Fed’s 3Q GDP forecast update (the official figure is due October 28th), ISM manufacturing report and Fed speak; the it is the central bank’s favorite inflation indicator (PCE deflator) that can offer the most definitive steer. 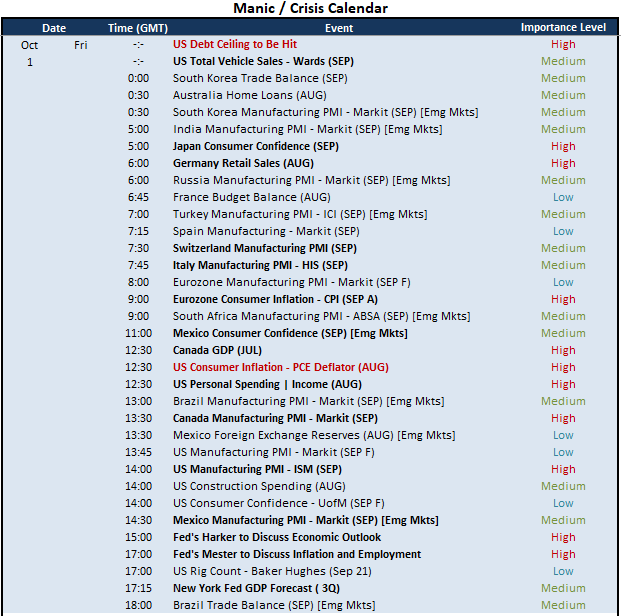 If the PCE deflator holds to its oppressive highs – or advances even further – the further contribution to hawkish interest rate expectations can cater to the Greenback’s prevailing strength. While not the cleanest reflection of the Dollar strength or weakness, a pair I will be watching particularly closely Friday and beyond is USDJPY. There are numerous overlapping fundamental influences at play with this cross. As a measure of risk trends, there is carry element that favors the Dollar in clear risk appetite, the Yen benefits from moderate risk aversion but outright fear reverts to a demand for the more liquid currency. The evolving outlook for US rate forecasts adds another dimension of complexity of course as does debate over the internal risk to the Greenback of a possible debt ceiling breach. This registers for me as a better ‘signal’ as to what the markets are focusing on rather than a trade candidate. That said, retail FX traders (at IG) have traded against the breakout aggressively. 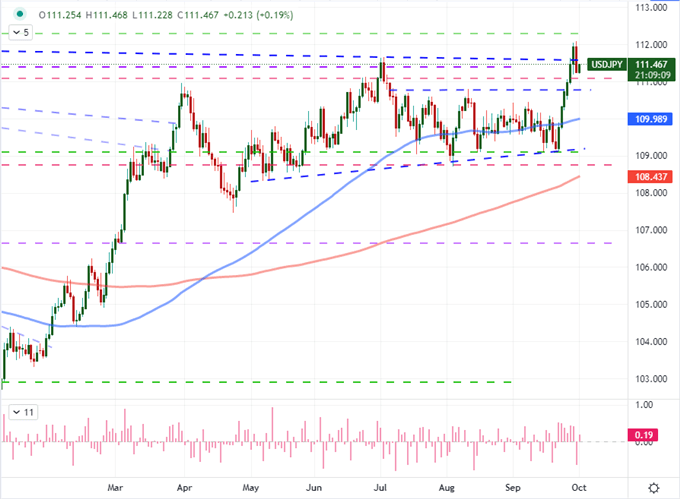