Though we have seen the market’s focus blur around the Evergrande troubles in China and even the more recent monetary policy headlines thin out, the markets have still been put under serious pressure for a risk reversal heading into Wednesday trade. It has been a while since we have seen politicking around the US debt ceiling take the reins on global sentiment, but that was certainly the case this past session. My preferred one-look measure for risk appetite – the S&P 500 – moved into a serious technical position this past session. The index put in for its worst single-day slide (-2.0 percent) in over four months and in turn sidled up to an overlapping support. The 100-day moving average and a ‘neckline’ support on a head-and-shoulders pattern falls around 4,345. A zone of support may stretch down to the month’s previous swing low and midpoint of the past five-months’ range at 4,285, but the pressure is clear. 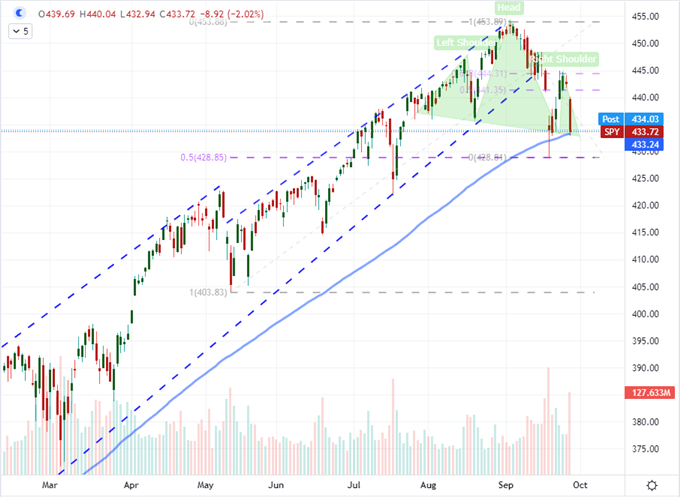 The difference between an SPX break and a full sentiment reversal is a vast one. The former can clear its floor without the latter ever throwing in its support. That would be an effective way to draw all of the momentum out of a nascent trend and thereby represent another failed turn upon which the opportunist dip-buying bulls will no doubt sniff out. Gauging conviction is best done through a high correlation across otherwise loosely related ‘risk’ benchmarks. However, for a shortcut, Paul Robinson and I were talking about the merits of the Russell 2000 as a backup given its 2021 consolidation as a broader index. There are other measures I will watch like the ongoing reversal of the Nasdaq to Dow (growth to value) ratio, but my preference is still the degree of correlation and intensity across the different asset benchmarks. 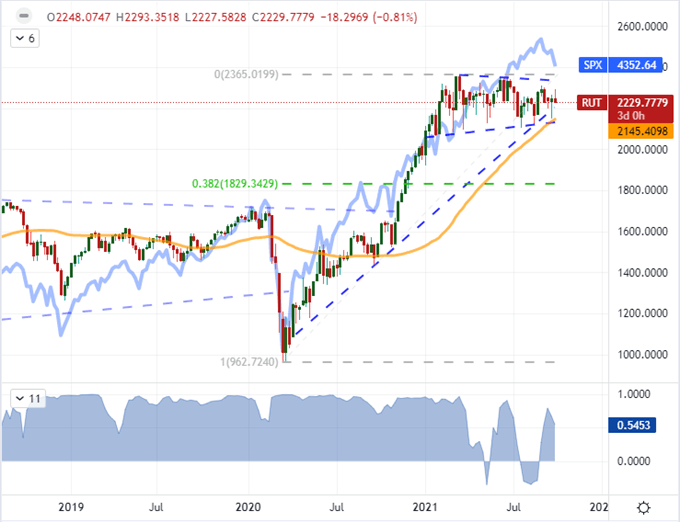 While the density of headlines this past session has shifted in favor of the US debt ceiling risk, that doesn’t mean the matters of the past two weeks have simply disappeared. The reality is that we are just adding threats that could individually trigger a slump in market sentiment – or can collective drive the market to read into the threats of each and all of these matters. The situation surrounding Evergrande, China’s second largest property developer, has certainly not been resolved. There are varying stories about its current financial status and support by the government, but that is unlikely to be the lingering concern. Instead, scrutiny around the country’s financial and economic health will likely deepen. Wednesday evening / Thursday morning, we are due the Chinese government’s September PMIs. Markets question the veracity of the data, but we will see just how willing the market is to interpret underlying problems. 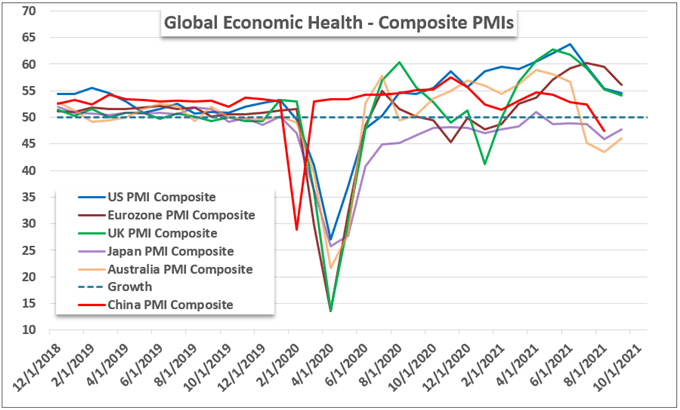 Another fundamental theme that continues to bubble beneath the surface is monetary policy. The Fed’s intentions remain a key concern following a run of somewhat-hawkish speak from known dovish members Monday balanced by the announced retirement of two hawks. This past session, the commentary didn’t really raise to the level of significant policy shifting, but there was plenty of drama in Washington DC where Senators questioned Fed Chairman Powell and Treasury Secretary Jerome Powell. Ahead, Wednesday brings another round of scheduled speeches, but the top event in this vein will be the panel that brings together the Fed’s Powell, ECB’s Lagarde, BOE’s Bailey and BOJ’s Kuroda. 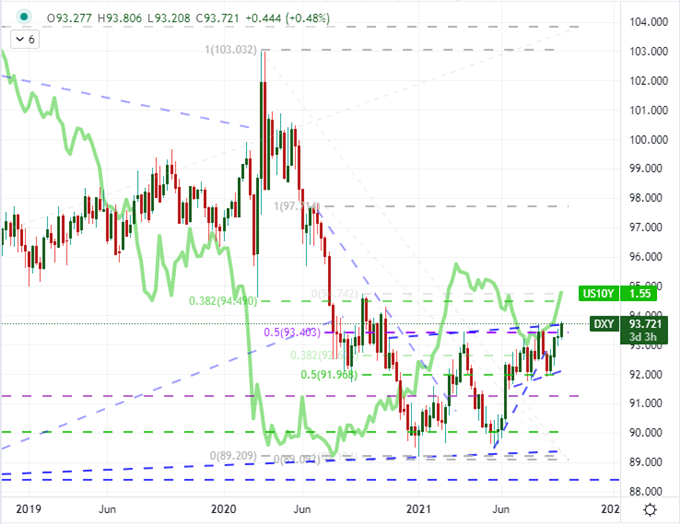 What could draw our attention away from a fluid monetary policy situation and Chinese financial threat all while market’s are under serious pressure? According to Treasury Secretary Janet Yellen, the country will run out of cash to pay its bills by October 18th. That is a shorter window for a debt crisis than was previously expected. It is still a very unlikely occurrence where the US government will allow for a default as the crisis would be a severe one for the United States. However, the risk is not limited to an actual default. Credit rating agencies deciding to downgrade the country’s sovereign credit rating because of the brinkmanship is the more probable – but still extremely serious – scenario. It has already happened back in 2011. It is this fear that has added to the risk aversion of the S&P 500, but it has yet to throw off the Dollar’s safe haven status which is unusual. The DXY Dollar index is trading at an 11 month high, but EURUSD has not broken its range support at 1.1650. GBPUSD on the other hand has sheered through a massive support level in the head-and-shoulders pattern it has developed for almost the entire year.

Chart of GBPUSD with 100-Day SMA(Daily) 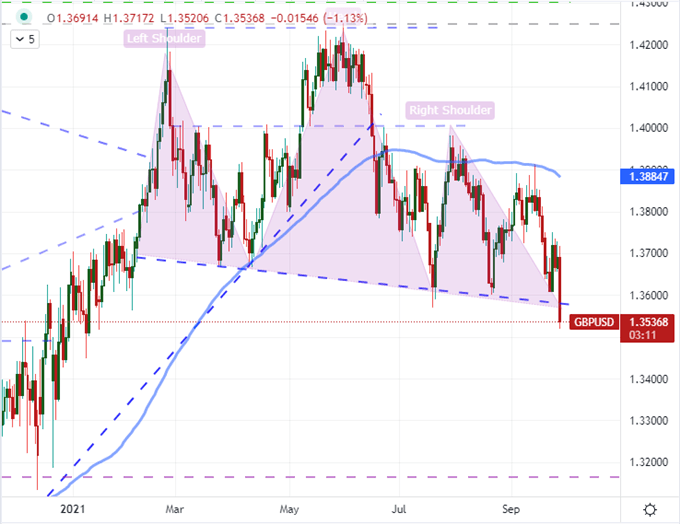 As remarkable as the Cable’s technical pattern is, USDJPY’s setup is even more interesting in my book. The pair has not resolved to break in the Dollar’s favor which aligns to the reality of the underlying fundamentals. However, a multi-year range resistance is overhead. The more interesting consideration for this pair is the different fundamental themes it represents. This is a carry trade in favor of the Greenback, but its safe haven picture is a unique one. A moderate risk aversion usually favors the Yen while an intense one finds capital moving to the liquidity of the Greenback. Yet, what is the calculus for a financial threat that seems to imitate from the US? Even if this is not a trade consideration for someone, it can offer critical insight to what is topping market interests. 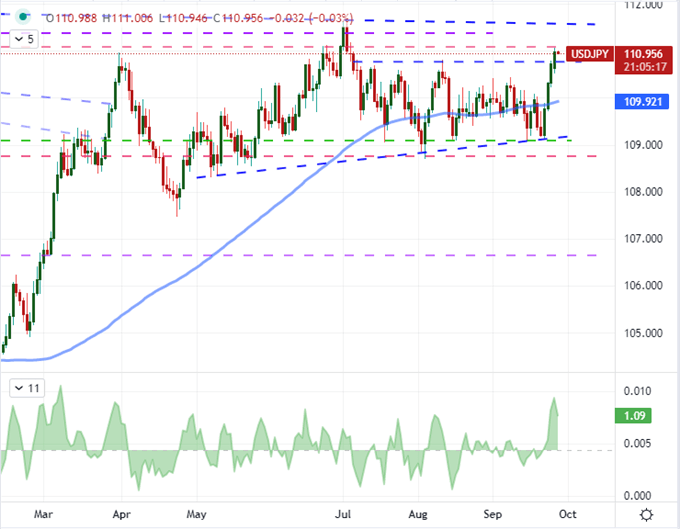 Taking a look at how retail FX traders see the USDJPY’s conundrum, it seems to be an expectation that technicals and the general aversion to fully-fledged trends holds fast. The net positioning among this crowd has surged to more than 70 percent of those with positions short, fading the rally back to early July highs. The retail crowd is good at trading ranges, but not good with breakouts and trends. 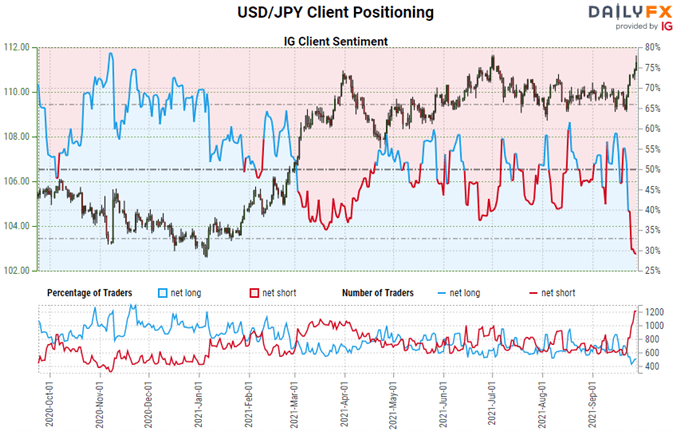