A Remarkable Reversal for the S&P 500 and Risk

This past week opened to an incredible gap lower for the S&P 500 and its peers founded on the uncertainties surrounding Chinese property developer Evergrande. The metaphorical fuse was lit and a full reversal of risk trends could have been pursued with the backing of seasonal expectations and compounding systemic issues (such as the moderation of growth and stimulus). Alas, after the initial gap lower, the market spent the rest of the week in recovery mode – despite reinforcement in expecting a slowing economic outlook and forecast from the Fed of an impending taper – that would ultimately fully reverse the lost ground. For the US index, the ‘former support as new resistance’ scenario was diminished by an official close above the 50-day moving average. That said, traders should remain skeptical about what the next move will entail given the clear struggle for conviction. In the week ahead, there are is no single even that will act as decisive catalyst (and anchor in the lead up) for the entire market. That may allow for a more productive evolution for markets. 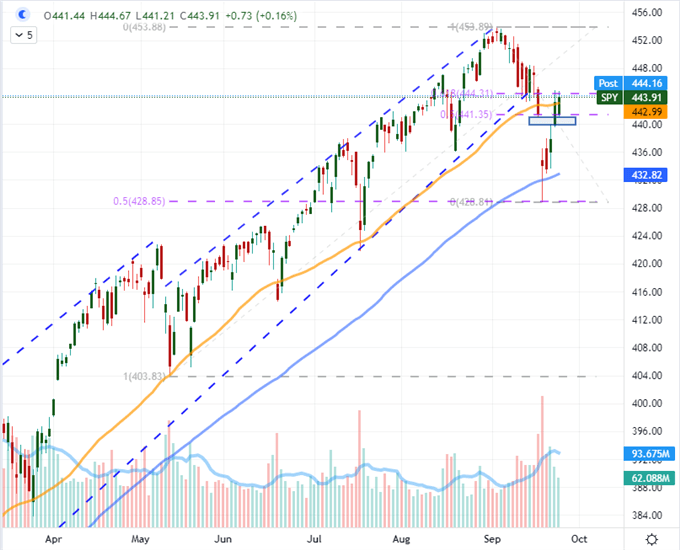 Shifting the time frame for the same S&P 500 chart, I want to point out a few considerations on the grander scale. The bullish reversal we experienced through the week was exceptional enough to produce a 97 point lower wick. That is very large, but it isn’t exactly a record breaker for this bullish-oriented index. We have seen a disproportionate scale of lower wicks over the past 18 months versus the upper counterparts. That perhaps isn’t that surprising giving the overall trend of the market over this period; but it speaks to the drive to keep this prevailing run in gear. In contrast, the weekly chart helps to reinforce how meaningful the technical break was for the remarkable bullish channel. The post-pandemic drive was an unmistakable acceleration for an already-decade-long bull run. A confirmation and progressive reversal on a scale of this magnitude will take time commensurate with the time frame, but it is a potential worth tracking. 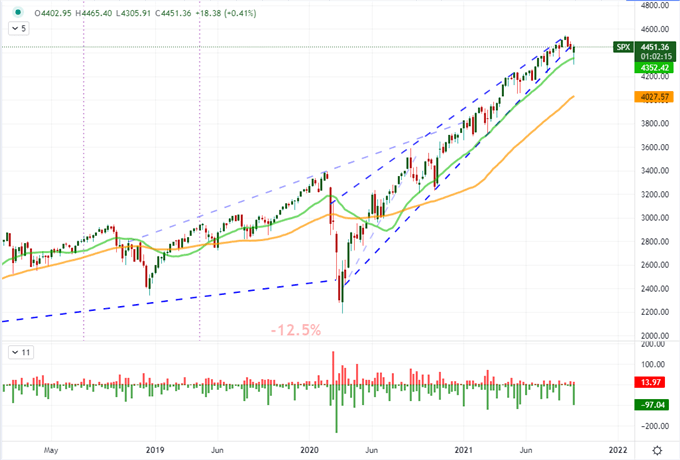 With the coming week, we will close out the month of September. This is occasion to consider the seasonal expectations that have exerted pretty clear influence over the financial system over the years. Using the S&P 500 as the baseline, September is the only month of the calendar year that has averaged a loss over the past 40 years. As it stands, the index is still in the red; and we would need to extend the recovery all the way to 4,523 (just off the record high) to close out the month in the green. That would be a serious feat in this environment given the market’s fundamental struggles of late. On a weekly basis, the expectations for this coming week are even more distinct. Historically speaking (in 120 years of data), the 39th week of the year averages the worst overall performance of the calendar year. This is of course an average, but the sample size says this statistic should not simply be ignored. 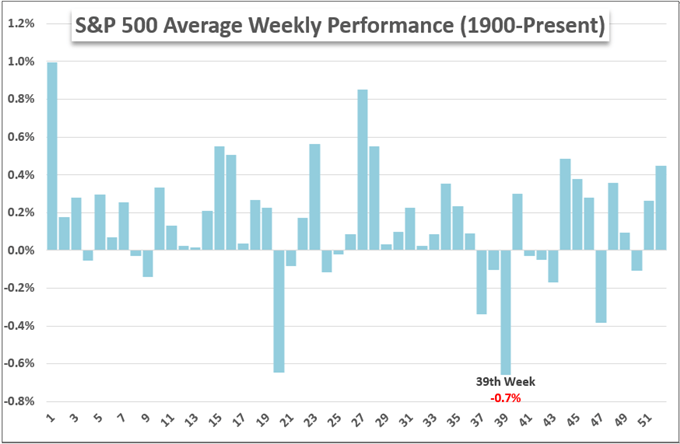 In the aftermath of the FOMC’s taper warning, it would seem the Dollar is in prime position to gain serious traction and force a long overdue breakout. I am not going to front run the move however as the market’s collective focus is far more unpredictable than the fundamental developments themselves. That said, the expectations for a taper announcement in early November are clearly strong from measures like the US 10-year Treasury yield. Further, interest rate expectations through 2022 are still sporting speculation for a hike according to Fed Funds futures on the 9-9 split registered in the SEP. The Dollar’s potential should be considered seriously between the relative yield advantage and its latent safe haven status. However, I am not going to throw in my full conviction until the DXY clears 93.75. 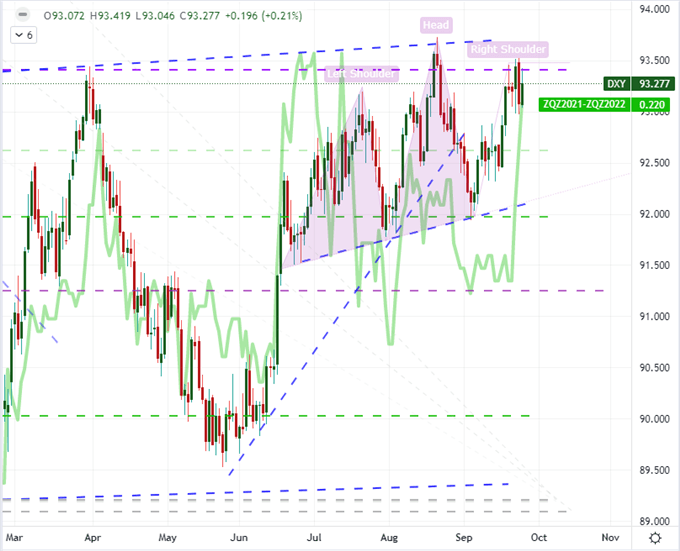 Speaking of monetary policy, I believe these frequent theme will continue to exact its influence over the financial system into the coming trading week. We are seriously lacking for the same scale of central bank deliberation that we enjoyed this past week. The only major central bank due to announce a policy update ahead is the Mexican policy group. While a noteworthy even for USDMXN, there isn’t much of a global influence – even to the collective EM policy view. For the developed world’s monetary policy balance, I will be watching data and speeches that happen to speak to rate forecasting. For data, the top listing on my docket is the Federal Reserve’s favorite inflation indicator, the PCE deflator, due Friday. For general event, however, the ECB’s central bank forum will bring together heads of the Fed, ECB, BOE and BOJ on Wednesday; which should give some very interesting insight from a group that spans the scale of hawkish to dovish. 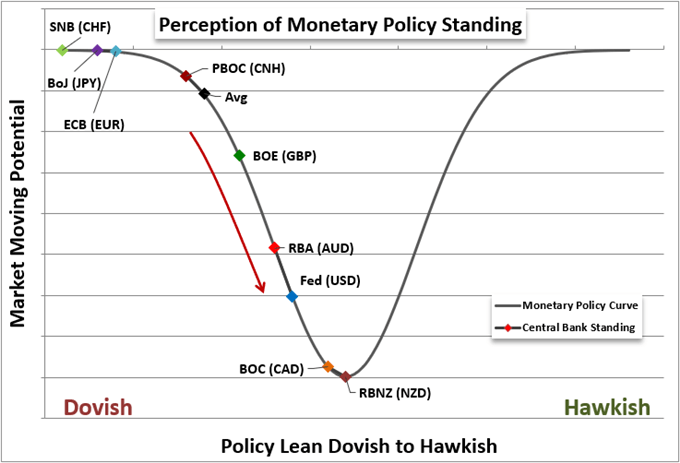 Looking out over the coming week, there are some serious fundamental tide changes that can lead to systemic changes for risk assets, though the potential runs much deeper for Dollar-based crosses. I will be watching EURUSD for its own trade appeal, but it also carries with it the weigh of a systemic leader. While the medium-term fundamentals of yield potential and risk lean support a 1.1650 break (sans a sentiment move founded on a US debt ceiling breach), a commitment for a bearish break would take serious conviction. In turn, a path-of-least-resistance view for the pair is a ‘neckline’ break of the inverse head-and-shoulders pattern from this past week that stands at 1.1750. 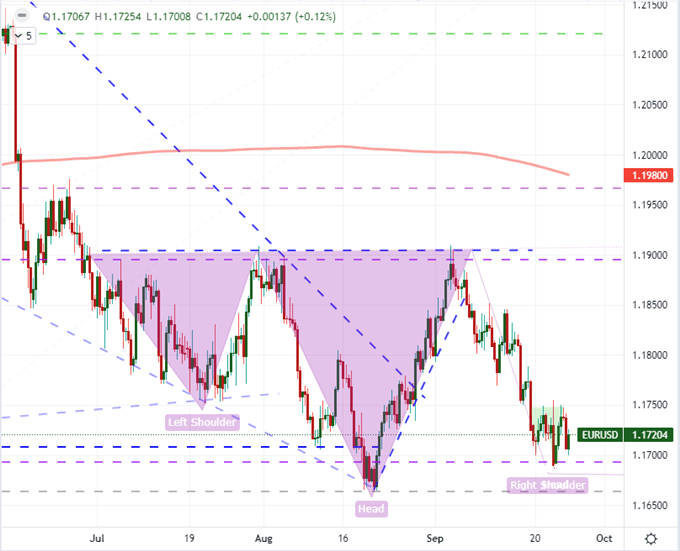 Another path-of-least-resistance skew can be found in USDJPY. There is once again a yield forecast skew here that supports a bullish drive. A risk appetite influence would actually reinforce the bulls as well, which gives an additional scenario leg up here relative to EURUSD. Nonetheless, a 30-day trading range for USDJPY represents the tightest trading band for one of the most liquid assets in the world. I will be on high alert for interim breaks here, but full-fledged trends would require clearing outer technical boundaries that we haven’t even approached yet. 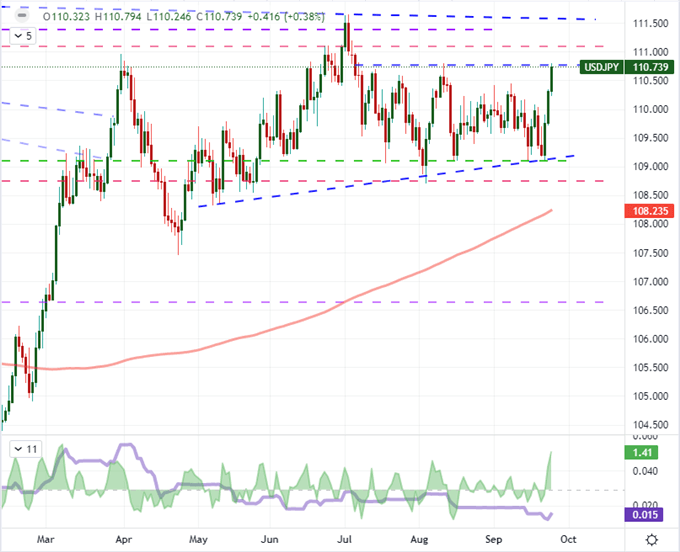 Another asset to watch close for its fundamental attention is the troubled Evergrande stock price. The Chinese property manager dropped for a six consecutive week after its attempt to rally on Thursday was cut down. This is truly a headline-bound stock; but its influence on the broader financial system is particularly strong. It is very unlikely that China allows this company to represent a contagion risk to its financial system, but it is currently in a 30-day grace period on a missed debt repayment. That suggests the country is using this heavily indebted company stand as a moral lesson to the rest of the financial firms in China that failure is an option – so clean up their extreme debt habits. While the government no doubt has a strategy in mind, their ability to maintain stability outside of their own borders is a serious limitation. 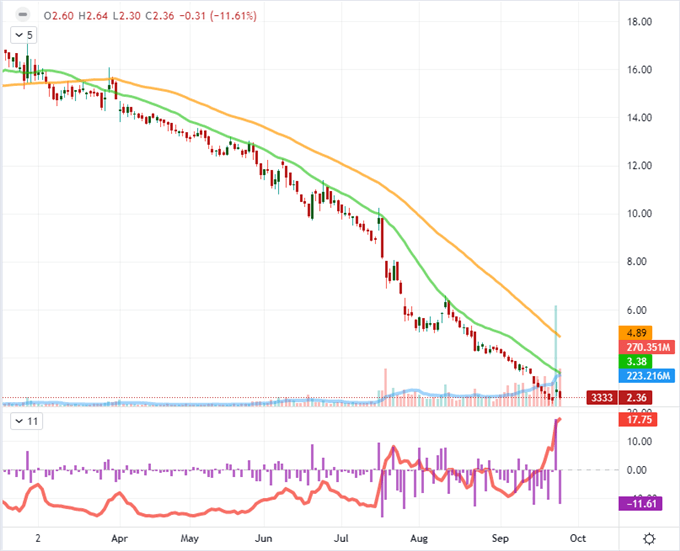