Technicals and Outliers are Note Enough to Charge Sentiment

Last week ended with something of a technical spark. The Dow Jones Industrial Average led a broad but liquidity-shortened ‘risk off’ move that resulted in the benchmark index closing below its 100-day moving average for the first time in 215 trading days. While there weren’t any other technical milestones of that same magnitude to give gravitas to the moment, it was possible that the markets were already tuned in to the expected tide change in market liquidity and performance that such an development could hit critical mass. Instead, the market resorted to the complacency and subsequent BTD (‘buy the dip’) mentality that it has so frequently defaulted to this past year. For the Dow, the gap higher on the open offered enough buffer that Monday was a technical advance – not much in the way of conviction but enough to get us back above the same 100-day. The balance of power seems to have shifted back to technical boundaries holding their sway, but there is still potential in the trajectory of volume and the known event risk ahead like today’s US CPI. Since the ‘value index’ has deflated its technical pressure, I will keep tabs on the S&P 500 which is standing just above its 50-day moving average and the channel support stretching back to the post-pandemic reversal. 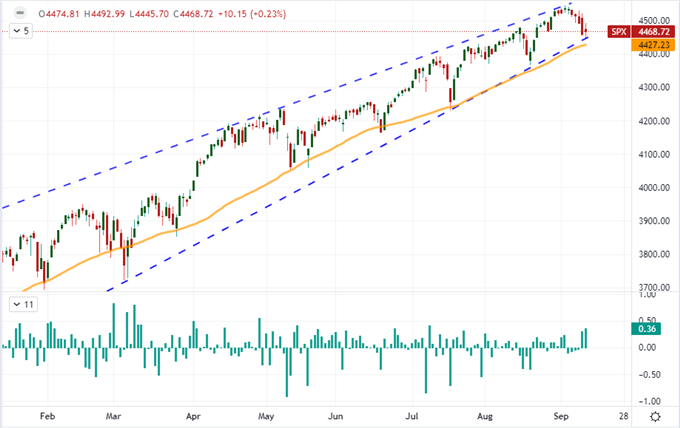 While the S&P 500 is yet another speculative leader that could lead the markets on a systemic risk aversion with a provocative break and enough headline coverage, it is still a fairly shallow measure of intent. My interests as far as ‘risk appetite’ go remain rooted in the movement of capital across the financial system. The correlation of otherwise loosely related assets and region along with an intensity of capital application are my preferred measure of the systemic. Meanwhile, I am still watching early warning signs. Even more sensitive to small eddies of speculative activity are the VXX which eased back from Friday’s charge, while the Dow to Nasdaq 100 ratio suffered a sharp correction from its two-decade high. This ratio speaks to the quality of risk appetite as well as the excessive risk exposure that has built up over the years – pushing this ratio to its Dot-Com bubble peak. In this way, this particular measure is both an early warning system and a good measure of momentum. 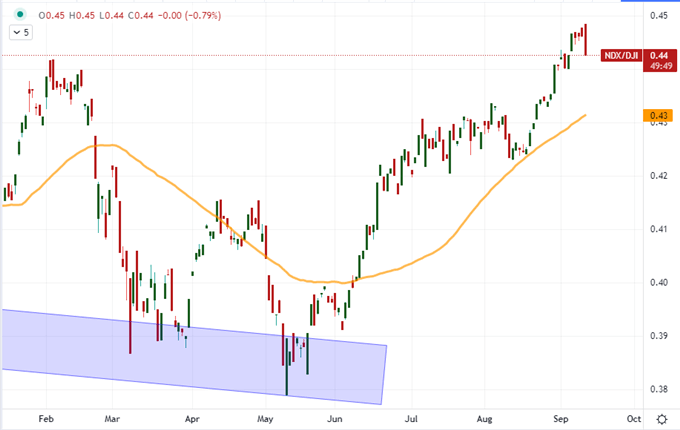 Starts and Fits of Volatility Still Define the Scene

There is some evidence that the market is living by its seasonal expectations. While we have yet to see the full-tilt volatility and the average loss expected over the month of September for the S&P 500, last week (post Labor Day) did register the five-day slide for the benchmark index and volume has edged higher. Taking a more granular look at the historical performance of the US index, we are currently in the 37th week of the year. Assessing the average of this week’s performance back to 1900, the market has averaged its fourth worst performance of the 52 weeks. This can be distorted by earlier years of thinner liquidity or outsized historical events such as flash crashes and crises; but over the larger sample size, there is likely statistical relevance here. 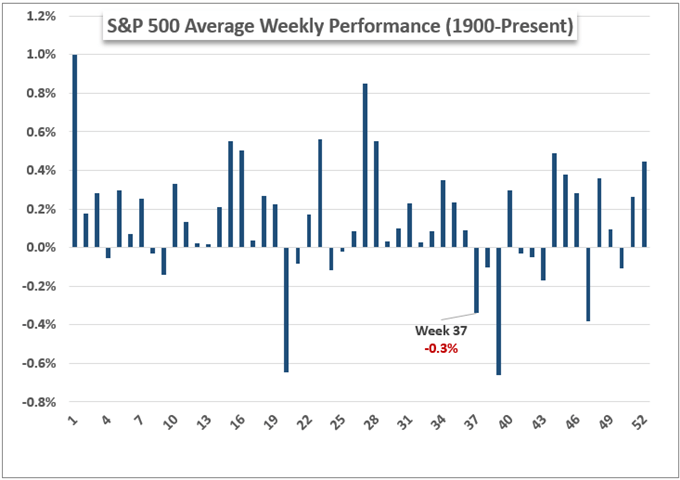 The market’s propensity for volatility and speculative upheaval is not just relegated to the top US indices. The heightened since of concern is a more universal state across the financial system, and pointed event risk or headlines can spur different assets to life. A great example of this vigilance was the dramatic response in the cryptocurrency market to a headline that was proven fake only after an incredible intraday surge. In the New York morning session, a newswire agency ran a report that conglomerate Walmart would accept Litecoin for purchases. That would have been a leap in legitimacy, but for an unusual currency given its relative liquidity compared to Bitcoin or Ethereum. LTCUSD surged 35 percent after the news within minutes and the broader crypto market followed in line as this would prove a bigger use case for the blockchain than El Salvador’s acceptance of BTC as a sovereign currency. That said, Litecoin and all the coins that shared in the rally would lose all of those gains – in some cases even more – when it was made clear that this deal had never been struck. We can and should blame the false news, but it is also a sign of the market’s eagerness for news and volatility. Further, how do we avoid such dramatic, false news? Look for confirmation and practice common sense rather than get caught up on the fervor – easier said than done, but a lesson born of personal experience. 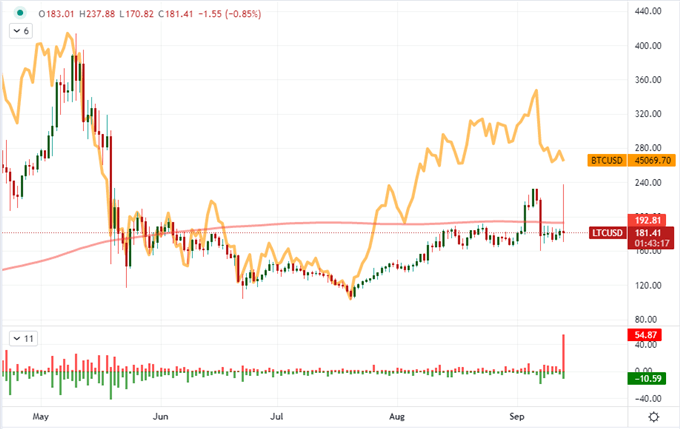 Top Event Risk for Tuesday Taps a Running Theme of Fear: US CPI and Fed Timing

From the flash newswires to the more reliable listings on the economic calendar, we are due some tangible event risk in this upcoming session. I believe the UK employment statistics and the run of Australian data (business confidence, housing inflation and tomorrow’s run of Chinese data) are fodder for the Sterling and Aussie Dollar. However, none of this data rises to the same level of influence as the forthcoming US August CPI or consumer price index. This is the market’s favorite inflation indicator rather than the Fed’s, but the market has a history of bullying the central bank into its position through its own expectations. This past session, the New York Fed released its monthly consumer expectations survey results which showed the 1-year inflation forecast advanced to 5.2 percent and 3-year outlook to 4.0 percent – both records for the series dating back to 2013. 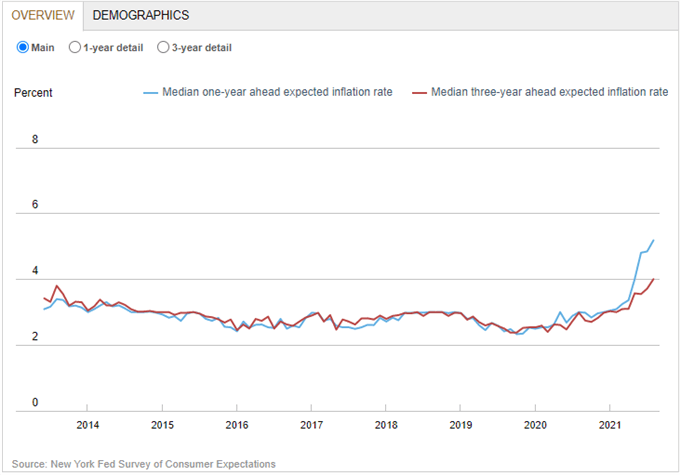 The US inflation data is particularly pressing this go around because of its close proximity to the FOMC meeting scheduled for September 21st and 22nd (next Tuesday and Wednesday). There is serious debate over whether the Federal Reserve will announce its taper at this meeting or one of the later meetings this year, and this particular meeting will present new forecasts for growth and interest rates. Naturally, this event carries a lot of weight for the Dollar and US markets, but I also believe it to represent the symbolic bow of global policy. Though we have seen a number of its peers already announce and embark on taper, I believe that the United States’ move into this direction would trigger a more definitive risk response. 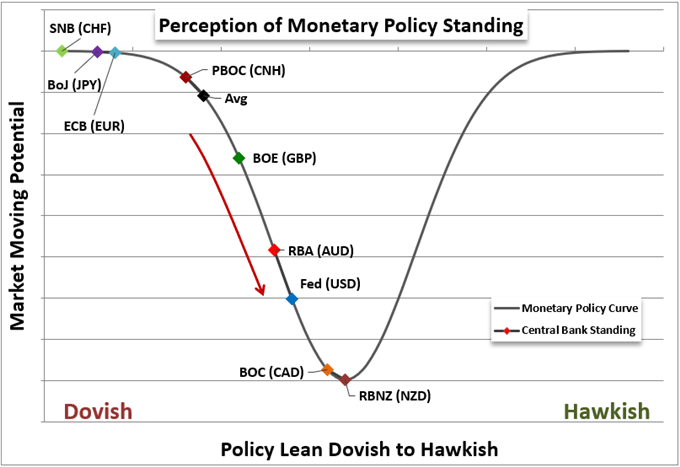 While US inflation carries a lot of weight for the Fed’s deliberating, there is still plenty of room for speculation as to how the group would response and we are still more than a week out. That said, to develop a trend in this period of anticipation would take some serious speculative conviction – not impossible but improbable. Pulling back from the full risk perspective, the Greenback is likely to be more sensitive and productive with its response to the data. I’ll point out that EURUSD is on the cusp of a further slide from the 1.1900 reversal but has been held up by the 50-day moving average as former resistance as new support. A rejection of that moving average this past session left the pair with a very large ‘lower wick’.

Chart of EURUSD with 50-Day SMA and ‘Wicks’ (Daily) 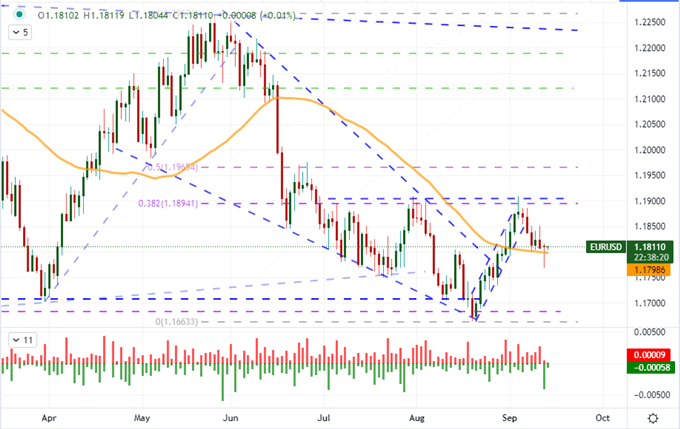