Still Waiting for Liquidity to Hit the Volatility Pedal

We are heading into the Thursday trade still awaiting the rush of liquidity and volatility that would fulfill the expectations for a more active September trading period. As far as virtues go, patience is one of the principals that has perhaps been the hardest to establish yet has served me best. Nevertheless, it can be difficult to watch the S&P 500 continue to carve out its most reserved two-week (10 trading day) pace of volatility via the ATR since the December holiday drain of 2019. There has been a tangible slide in from the SPX, Dow and even the hold out Nasdaq 100 through this past session, but all the immediate yet critical support levels are still intact. What is needed is either a reinforced sense of complacency or a catalyst for deleveraging. In the former scenario, the many temporary struts to the financial system can urge further build up on cheap funding but with a slow climb on stretched assets. The alternative would be a realization of fears – such as the reversal of monetary policy trends – that sees the markets fall into a potentially heavy and disruptive selloff. Either way, it is worth keeping tabs on the prominent risks and both record Covid cases amid a slide in consumer confidence and a broad warning of a reversed monetary policy current are tangible concerns.

Chart of Seasonal Monthly Performance of S&P 500, Volume and Volatility 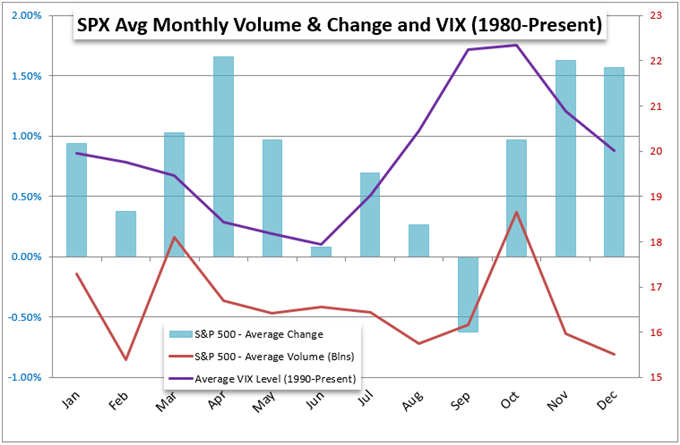 While the fundamentally-curious among us may continue to monitor the global economic docket and gauge sentiment from the many different participation groups, we can also find a meaningful perspective in the charts. My preferred gauge of ‘true’ risk appetite/aversion is a highly correlated and strong move in the various assets that historically align to ‘risky’ and ‘haven’ fields. That can be difficult for many to keep track of, particularly when time is limited, so the S&P 500 is a good and distinctly imperfect representative. US equities (indices as well) tend to default to a bullish bearing and hold out back against rumblings in risk trends until the risks are too prevalent to ignore. As a more sensitive signal, I like to refer to the growth-oriented indices (eg Nasdaq 100) relative to the value measures (eg Dow) to speak to the ‘quality’ of risk appetite. There, as I pointed out yesterday, we are facing the most extreme distortion in NDX-DJI since the peak of the Dot-Com boom/bust back in March 2000. 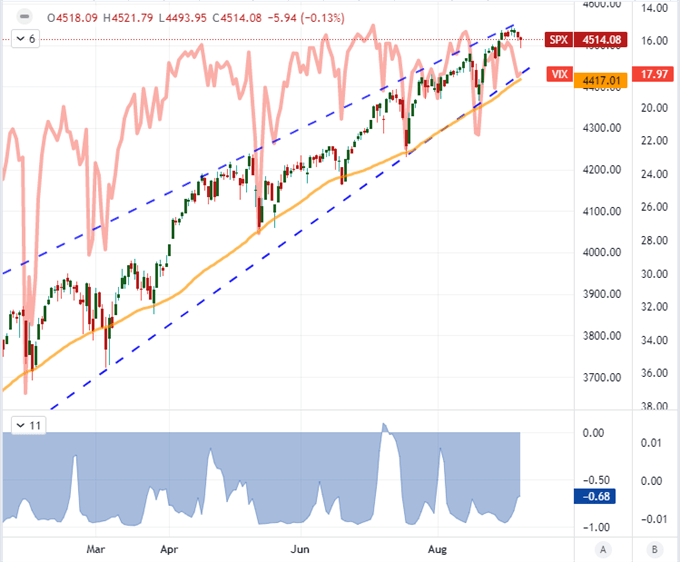 For many, myself included, implied volatility can offer an earlier measure of sentiment shifts. The VIX index is one of the most recognizable confidence gauges in the financial system, but it is popularity has led to a greater speculative interest in the measure itself rather than given a rudimentary gauge of hedging efforts. Nevertheless, there is a very distinct negative correlation between the VIX and the S&P 500 from which it is derived. That suggests that if the volatility were to pick up, a persistent tempo change would more likely need to come from the previously mentioned collapse. Taking it even further in the sensitivity scale, the VXX short-term volatility ETF brings the speculative interest in volatility to an extreme. This constantly deflated measure is pushing record lows while volume balloons as traders attempt to pick a bottom in activity – and indirectly a top in the markets. If this starts to take off, I will then look at the medium-term VIX, then to the S&P 500 and finally to the correlation in capital displacement among the many different risk assets that investors have favored this past year. 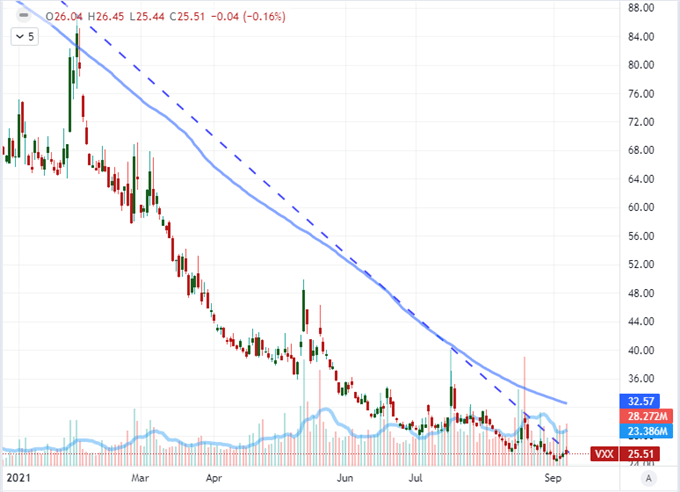 As we move into the second half of the week, there are two fundamental themes that are top of mind for me. Though it has taken a back seat in terms of market impact, the United States reported through Tuesday data a record high in new Covid cases having surpassed 301,000 people. This has not lead to a shutdown of the US economy as was previously the case, so the impact is not as dramatic on the markets. That said, consumer and other sentiment surveys have nevertheless taken note of the risk. Meanwhile, monetary policy and its contribution to risk taking has been a theme littered with critical updates lately. Though the Fed’s next official meeting – with the heavy taper debate and expected forecast updates – is two weeks out, the market has digested regular reminders of the stakes. The Biege Book was released this past session and the inflation warnings were clear as was the caution around the Delta variant’s effects – on their decision making as much as the economy. 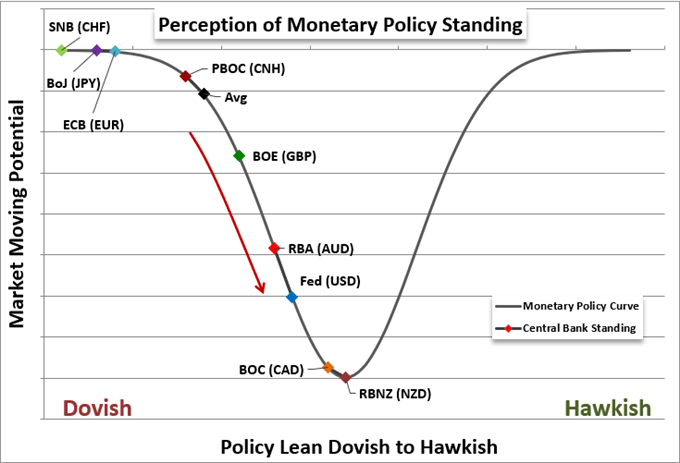 For active policy updates, the Bank of Canada (BOC) rate decision landed the proverbial plane with no meaningful surprises. The central bank was expected to hold its benchmark rate at 0.25 percent as well as its course of asset purchases to the tune of $2 billion per week. In that regard it exactly met expectations. What’s more, the outlook remained cautious but the expectations for inflation to truly return through the second half of 2022 and possibly justify a rate hike was maintained. This didn’t exactly spur the Loonie to a serious rally, but it did slow its decent. Perhaps a little more influential was the commentary from Bank of England members this past session who suggested the criteria for a taper and even the minimum threshold to start debating rate hikes may be sooner at hand than many expected. The Pound rallied as the remarks were digested but the bulls seem to be keeping their powders dry. 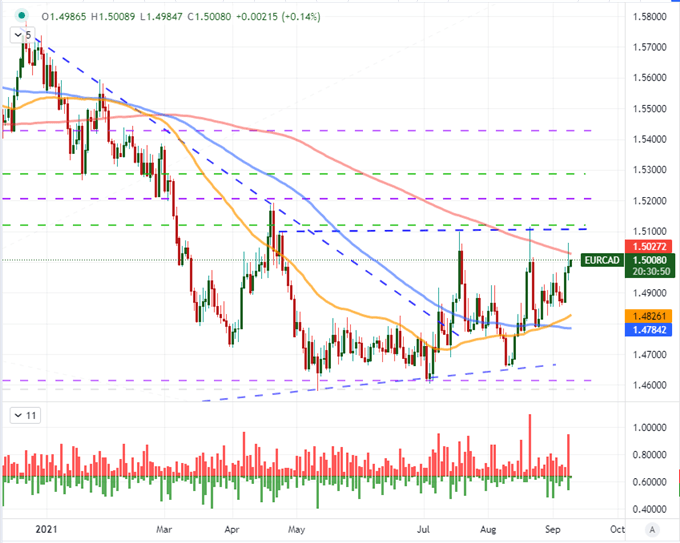 For the day ahead, the attention will be squarely on the Euro – and in particular, I’m watching EURUSD. The European Central Bank (ECB) policy decision would have been a non-event in my book were it not for the influence of speculation. In the past few weeks, the markets have made a clear drive to push speculation of a normalizing course from the central bank to a timeline as early as this year. That has pushed up the Euro across the board as well as European government bond yield such as the 10-year German bund rate. It would be very difficult for the ECB to fulfill these expectations given their extremely cautious position this year. This could create a scenario where confirmation of a taper discussion or complete rejection of the notion could lead to market response. Further, with he comparative aspects in rates of return and the serious attention afforded to the Fed’s timeline; any insight from the ECB will weigh heavily on the ready-to-speculate EURUSD traders. 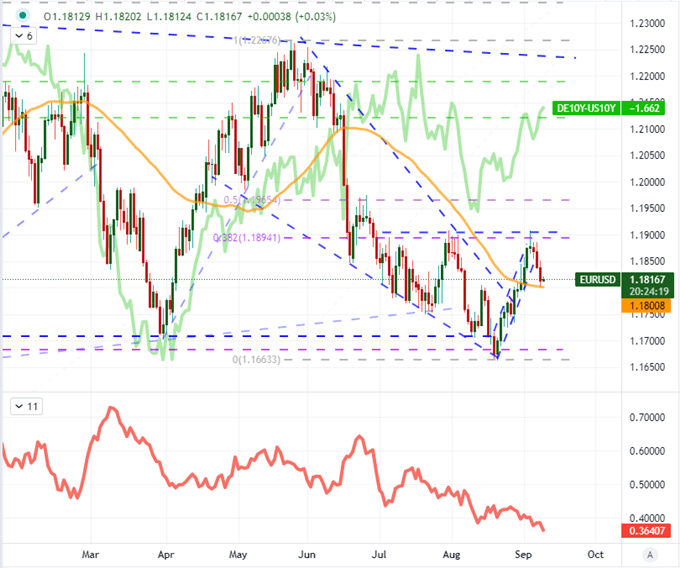