AUDUSD, NZDUSD and USDCAD Run while Dollar and S&P 500 Crawl

The outlook for risk trends to close out this week is not as clear cut as seasonal norms would suggest. Historically-speaking, we are passing through the absolute heart of seasonal liquidity drain and the final 24 hours of this particular week is notably barren of key events. Despite this mix, we are faced with markets exhibiting a remarkable amount of volatility. It is just enough activity in the financial system to draw notice – and fear among many bulls – without clearly threatening a systemic unwind of the post-pandemic recovery. In the aftermath of the Wednesday late-day collapse from the likes of the Dow, Asian and European equity indices tumbled; but no critical levels would fall. Other assets like junk bonds and carry trade would offer up a mixed bearing while emerging markets and crude oil began to move into firmer bear territory. From the S&P 500 and Dow, this past session was a large gap to the downside (largest since October for Dow) and subsequent recovery to end the day little changed from the previous close. As the saying goes: ‘no serious technical boundaries were harmed in this volatility’. Until 4,350 and 34,000 give way for the S&P 500 and Dow respectively, I will expect these speculative milestones to hold to seasonal convention. 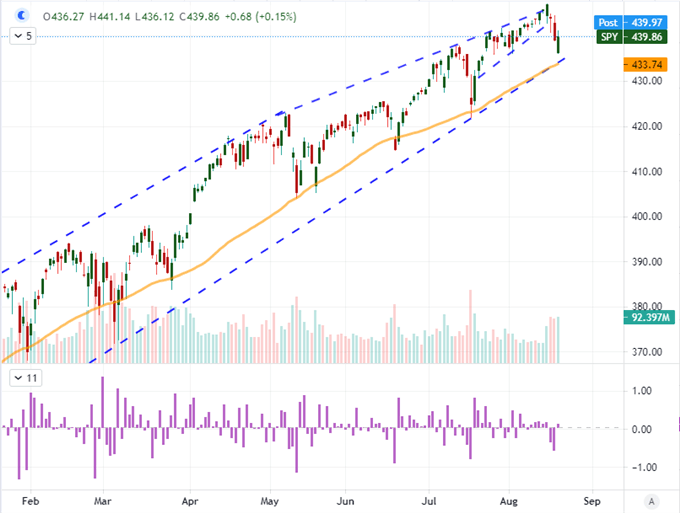 The Dollar’s Intentions Should Similarly Be Eyed with Extra Scrutiny

Another of the financial system’s leaders that has stirred discussion around whether there has been a material and lasting shift in gear comes through the US Dollar. The Greenback (DXY Dollar Index) broke above 93.50 and in turn cleared the March swing high and midpoint of the past 15-month range. Such a technical milestone would seem an occasion to charge strong follow through, but there was virtually no momentum to speak of after the breach. There is something to be said of the makeup of the ICE’s trade-weighted index. EURUSD is the principal component of this particular Dollar measure and the pair has similarly struggled to gain purchase after slipping below 1.1700. The more liquid an asset is in general, the less prone it is to bouts of volatility that arise owing specifically to thin conditions. Similarly GBPUSD extended a decline that was moving comfortably within a range (1.3900 to 1.3550) while USDJPY was essentially unmoved this past session. 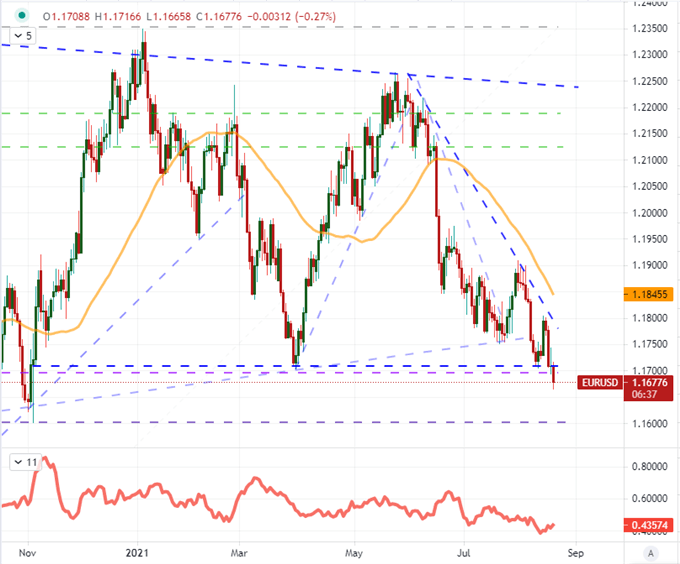 There is a conviction for the Greenback as much as there is for the risk assets like the US indices. Clearly, risk trends are not providing a consistent drive, so the safe haven status of the Greenback has not been properly fostered. Some would jump to interest rate speculation as the engine to carry the US currency higher, but there is a very overt lack of support from other assets that naturally respond to the same fundamental line. The US 10-year Treasury yield actually lost altitude this past session while the implied interest rate forecasts through 2022 derived from Fed Fund futures was unchanged at 17.5 basis points (a 70 percent probability of a standard hike by December of next year). The FOMC minutes released Wednesday afternoon certainly add credibility to speculation that a taper is nigh, but the market paid the comments little-to-no heed on its release with the Dollar only finding traction some hours after the talking points were absorbed. With only a scheduled speech from Robert Kaplan (a non-voting hawk) ahead, it will be difficult to charge hawkish speculation further. 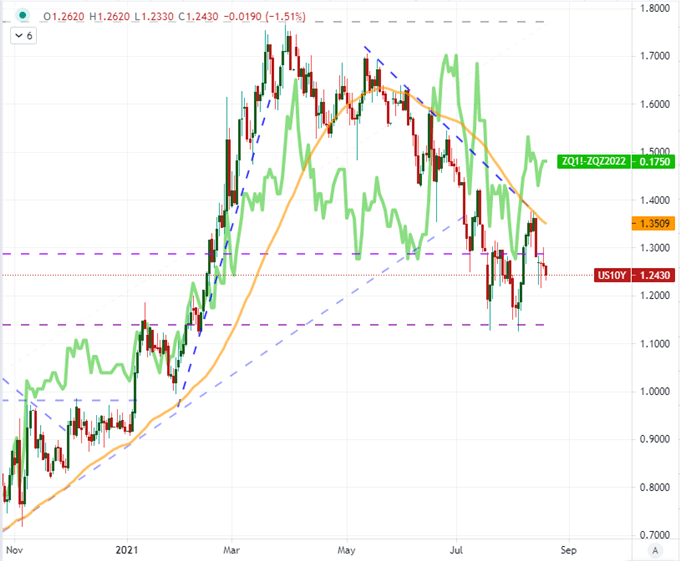 Are the USDCAD, AUDUSD and NZDUSD Defying Seasonal Limitations?

Where the Dollar’s progress and technical picture is unconvincing through its core counterparts, there is an unexpected degree of consistent drive for the Greenback among the so-called ‘commodity crosses’. Perhaps the most impressive move would come on part of USDCAD. The pair posted its biggest single-day rally since June 11, 2022 this past session with a 1.4 percent explosion higher and in turn over took July’s swing high to trade at levels not seen in 6 months. This four-day rally looks like the progression on a technical trend, which is remarkable given the Bank of Canada has already tapered twice this year. It is possible that this is an outlier where trends can form amid persistent congestion, but what is the probability of that happening? The answer to that question should be processed through our personal risk tolerance to see whether we should consider this a viable development. 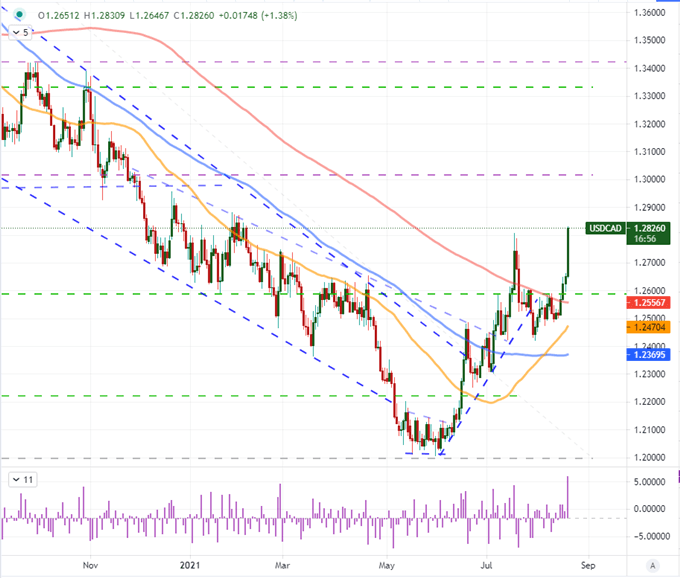 A more productive pairing for the US Dollar is AUDUSD. The most recent four-day tumble has pushed us through 0.7200 and in turn taken out the 61.8 percent retracement of the 2001 to 2011 bull trend – essentially the life range for this cross. This most recent leg is an extension on a much larger and productive trendline lower. It started back in June when clearly 0.7700 represented a neckline break on a smaller head and shoulders pattern with an eventual clearance of 0.7550 taking out a similar reversal pattern that developed throughout the first half of 2021. The progress since taking out the floor has been agonizingly slow for momentum traders, but it has slowly progressed. Interestingly here, there is far less fundamental friction from the RBA’s own monetary policy stance as the central bank has struggled and the government has restored targeted shutdowns amid swells in Covid cases. 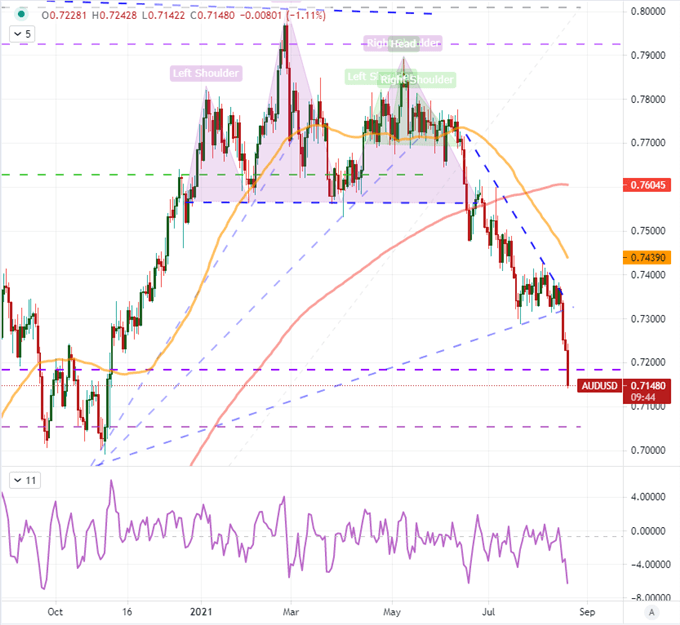 Speaking of Covid cases, New Zealand announced it was shuttering for at least a brief period after the discovery of a few positive cases of the virus in the country. That led the Reserve Bank of New Zealand (RBNZ) to delay what was considered by the market to be a certain 25 bp rate hike. That said, Governor Orr made clear that the central bank was likely to move at the next meeting in early November with the market speculating on two hikes before year’s end. That is perhaps why the reversal pattern that has developed in 2021 in favor of the Greenback on NZDUSD has been slower and the recent break through 0.6900 looks more technically significant. Unless there is a full-tilt risk aversion to come to end this week – or into next week – this is a run that is likely to ease up much faster than AUDUSD. 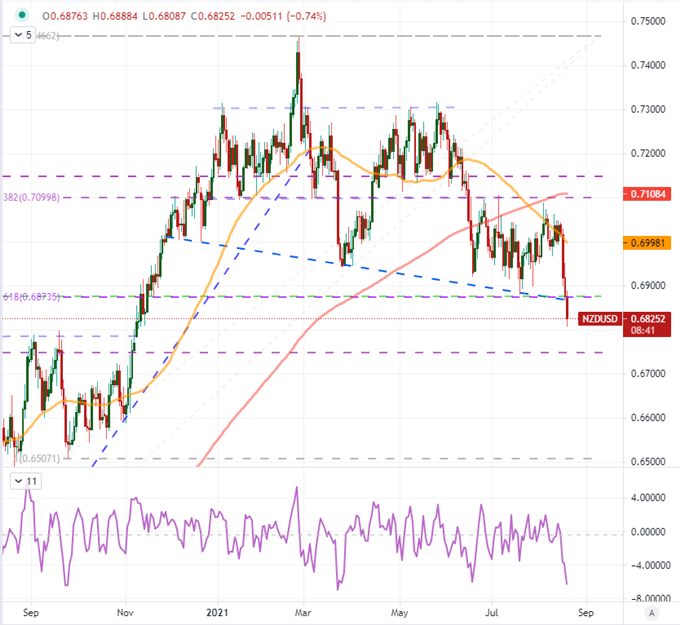