A 24 Hour Swing in Sentiment As the Concerns Stack Up

Markets opened the week to a distinct sense of risk aversion but sentiment managed to fully swing to a bullish course by the time Tuesday trade rolled into view. The carryover of last week’s shocking University of Michigan consumer confidence report compounded worry around the Fed’s taper intentions and rise in Covid cases, but it was the disappointing run of Chinese data and reports of tumult in Afghanistan with the United States’ withdrawal that added a fresh perspective of global uncertainty. Monday’s Asia session was marked by sharp declines like the -1.6 percent drop from Japan’s Nikkei 225 – though the Shanghai Composite was noticeably sanguine. By the time the European markets came online, the tempo eased somewhat, but the pan-European Euro Stoxx 600 nevertheless registered the bearish sentiment with its first daily loss in 11 sessions, breaking the longest run since 2007. Yet, heading by the time Tuesday trade has opened, the tide seemed to have turned. 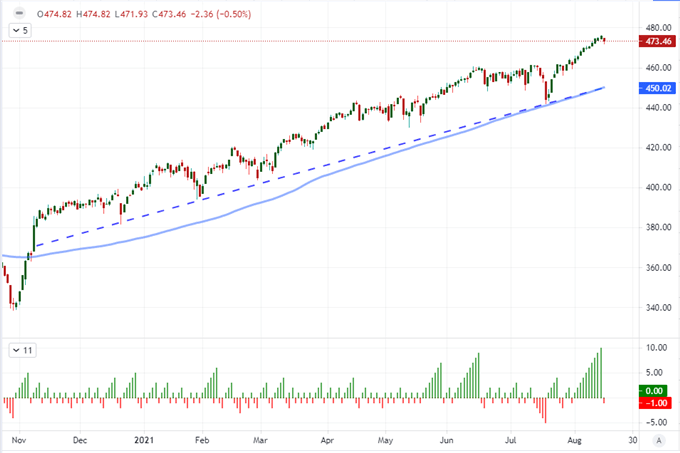 Initially, the US indices opened Monday to a gap lower of -0.14 percent from the S&P 500 from Friday’s close. The markets continued to slide after that opening salvo, but the fear didn’t seem to gain enough gravity to fend off the opportunists looking to ‘buy the dip’. The intraday reversal left a meaningful ‘lower wick’ on the daily candle and generate some meaningful volume on the SPY ETF. Bullish interest in this case seems to be principally a mean reversion taking advantage of the brief swell in volatility. These checks are proving fairly common in these frustratingly reserved conditions, dashing hopes of more systemic moves. 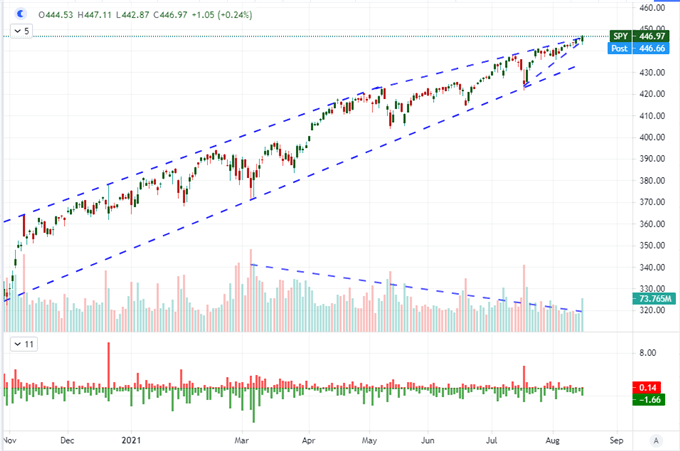 As we wait for the eventual catalyst that will be tied to the market’s revived liquidity and volatility, I continue to keep tabs on global ‘risk’ measures that set the range of the sentiment trade (from most bullish to bearish) as well as offer perhaps individual opportunities of their own. One of the more progressive assets on the speculative scale I monitor is the FX carry trade. The Yen crosses have leaned into a moderate correction for the past few months. At the moment, EURJPY is one of the most provocative of the pairs with a -0.5 percent drop this past session that has pulled the pair below its 200-day moving average for the first time in 300 trading days. A further break below 128.50 would seem a fitting next stage for bears, but I am keeping in mind the general restraint on markets. 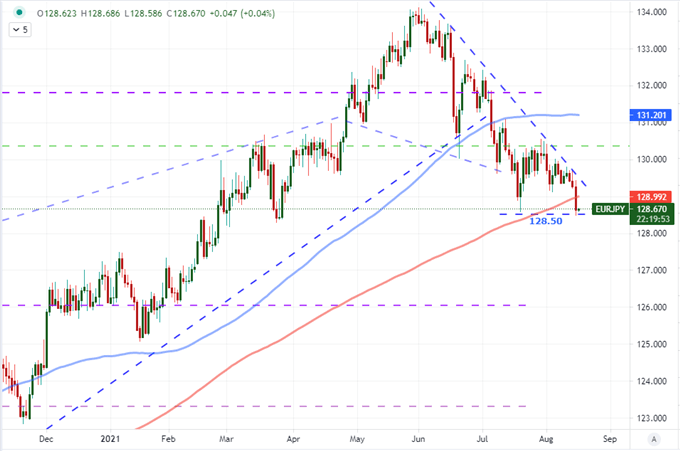 The Persistent Interest Around Fed Policy and a Measurable Range

While there are a number of themes on the threat radar, it is clear the market is willing to discount anything that doesn’t present a clear and imminent danger to financial stability and returns. For the situation in Afghanistan, the instability in the region doesn’t seem to present a pressing threat to global growth nor liquidity and is struggling to find purchase even from typically sensitive assets like crude oil. Growth fears further complicated by the rise in Covid cases in the US and other countries is more material; but even there, the interpretation for markets remains a point of contention. Meanwhile, a common theme that we will wade back into starting with Tuesday trade is US monetary policy intention – more frequently referred to as the ‘taper’ nowadays. While there are obvious ‘risk’ implications on this matter, my focus remains on the Dollar. As the most liquid ‘major pair’, EURUSD is trading in a fairly tight range between 1.1800 and 1.1700 which could provide the staging for any short-term technical moves – though I remain dubious of serious breakouts. 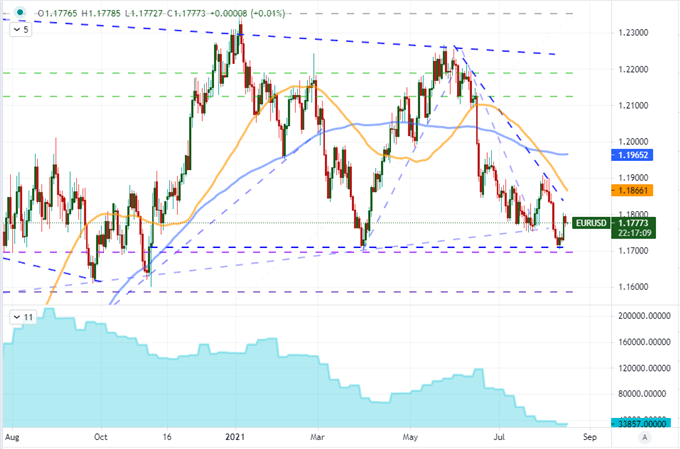 Through this past session, another Fed official was on the wires giving his perspective of the appropriateness of the withdrawal from the central bank’s massive $120 billion per month stimulus effort. While Boston Fed President Eric Rosengren is not a current voter at the central bank, his views factor into the group’s general sentiment. He stated that the criteria for taper have already been met for inflation, and another strong employment figure could bring him around to support a September taper announcement. These are outright hawkish remarks from a regional president, but we are unlikely to find the same candor from Chairman Jerome Powell himself when he speaks at his townhall later today (17:30 GMT). The talk is supposed to be to teachers, but the stakes are so high that it seems very probable that the central banker will use the opportunity to direct expectations. Don’t forget that this will be followed by Wednesday’s FOMC meeting minutes with more detail on nuance.

The More Discrete Options for Volatility

While US monetary policy and the risks of another rise in Coronavirus cases carries far more significance for global markets, I remain more interested in the distinct events and technical patterns that can generate measured moves with the proper application of pressure. The FXI ETF’s response to the Chinese economic data and EURJPY tumble tracing European capital market’s struggle are examples. Ahead, the UK employment statistics may present a Sterling spark, but I’m dubious of GBPUSD’s ability to escape the anticipation. For sheer potential, the New Zealand Dollar’s impact from the RBNZ rate decision seems a particular charge. A pair like NZDUSD may seem appealing, but the competing influence from the Greenback makes for a more complicated response. AUDNZD on the other hand has seen a steady Kiwi build up seemingly in anticipation of the economists consensus for a 25bp rate hike. This could lead to the eventual 1.0425 bearish break, but the bigger impact would seem a dovish outcome (perhaps ‘dovish hike’) to reverse the premium. There is time to prep with the decision on Wednesday morning. 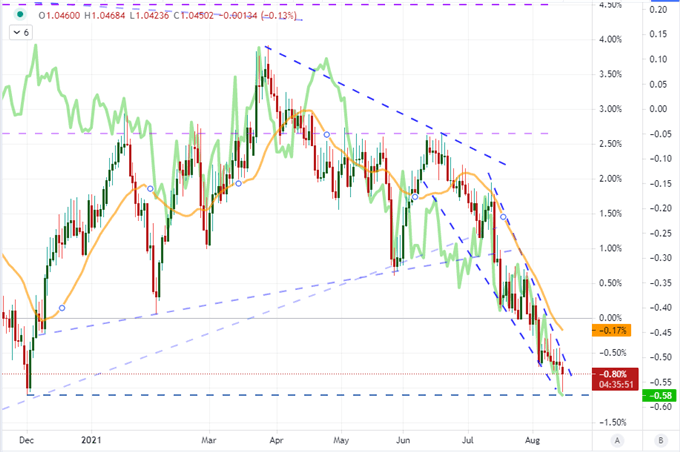