The Difference Between a Tempo Change and Mere Jolts of Volatility

This past week ended to some impressive historical milestones and even some isolated swell in volatility. The question is whether these provocative developments can carry over into productive market movement into the week ahead to generate meaningful trend. While I would certainly welcome the volatility as a trader, my practical side says a systemic shift in tempo is unlikely for week ahead. Liquidity is a persistent brake on progress with the seasonal curb on activity through the height of the ‘summer doldrums’ playing out exactly as market metaphors would insinuate. We are passing through the proverbial ‘eye of the storm’ of volatility in an already depressed liquidity situation. It is possible that we break this quiet, but the threshold should be considered very high. During such conditions, the expectation is for volume to continue to abate (as we see happening below) while the saying goes that it is not wise to short a quiet market. To make things even more resistant to change, there is the element of anticipation. With the Jackson Hole Symposium set to meaningfully tap the global market’s interest/fears in Fed intent August 26th through 28th, it will be particularly difficult to rouse the troops to rally. While most rational traders/investors would recognize the milestones and timetables of systemic events moving forward, the swell of activity to end this past week may stoke their appetite for something different. To end this past week, the Dollar took a nose dive – which translated into a EURUSD rally – when the University of Michigan’s consumer sentiment survey suffered a 10 point drop to 70.2. That is the lowest point since 2011 and one of the six largest monthly declines from the series since its inception nearly half a century ago. In other words, it is a troubling update. And yet, the US indices were not put off course while the Greenback dove. Perhaps the currency’s move was amplified because there was a ready range to work off of while the broader market was not particularly clear on the implications of a slide in sentiment when inflation expectations were still extremely buoyant – perhaps a reinforcement for Fed action sooner rather than later. Overall, I took note of the EURUSD’s rally, but I’m not heading into this new week with assumptions of new trends on hand. 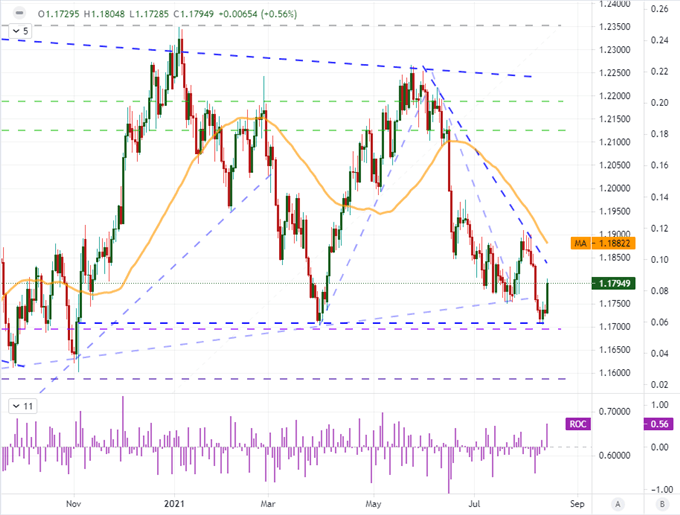 Fed Policy Anticipation is Both a Dollar and ‘Risk’ Focal Point

Key event risk can prove a major market mover – as this past week’s sentiment survey proved – but it can also flat as an influence depending on how the data prints. I would argue that the most consistent influence is anticipation of the release. Since we don’t know the outcome of the ominous event risk, the markets are more likely to hold steady until it is clear how the fundamental wave will impact. I usually look at this on a specific event basis like a FOMC rate decision or NFPs. However, this also applies to the systemic. Consider the major milestones for which the US central bank could be reasonably considering a shift to its extremely accommodative monetary policy stance. The most immediate milestone is the August 26th-28th Jackson Hole Symposium for an announcement, but many are also looking to the September 2nd FOMC meeting. The summer doldrums are in full effect, reinforced by the systemic uncertainty as to what can carry such a mature market further. I believe monetary policy is a global influence and the US central bank is the world’s largest with a reference back to 2015 as a guiding light for developed world efforts. I will consider this an overriding theme to monitor closely moving forward. 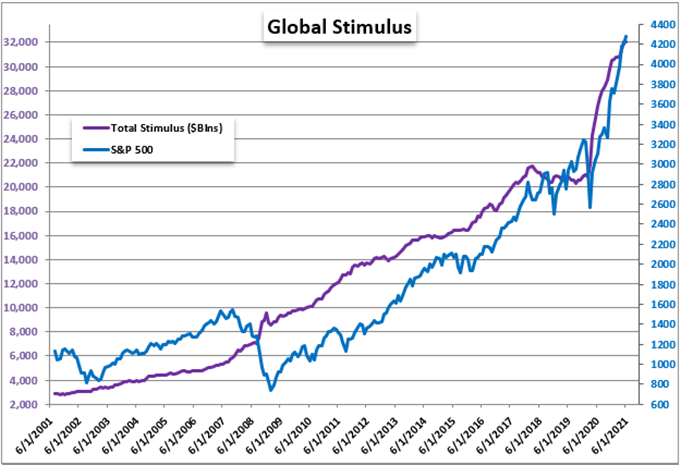 While US monetary policy is a factor for global risk trends, it is also a critical Dollar performance factor. The Greenback starts the new week in retreat after the frankly shocking US sentiment survey. However, it is worth taking a closer look at that confidence update. While there is a notable partisan disparity in the data, both Republican and Democrat submissions reported a sharp drop in confidence for the month. That likely takes into account the rise of new Covid cases but it is no doubt also reflective of the persistent rise in inflation. So, while a slide in confidence is a growth concern, it could also be read as a need for the Fed to act on its extreme stimulus position. As such, don’t count the Dollar out yet.

The ‘Effective’ Event Risk for the Week Ahead

On the point of US monetary policy, while my key dates to watch are August 26th and September 2nd, there are interim milestones that will shape expectations in the interim. For this coming Monday, we have a scheduled speech from Fed Chairman Jerome Powell. The town hall is for teachers, but it is very reasonable to expect him to use this opportunity to message to the markets and economy intentions from the policy authority to dampen any shock on any decisions that are ahead. On Wednesday, the FOMC minutes will be processed for further detail on the scope of discussion for change in the foreseeable future. The monetary policy statement that immediately followed the late July decision doesn’t give much detail. This offers it in spades. 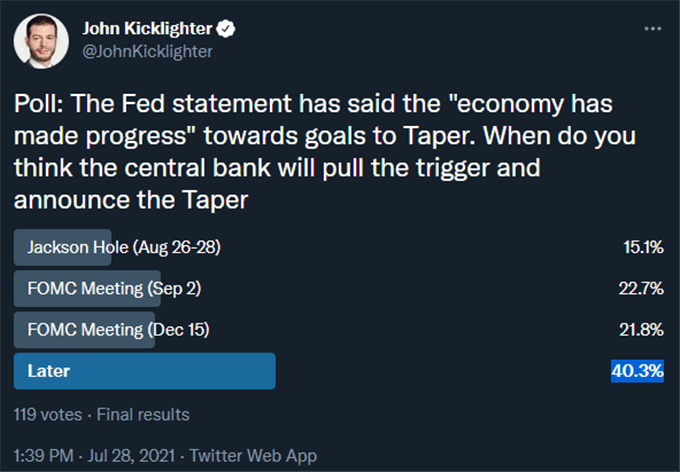 Looking to the various Dollar-based majors, I do believe that the slide from the Greenback will not simply pick up where it left off on Friday. That said, there is still potential. If there is a bearish extension for the key currency, my attention will be less on EURUSD and more on a cross that has yet to resolve its technical ‘break’. That will offer some charge and short-term acceleration to a technical swing into the new week. For that, I am looking to AUDUSD. It could break below 0.7300, but my preference for circumstance would be a move above 0.7400. 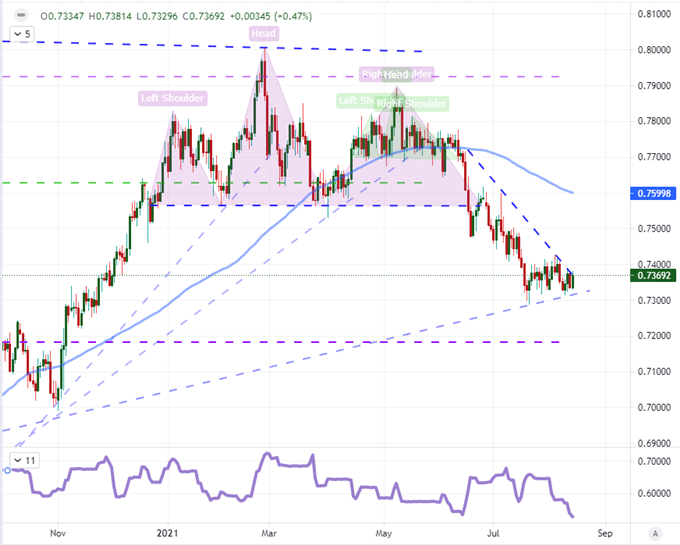 Not everything on the docket ahead is Dollar-centric – but much of the market moving potential will definitely reside there. I will be watching the Australian employment and UK inflation statistics among other data points ahead; but my top non-US event risk is the RBNZ (Reserve Bank of New Zealand) rate decision. Given the focus on monetary policy, we have seen this central bank signal a more hawkish intent than most of its larger counterparts. That could make for a very interesting Dollar contrast on NZDUSD, but crosses like AUDNZD are even more likely to respond to the outcome. 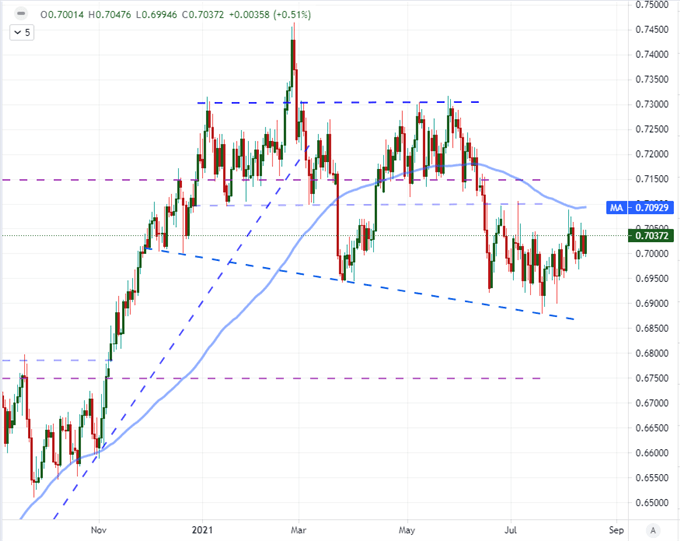