Dow Breakout: Another One Bites the Dust

This week has been dotted with tentative technical breaks and undetonated fundamental sparks that have failed to generate meaningful traction. That same complication of unfulfilled conviction was witnessed with the Dow Jones Industrial Average which seemed to hold so much promise through Wednesday’s projecting bullish breakout. The index cleared 35,300 (353 on the Diamond ETF), and seemed well positioned in a technical textbook-way to extend an unencumbered run into record territory. The essentially unchanged session Thursday after trading in the red for most of the day proved once again that securing a technical feat alone is simply not enough to override the curbs on market participation we are currently wading through. Through the final 24 hours of this trading week, I won’t be altering my expectations for measured moves. That isn’t particularly difficult with themes like Fed taper speculation, the spread of Covid-19 and the infrastructure spending bill failing to charge markets. That said, it is still worth keeping track of the limited high-profile event risk on tap – mainly the University of Michigan (UofM) consumer sentiment report. 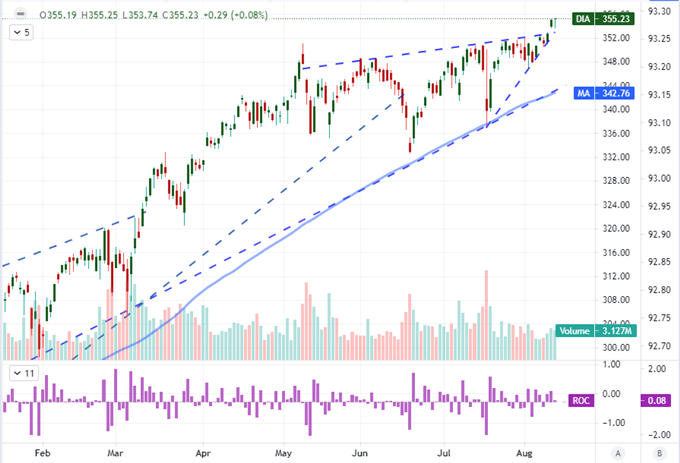 When markets do begin to fill out once again with volatility-providing liquidity, the markets will be well primed for transition to productive moment – at least statistically. I will point out that though the S&P 500 (SPY ETF below) may have picked up its pace a little bit through this past session to hit a record high, the advance is still an utter crawl. Amid the continued slide in volume, it is worth noting that the 5-day (equivalent of one trading week) tempo via the ATR is the lowest in since the Christmas period 2019 and before that you need to look all the way back 2017. The historical range measure over the same look-back has similar context. I make reference to 2017 – specifically the second half of the year – frequently. The activity level through that period was the most sluggish we’ve seen in modern financial records with the an incredible stretch without a meaningful correction while the VIX registered over 50 days below the 10 market. During this period, the market had a few slow corrections, but it generally crawled higher throughout. Something to consider. 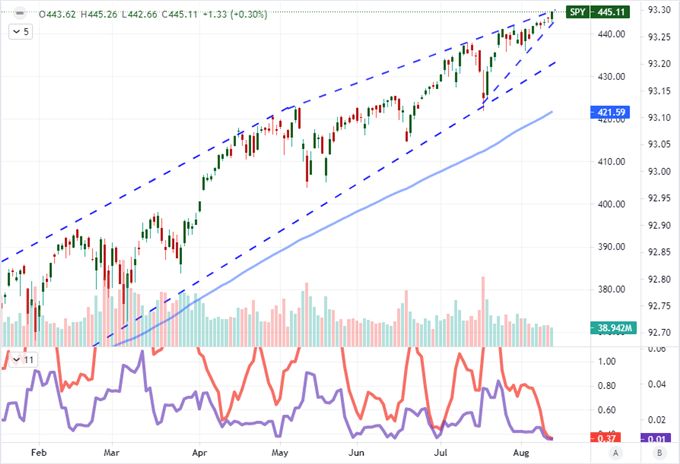 Data Can Do As Much To Thwart a Market Run as Inspire One.

Yet, while the broader market is still moving through its existential issues with liquidity, there are still instances of high-profile scheduled event risk and technical developments that draw market interest. Stirring our interest is one thing, making for a productive move is quite different. This past session, one of the most loaded assets on the board was GBPUSD. Complementing the US PPI release, Cable was facing a deep run of UK data. The June and 2Q GDP figures proved to be better than expected a strong economic tailwind at 1.0 and 4.8 percent respectively. That said, the good this could have provided to the Sterling was drowned out by shortfalls (relative to consensus forecasts) on the trade, industrial production and construction statistics. An abundance of data can help leverage market movement to overcome tepid market conditions, but that is dependent on a consistency in the staistics. 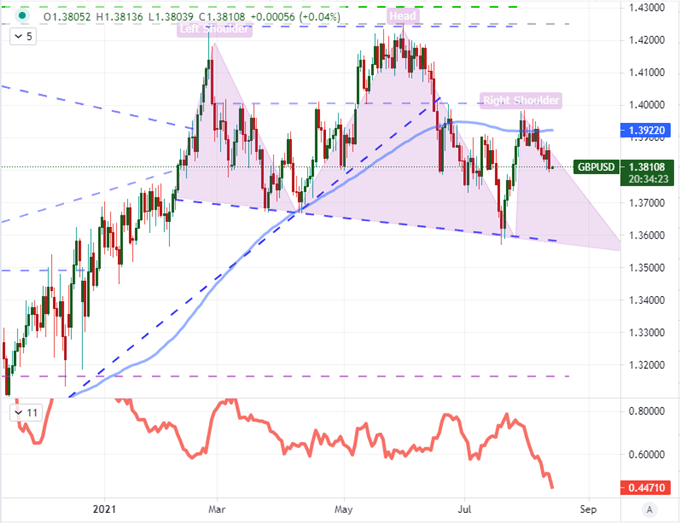 On the Dollar side of things, we had yet another data point that seems to build momentum towards a forthcoming Fed taper. While it doesn’t receive nearly the press that the CPI (consumer price index) does, the PPI (producer price index) is an upstream inflation figure that gives critical context to the economic backdrop. The factory-level reading hit a decade high and only furthers the pressure on the Fed to bow out of its extreme stimulus program to avoid further fueling financial inflation that is out of touch with economic growth. As a market mover, the Dollar, 10-Year Treasury yield and implied Fed Funds futures yield through end of 2022 all edged up modestly. That said, no technical levels were broken in the move.

Chart of US Headline and Core Inflation Year-Over-Year (Monthly) 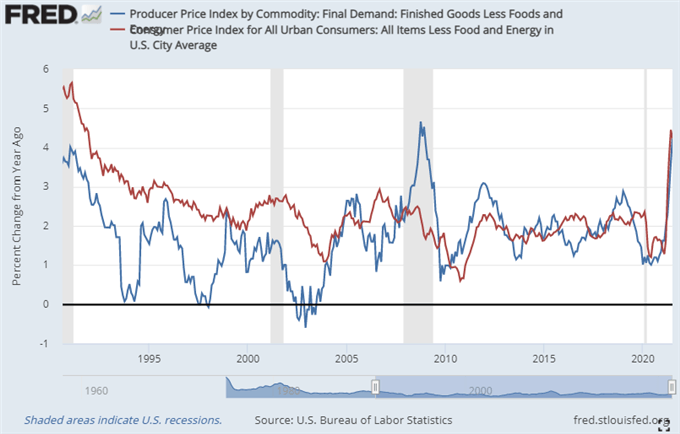 Top Event Risk and The Beacon Through the Doldrums Fog

Looking ahead to Friday’s event risk, there is little to distract us from the higher profile August reading of consumer confidence from the UofM. This indicator gets significant fanfare in normal times; and amid such volatility in employment trends, spending-based growth and inflation, the details will carry significant weight. Yet, fundamental influence is not the same thing as tangible volatility. A significant surprise in this report could charge volatility; and I think a disappointment weighing ‘risk’ assets or strong reading boosting the Dollar are the best scenarios for activity. That said, the fast fade in liquidity into the weekend is likely to find little provocative development to leave us with a cliffhanger to fulfill sometime after markets fill back out. 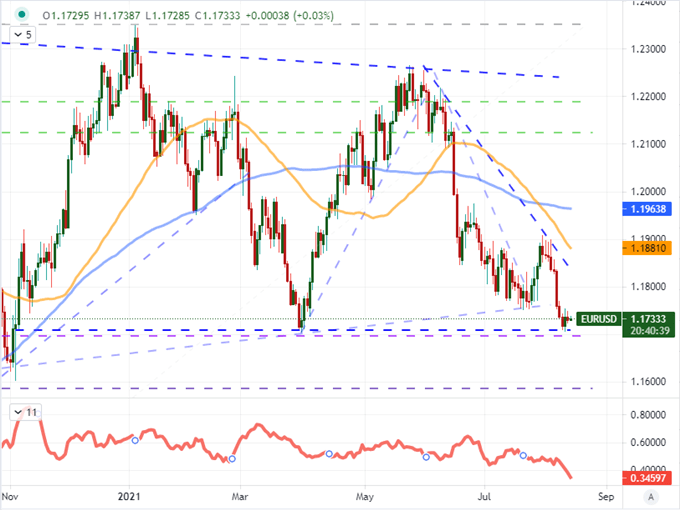 I know much of our interests are tied up in what happens in the immediate future, but I believe it is important to keep a medium-term outlook on the markets. In two weeks’ time, we will be reading headlines from the Jackson Hole Symposium with the following week holding the FOMC rate decision and quarterly updated forecasts. There is a much greater probability of market activity at this time with the speculative seasons also shifting around this time. While we are not going to find any definitive read on intent from the world’s largest central bank until those milestones, the market may decide to cast its forecasting eye on the potential well before the official dates. For that reason, I keep tabs on the temperature of intent from this remarkably influential group. Below, I have mapped out the timelines that have offered by different Fed officials in their rhetoric around the taper – the first move towards normalizing monetary policy. Keep it in mind as speculation will continue to build around this theme, providing the backdrop for when a surprise data point or event triggers a definitive update against the market’s assumptions to that point.