Once again, the promise of a break and substantive move that could urge the market to finally abandon its liquidity fast has fallen apart. The US CPI data was the perfectively placed data point to build upon a natural momentum in Fed rate expectations that carried EURUSD (and the Dollar more generally) to the border of a year-long congestion pattern. Yet, the print failed to earn a critical breakdown from the cross and instead saw the market revert to range. Some may argue that was owing to the outcome of the inflation statistics themselves, but I believe it was the more likely outcome given market conditions are proving so restrictive for the high profile developments that require true conviction to gain traction. So, even though we have seen the Dollar fall short and Gold’s incredible volatility quickly snuffed out Monday, there are no doubt still a host of traders that believe the Dow’s bullish break this past session will set the stage for strong charge through the back half of this week. Anything is possible, but conditions and correlations suggest that is improbable. 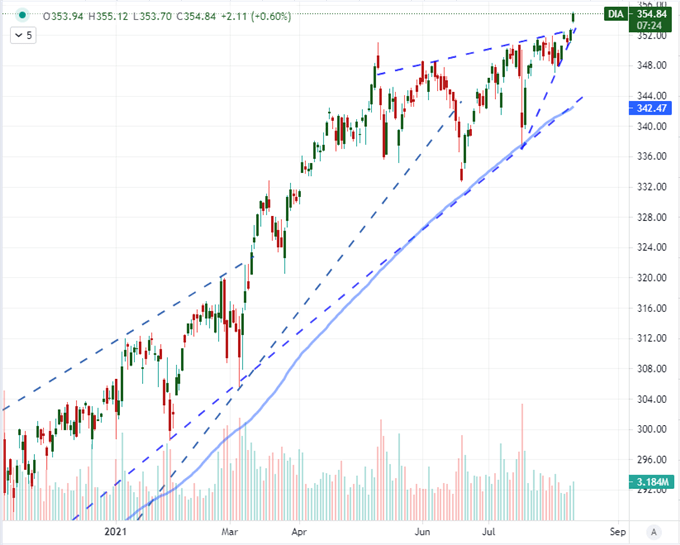 There is little doubt in my mind that what the Dow saw this past session qualified as a technical break. A terminal range developed over this past month had essentially come to its apex and would need to ‘break’ owing to the fact that it had simply run out of room to move. I call these ‘breaks of necessity’ in contrast to a ‘break of conviction’. Beyond the general state of the market’s doldrums, there is a ready break to consider against the Dow in the Nasdaq 100’s retreat this past session and the S&P 500’s absolute lack of traction. While these three indices do diverge modestly, their overall correlation is extremely high. A Dow rally is most likely to survive only if its counterparts were to join in the move, and that doesn’t look to have much support at all. The blue-chip index is the outlier and thereby likely to pullback to converge or simply hold highs and simply stall out. Meanwhile the SPX is better reflecting conditions with the smallest four-day historical range and volatility (ATR relative to spot) since December 2017. 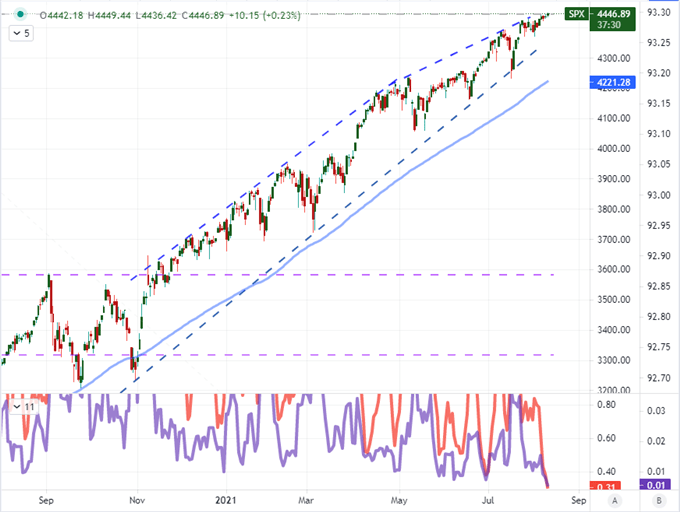 While the US consumer inflation data released this past session has passed with a relatively tepid response from the markets, it isn’t without value for the future. The ‘disappointing’ element to the data for traders looking to ride the Dollar’s forecasted yield advantage was the inevitable moderation in the incredible surge in the series this past year. The month-over-month tempo for price growth slowed from a 0.9 percent surge in June to 0.5 percent this past month. For the annual figures, the headline rate held steady at 5.4 percent (a 2008 high) and the core reading eased as expected to 4.3 percent (just off its high back to 1991). These year-over-year figures will also cool as the reference period (the month from the year before) reflects the jump in demand during and after the pandemic peak. Yet, while that may preclude the need for an emergency rate hike from the Fed, it doesn’t reduce the need to normalize monetary policy from its extreme settings of the pandemic.

Chart of US Headline and Core Inflation Year-Over-Year (Monthly) 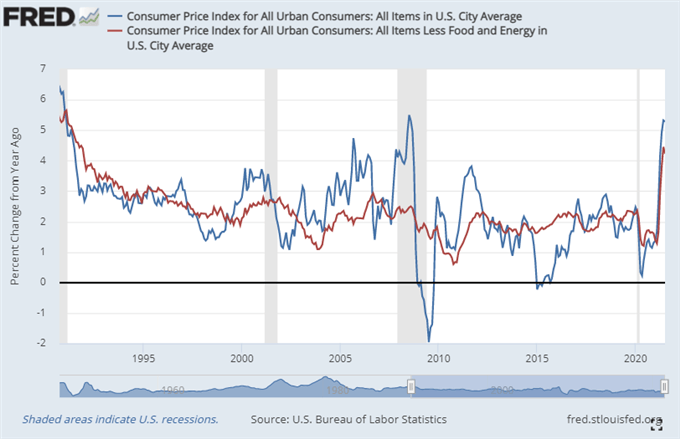 While the rise in interest rates draws the forward-looking interest of the markets, the decisive measure for near-term monetary policy speculation is on the taper. Reducing the monthly purchases of assets as part of a stimulus regime above-and-beyond the zero rate threshold is something all major central banks are weighing, but the Fed is the world’s largest central bank representing the largest economy and most heavily used currency. It’s dictates have influence far beyond its own market. This past session, we had another run of comments from different policy authorities to build on Bostic’s and Evan’s established extremes of the Fed scale. Dallas Fed President Kaplan said he favors a taper announcement in September and start in October, Kansas City Fed President George said the “time has come to dial back the settings” and Richmond Fed President Barkin presented in the middle of the pack by saying a taper start could be a few more months out. At this point, the scale seems to be a start between September and December, and that is more hawkish overall than where we were six months ago. 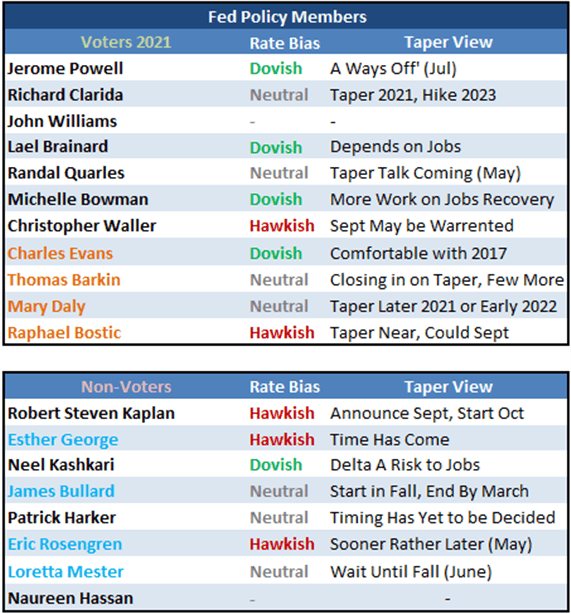 Markets are typically sensitive to interest rate forecasts – particular the FX market – but the fine tuning of rhetoric is not likely to charge the kind of conviction we would want to see to inspire a momentous Dollar rally or S&P 500 breakdown. On the other hand, it could inspire a more measured move like a swing within an established range. That would seem to appeal with EURUSD, but the problem is the technicals don’t fit the fundamentals. After its 8-day decline and bounce at range support, the pair looks well placed for a bullish rebound. That said, the measured march towards the taper is a Dollar bullish (EURUSD bearish) influence. While fundamentals may not earn a 1.1700 break, they can hamper progress on a bullish move that was already struggling with market conditions. 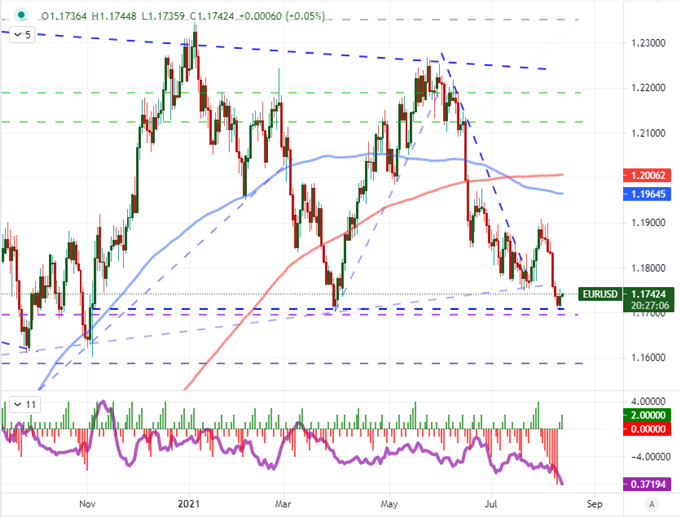 A Few Pairs to Watch That Fit Market Conditions

Rather than waiting for the massive charge from the Dow or EURUSD that may never come with our current backdrop, I’m watching markets and setups with a staging of more moderate measure. Take GBPUSD for example. On the fundamental side, the docket is fairly dense over the next 24 hours with the June readings of UK GDP, trade and industrial production among other reading – along with the US PPI. That can stir enough volatility in these thin markets for a short charge, which finds an established range up to 1.4000 and more ambitious bearish scope down to 1.3600 which is still well within liquidity scope. 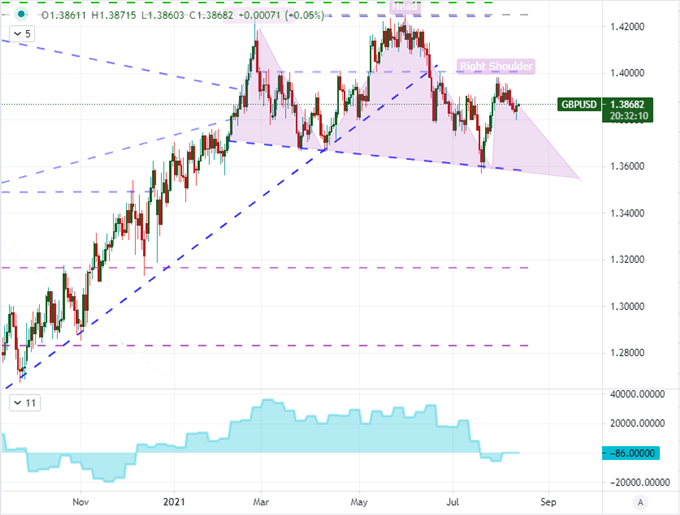 The general market illiquidity can amplify the unique restriction on a couple liquid emerging market currency crosses Thursday. Both the Mexican and Turkish central banks are due to announce policy ahead. Expectations are not hard set to change their policy settings, but there is significant capacity for both groups to surprise. Turkey’s policy authority was installed specifically because the President believed the country’s benchmark rate was too high at 19 percent, but the new central banker has delayed cuts seemingly until inflation moderates. As for the Mexican group, the economist consensus has actually edged up to price in another 25 basis point rate hike which would bring the benchmark up to 4.50 percent. If that were to occur, it would be a yield advantage to the Peso, but it would work against general hawkish expectations for the Fed – not as robust but enough to dampen an MXN rally. On the other hand, if they were to hold; USDMXN could see a bigger rally with a technical break. 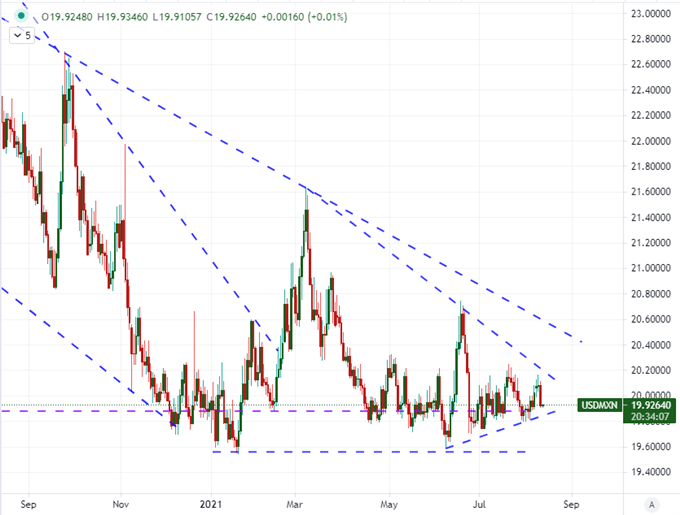