I am like many traders in that I look for some degree of volatility and market movement to present the kind of opportunities that suit my approach. Generally, I am a medium-term swing trader with a time frame on setups that usually spans 2 days to 2 weeks. However, productive moves over that time frame usually entails larger swings in price action than what we have seen these past months. When faced with difficult conditions, desire can start to override rational analysis; and impractical expectations start to arise. The S&P 500’s inability to make a productive drive despite its staging at record highs is a little easier to appreciate given how long it has struggled for progress. Over the past three days, the benchmark’s range and volatility through ATR (both as a ratio of spot) have dropped back to the lowest levels since the December holiday period of 2019. 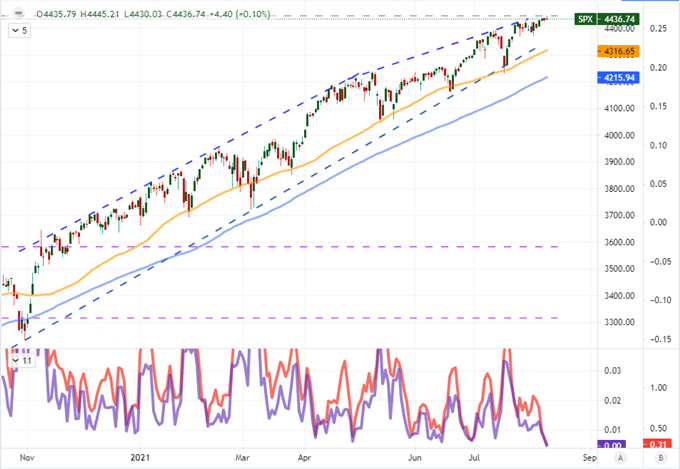 It is understandable against this backdrop of hope for the eventual change in these market conditions that speculators were reading into the recent collapse in gold a seismic shift – for this particular asset if not the entire market. Between the Friday’s NFPs-induced tumble and Monday’s ‘flash crash’, the metal dropped as much as 7 percent in the span of less than 48 hours. The break through 1,760 trendline support would only further the expectations, and Monday’s sharp reversal wouldn’t dissuade conviction as volatility is the target and not trend. However, the outlier theory is difficult to hold out for through this past session’s activity. Through the moderation of price, volume barely budged, the bounce added 1,675 support as a backdrop and Tuesday’s trading range moved right back to the average scale we have averaged over the previous months. The volatility was good while it lasted, but I am maintaining my dubiety. 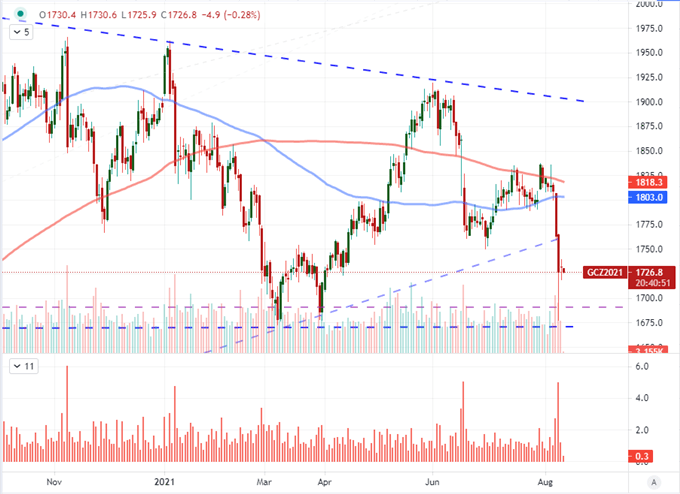 It is important not to let specific examples stand in for the context of the broader market. That is a recipe for falling back into the trap of assuming easy and convenient exceptions to the rule. Broadly speaking, the markets are running through seasonally-exaggerated doldrums, compounding the kind of grind that seems to occur when cycles move into the latter stage of a mature bull. Therefore, I will evaluate situations where the potential seems to be an exceptional break or trend with greater scrutiny than situations that are oriented towards congestion – either ranges or very measured trends. 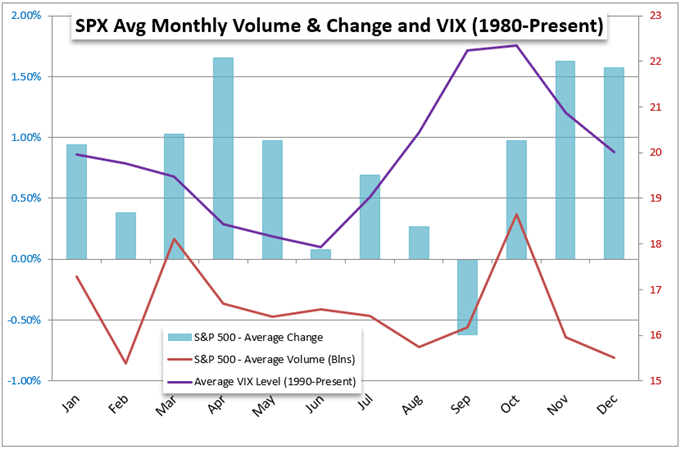 The Next Rabbit to Chase: EURUSD

I started with my general perspective of market conditions before I addressed yet another situation where the technicals and fundamentals could be interpreted as loaded in different environments. EURUSD has extended an impressive 8 consecutive trading day slide to match the longest drop for the benchmark pair since December 12, 2017 – and there are only a handful of comparable bear moves over the past decade. Despite the consistency, the pace leaves much to be desired, but the presence of the 1.1700 figure is generating technical interest while the presence of Wednesday’s US CPI release raises the potential of an acute catalyst. In this scenario, a range move would be more productive, but not by much. 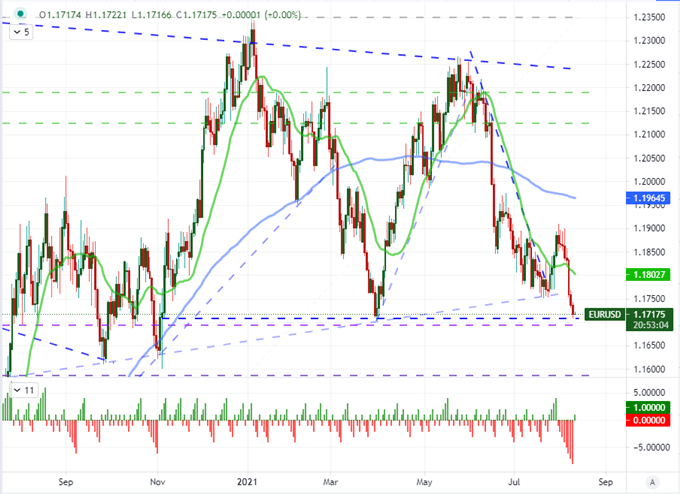 Given this scenario, I decided to ask traders on Twitter what they expected the next stage could bring for this pair. Between three option – a bullish range reversal; bearish breakdown and neutral – the majority still chose the breakdown as their anticipated outcome. It is true that I didn’t qualify it as a ‘productive’ breakdown, which would insinuate meaningful follow through; but many assume that naturally follows. 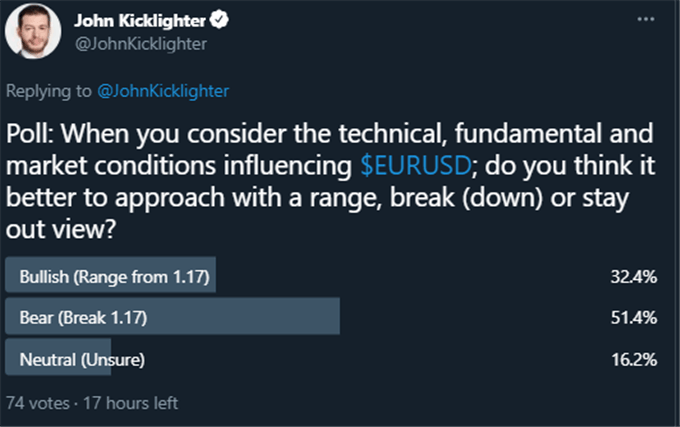 Alternatively, the actual positioning of retail FX traders with IG shows a very different perspective on what is likely to happen next for EURUSD. With two-thirds of the more than 4,000 traders holding an open position on the cross holding a long view, it seems anticipation for a range outcome is greater. That said, it doesn’t speak to what kind of move these bulls are expecting should the barrier hold. Often, we treat this positioning data as a contrarian indicator when at extremes, but the default of retail traders to trade off of overt technical levels and to fight trends may better be suited for current market conditions. 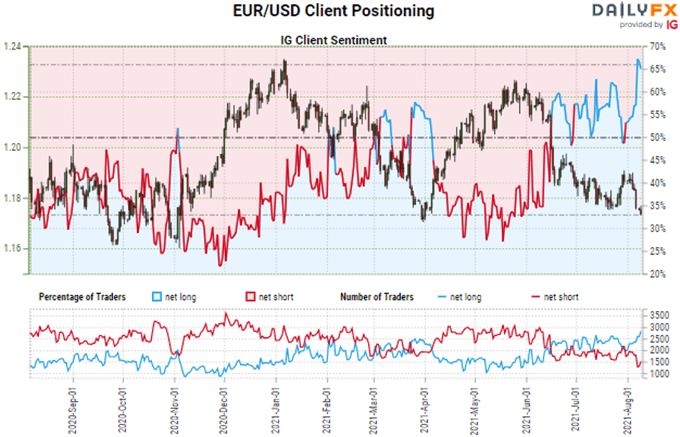 The Caveat: The US CPI Release

Now, while I do believe the market is predisposed to hold to a controlled tempo whether EURUSD makes a next move higher or lower, there is potential to stir some volatility – even briefly. While there is plenty of event risk on tap, it seems most market participants have come to terms with the reality that most catalysts are not going to produce significant movement. Yet, where anticipation may build beyond the skepticism a little more emphatically is with the upcoming US inflation report. The 12:30 GMT release of the consumer price index report for the month of July represents a black-and-white update on Fed policy potential from the market’s favorite inflation figure. Momentum has built up from the NFPs beat on Friday, Bostic’s overtly hawkish remarks on Monday and even Chicago Fed President Evan’s comments on Tuesday.

This past session, Evans, who I would consider one of the FOMC’s most dovish members, noted that he could support a taper after a few more months of robust job reports. The scale of expectations from this group generally supports a reduction in asset purchases (which precedes a hike) in the coming months. The particulars of the vote count and data can make that a September/October event or November/December occurrence. Given how far the Fed’s influence stretches through the global financial system, the CPI data could readily be read into. 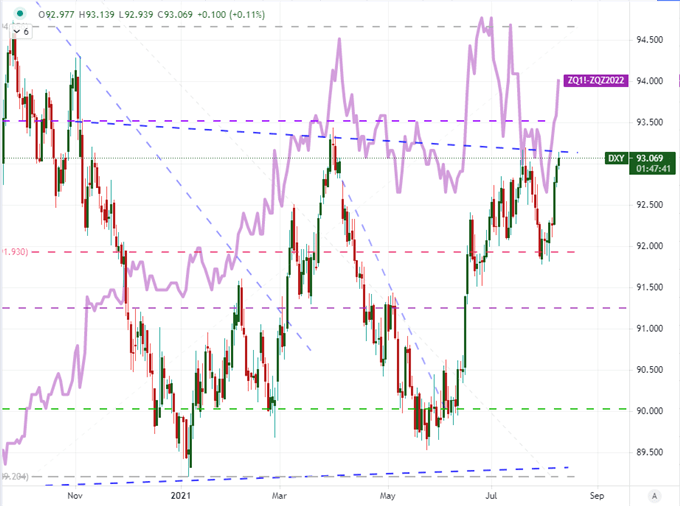